A cozy pie has always been the ultimate comfort food in my family’s Southern kitchen. Instead of sweet, we’ve gone savory with a meat and potato based beef pot pie. Infused with Irish tradition & flavor, this steak & Guinness pie is an effortless dinner that feels fancy making it fit to grace the supper table for any occasion throughout the year. 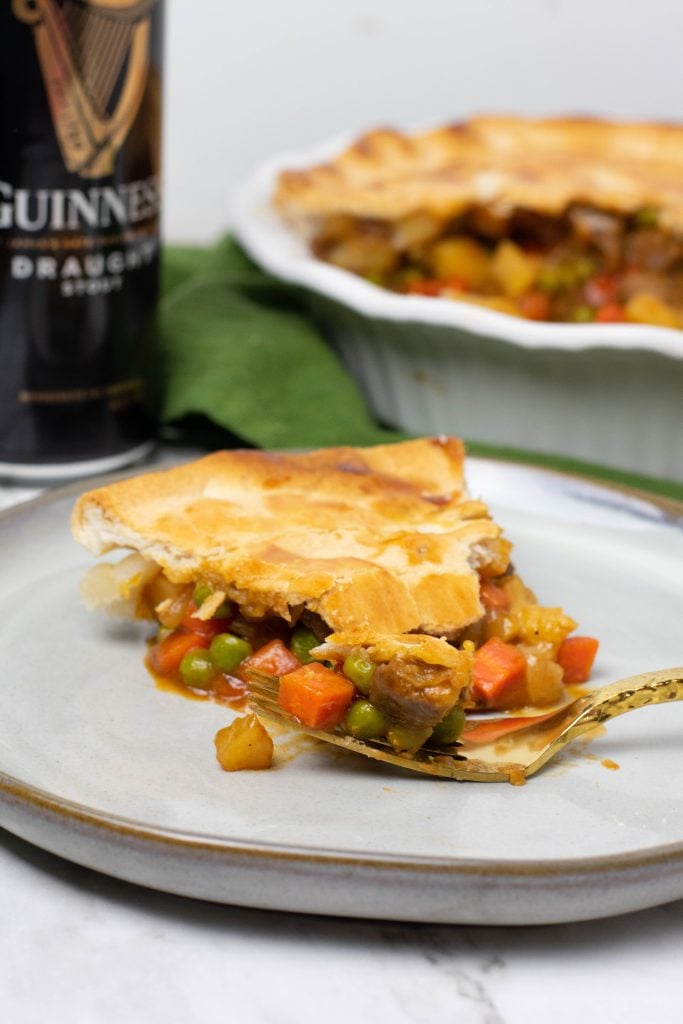 This is the second of this year’s recipe trilogy in honor of Saint Patrick’s day.

Guinness got just about everything right with their traditional stout, but one thing my father never told me as he slowly sipped it from an ice cold mug, is that it could be so much more than just a relaxing night cap.

Last year we introduced you to our easy crockpot Guinness beef stew. 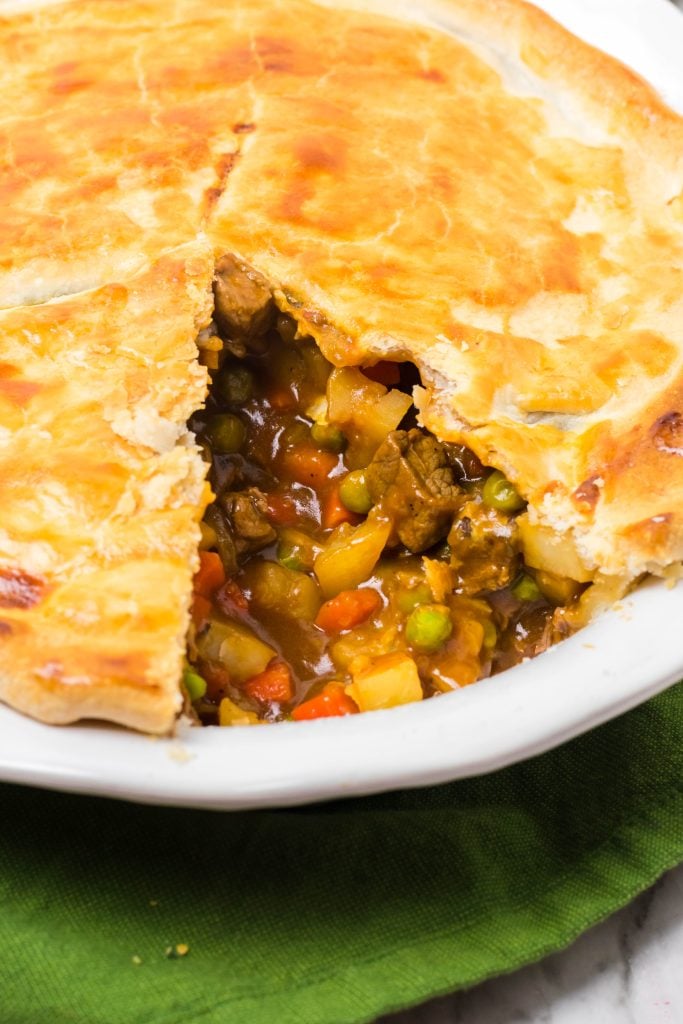 This year we built on that idea and decided to put it in possibly the best dinner pie of all time. A steak filled pie. A real meat and potatoes dinner, but stuffed between layers of buttery pastry dough.

Steak and Guinness Pie is rich, it’s hearty, and embraces one of the tastiest Irish dinners of all time.

Merging a beef pot pie with the tenderizing and fortifying flavors of Guinness stout is pure genius. 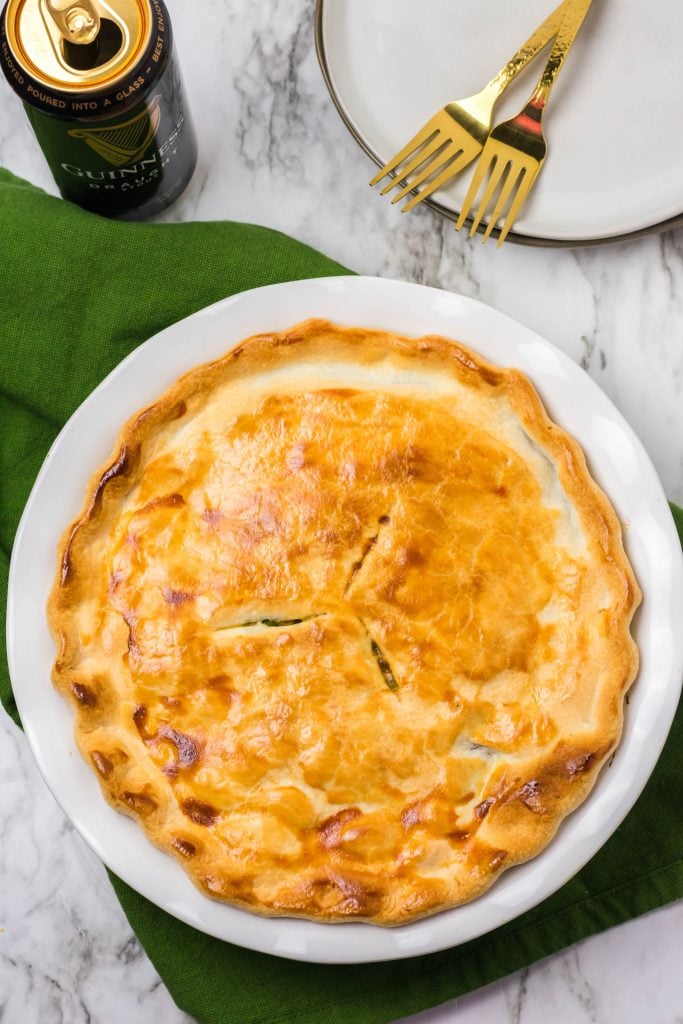 Fast forward 20 years, and you’ve got my kids who don’t see me sipping on an ice cold brew so much as putting it in their food. And then they freak out, like they’re doing something naughty by consuming a dish with ‘alcohol’ in it.

And I’m over here like, ‘Little people, do you really think I would serve you something bad for you, let alone illegal?’ 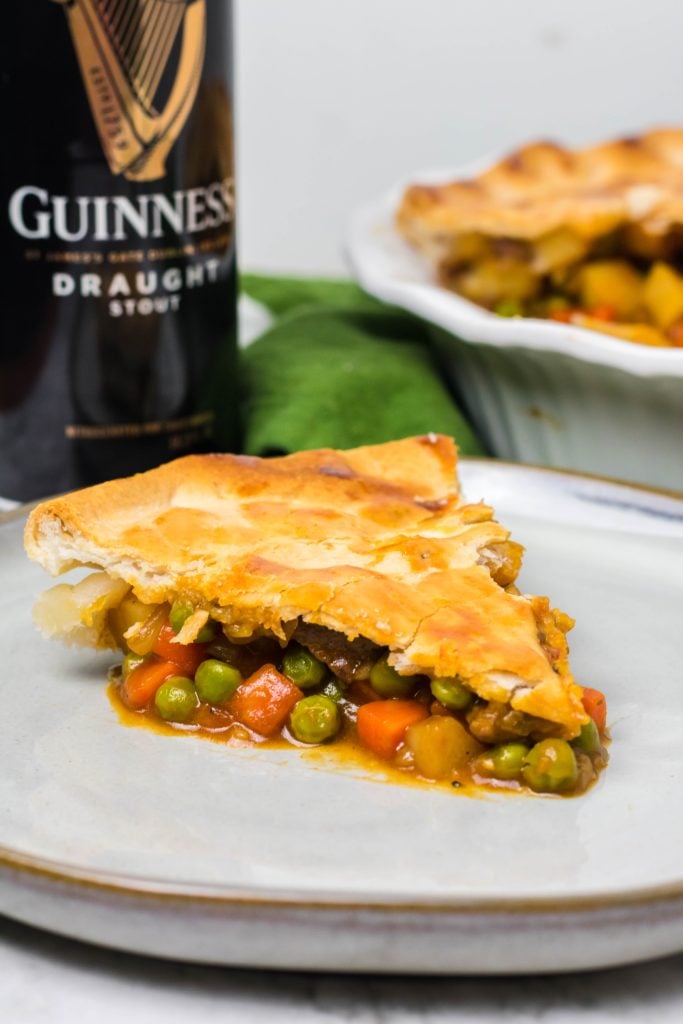 They still don’t really believe me that the intoxicating bit all cooks off long before it’s served to them, but I continue to assure them that it does.

Meaning that all dishes cooked & consumed in Mama’s kitchen are harmless and well within the limits of the law. They just might be a tad bit more flavorful than other versions.

Personally, I think they just like to talk about it because their friends might think they’re cool or something. Silly boys, but kids will be kids- or so they say. 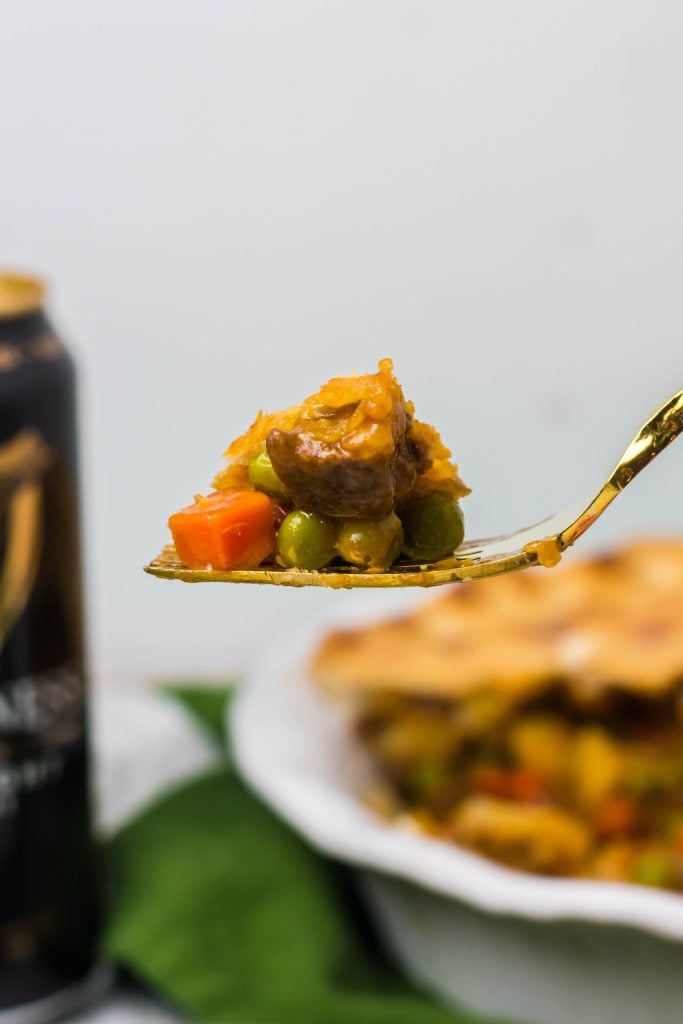 Why Is This Savory Dinner Dish Called A Pie Anyway?

Cooked off alcohol aside, this pie combines two thing’s Ireland’s famous for, their beef and their beer although ours does have a decidedly American bent.

It’s all brought together in a convenient dish that’s as rustic looking as it is good.

This thing is basically a family sized pot pie, but with beef. And not just any beef, quality beef like steak instead of the more traditional ground beef or scraps. It even bakes in it’s own rich gravy that’s created thanks to a little help from that hearty beer those Irish are so famous for.

All the hearty beef stew flavors you’re familiar with are another thing this pie tends to remind everyone of, but enriched with the deep Guinness flavor that also tenderizes the meat until it melts in your mouth. So it really does have a purpose, in addition to just depth of flavor and overall taste.

The word pie as we know it refers to a dish baked up under a rich pastry crust, but they don’t have to be sweet- they absolutely can be savory too. And that’s exactly what we’ve done with this savory steak & Guinness pie version.

Instead of just topping it with a crackling crust though, we went old school and lined the dish with pie crust as well.

With two layers of crust sandwiching the filling, it makes it feel more indulgent. It also makes slicing and serving easier, neater, and prettier. 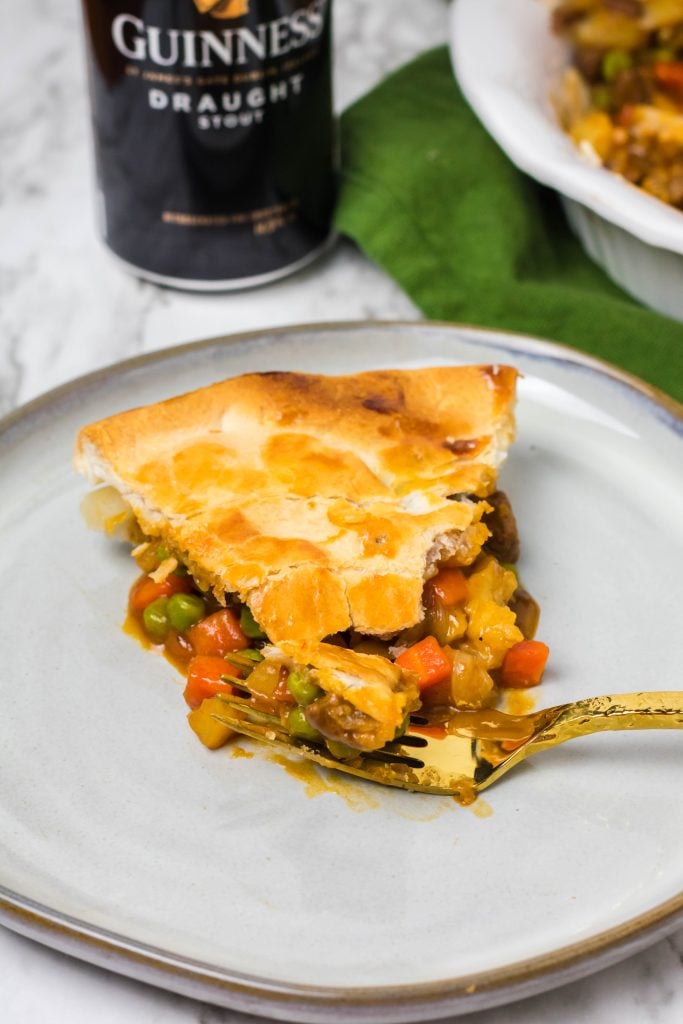 While this recipe may have more steps than the average one we post, it’s still relatively simple. That being said, there’s always a couple of helpful hints to ensure you have the most success when making it yourself. 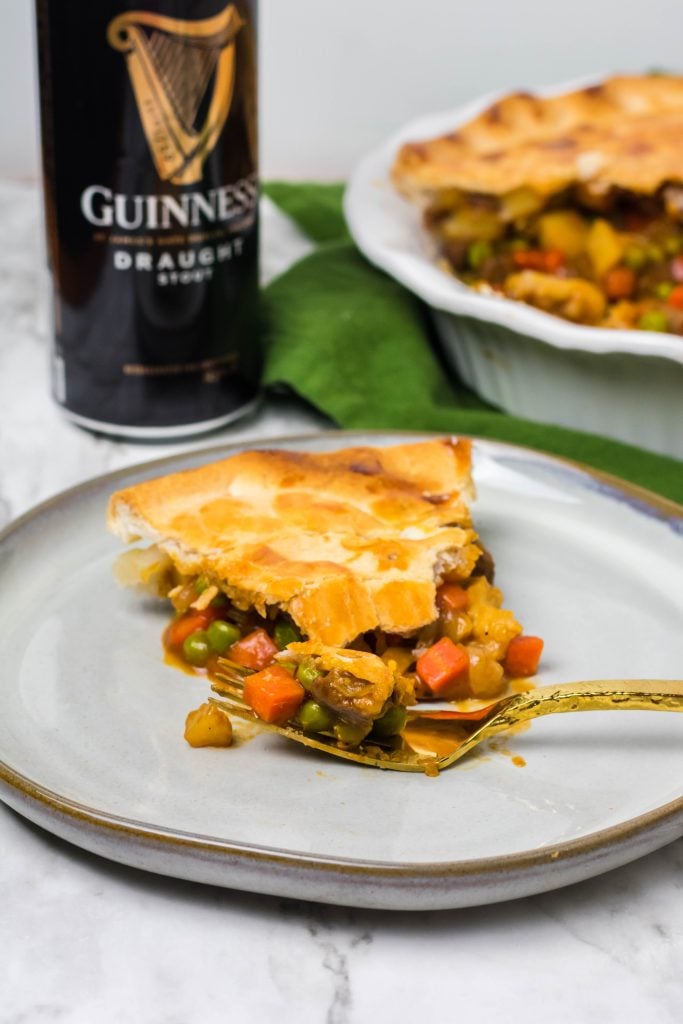 It’s the perfect dinner to savor on Saint Patrick’s day, but so good we keep it in the regular recipe rotation. It will definitely warm the family up and help get the conversation flowing on chilly evenings. Pair each slice with a hunk of our crusty traditional Irish soda bread for a tasty traditional meal that has stood the test of time!

Looking For More Irish Inspired Recipes? Check These Out Before You Go

If you’ve tried this STEAK & GUINNESS POT PIE, or any other recipe on the site, let me know in the comment section how it turned out, we love hearing from our readers! You can also follow along with me on PINTEREST, FACEBOOK, and INSTAGRAM to see more amazing recipes and whatever else we’ve got going on! 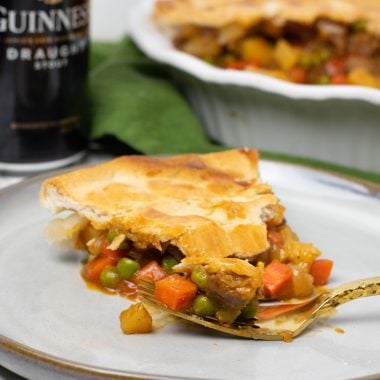 If you have leftover stew after filling your pie, eat it as is or you can save it to make into a smaller pot pie. It also freezes well.