When warmer weather rolls around, my desserts get creamier and colder. Indulge in a fun recipe the whole family will love with a big bowl of this no churn fruity pebble ice cream. It’s the best of both breakfast & dessert, and sure to satisfy even the biggest sweet tooth’s craving. 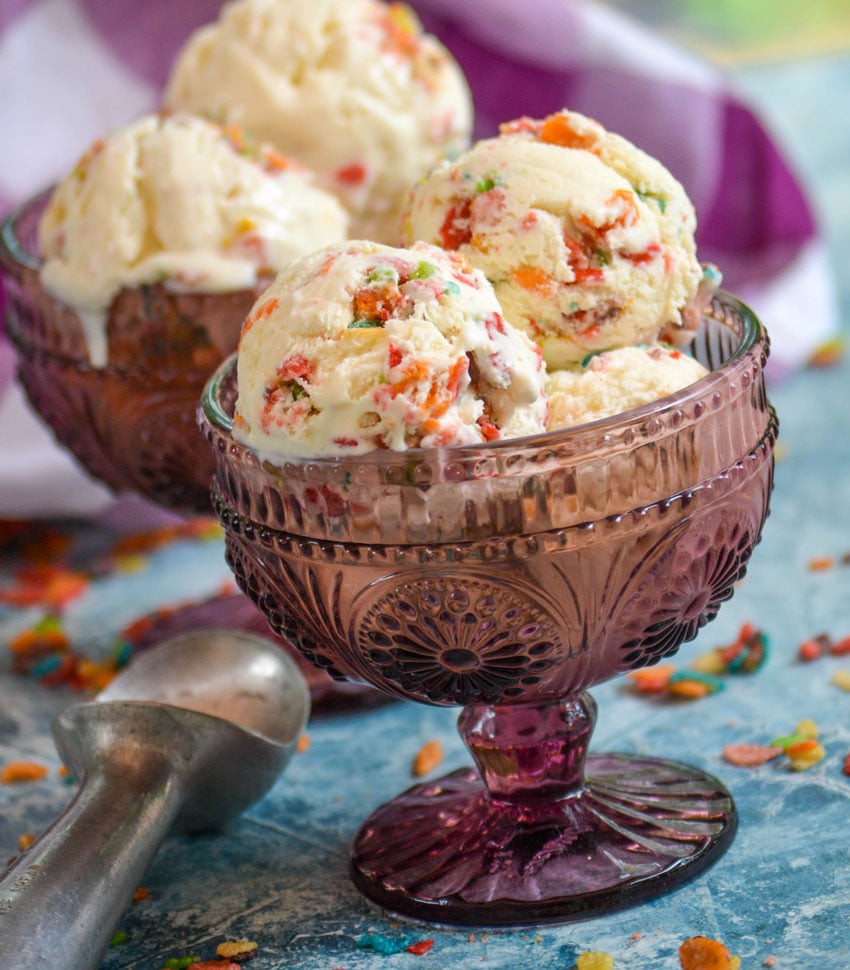 So when I was pregnant, I didn’t crave a wide variety of things. Those things I did crave- well get out of my way or it was gonna be bad.

I don’t really do sweets still to this day, but every now and then an intense craving will still strike for that milk & cereal combo. These milk and cereal breakfast pops with fruity pebbles being a perfect example.

I just can’t help it. 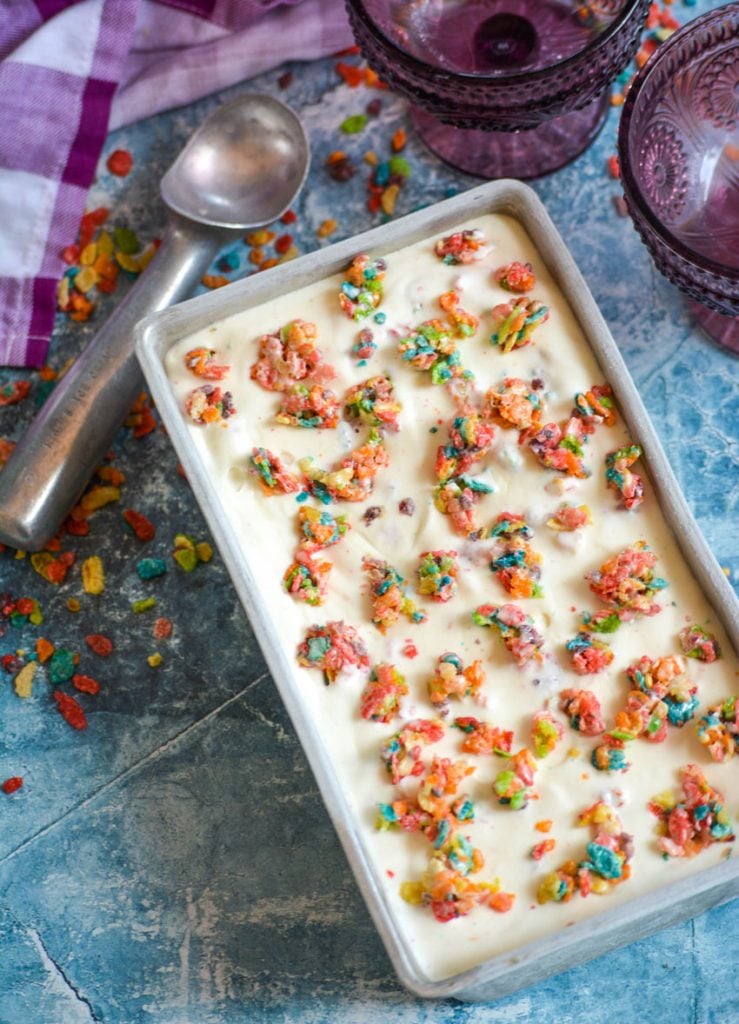 I had pretty much forgotten about all of that, other than with nostalgic perusals of my sons’ baby book every year around his birthday.

Then my best friend got pregnant. That brought it all flooding back.

I don’t even remember how the conversation started, but it ended with her lamenting on how much she’d love a cold bowl of fruity pebbles.

She was also due in July. This was in May, but it was still hot and naturally ice cream came into play.

She about lost her mind when the two ideas connected in her pregnant brain.

I mean, it is a genius idea. But my bff was also pregnant and needed a fix so it was imperative I find a solution. 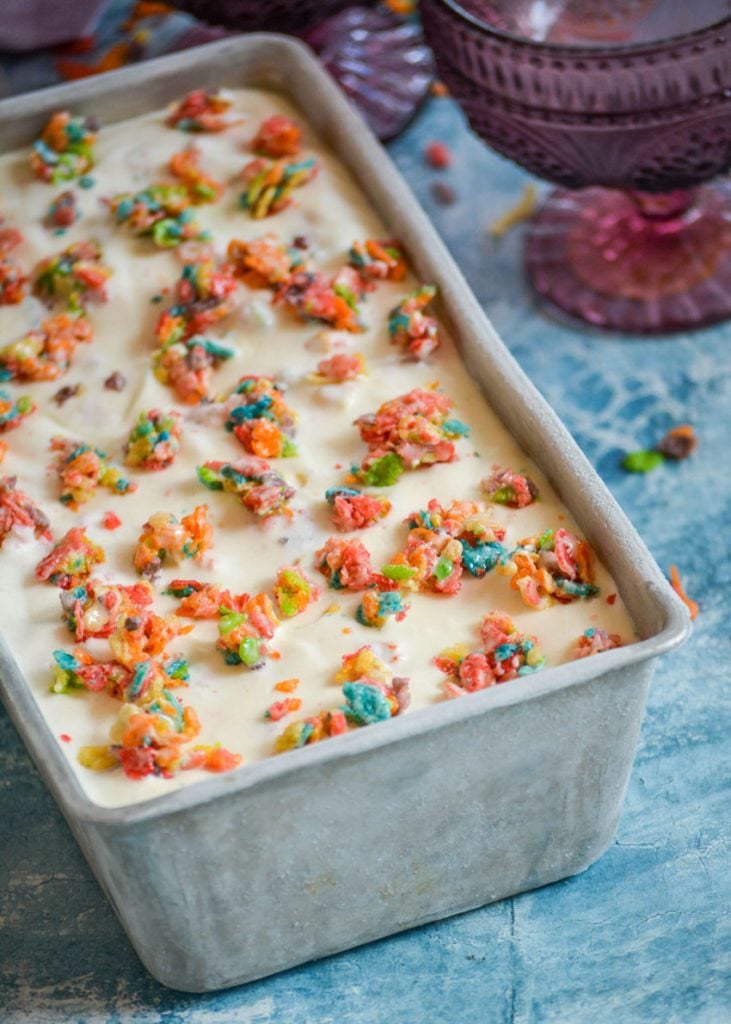 Why No Churn Ice Cream?

And it had to be quick. Not just for her, but when the craving hits- who wants to wait around for their ice cream?

Unlike traditional ice creams, no churn ice creams do not require an ice cream maker. This makes them affordable and easy for those on a budget. Just a couple steps and your ice cream base is ready.

I will tell you though that no churn ice creams tend to be on the sweeter side than more traditional versions. Great for those with a major sweet tooth!

They’re also on the softer side, meaning they take longer to freeze. Nothing wrong with that though, just make sure you plan accordingly.

How Long Should I Freeze No Churn Ice Cream?

Ideally no churn ice cream should freeze until firm, this takes at least 4-5 hours. For best results, my ideal freeze time is typically at least 8 hours or overnight.

Just make sure it’s stored in an air tight container with a sealed lid while freezing to prevent any freezer burn.

The ice cream will seem harder than a traditional version when removed from the freezer, but in about 60 seconds will have softened enough to easily scoop into bowls. 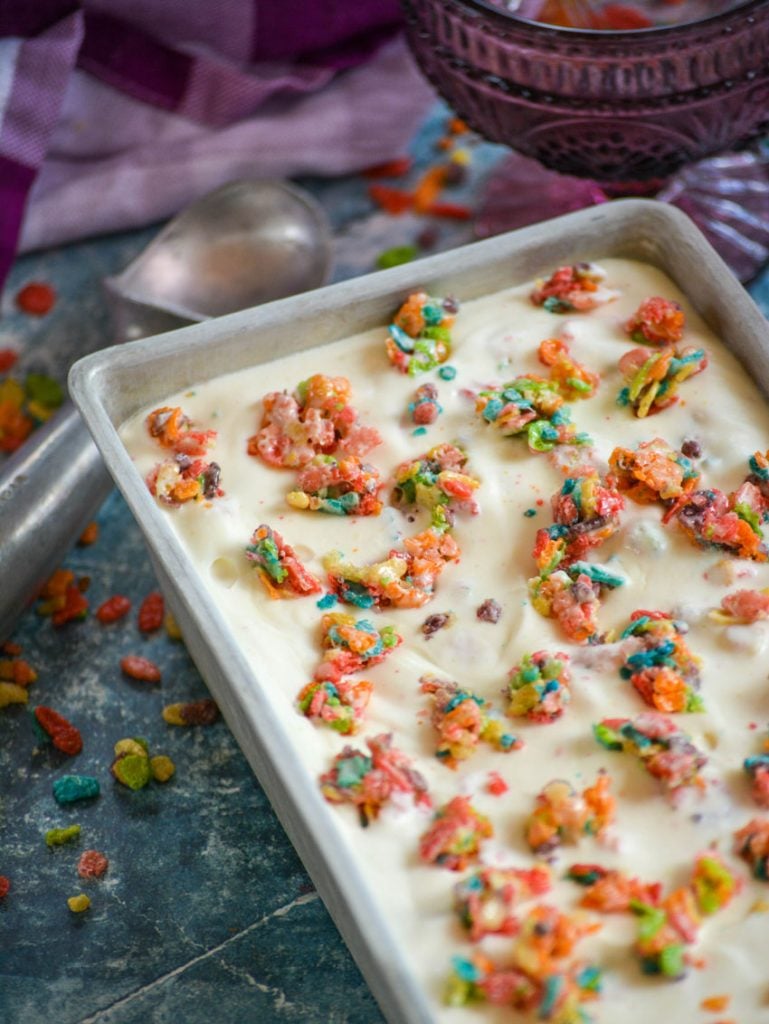 Making A No Churn Ice Cream Base Recipe

Believe it or not, there’s actually some simple science behind tasty no churn ice cream and why it works.

Traditional ice cream’s are churned, and during the long churning process air is constantly incorporated eventually whipping it into a light fluffy base.

The no churn version shortens this step by using whipping cream. The cream is whisked in a stand mixer until air’s incorporated increasing it’s volume and fluffiness until stiff peaks have formed.

Same principle at work. Be careful not to over whip your cream, otherwise it will separate dividing into a butter ball and whey.

The next step is to fold in a can of sweetened condensed milk. There’s a two part reason why this second ingredient is absolutely necessary to rounding out a no churn ice cream base.

Remember earlier when I mentioned how sweet the condensed milk is? That high sugar content actually serves a purpose. Lowering the freezing point of the mixture,  so that even when it freezes it won’t become completely hard like a brick.

The second part has to do with the condensed bit- meaning the milk’s been cooked down and excess water evaporated. This will prevent the formation of ice crystals while the mixture freezes.

The end result? A rich, creamy ice cream base that’s waiting & ready to take on any flavor profile you can mix in to it. 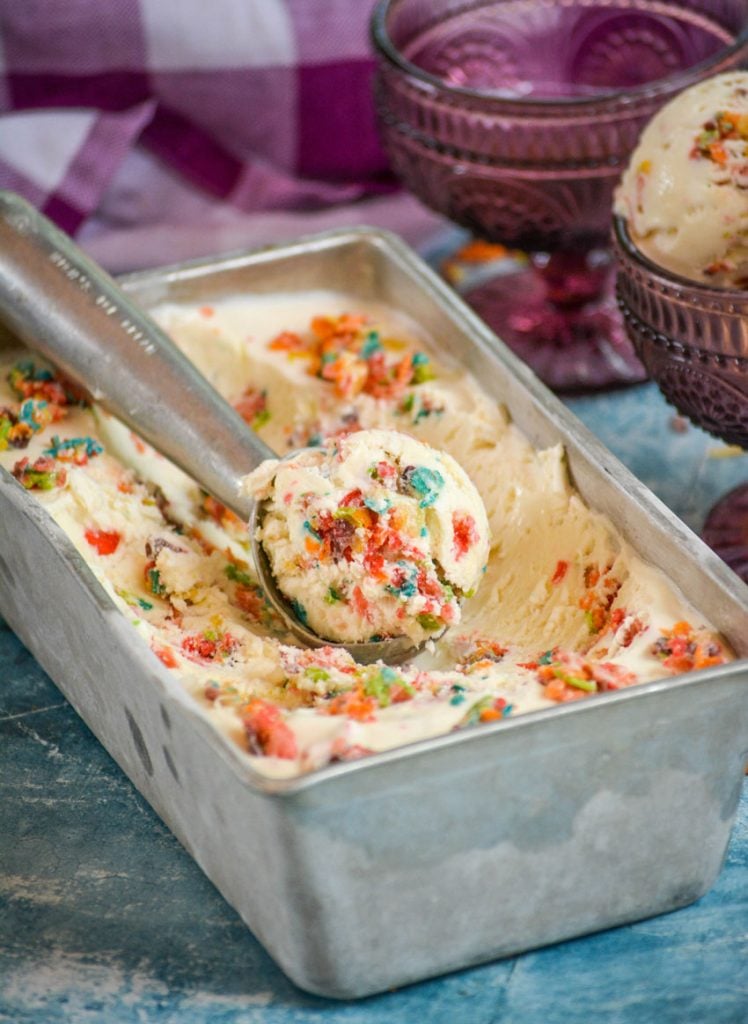 It would’ve been simple to just throw some fruity pebbles cereal into this ice cream and call it a day. Sure it would’ve taste good, but we weren’t just going for good.

We were going for great!

With that in mind, we decided several things were important. First, to allow cereal to sit in the cream for a few minutes before incorporating to really infuse it with fruity pebble flavor.

The soggy cereal is scooped out and discarded, with a bit of extra cream added to bring us back up to the two cup measurement mark.

The cream in then whipped in the bowl of a stand mixer until stiff peaks have formed. Watch it carefully to prevent separation.

This should take roughly three minutes when beaten at high speed. Make sure to use the whisk attachment.

Using a spatula fold in the condensed milk until evenly incorporated.

Do not be tempted to just whip it in using the whisk and the mixer. This is a sure way to breakdown the fluffy cream ice cream base.

Refrigerate the ice cream base until ready to use.

Now it’s time to make the magical flavor nuggets that will be in every bite of ice cream- the fruity pebble cereal clusters.

In a large skillet, melt the butter and marshmallows together. Stir until smooth and the mixture’s completely melted & smooth.

Lightly spray a spatula with non stick cooking spray, and use it to fold the cereal into the marshmallow mixture. Stir until evenly incorporated.

Turn the cereal mixture out onto the prepared surface. Use the spatula to spread the mixture out and flatten it.

Place the tray flat in the freezer, for 15-20 minutes, until the mixture’s hardened. Break the mixture up into pebble-sized clusters.

Remove the ice cream mixture from the refrigerator, and stir most of the clusters into it to evenly incorporate.

Transfer the mixture to a metal 9×5″ loaf pan. Smooth out the top, and then top with the remaining cereal clusters.

Cover the pan tightly with cling wrap. Make sure it’s secure, then freeze the fruity pebble ice cream for at least 5-6 hours but up to overnight before serving. 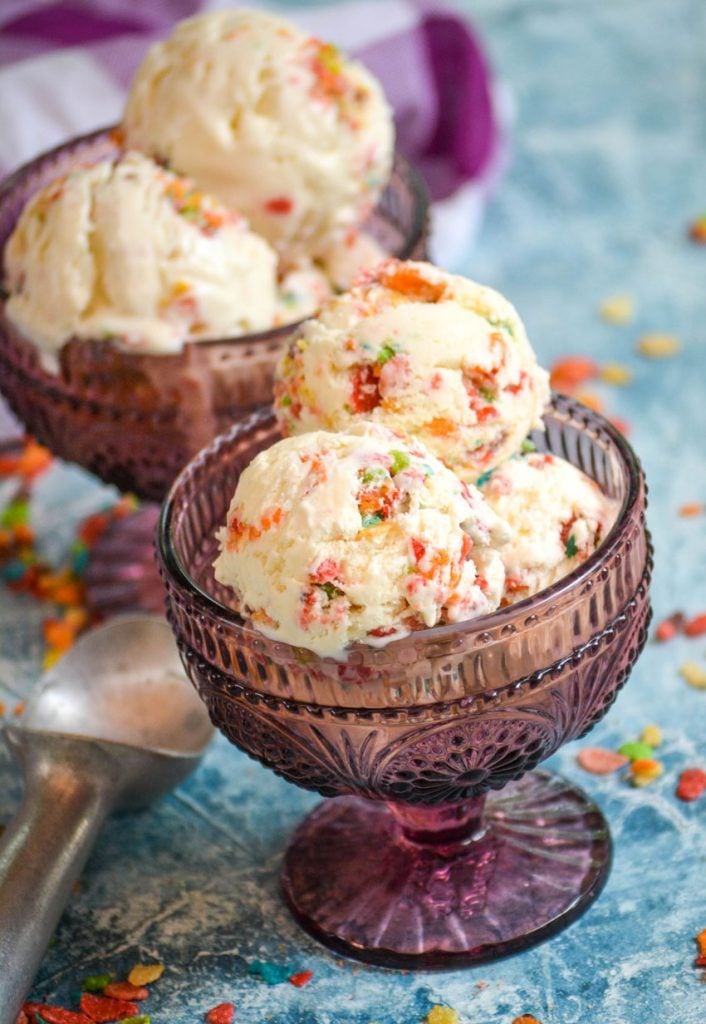 Pregnant or not, some cobinations are flat out genius. That includes fruity pebbles cereal + rich, creamy soft serve.

Make your own dessert at home, and have fun with it two by adding a little bit of breakfast into your dessert bowl with this fun, flavorful no churn fruity pebble ice cream!

If you’ve tried this NO CHURN FRUITY PEBBLE ICE CREAM, or any other recipe on my site, let me know in the comment section how it turned out, we love hearing from our readers! You can also follow along with me on PINTEREST, FACEBOOK, and INSTAGRAM to see more amazing recipes and whatever else we’ve got going on! 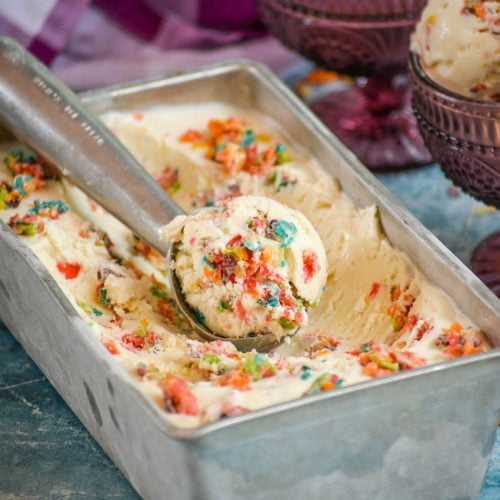 When warmer weather rolls around, my desserts get creamier and colder. Indulge in a fun recipe the whole family will love with a big bowl of this no churn fruity pebble ice cream. It's the best of both breakfast & dessert, and sure to satisfy even the biggest sweet tooth's craving.
5 from 3 votes
Print Pin Rate
Prep Time: 30 minutes
Cook Time: 5 hours
Total Time: 5 hours 30 minutes
Servings: 6
Author: Meaghan @ 4 Sons R Us

For The Ice Cream

For The Crunchy Fruity Pebble Clusters

To Make The Crunchy Clusters