Homemade sweetened condensed milk is an easy recipe to whip up, for any level of home cook. It’s thick, creamy & luscious just like it’s canned store-bought counter part, but with half the sugar. This basic recipe is one you’ll want to keep on hand in the family recipe box, to use & share over and over again! 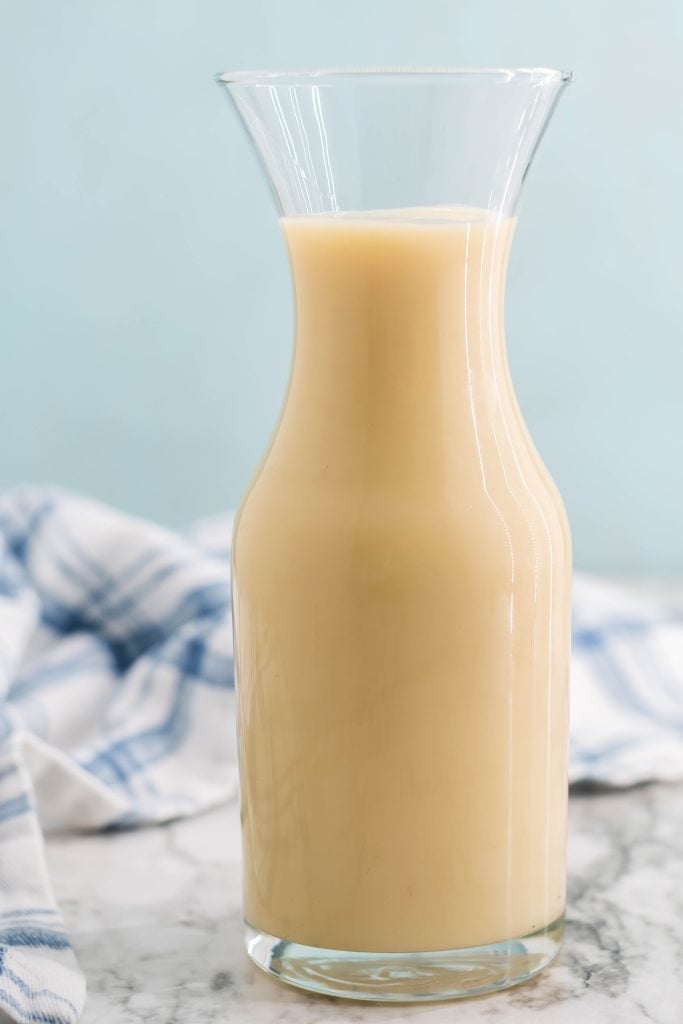 I could not live without coffee.

The morning that I awoke to discover the creamer was all gone, was a nightmare of epic proportions.

I was in a daze, wondering who had sabotaged my morning routine.

I mean, it must have been sabotage, because there was no way I would have forgotten to add creamer to the grocery list!

I had milk. I had sugar. I had vanilla.

I tried it, and it just wasn’t cutting it.

I just had to have the smooth, creamy start to my day.

As Plato pointed out so long ago, “Necessity is the mother of invention.”

In a moment of inspiration I ran to my computer and immediately began Google-ing a homemade coffee creamer recipe.

Every recipe I found called for condensed milk.

Crap! I was out of that too!

I was saved by the bell when another search pointed out it was relatively easy to make that at home too. 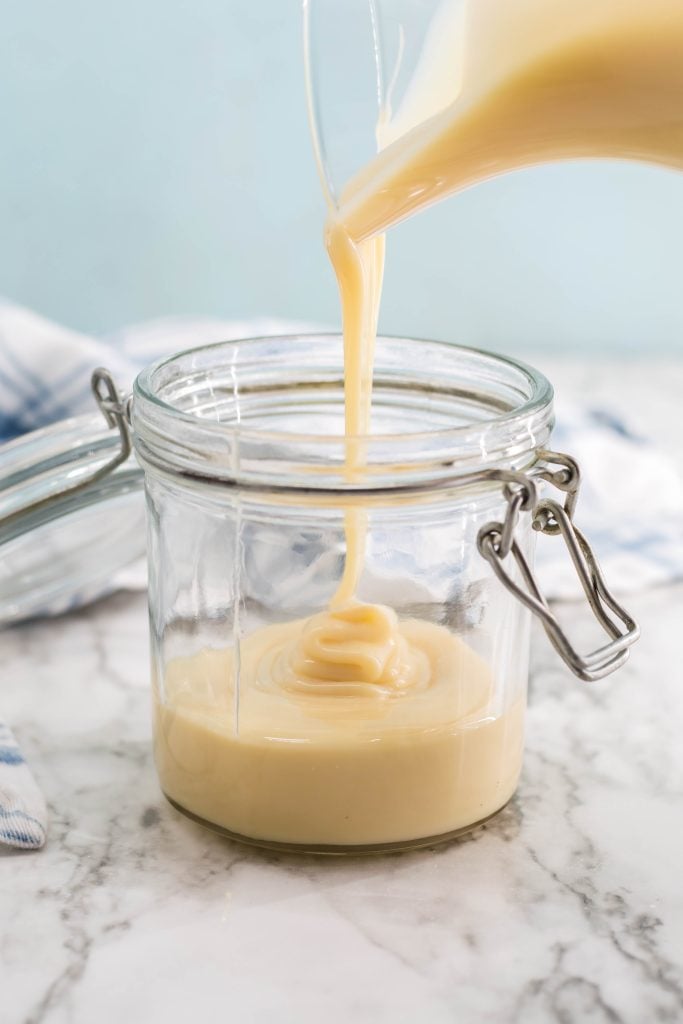 Two hours later, I had fresh, homemade condensed milk and was finally on my way to enjoying my first cup of coffee.

And you can too! You may find you actually prefer it since it’s so easy to whip up.

All thanks to this homemade condensed milk recipe.

To make it you only need three ingredients. Three!

That’s it. Simple ingredients most families keep on hand. 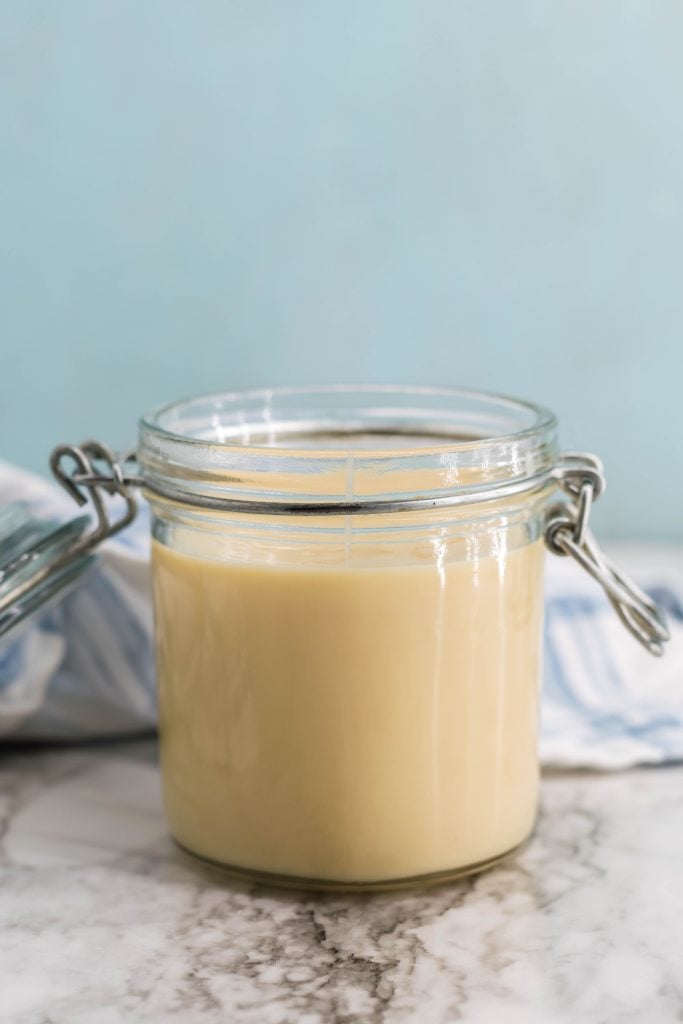 How Is Condensed Milk Made?

Whipping it up is just as easy, although it does take a bit of time & patience.

Condensed milk is made by removing most of the water from cow’s milk.

This process leaves behind a thick, dense creamy liquid that’s then sweetened and canned.

To do this at home, start with a full liter of whole milk.

The fat content is important as this leads to the thick, creamy result.

So don’t be tempted to opt for skim milk instead.

Start by adding the milk and granulated sugar both to a large heavy bottomed pot.

I like using my cast iron enameled dutch oven for this.

Stir them together to mix, and then bring the mixture to a boil over medium heat.

It will come to a boil, but it will be slower than if you were doing it over high heat. However, we don’t want to scorch and burn the milk.

Once the mixture reaches a full boil, reduce the heat to low and let it simmer for roughly 2 hours- or until the amount has reduced by half.

This will happen as the water evaporates and cooks out. 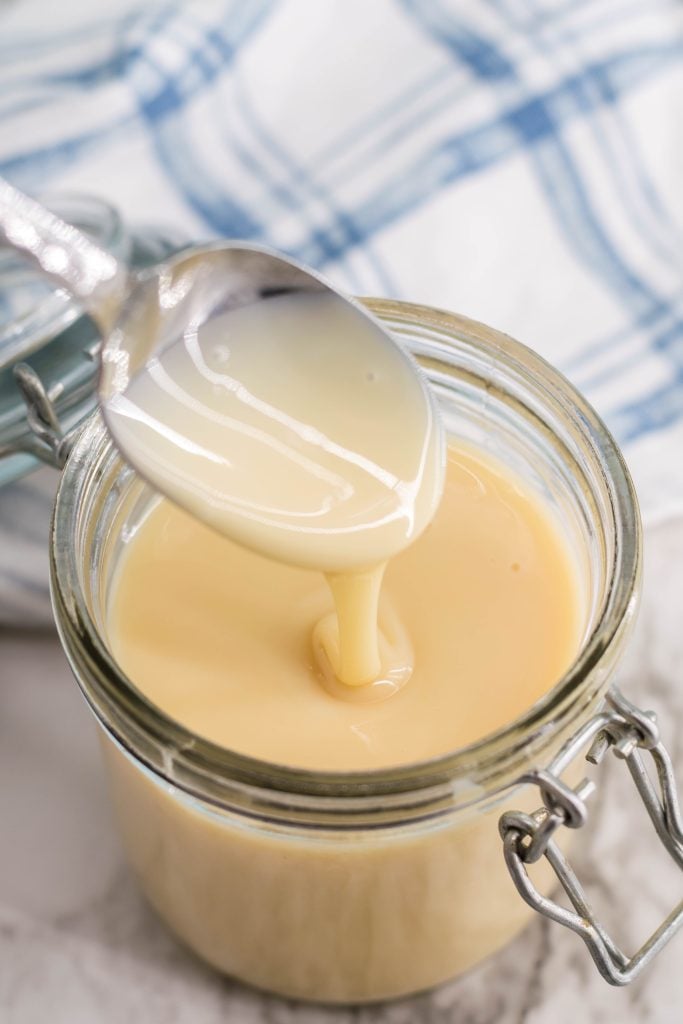 Unfortunately, while this homemade condensed milk recipe is easy- it isn’t one you can walk away from. At least not for long.

The milk mixture should never be allowed to boil, so you may have to adjust the temperature several times until it’s just right.

A low, slow simmer is exactly what you want to maintain at all times.

Also, you’ll want to set a timmer so you’re reminded to stir it every 15 minutes or so for the duration it cooks.

This prevents a skin/film from forming on the top that won’t easily be incorporated back into it.

Nothing too involved, but definitely needs a little babysitting.

With a little preparation, and planning ahead it’s easily doable.

After the condensed milk has reduced by half, stir in the butter.

Once the butter’s completely incorporated, remove the pot from heat, and set it aside.

Allow the mixture to cool completely before using or jarring. 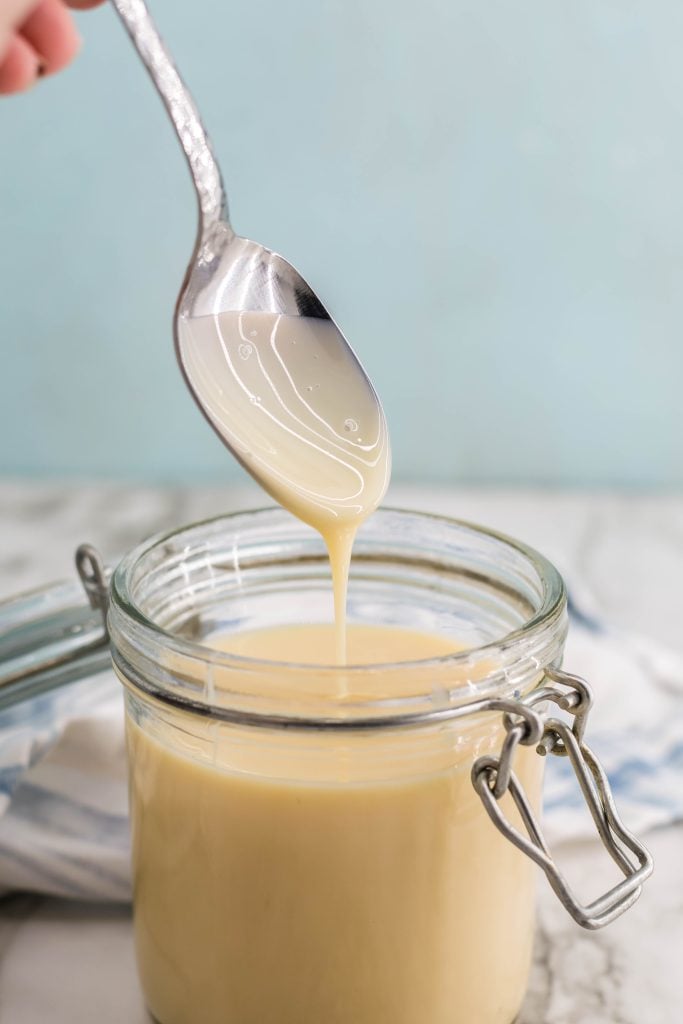 What Can I Do With It?

Since then, I keep tend to keep a batch of this homemade sweetened condensed milk in the fridge for coffee creamer emergencies, and also for smoothies and baking.

It’s not hard to justify making all the baked goods when you have this on hand.

Alternatively, sweetened condensed milk is the base for almost every delicious no churn ice cream recipe ever.

You can use it to make dulche de leche, and it makes a great topping to so many things all by itself.

Store your own homemade condensed milk in an air tight refrigerator.

Homemade sweetened condensed milk can be used safely up until the expiration date on the milk you used to make it.

To remember this, I write the date in sharpie on the jar or lid of the container I’m storing it in.

Making homemade sweetened condensed milk is easy, and one of those basic recipes that every home cook should have on hand.

It works just as well as it’s store-bought counterparts, and with less than half the sugar.

Store it in the family recipe box, because this is one recipe you’re going to want to pass on and pull out many times over. 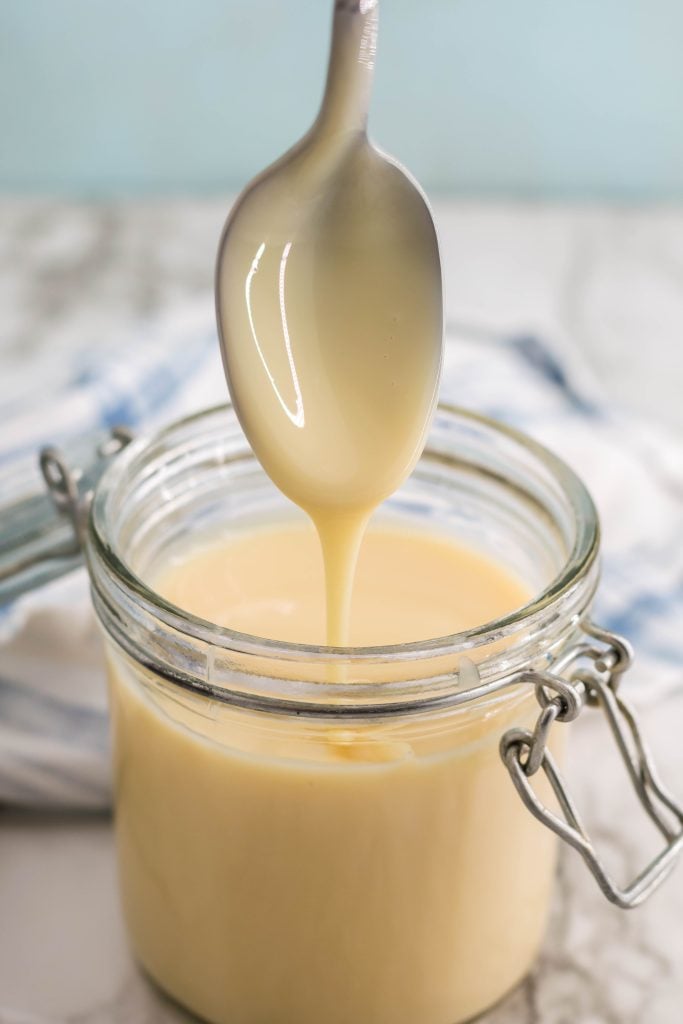 Some Of Our Favorite Desserts Using Sweetened Condensed Milk

If you’ve tried this HOMEMADE SWEETENED CONDENSED MILK, or any other recipe on the site, let me know in the comment section how it turned out, we love hearing from our readers! You can also follow along with me on PINTEREST, FACEBOOK, and INSTAGRAM to see more amazing recipes and whatever else we’ve got going on! 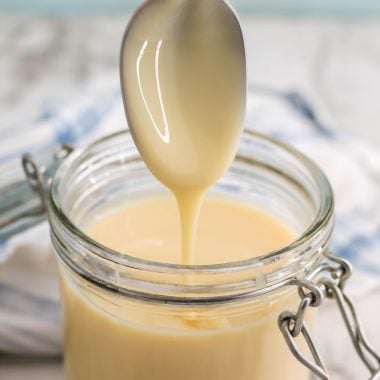 Homemade sweetened condensed milk is an easy recipe to whip up, for any level of home cook. It's thick, creamy & luscious just like it's canned store-bought counter part, but with half the sugar. This basic recipe is one you'll want to keep on hand in the family recipe box, to use & share over and over again!
5 from 1 vote
Print Pin Rate
Course: Condiment, Sauce
Cuisine: American
Prep Time: 5 minutes
Cook Time: 2 hours
Total Time: 2 hours 10 minutes
Calories: 1486kcal
Author: Meaghan @ 4 Sons R Us
Prevent your screen from going dark

When refrigerated, the homemade version has thicker consistency than the commercial one. You can add a few drops of water and whisk it lightly if desired to get a thinner mixture.