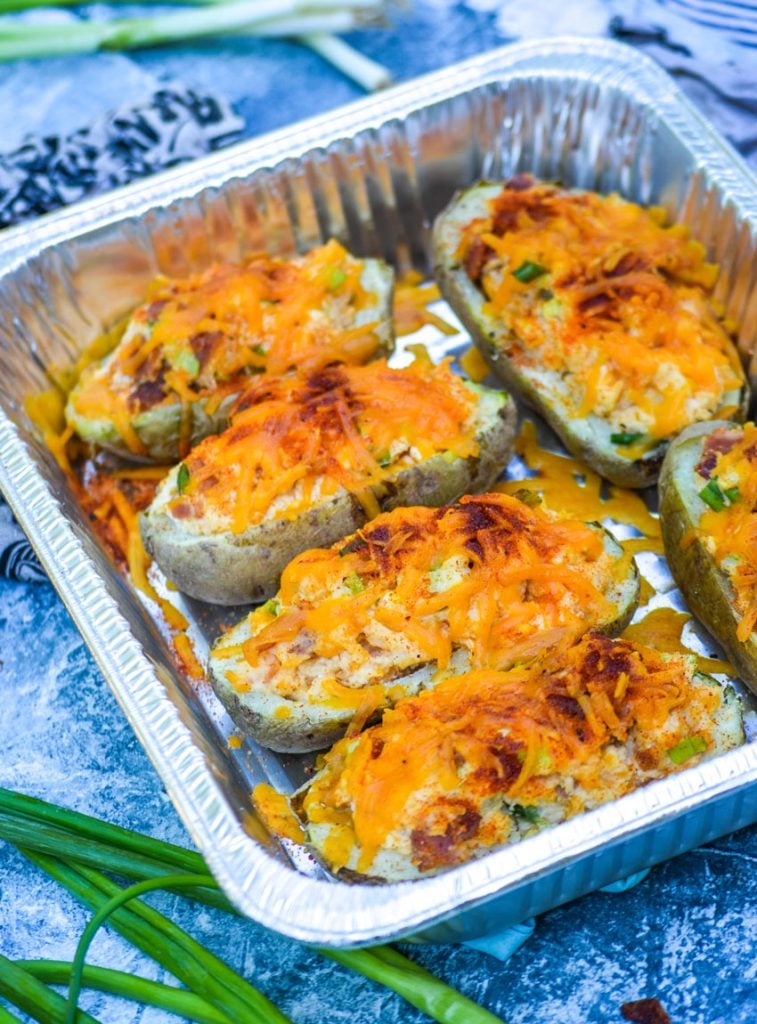 I just love a good loaded twice baked potatoes. They are like next level mashed potatoes, full of cheese and bacon.

They’re also commonly referred to as double smoked potatoes, instead of the more traditional twice baked potatoes. Whichever name you know them by- they’re an epic, delicious side dish that you need to add to your repertoire asap.

Have you ever had a smoked potato? Smoking the potatoes adds a whole extra level of flavor to potatoes. It takes them totally over the top.

Plus, I’m adding extra layers of flavor to these potatoes with barbecue rub. It makes the filling so good! Sort of like barbecue potato chips but in mashed potato form. So yummy! 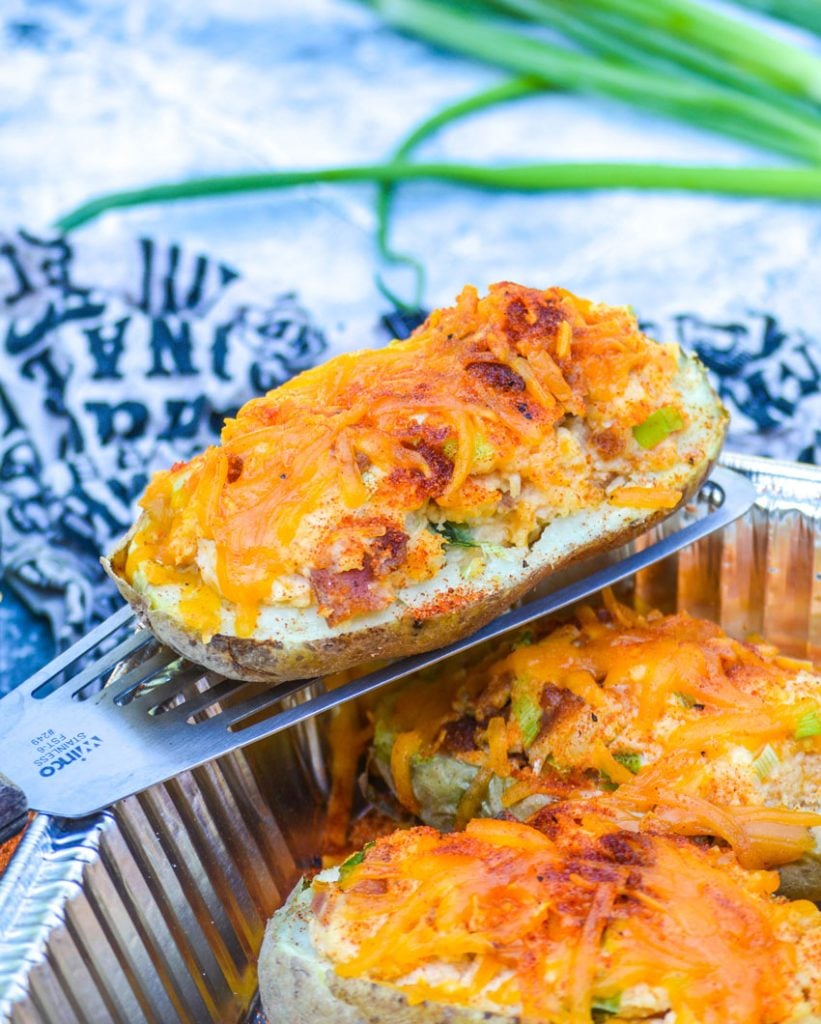 Making the most delicious smoked spuds takes a bit of time, but it’s so well worth it! Let’s break it down. None of it is difficult if you take it step by step.

Start by add the baking potatoes to a large mixing bowl and drizzle them generously with olive oil. Then rub the oil into each potato and salt the skins.

After you’ve got your potatoes oiled and salted, you can set up your smoker. To get your smoker going, add some wood chips to the smoker and fill the water pan halfway full.

Now you can put the oiled, salted potatoes directly on the grates of the smoker. You will need to add more chips to the smoker occasionally as the potatoes cook.

Smoke them at 250 for 3 hours. The potatoes should be fork tender. Once they are you can carefully remove the potatoes from the smoker and place them on a plate.

Let them rest until they are cool enough to handle. 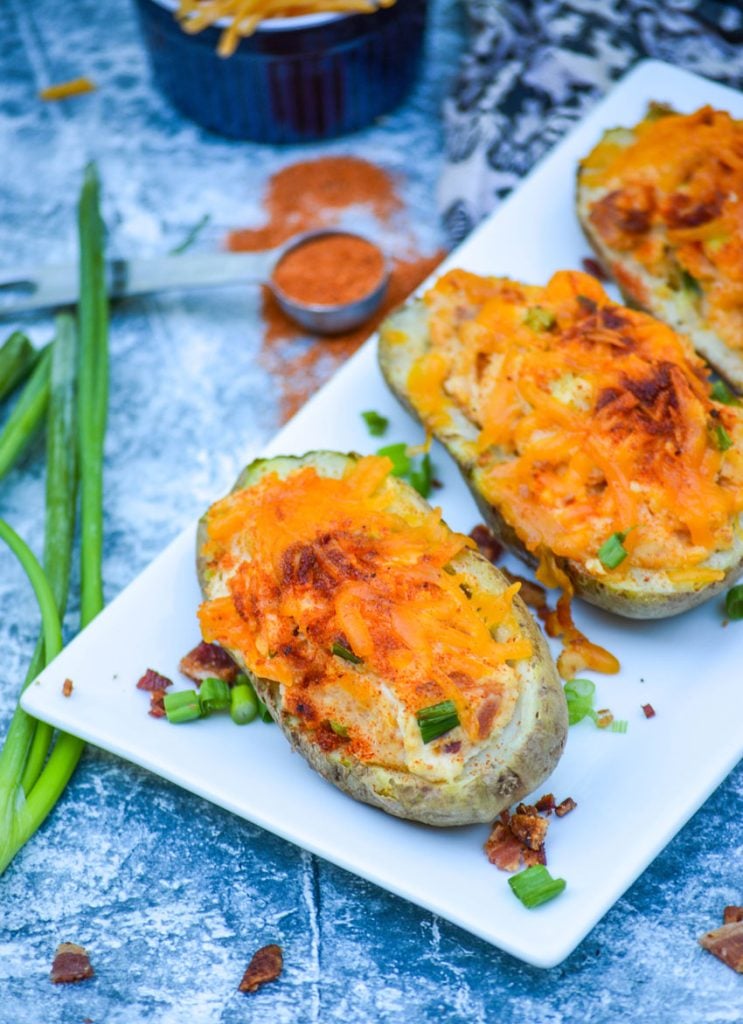 Once the potatoes are cool enough to handle, you can slice them evenly in half. Then use a spoon and scoop the centers of the potatoes out into a bowl.

Make sure you leave enough potato in each skin so they skins are sturdy and won’t break.

Once you have all the potatoes scooped out, mash the potatoes with a potato masher and cream cheese, green onions, your barbecue seasonings, butter, bacon, cream, and 1 cup of shredded cheese to the potatoes.

Stir everything together until it is evenly incorporated.

Now that you’ve made your filling, you can spoon the filling into the waiting potato skins. Put the stuffed potatoes into a smoker safe baking dish.

Top each potato with a sprinkle of paprika and extra cheese. Return them back to the smoker and let them smoke for another 30 minutes or until the cheese is melted.

Serve hot and enjoy the cheesy goodness. Just look at that drool-worthy cheese-pull! 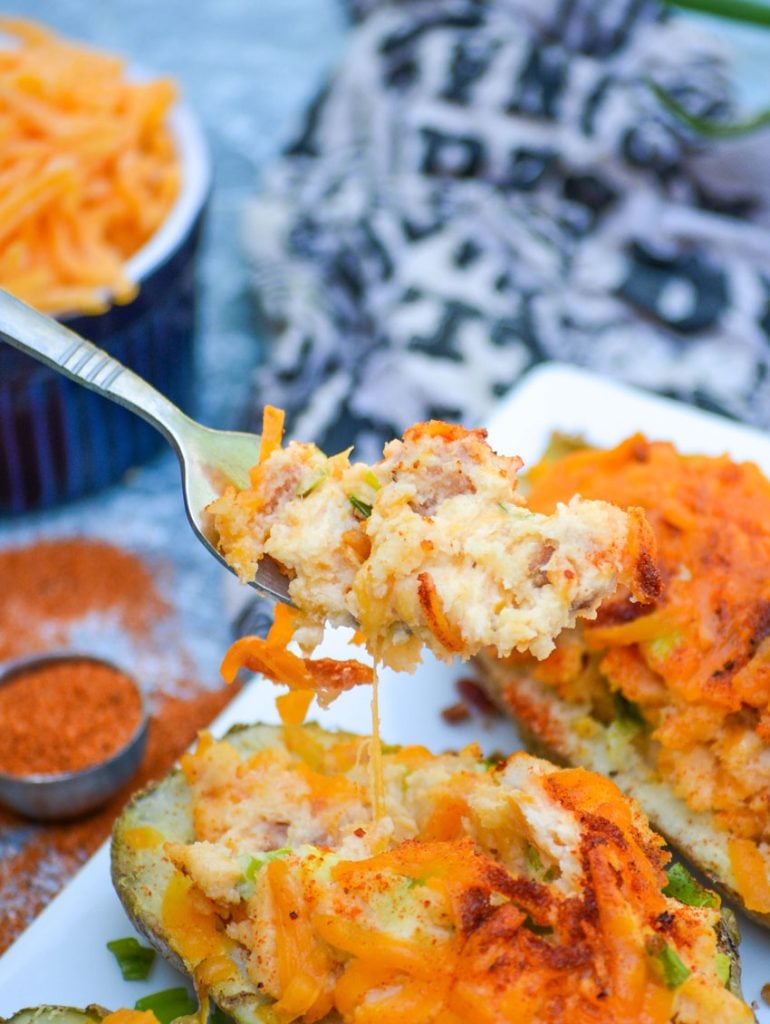 What to Serve with Smoked Loaded Twice Baked Potatoes:

These smoked loaded twice baked potatoes would be a unique twist on traditional Thanksgiving mashed potatoes, particularly if you plan to grill your turkey.

You can check this guide on how to grill your turkey out if you’re interested in trying that this year.

Outside of Thanksgiving, these smoked loaded twice baked potatoes would pair well with picnic and barbecue food. I love them with:

That’s another reason I love smoking things, when we pull it out- we load it up. We’ll have our main course meat going, and a couple sides. When the timer’s done, so’s our whole meal. One stop, dinner’s done, and everything is equally amazing. 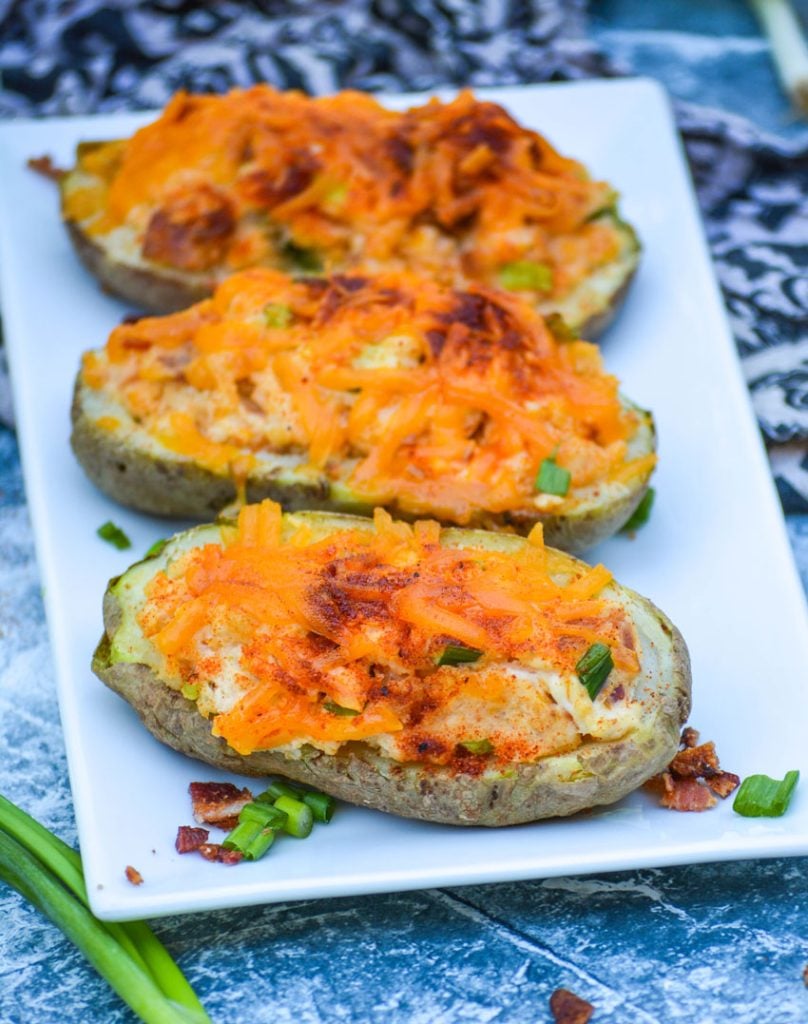 Are you looking for other twice baked potato recipes? Try these:

If you’ve tried this SMOKED LOADED TWICE BAKED POTATOES, or any other recipe on my site, let me know in the comment section how it turned out, we love hearing from our readers! You can also follow along with me on PINTEREST, FACEBOOK, and INSTAGRAM to see more amazing recipes and whatever else we’ve got going on! 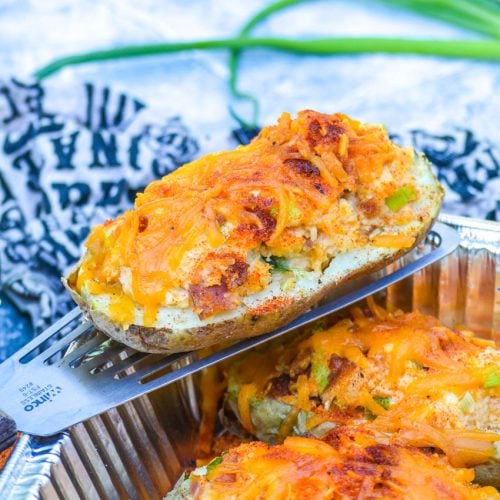 Take loaded baked potatoes to the next level by slow smoking them in your smoker. It infuses every cheese bite with real wood-smoked flavor making these the ultimate side dish for all your grilled meats, and so many other meals too.
No ratings yet
Print Pin Rate
Course: Side Dish
Cuisine: American
Prep Time: 30 minutes
Cook Time: 3 hours 30 minutes
Total Time: 4 hours
Servings: 6
Calories: 615kcal
Author: Meaghan @ 4 Sons R Us