Apple pie cupcakes are beautiful spin on an old classic dessert. Box mix gets infused with cinnamon and stuffed with filling for a treat you’ll love! 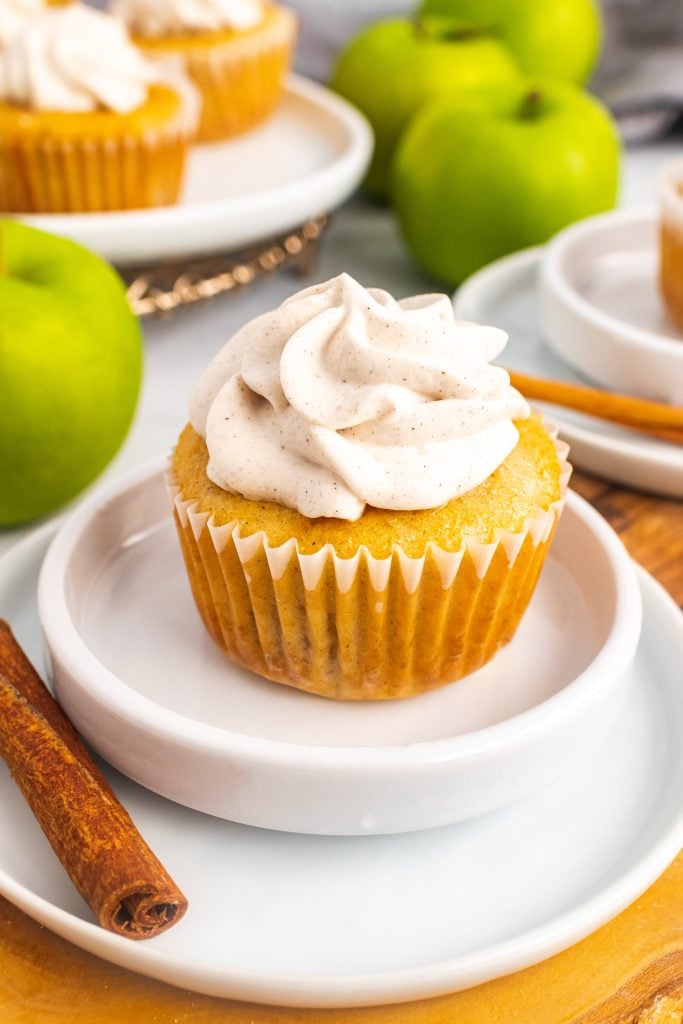 Apple pie is the sweetheart of American desserts.

While it’s tried and true and a classic hit on dessert tables everywhere, it’s not all that easy to make and can be kind of time consuming.

But then it occurred to me that cupcakes, especially ones that come from a box like the one sitting in my pantry, are hardly any work at all .

AND they taste great. 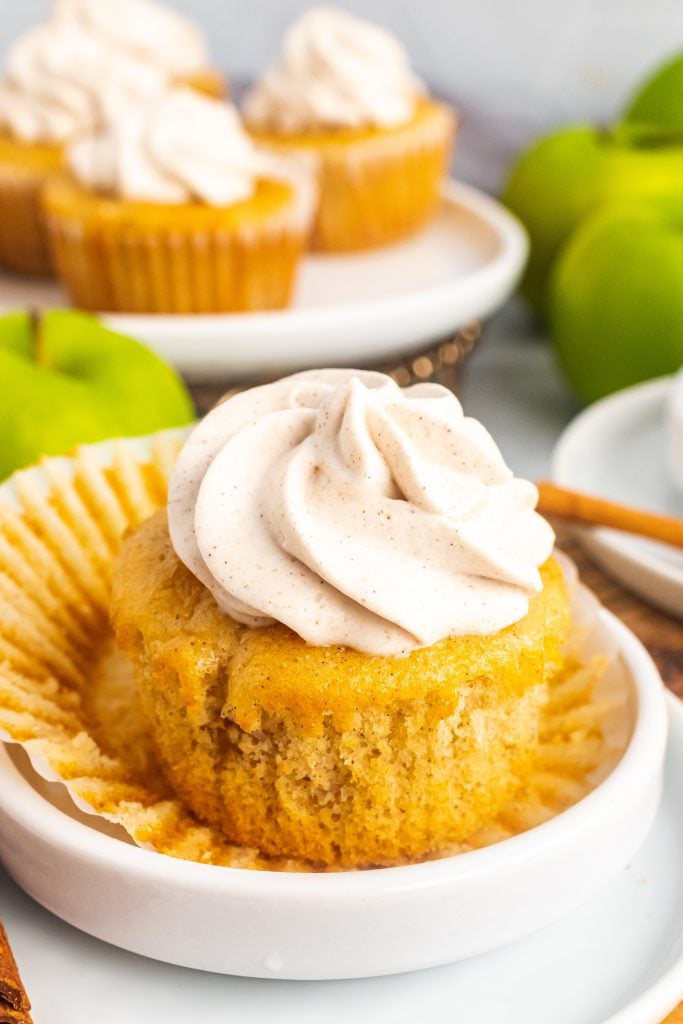 From the outside you’d never guess these were anything other than an average cupcake, but one bite reveals it’s moist, cinnamon infused cake and surprise apple pie filling in the center.

All the same flavors, in a snap, with a lot less fuss and a lot less mess. 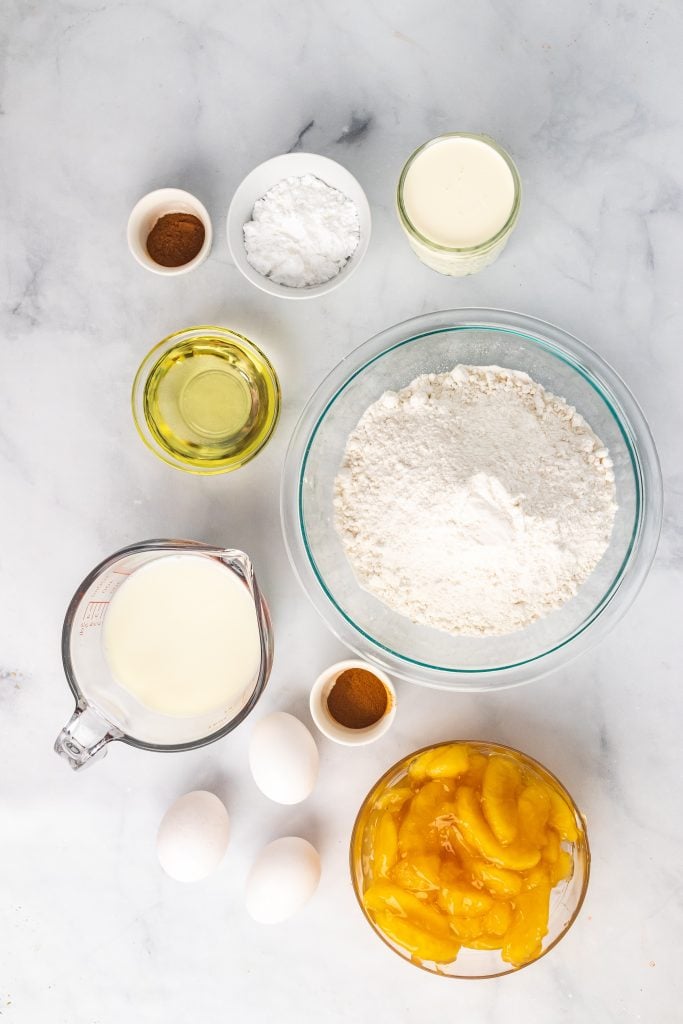 To make this you’ll need: 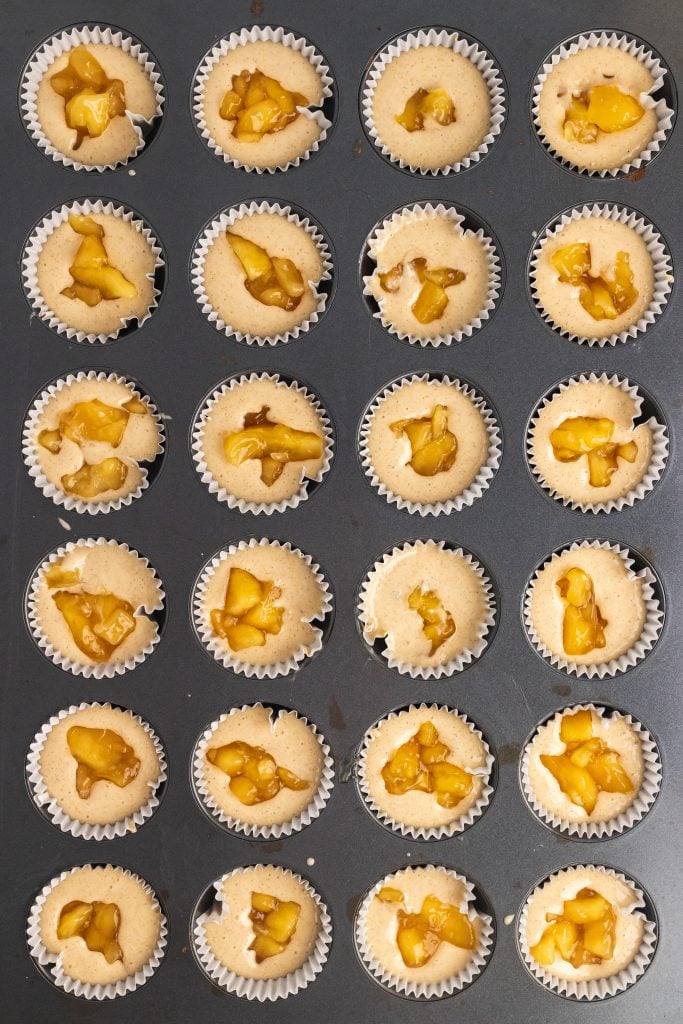 Making these apple pie cupcakes is a snap!

To do it, start by preheating the oven to 350 degrees.

While the oven is warming, line a cupcake pan with cupcake liners.

Make cupcake batter according to the package directions.

Mix the cinnamon into the batter. 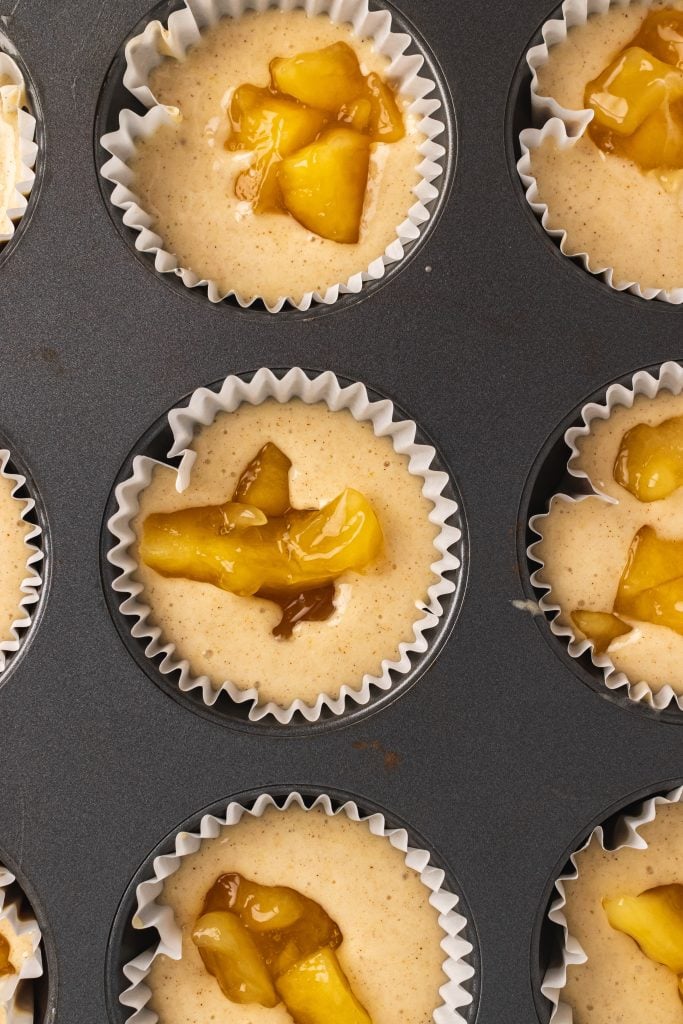 Then, chop the apple pie filling into bite sized pieces.

Use a cupcake scoop to add cake batter to each cupcake liner and place one heaping tablespoon of pie filling on top of the batter in each. 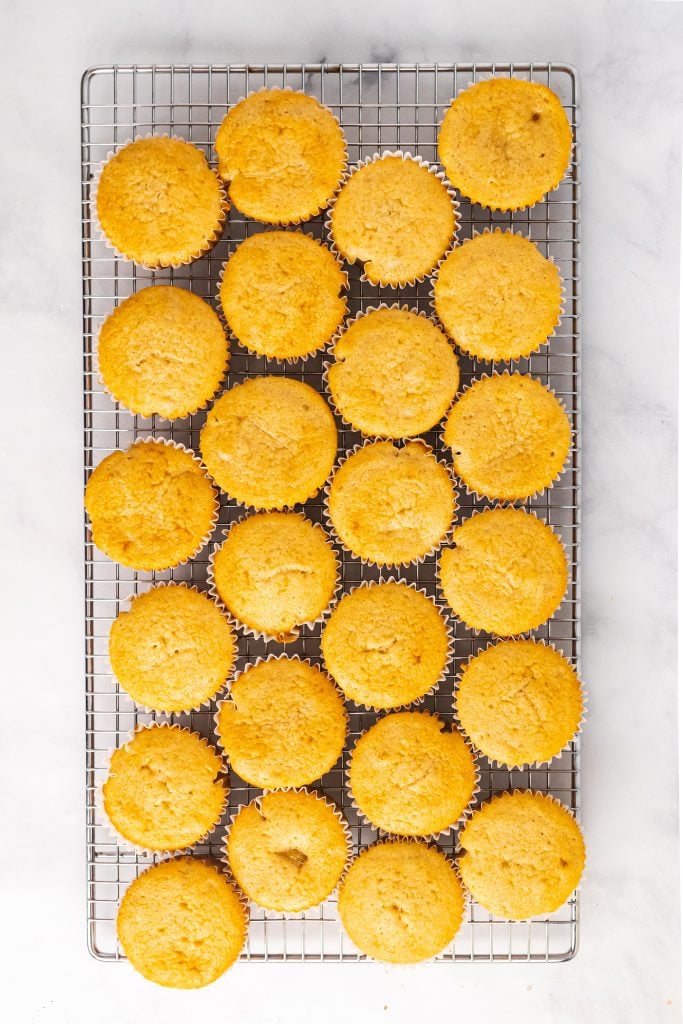 You don’t have to add this garnish to your cupcakes, and I promise they’ll still be utterly delicious. However, when I have the time I like to add simple swirls of cinnamon whipped cream to the tops of the cupcakes as a simple, but stunning finishing touch.

And while it may look gourmet, it’s only takes three simple ingredients and a matter of minutes to whip up. 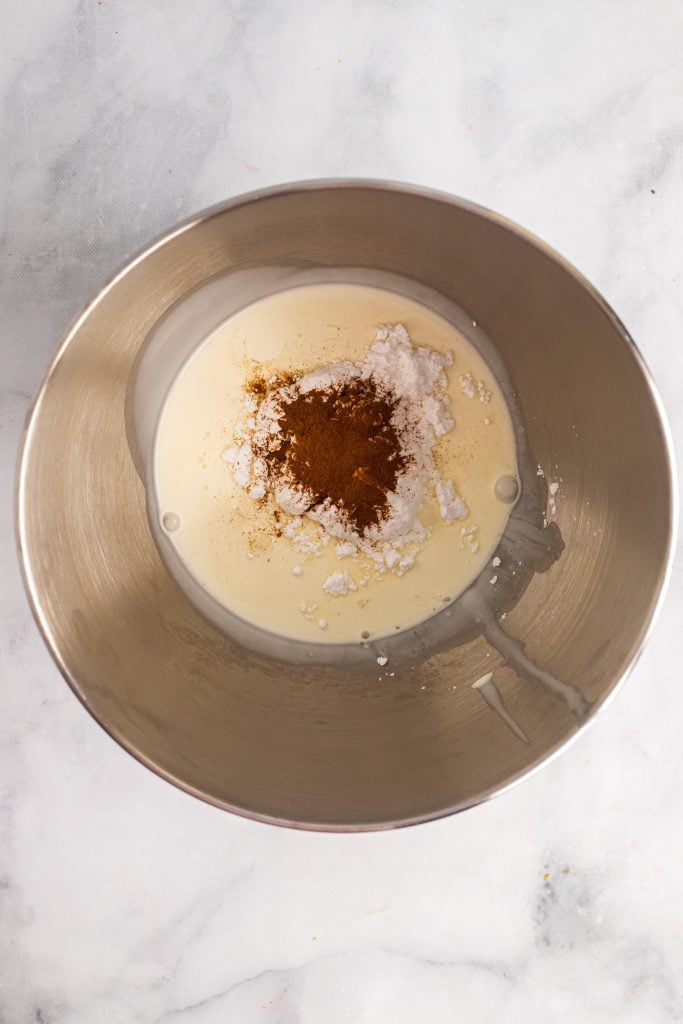 Fit your mixer with the whisk attachment and mix on high speed until evenly combined and stiff peaks form.

Using a spatula transfer the mixture to a piping bag fitted with a swirl attachment. Pipe on in the desired size, one nice swirl to the center of each cupcake. 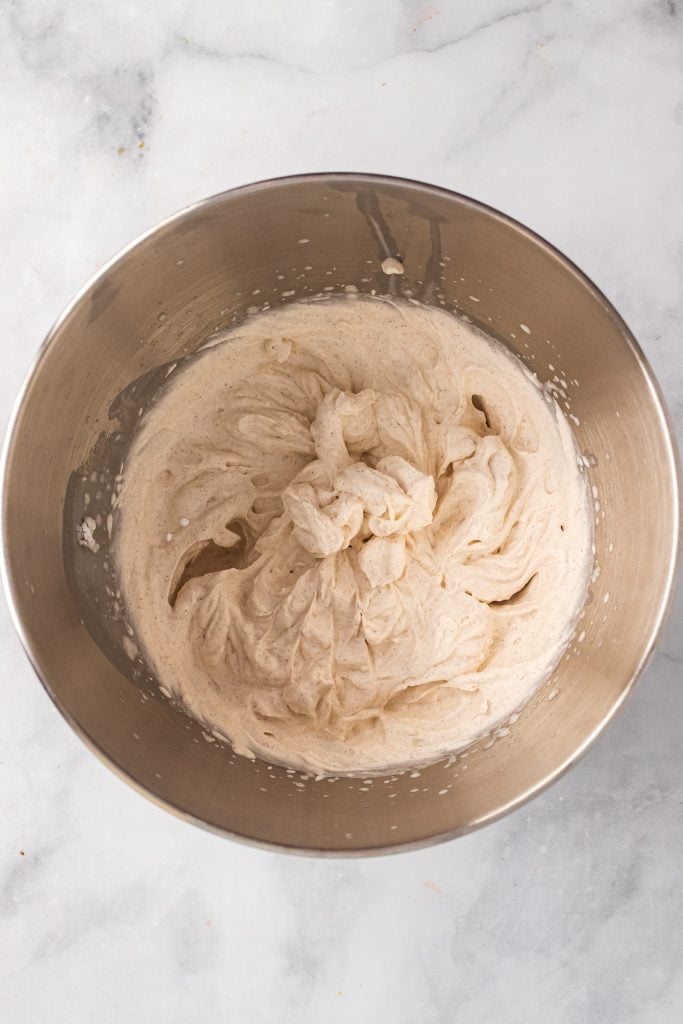 Store the baked cupcakes without topping with whipped cream or ice cream in an airtight container on the counter for 4-5 days.

Top with whipped cream or ice cream prior to serving. 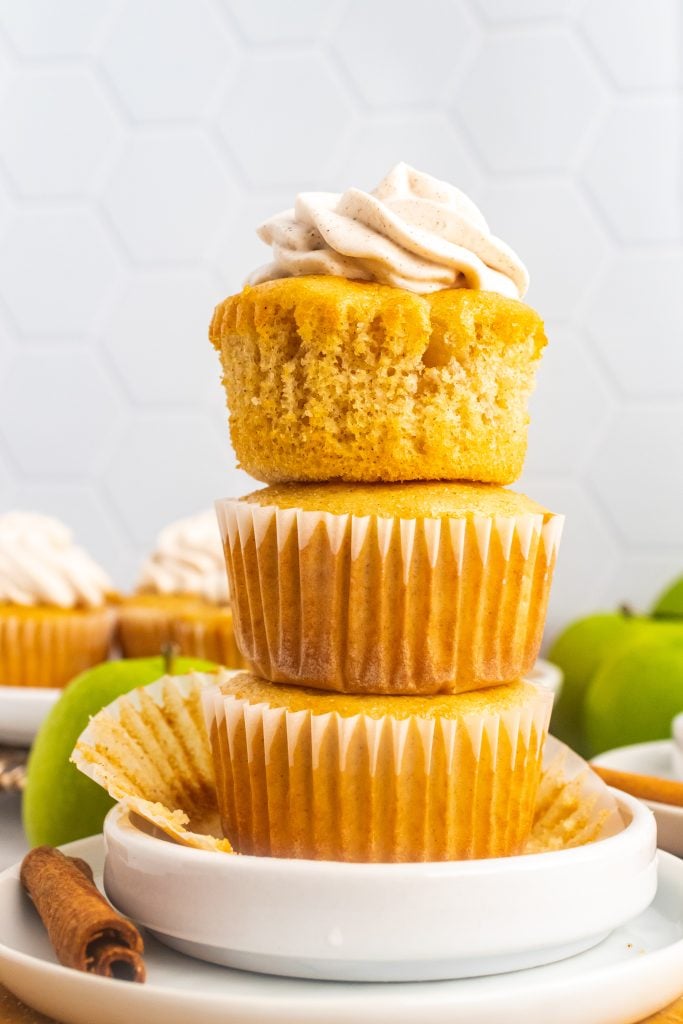 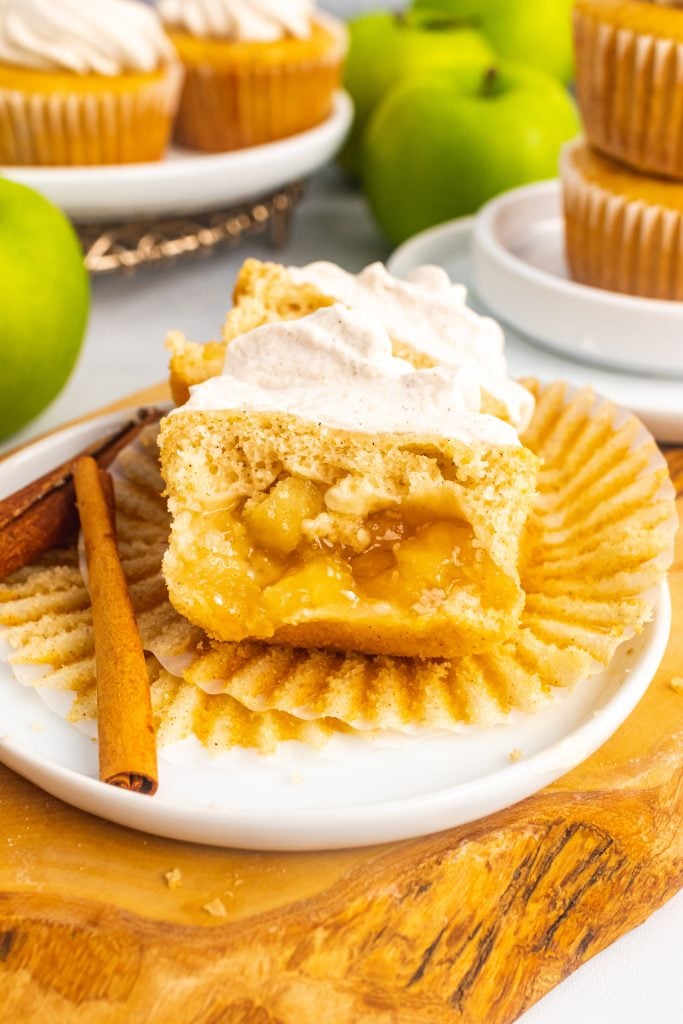 Apple pie cupcakes are some of my family’s favorite fall treats. Bake them up and enjoy a new twist on the classic.

Looking for other cupcake recipes? Try these:

If you’ve tried these APPLE PIE CUPCAKES, or any other recipe on my site, let me know in the comment section how it turned out, we love hearing from our readers! You can also follow along with me on PINTEREST, FACEBOOK, and INSTAGRAM to see more amazing recipes and whatever else we’ve got going on! 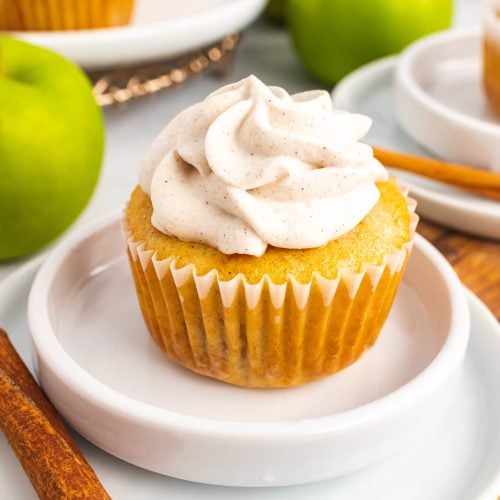 One thought on “Apple Pie Cupcakes”