Pecan pie cupcakes combine all of your favorite fall desserts into one yummy, Fall filled cupcake. These over the top pecan pie cupcakes are the perfect holiday party dessert. Make a batch of these delicious fall cupcakes for Thanksgiving or any holiday gathering and get ready for the rave reviews! 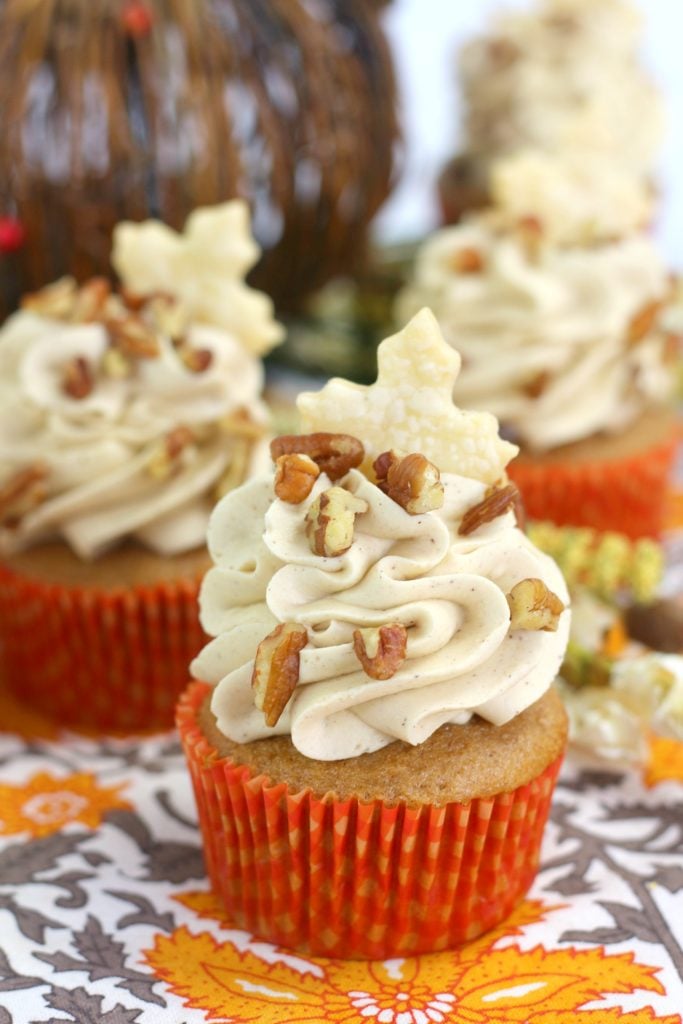 Are you a cake person or a pie person? I can’t choose! If I could have cake and pie with every meal I totally would!

Why pick one or the other? With these pecan pie cupcakes you don’t have to choose! They combine all the fluffy goodness of cake and icing with the yummiest pecans that taste just like pecan pie.

It’s the perfect way to satisfy your cravings for cake or pie and please a crowd of people without having to make multiple desserts.

And since this recipe makes 22 cupcakes, SO you’ll have enough for everyone to have one.

How to Make Pecan Pie Cupcakes

To make pecan pie let’s break it down into parts. There are a few pieces to this recipe:

While it seems like a lot of parts for one dessert, none of the parts themselves are difficult to make. So let’s go step by step through each part so you can see how easy making and nailing this over the top dessert is.

I am doctoring the box mix with butter, milk and extra eggs for maximum moisture and richness. With this trick you’ll never know you’re eating a boxed cupcake!

To make the cupcakes, in the bowl of a stand mixer, combine the spice cake mix, milk, butter, and eggs.

Beat the mixture until it is combined with no dry spots. Scrape down the sides as needed.

Once you’ve made the batter, pour it into cupcake pans lined with liners. Fill each liner up about 3/4 of the way full.

Then bake in a 350 degree oven until the cupcakes are done, about 21 minutes. 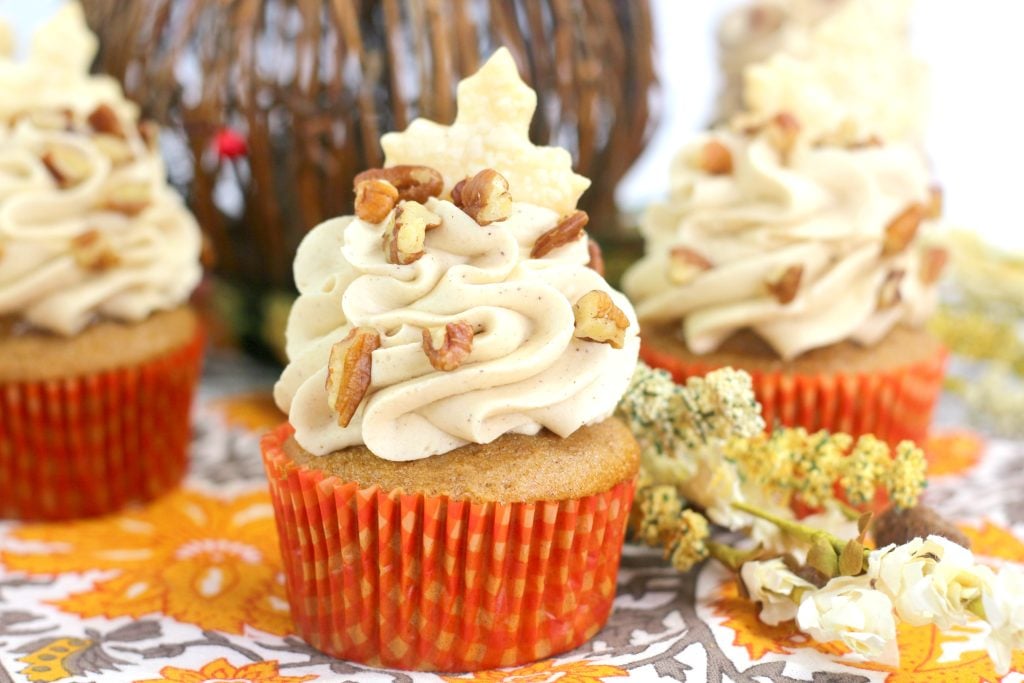 While the cupcakes are in the oven, you can get your pecan pie topping together.

To do this, you’re going to add all the ingredients you need for the pecan pie topping except the pecans and the vanilla to a medium saucepan.

Then you are going to bring the mixture to a boil, stirring often. When the mixture comes to a boil, remove it from the heat and stir in the pecans and the vanilla.

Now let it sit on your counter for 10 minutes and then refrigerate for 1 hour while the cupcakes themselves are cooling.

Each cupcake gets topped with a generous swirl of cinnamon buttercream.

To make the buttercream, use a stand mixer to beat together room temperature unsalted butter, vanilla, cinnamon, and whipping cream until the buttercream is light and fluffy.

I like to add my whipping cream 1 tablespoon at a time so I can fully control the texture of my buttercream.

Adding a bit more whipping cream will thin the frosting out a bit, making it easier to pipe on smoothly. Too much though, and it can quickly turn soupy which will be a mess- which is why I advocate for the tablespoon at a time method.

Once you’ve made the frosting, put it into a piping bag with a star tip attached.

The finishing touch for these scrumptious pecan pie cupcakes are these adorable cinnamon sugar pie crust cookies, which are essentially cookies made from pie crust.

If you choose to use homemade crust, feel free to use your favorite pie crust recipe. Don’t have a favorite recipe yet? I like this classic pie crust from Sally’s Baking Addiction.

To make these cinnamon sugar pie crust cookies, unroll your pie crust on a lightly floured flat surface- like a clean kitchen counter top or cutting board- and brush on melted butter.

Then dredge it in cinnamon sugar. You want to make sure you thoroughly coat each side the way you do when you’re dunking my churro pancakes into the cinnamon sugar mix.

Once you have coated the pie crust in cinnamon sugar, cut the pie crust into festive fall shapes with a mini cookie cutter. I like these adorable maple leaves but use whatever you like.

Then spread the shapes out onto a cookie tray lined with parchment paper and bake in a 350 degree oven until they are golden brown. Take them out of the oven and let them cool while you start assembling your cupcakes.

Now that you’ve made all the pieces of these cupcakes let put them together. After your cupcakes have cooled, scoop about a tablespoon of the center of the cupcake away. If you feel bad about wasting the extra cake, save it in a bowl and make some fall cake pops or truffles with it.

Once you’ve removed the center of each cupcake, fill each cupcake with the pecan pie filling.

You don’t need to worry about doing it neatly. Because after you’ve stuffed each cupcake, you’re going to pipe on a dollop of the cinnamon buttercream frosting.

This will cover up any messiness from the filling. After you’ve frosted the cupcakes, garnish each one with a pie crust cookie and some extra chopped pecans.

The result? A stunning fall cupcake that is the perfect end to any holiday meal or party. 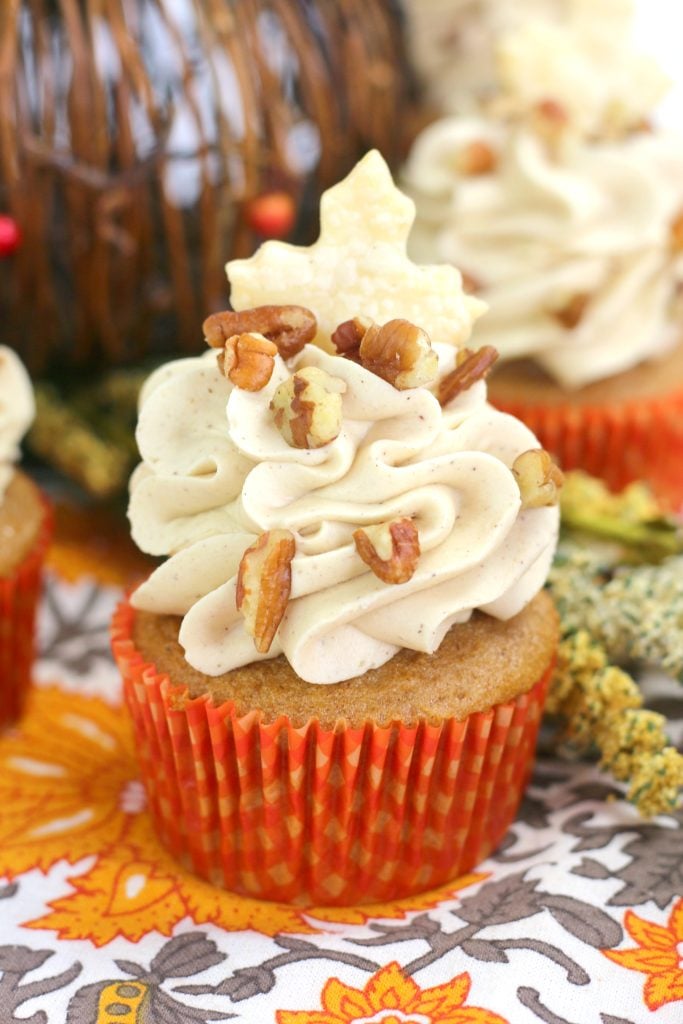 Looking for other over the top fall cupcakes for your Thanksgiving festivities? These are some other recipes I love:

If you’ve tried this PECAN PIE CUPCAKES, or any other recipe on my site, let me know in the comment section how it turned out, we love hearing from our readers! You can also follow along with me on PINTEREST, FACEBOOK, and INSTAGRAM to see more amazing recipes and whatever else we’ve got going on! 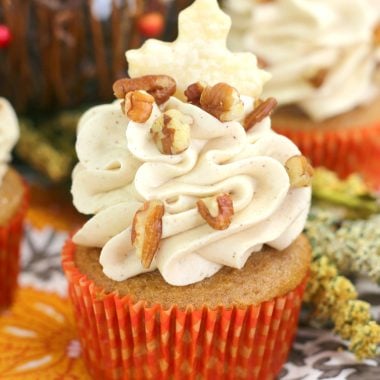 For The Pecan Pie Topping:

For The Cinnamon Frosting:

To Make The Cupcakes:

To Make The Cinnamon Frosting: