Potatoes are a pretty common occurrence on our dinner table, but certain recipes take them above and beyond. These boiled Syracuse style salt potatoes are a regional specialty that everyone should know & love. Potatoes cooked in a heavily brined water result in the creamiest potatoes we’ve ever experienced, with less starch. This is the potato recipe bandwagon you want to jump on. 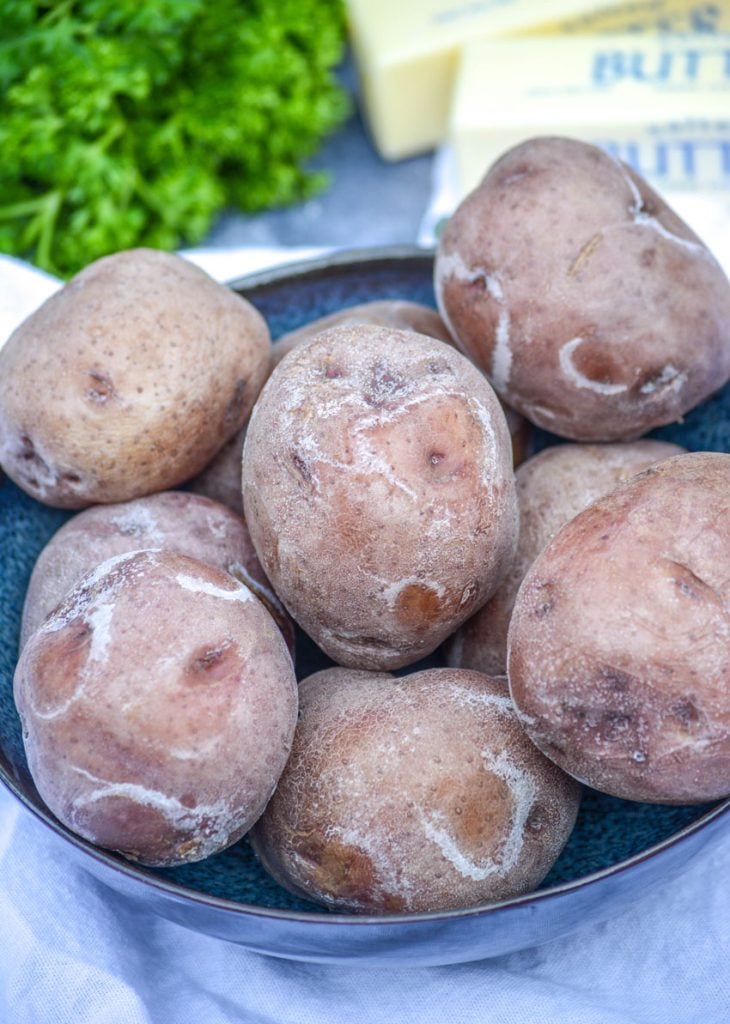 It wasn’t until a decade ago when my culinary world started expanding. It was when I met my husband, and he started taking me up North to visit his family.

Since then I’ve learned many things, and have discovered and shared many family recipes. 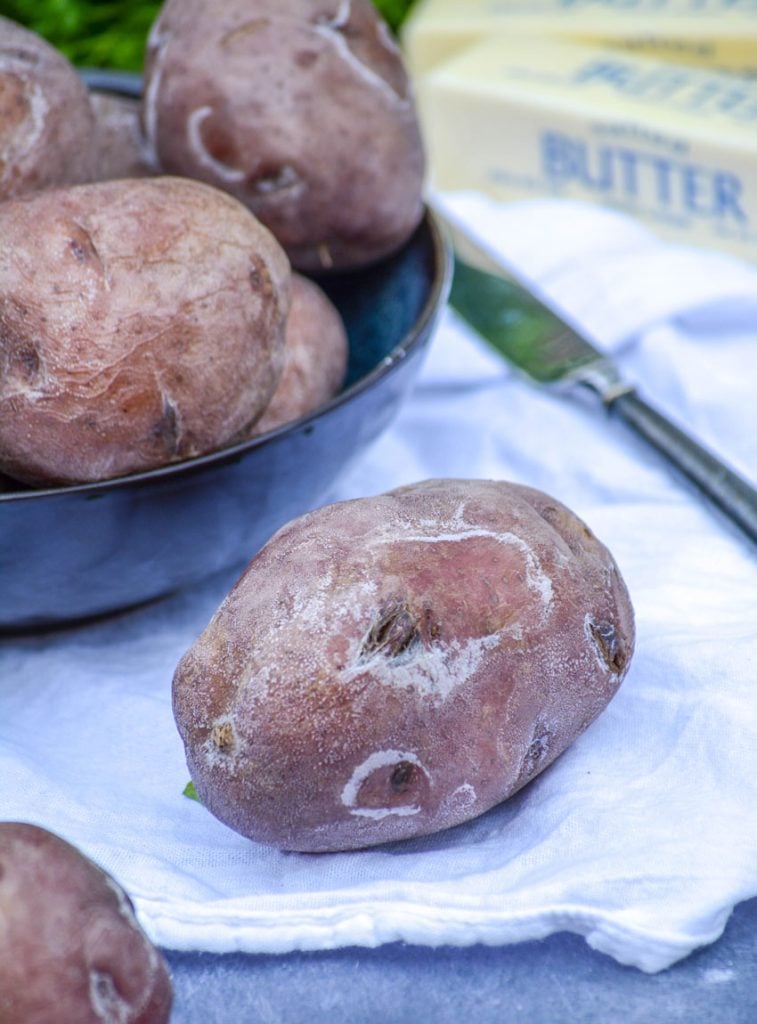 While salt potatoes aren’t a family specialty, I did first learn of them on a family trip.

They’re a special delicacy everyone should enjoy, and they hail from the Syracuse region of New York.

They’ve actually got a really interesting origin story too. 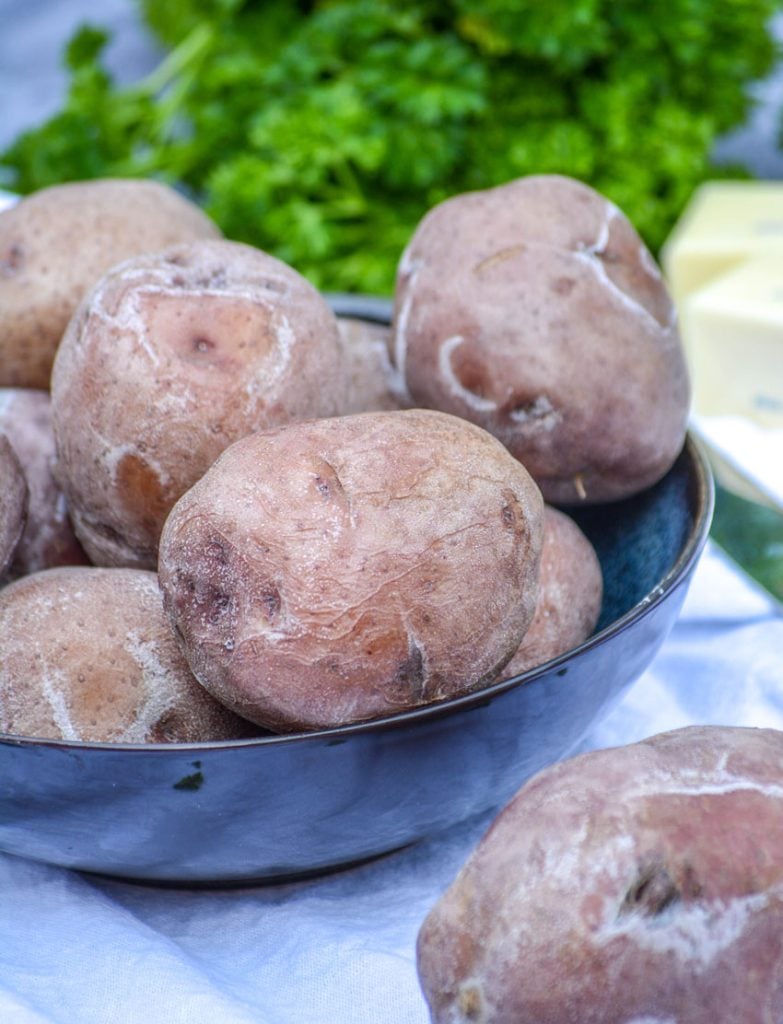 They originally sprouted from the Syracuse region of New York. Salt mines & salt springs abound in the area. It’s no big deal.

Around there, salt is really life. Gives the beach-y ‘salt life’ a whole new meaning.

Time may have marched on for a lot of us, but that’s no the case with salt potatoes.

These creamy, boiled potatoes first came on the scene in the 1800’s. They originated from smart, industrious workers in the local salt mines. 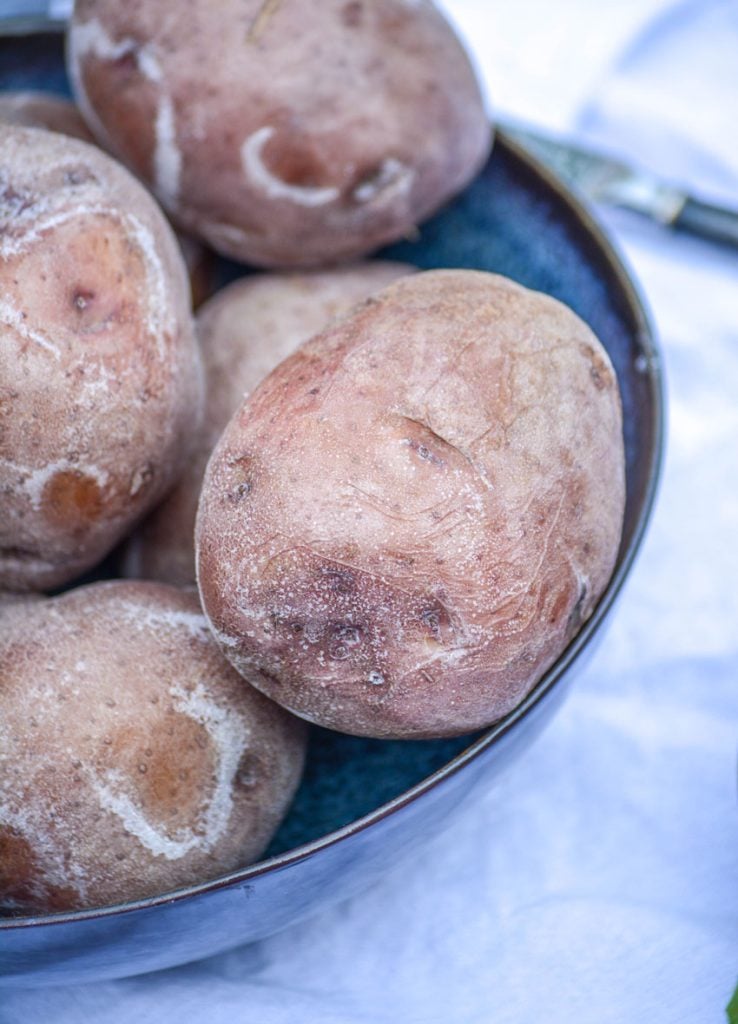 Salt potatoes, as they’re called are really a specialty of a specific region in New York- the Syracuse region. It’s also been given the name ‘ salt city’.

Not sure how exactly it began, but the basic version is that Irish immigrant workers (very proficient with potatoes), found a new way to cook their spuds for lunch.

Potatoes were cheap, and what they had. Obviously they’d take them for lunch. They boiled them in the brine from the mines.

Salt potatoes are, as the name implies, salty. On the outside. The saltiness was never the real goal though.

When cooked in a salty brine, the potatoes became extremely tender & creamy on the inside. This was what made them so popular.

It also made for an easy, cheap lunch earlier laborers couldn’t ignore. 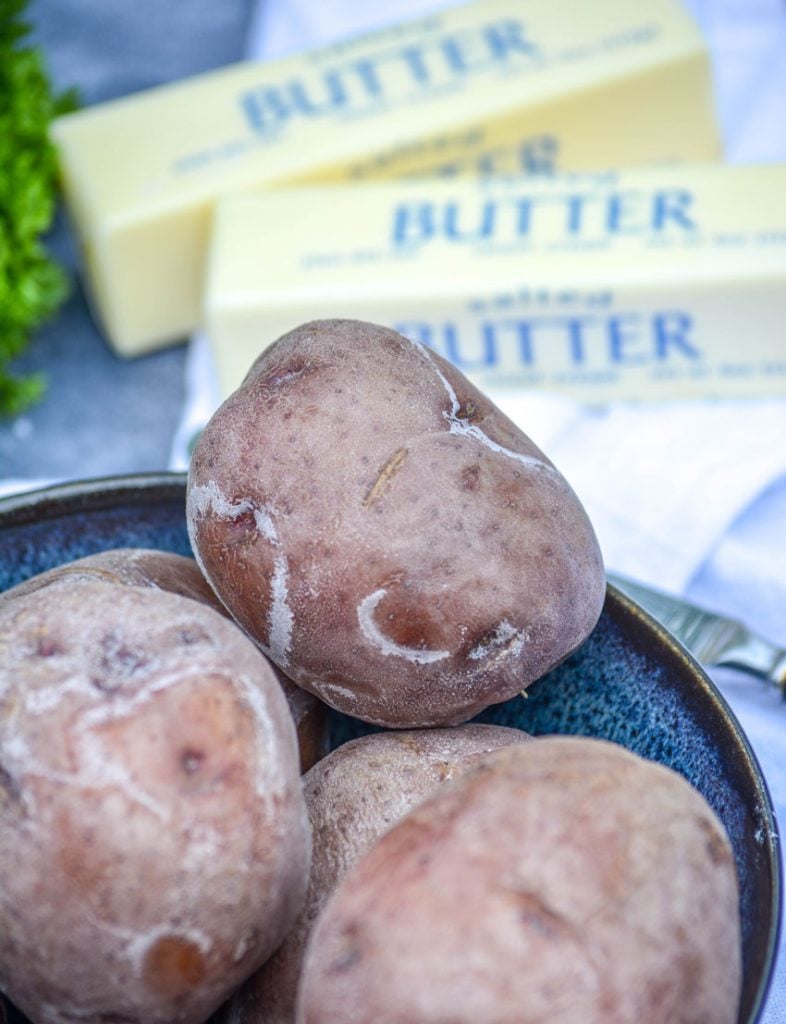 Again, let me say that salt wasn’t the actual purpose- it just had a role to play.

Remember the creaminess I mentioned earlier? That was the delicious result of an unknown miner’s ingenuity.

I’m no stranger to the amazing way salt enhances my favorite potato based sides. In this recipe though, the salt is an incidental flavor enhancer.

It’s real purpose is to drastically lower the boiling point of the water in the main pot. That makes the flesh of the potato super creamy, and it also reduces the starchiness. Win, win!

If the salitness is a concern, the biggest thing is to make sure you’re using enough water in your pot.

While the amount of water in this recipe isn’t measured to an exact amount, I’d estimate that I used roughly three quarts for this recipe. 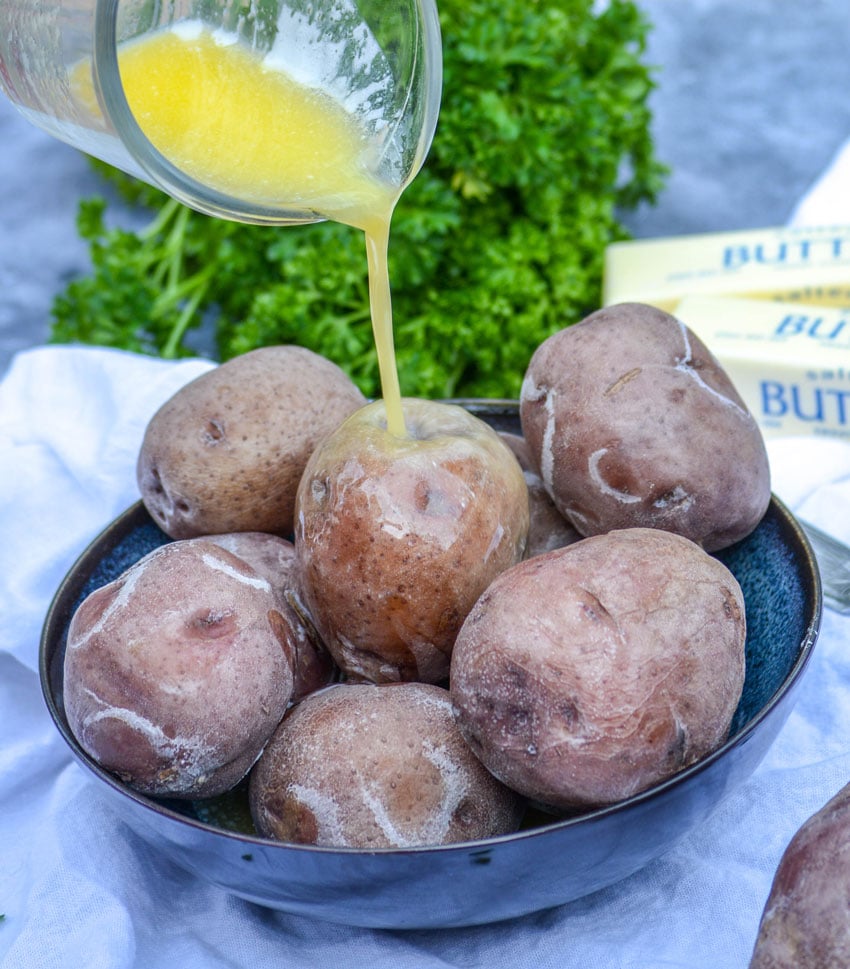 The ratio ends up being roughly one cup of salt (kosher/sea salt is best) to six cups of water. Make sure to stir, stir, stir.

Stir that water, and keep on stirring, until the salt’s finally dissolved into it & no longer settling at the bottom of the pot.

Syracuse Style Salt Potatoes are also a Spring & Summertime staple in their native region, making them a perfect recipe to share with you all now.

Cook the potatoes according to the recipe instructions, but a pro tip- let them sit in the strainer when done. Not indefinitely though.

Cover the strainer with a bit of tin foil to keep in some of the heat. We want them to stay hot, but this will allow all of the excess water to completely drain away- causing the skins to crisp up & the salt to re-solidify.

Resist the temptation to rinse the salt potatoes after they’ve done cooking. Either serve them along with melted butter for dipping, or do what we do and just pour the melted butter right on top.

Just don’t use salted butter. Obviously, there’s enough salt on the potatoes for everyone! 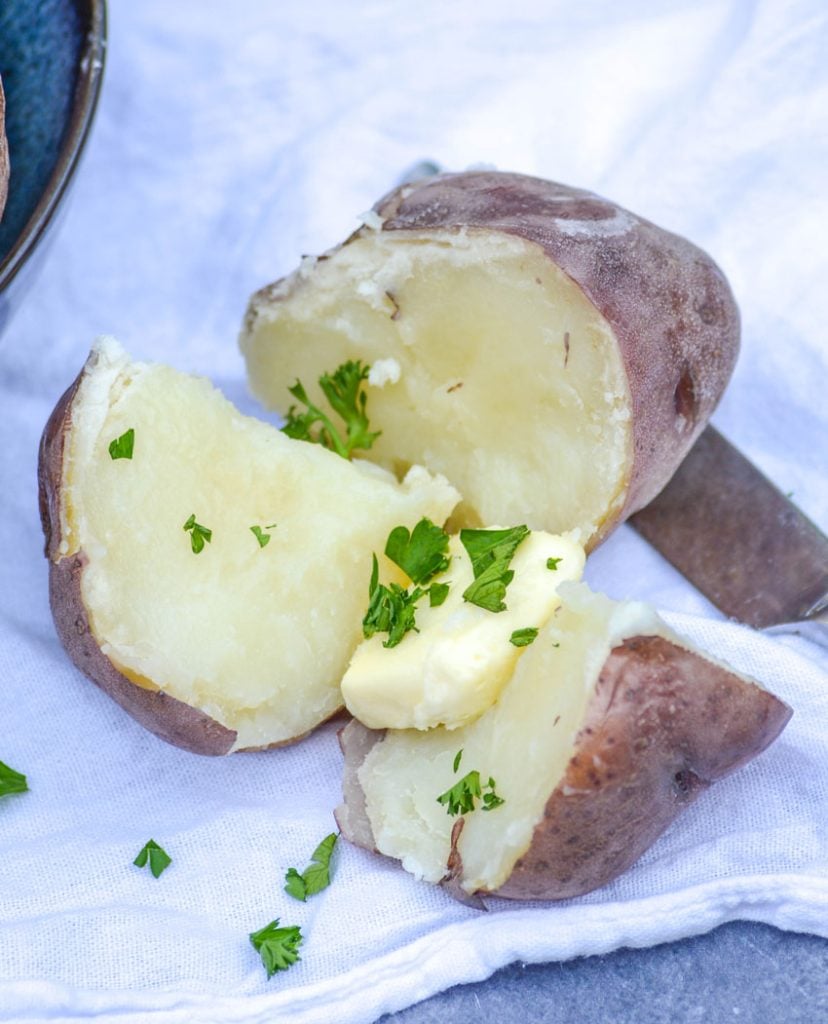 If you want to experience the creamiest dinner potatoes ever, then fill a pot of water add copious amounts of salt & boil your red potatoes.

These Syracuse style salt potatoes are about to be your new go to method for enjoying the starchy veggie. And they’re guaranteed not to disappoint, whatever your level of cooking experience.

Other Tasty Ways To Use Up Potatoes:

If you’ve tried these SYRACUSE STYLE SALT POTATOES, or any other recipe on the site, let me know in the comment section how it turned out, we love hearing from our readers! You can also follow along with me on PINTEREST, FACEBOOK, and INSTAGRAM to see more amazing recipes and whatever else we’ve got going on! 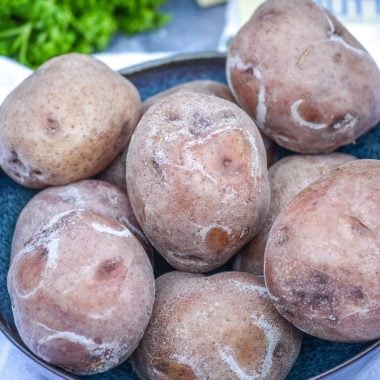 You can use other potatoes, and they'll still be good- but red potatoes really do yield the best results. For the most authentic version, use baby red potatoes. Also, while I recommend sea salt- regular table salt will also work just as well.