It doesn’t get much better at any meal than when fresh baked bread is served. Get a batch of fluffy oatmeal pull apart rolls on the table, with ease following this simple recipe. It’s perfect for any level of baker, and will pair well with just about any meaty entree you decide to serve it with. 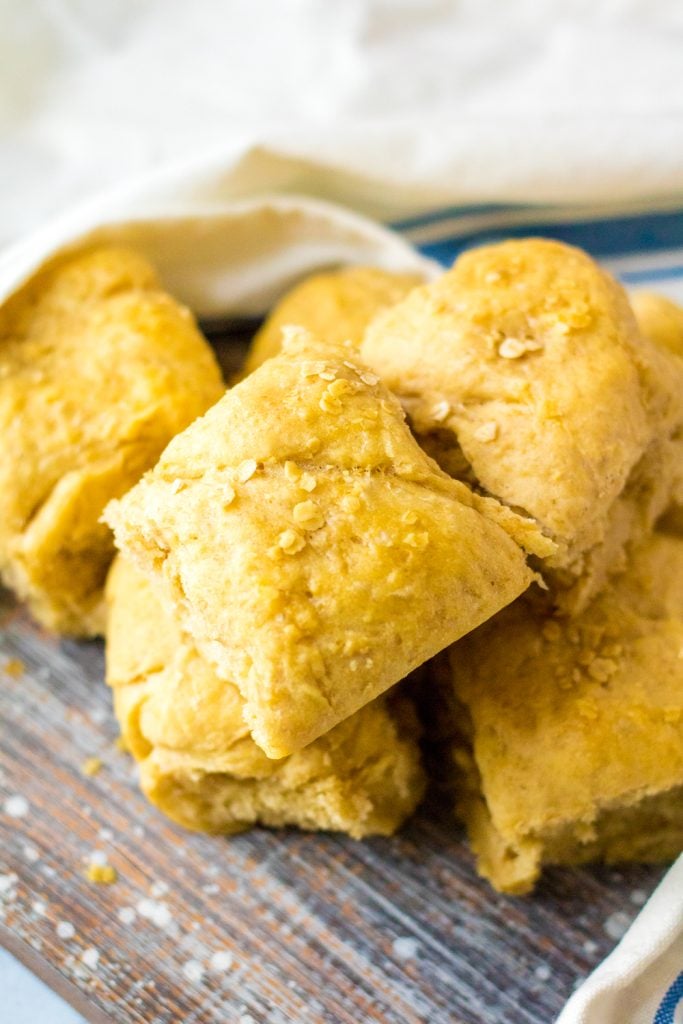 My husband grew up in a home where bread was a staple of every meal.

Don’t get me wrong, I like bread, but I can’t do it with every meal.

However, we try to compromise and I try to make sure there’s some sort of loaf or rolls, at least for him, as part of his dinner.

When Money Saving Mom originally posted this recipe, I tried it that very night and it’s been a regular part of the cast of characters for dinner ever since.

I love these because they’re very little work, especially while I’m preparing the rest of the meal, yet they’re incredibly moist and fluffy.

The oatmeal also adds an extra boost of nutrients to fortify my guys.

Besides, nothing beats rolls fresh from your own oven.

That I can get behind at any meal! 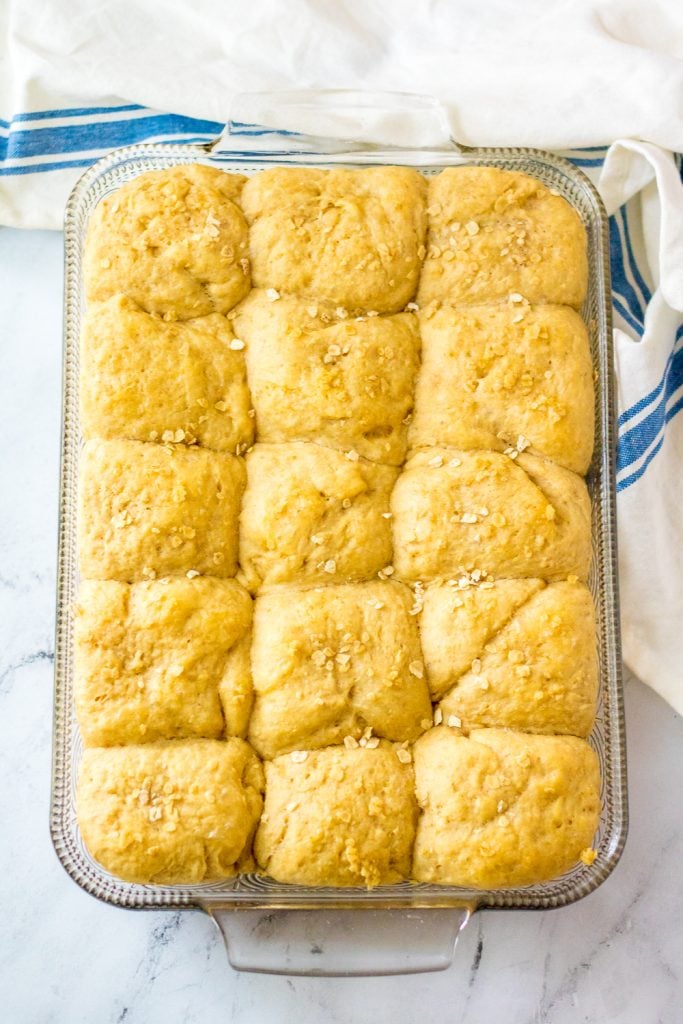 Benefits Of Including Oats In Your Diet

Oats are highly nutritious. Which is probably why doctors and diets always include them in the breakfast round up.

While it may seem like oats are over-promoted- there is sound reason behind it.

The biggest reason oats are toasted as healthy choices being that they’re high in fiber.

However they’re also high in things like magnesium, iron, zinc, and vitamin B.

It’s always a good thing when you can incorporate a simple food source full of rich nutrients into your every day meals.

Bonus points if your kids don’t know you’re doing it! Mine would never suspect it in bread, let alone pillow soft rolls. 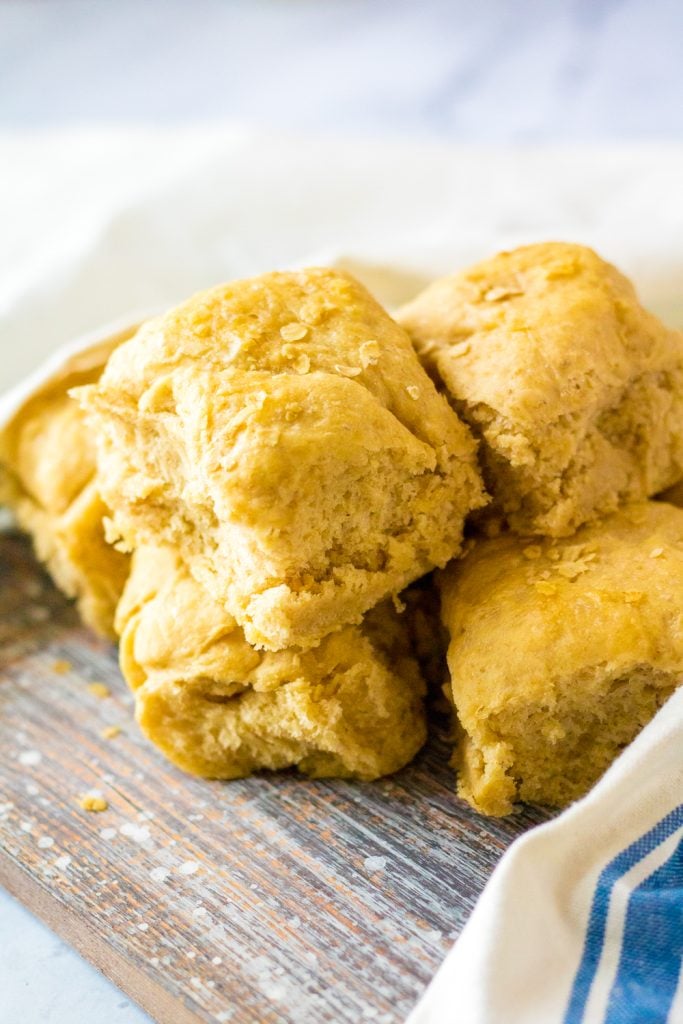 Why Should You Use Oats In Dinner Rolls?

If you want an easy bread recipe to serve with dinner, then these oatmeal pull apart rolls fit the bill perfectly!

The oats alone do not really cook the bread, or cause it to cook the way that it does.

Instead- they’re just a delicious and nutritious addition you can feel good about.

However, they do contribute to the texture. They give it a denser feel.

This is absolutely something I love in a stand-alone dinner roll recipe. 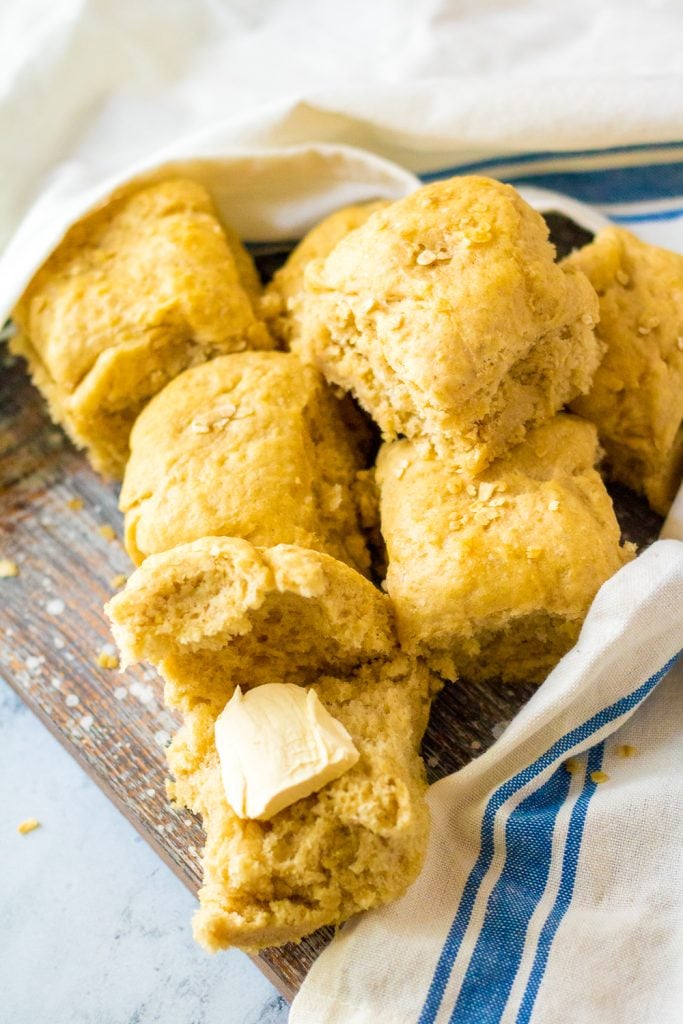 How To Make Quick Oats

I know this recipe calls for quick oats.

And you can absolutely find those and buy them, but why?

We all don’t necessarily keep those in our pantry.

I keep the old fashioned rolled kind in mine though.

If you’ve got those steel cut kind on hand, then you can easily whip up a batch of quick oats in no time.

Simply add the desired amount of oats to the bowl of a food processor, with the cutting blade attachment in place.

Pulse them once, twice. That’s it.

You want to chop them up, but DO NOT pulverize them.

You will need to re-measure them before adding them to the recipe, since once they’ve been chopped it can be a bigger yield than your originally measured.

In short quick cooking oats are really just regular ‘big’ oats, chopped up at bit so they in fact cook quicker.

The original is often cheaper in price too, so you can save money by buying the original and cutting it down to size, as needed. 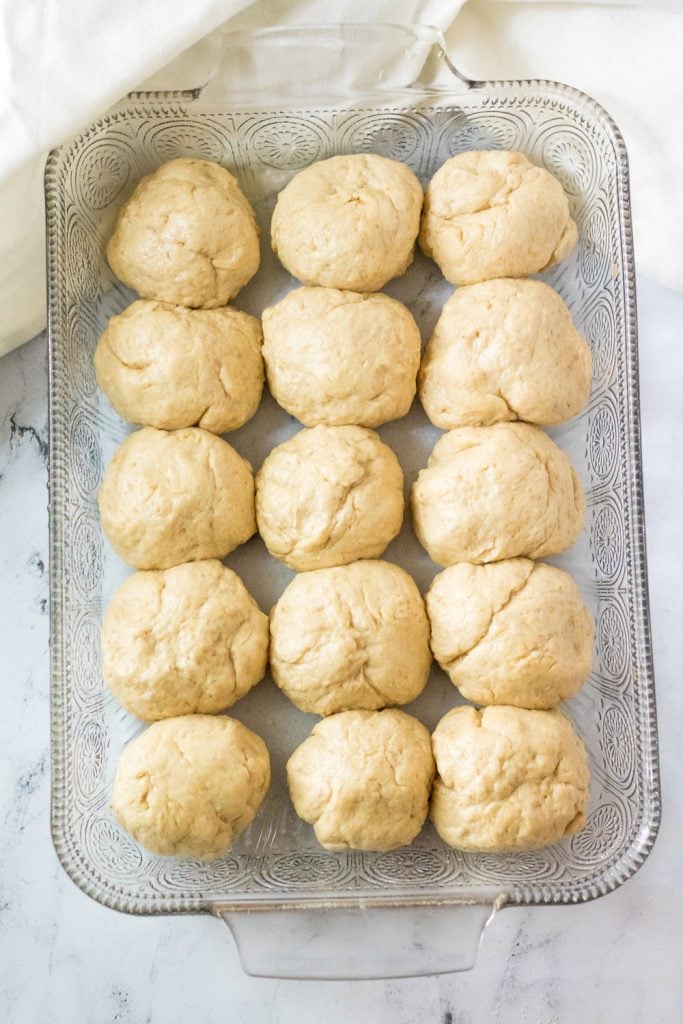 How To Make The Rolls

To the bowl of a stand mixer, add the yeast, oats, wheat flour, and one cup of white flour. Whisk together on the lowest speed, just until combined.

Add the wet mixture into the mixing bowl with the dry ingredients, mixing for 1-2 minutes.

Once a good dough ball forms, let the mixer (using a dough hook) knead the dough for 5-7 minutes.

Don’t skip this step. The kneading will lead to more aeration in the dough, and this means a fluffier texture in the final product.

If you don’t have a dough hook, you can also knead the mixture by hand. There’s nothing wrong with this method, it’s just physically taxing.

Cover the dough bowl with a damp dish cloth, and let the dough rise for an hour. 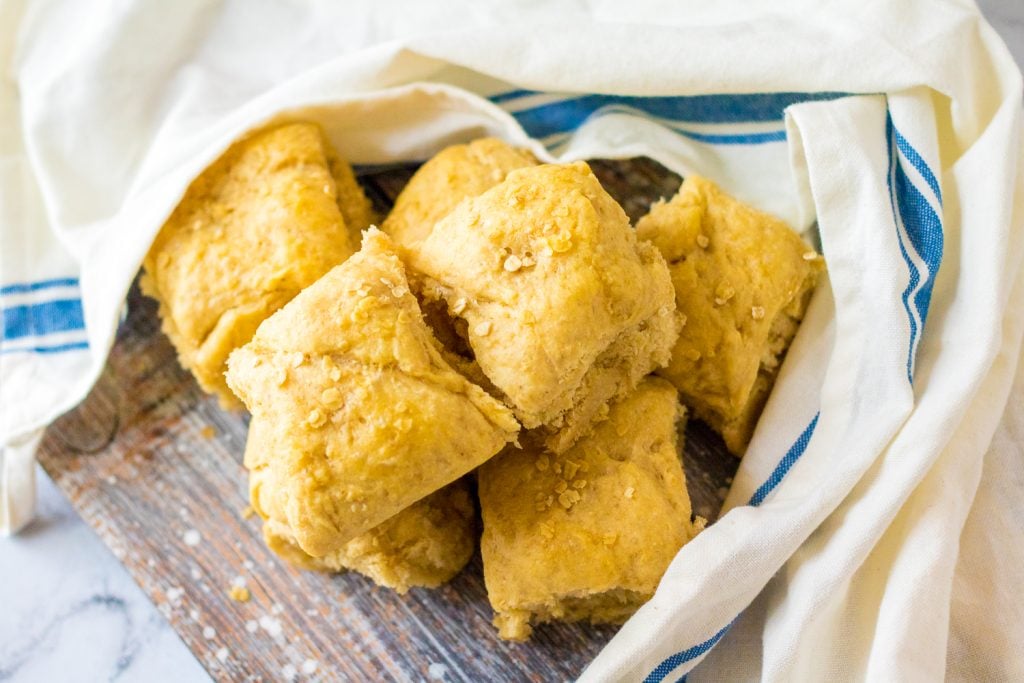 Once the dough’s risen, remove the damp dish cloth.

Flour your hands generously, this will prevent the dough from sticking and make it easier to shape.

Tamp the dough down, and begin by pulling a chunk of dough off.

Roll it between your hands until a uniform circle has taken shape. Place this in the prepared baking dish.

Repeat until 24 dough balls have been evenly placed into the baking dish.

Cover the dough balls, again with a damp dish cloth, and let them rise another 45 minutes.

Bake the oatmeal pull apart rolls at 350 degrees for 18-22 minutes, or until golden brown on top. 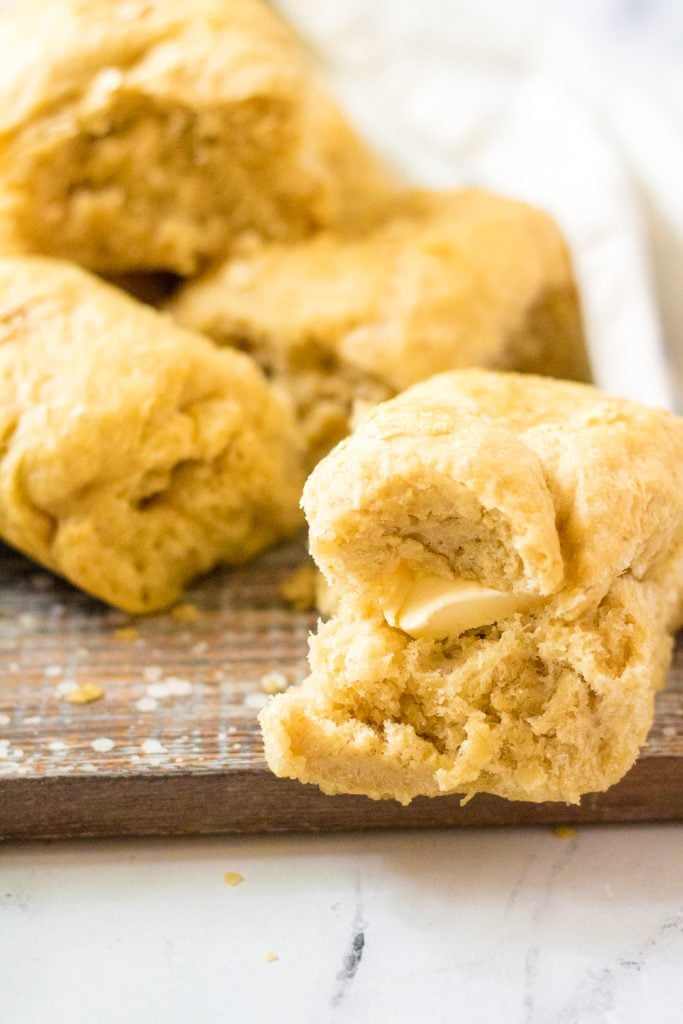 My Rolls Are Browning To Quickly, and I Don’t Want Them To Burn. Help!

So even when you follow the best of recipes, things can always still go wrong.

One of those truths especially extends to baked goods.

To prevent that, when they’re at the golden brown stage but still have a little while longer to cook through- tent the dish with aluminum foil.

The tenting will reflect the heat so that the rolls still finish cooking, but redirecting some of the intensity to the tops don’t get fried.

Other Bread Recipes You Might Also Want To Try:

A good bread is often a staple of any solid meal, check these other easy bread recipes out before you go.

If you’ve tried these OATMEAL PULL APART ROLLS, or any other recipe on the site, let me know in the comment section how it turned out, we love hearing from our readers! You can also follow along with me on PINTEREST, FACEBOOK, and INSTAGRAM to see more amazing recipes and whatever else we’ve got going on! 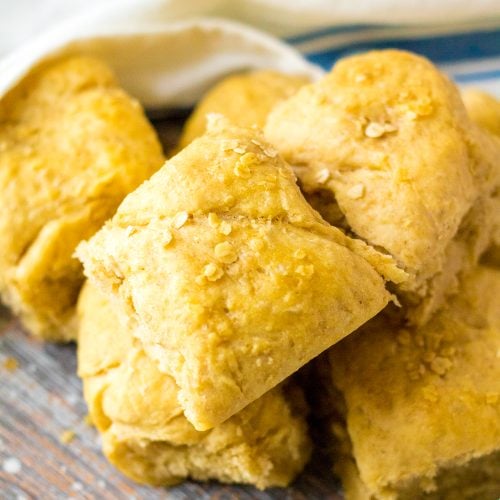 It doesn't get much better at any meal than when fresh baked bread is served. Get a batch of fluffy oatmeal pull apart rolls on the table, with ease following this simple recipe. It's perfect for any level of baker, and will pair well with just about any meaty entree you decide to serve it with.
5 from 1 vote
Print Pin Rate
Course: Appetizer, Bread, Brunch, Dinner, Snack
Cuisine: American
Prep Time: 15 minutes
Cook Time: 50 minutes
Total Time: 1 hour 5 minutes
Servings: 12
Calories: 263kcal
Author: Meaghan @ 4 Sons R Us