This birthday cake may look like your favorite fast food hamburger, but it’s just an illusion. Really this sweet big mac burger birthday cake is made out of yellow cake buns with brownie burger layers and all with butter cream frosting based toppings. It’s the perfect cake to celebrate that special burger lover in your life!

He’s a growing boy, for sure. I get that.

There are certain foods he prefers to eat, like poptarts and hotpockets and generally anything that’s heavily processed or full of caloric garbage, but in a pinch will grab whatever is closest to his face in the refrigerator and just work his way down through the shelves and drawers.

I’ve witnessed him eat droopy, on it’s last leg, I personally probably would have tossed it and sucked up the loss, celery, slathered in peanut butter, shoving it in his mouth while making a face and asking me why I buy such awful tasting stuff.

Last weekend we went out for burgers; I stood there awestruck, and mildly horrified as he ordered two full-size meals, while the hubs and I issued the standard rule the sons are all familiar with, “if you order it, you have to eat it. ALL of it.”

This didn’t deter him in the least and he smiled as he said he’d be good.

We watched him scarf down his own food and then immediately begin eyeing his brother’s plates to see if there were any stragglers who’d need help cleaning their plates. To his total disappointment, there weren’t.

The point of this story? Son # 1’s birthday was last week. His 16th birthday. The hubs and I don’t buy cakes, we make them.

When the sons were younger they would inundate me with all kids of creative possibilities and decorative ideas for their birthday cakes.

As they’ve gotten older, they pretty much leave it up to Mom. They just want to know that there will in fact be copious amounts of ice cream and frosting flowing.

With Son # 1, that’s food of any kind, and in desperate times, in any capacity.

What better cake for him, especially after his recent burger binge, than a Big Mac Burger birthday cake?!

It’s super easy to make, even for a total beginner at cake decorating.

The best part for us? Seeing his eyes light up when he saw the finished product.

Those cool Mom moments may come a whole lot less often as he’s gotten older, but they’re still just as special when they do.

Also, have you ever seen a ‘pretty’ Big Mac? Be honest. No, you haven’t.

Because really they’re kinda messy and never look that perfect way that they do in the commercials. Relax and know that your cake doesn’t have to look ‘perfect’.

In this case, messy is spot on. 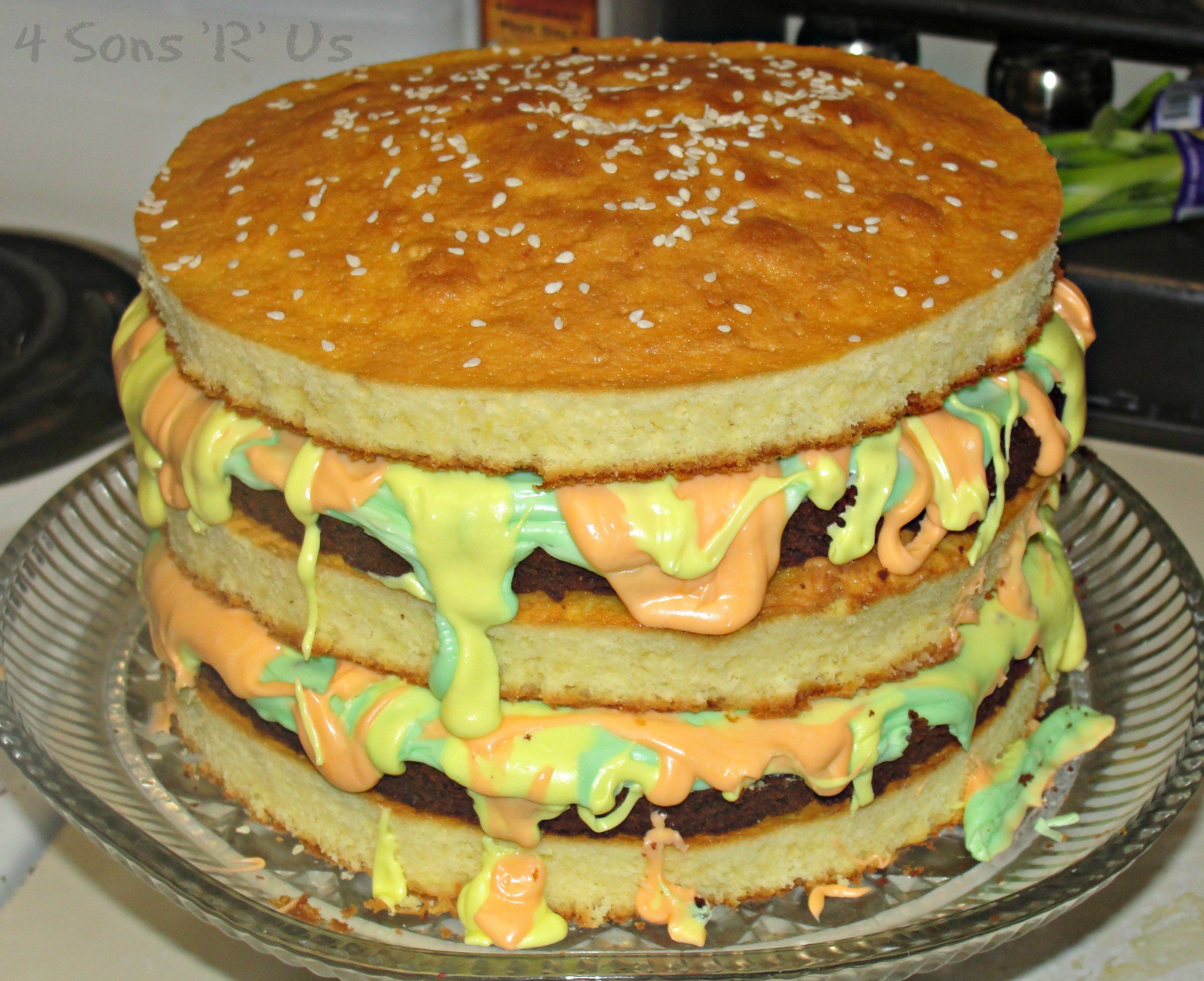 This birthday cake may look like your favorite fast food hamburger, but it's just an illusion. Really this sweet confection is made out of yellow cake buns with brownie burger layers and all with butter cream frosting based toppings. It's the perfect cake to celebrate that special burger lover in your life!
0 from 0 votes
Print Pin Rate
Course: Cake, Dessert
Cuisine: American
Servings: 15
Author: Meaghan @ 4 Sons R Us