Craving something a little different for dinner, but still need it to be quick & relatively easy? This Thai Peanut Pork Tenderloin is the tastiest way to shake things up. A pan seared, marinaded pork loin is infused with Asian flavor from the inside out. Finished off in the oven, this dish is sliced and served with a simple, savory peanut sauce and sprinkled with freshly chopped cilantro leaves. 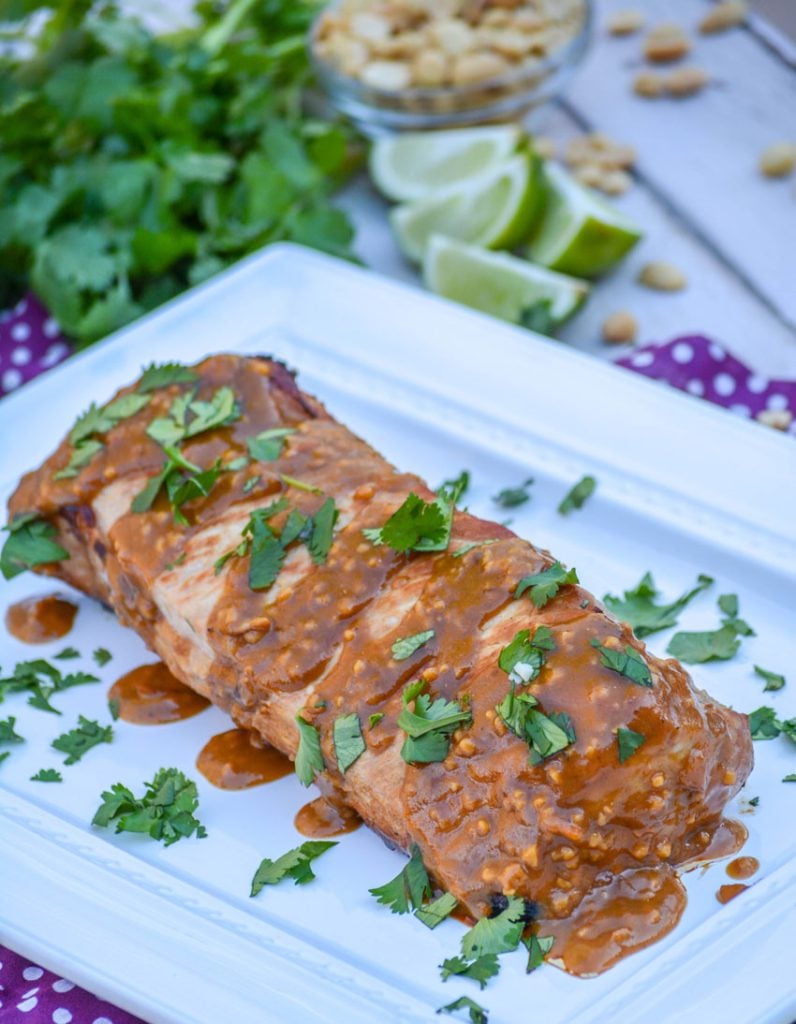 Thai food rocks the hubs world. I kid you not, the hubs could eat it every single day, for any meal, and be quite a happy camper.

I am not nearly the fan that he is. 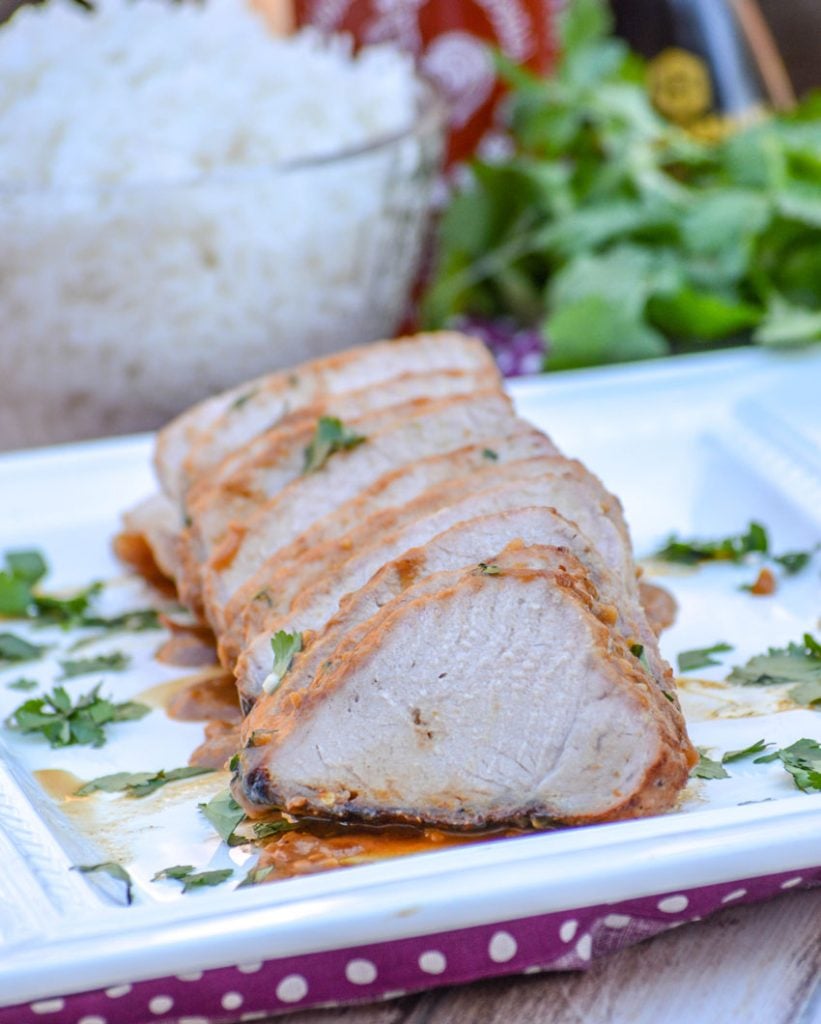 I remember struggling through menus trying to find something that appealed to my pallet as he took me to various Thai dives when we were dating.

Luckily, the company made it all worth it! 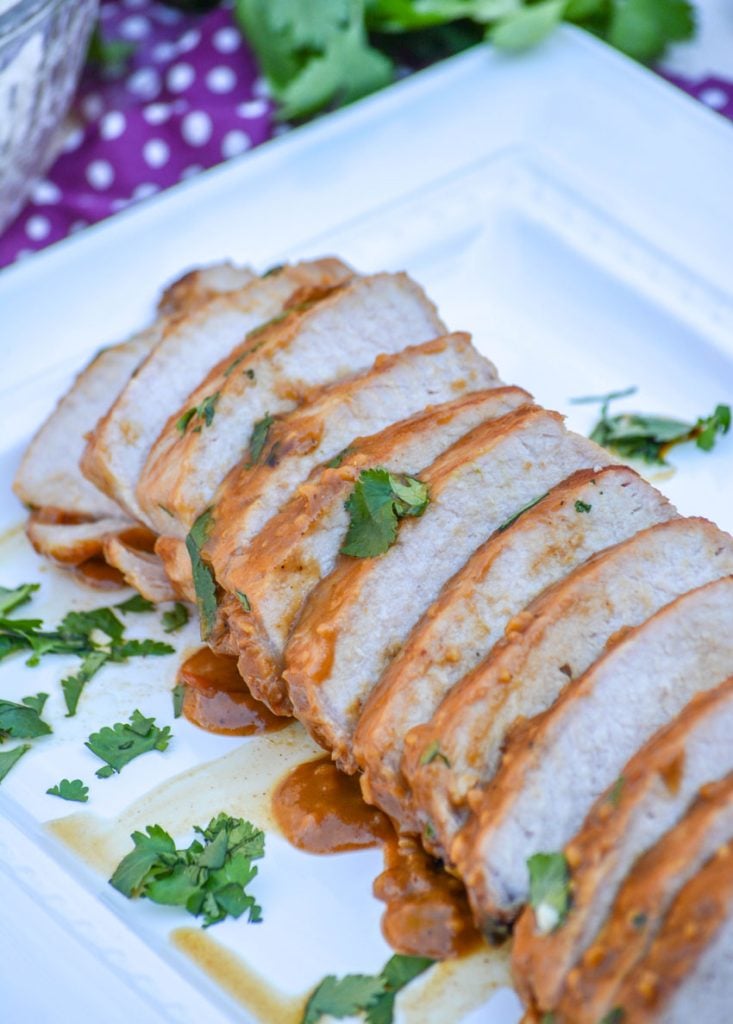 That and there was always something I could find to enjoy. The real problem for me was the over abundance of peanuts. Peanuts and pork.

Two seemingly totally different flavors that blend flawlessly in this recipe, and many another Thai dish. 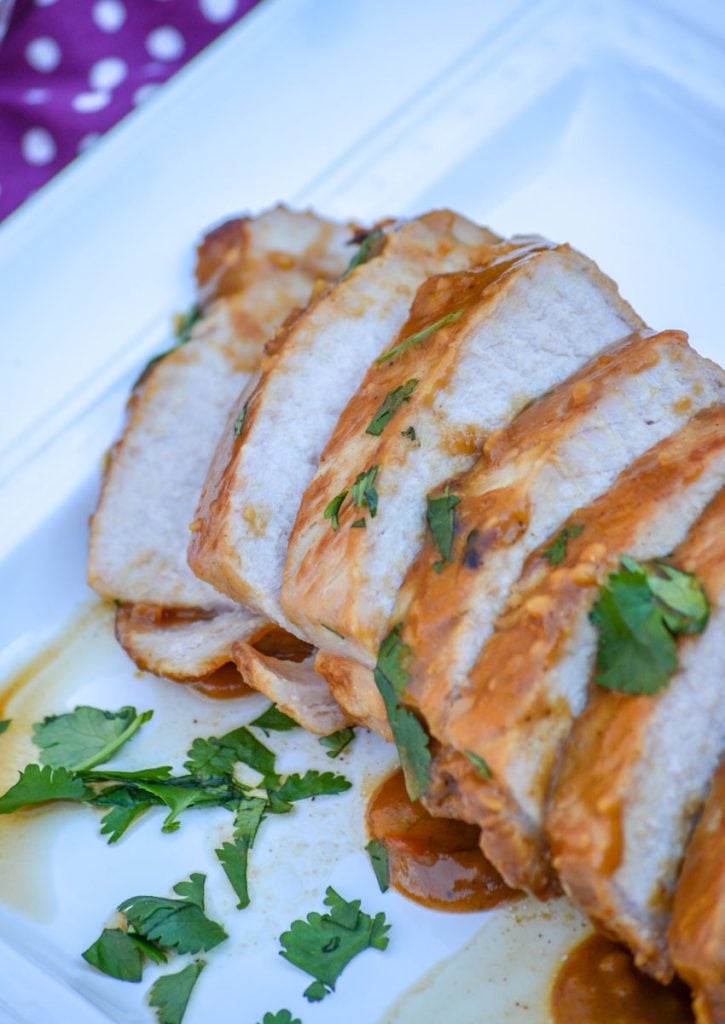 Here the tenderloin is taken to the next scrumptious level with the help of some peanut sauce. Go to your local grocery store right now, and I promise you its ethnic section (even the smallest) has Thai peanut sauce, probably even a Thai AND American made version.

The stuff just seems to get more and more popular as time goes by. This key ingredient doesn’t disappoint even in this quick, from scratch, batch version.

Thai. Peanut. Pork. Tenderloin. Let’s let that sink in for a moment. And let’s take another look at these pictures.

Not the best staged photos, but still mouth-watering. Drool-worthy really.

Go ahead, lick the screen. Nobody’s watching. You might even be a little more excited when you discover just how easy this recipe is either. 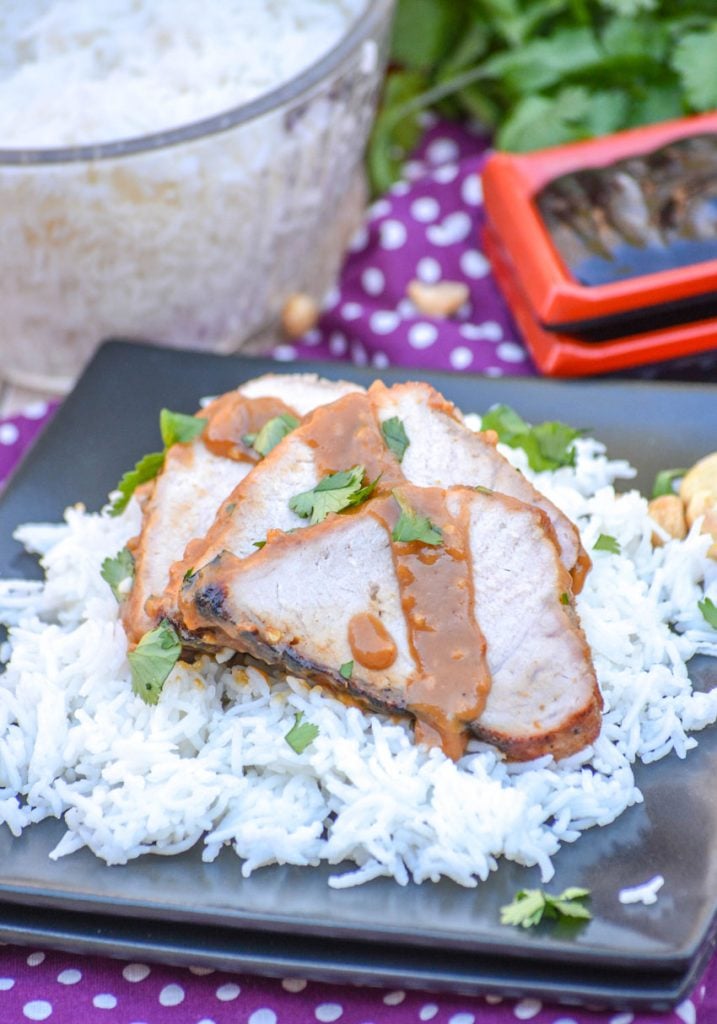 The pork’s rinsed, patted dry, salted & peppered, and placed in a large zip locking bag. The marinade is then poured out overtop, and the bag’s sealed squeezing out any excess air at the same time.

The pork’s then allowed to marinade in the refrigerator for at least 30 minutes, but up to 8 hours or overnight.

Since this meat needs to safely transition from the stove top to the oven, and needs a really good sear- I’d suggest using a heavy bottomed, oven safe dish like a cast iron skillet or Dutch oven.

Add vegetable oil to your skillet, and let it get nice and hot over medium high heat. Since it’s not really enough oil to use a thermometer to gauge the temperature, watch for it ‘shimmering’. It’s the best way to eyeball when it’s ready.

The pork’s then added to the skillet and seared on all sides until it’s beautifully browned. This should take roughly 8-10 minutes TOTAL. The whole skillet’s then transferred to the oven, which has been preheated to 425 degrees, and roasted for 20 minutes. 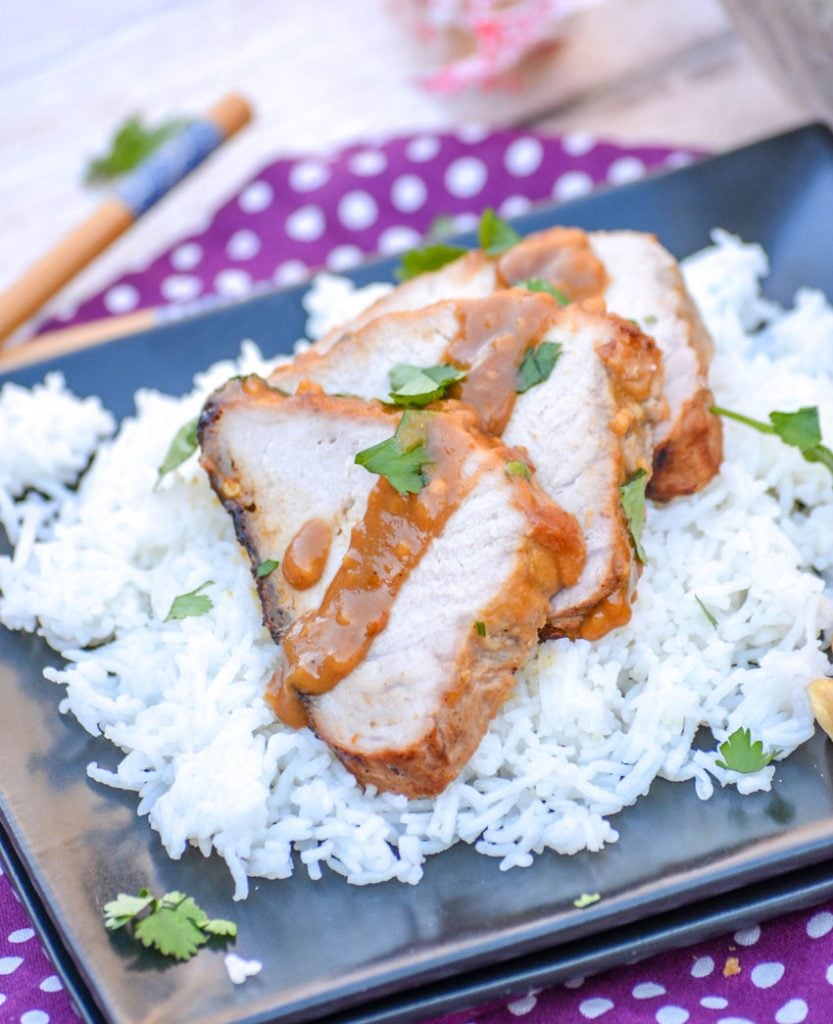 This time we do want to use a meat thermometer. It’s a much better way of ensuring the meat’s cooked through without doing any guessing, slicing, baking some more and possibly repeating the process several times.

When the meat thermometer reads 160 degrees, inserted into the center of the thickest part of the pork tenderloin you know it’s done.

Remove the pork from the oven, and let it rest a full 10 minutes before slicing and serving.

Now it’s time to make the Thai peanut sauce. We reuse the marinade as the base. Don’t panic. When all’s said and done it’s been heated and boiled, thus making it 100 % safe for consumption despite having bathed the raw meat.

So while the meat’s resting, transfer the marinade to a small sauce pan, and stir in 1/4-1/2 cup of water. Bring the sauce to a boil, then reduce the heat and simmer until the sauce has thickened.

Drizzle the sauce out overtop of the Thai peanut pork tenderloin, slice, and sprinkle with freshly chopped cilantro before serving. Serve over top, or with a side of steamed white rice.

It may sound like a lot, but at it’s heart this is a very basic tried & true recipe for a tender pork tenderloin. With it’s Asian infusion it’s a delicious new spin on dinner, and the simple peanut sauce really kicks the whole thing up a notch.

Other Pork Recipe Ideas To Spice Up Supper: 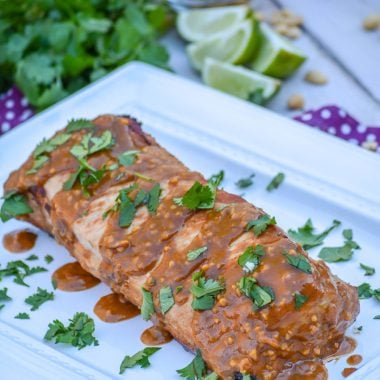 recipe adapted from Let's Dish
Did you make this recipe?Share it on Instagram @4sonsrus or tag #4sonsrus!