Thick and hearty, this bacon cheddar chowder is a stick to your ribs meal served in a simple soup bowl. Made in the convenience of your Instant Pot, it’s a great go to recipe to have on hand on busy nights when the weather turns cold. 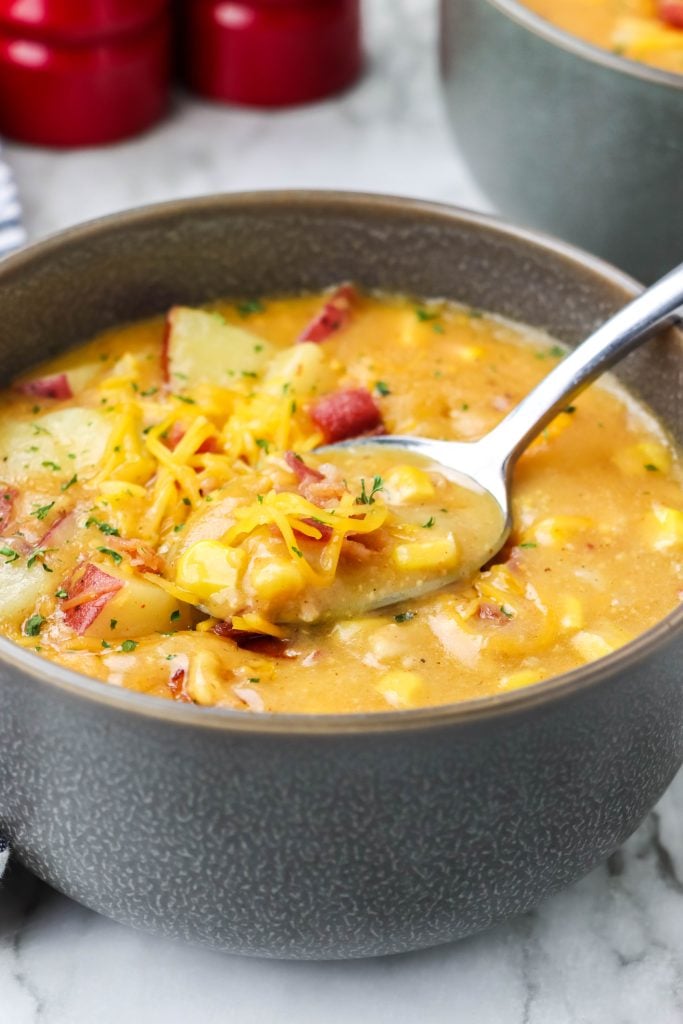 “Brace yourselves. Winter is coming.”

Though most of the snow has melted here, the cold weather is far from over.

The wind is still whipping with biting wind chill temps, and more snow is forecast-ed to arrive tonight/tomorrow. 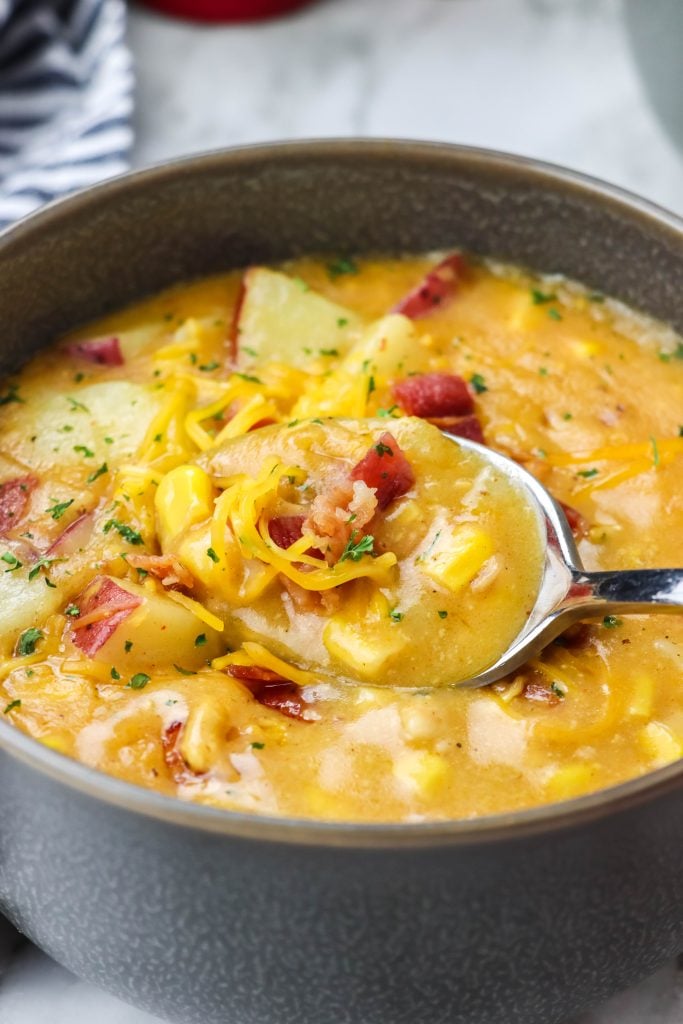 We walked out the door this morning dressed like Eskimos ready to face the frozen tundra and it still felt like we had no clothes on.

Even all bundled up, the freeze still found a way in.

Days like this always call for something extra hearty and warm to help us ‘thaw’ in the evening.

This thick, creamy instant pot chowder is the perfect way to mentally and physically decompress on a cold, winter night. 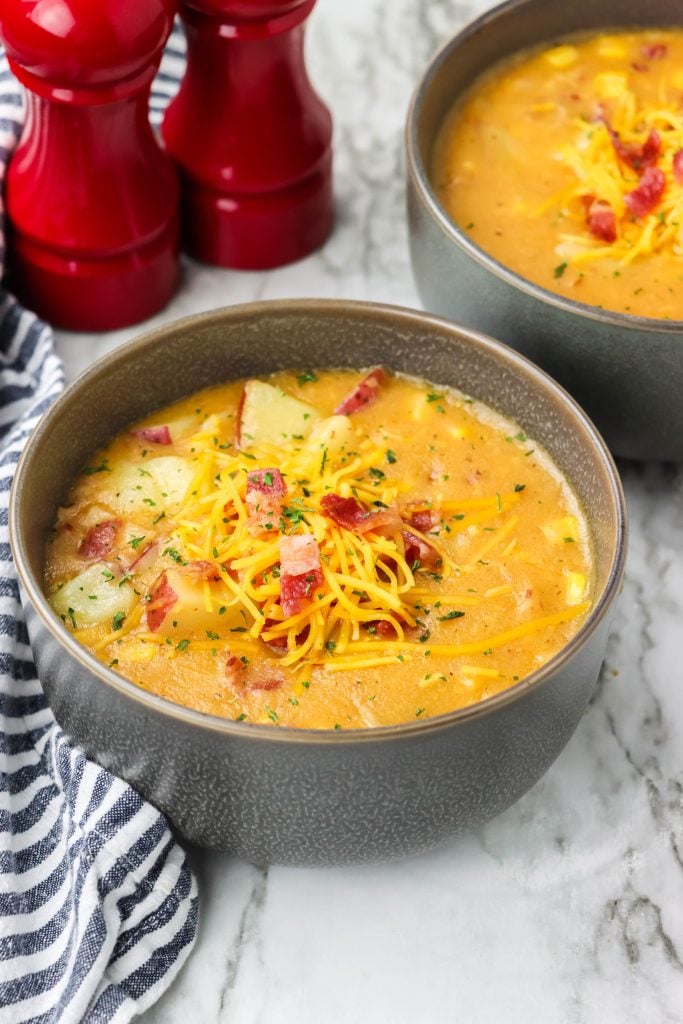 What Exactly Is A Chowder?

There are many trains of thought on this topic, and the answer you get may very well depend on the region you’re in when asking.

However, if I were to break it down in it’s most simplest form: a chowder is a rich, thick, chunky soup that usually has a white base. Manahattan-style being a rare exception.

Most chowders include some form of milk or cream in the base.

They also have a similar make up, no matter the type.

All chowders typically have 5 distinct parts that make up the whole:

That’s it really. When you break it down to basics, a chowder is really simple.

It’s all about the fundamentals and then building the flavors from there. 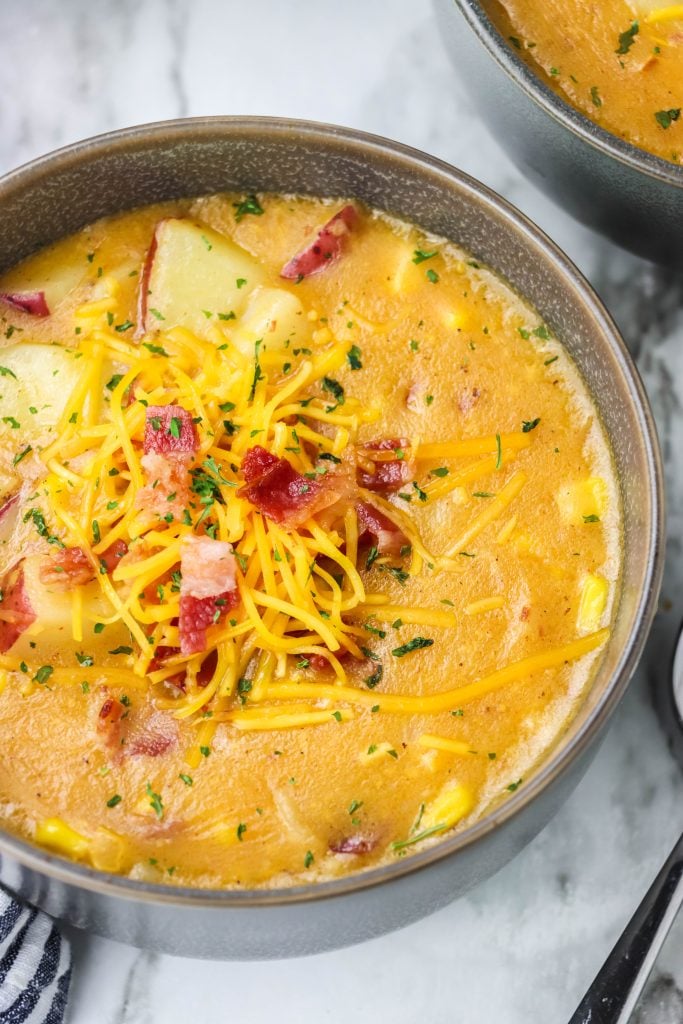 Where Does The Name Come From?

While most of my family is now firmly entrenched in the South and Southern cooking traditions, they all actually came from up north.

This means some of those traditions, like chowder, and there back-stories came with them.

Supposedly the name itself comes from the French word for a specific type of cookware called a ‘chaudiere’.

My Aunt & Uncle from Maine even had a specific cast iron pot, lovingly referred to as their ‘chowder pot’, always pronounced CHOW-DAH.

And while the term may have French origins, it’s been wholeheartedly embraced by Americans.

They had a great recipe for a New England style clam chowder that I revamped for my Instant Pot.

And in Virginia when the weather gets colder, we tend to pull out our heavy bottomed soup pots and whip up our own renditions of chowder.

The most common one is a variety of potato, bacon, and corn.

This time though, I decided to throw everything in my pressure cooker and it made what’s now our family’s absolute favorite bacon cheddar chowder. 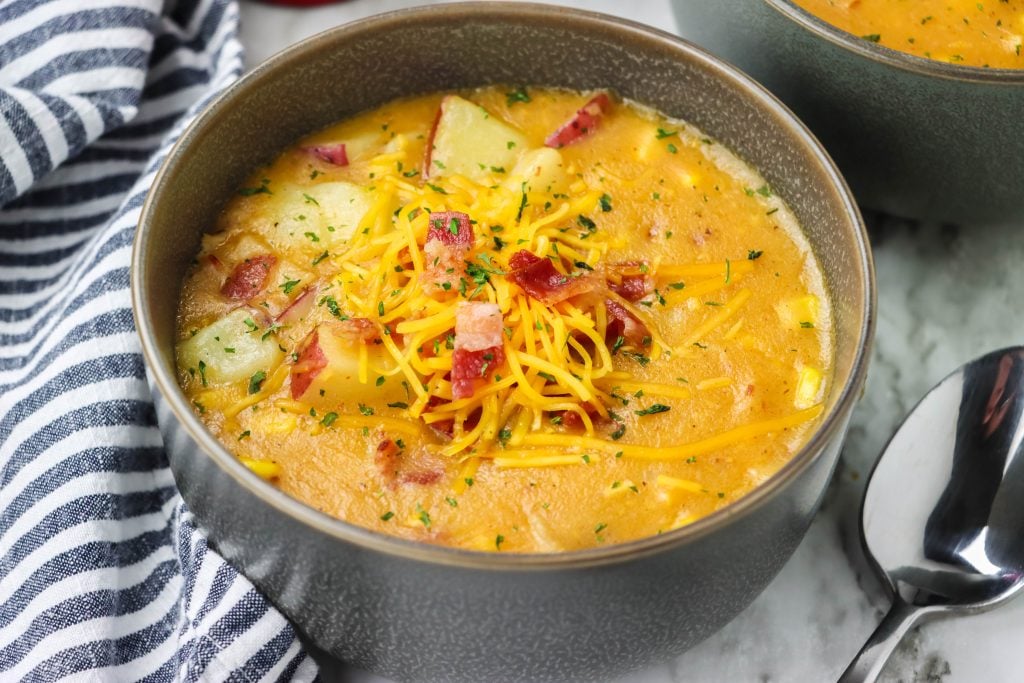 How To Make In The Pressure Cooker

Hit the saute button on your pressure cooker, and let it warm up for a minute or two.

Once it has, add the bacon pieces and stir while sauteing them until browned to your preference. I like mine nice and crisp.

Using a slotted spoon, transfer the cooked bacon pieces to a layer of paper towels to sit while the excess grease drains off.

Discard any excess amount of grease carefully from the pot liner.

Add the butter, onions, and garlic to the pot and allow them to saute, again stirring, just until the onions have softened and become translucent.

Don’t skip the stirring. This prevents anything from sticking to the bottom of the pot, which is crucial for success.

Any of those stuck on bits will burn during pressure cooking, and result in the dreaded ‘burn notice’.

Stir in the flour until it’s coated the veggies and combined. Let it saute for 1-2 minutes, just until slightly thickened and so that any residual flour-y taste has cooked off.

Add the potatoes, water, seasonings, bullion, and corn to the pot, stirring to evenly incorporate.

Add the lid, turning to close, and make sure the vent valve is set to the sealing position. Set the soup to cook on high pressure for five minutes.

Once the timer beeps to indicate that the cooking is complete, let it sit and naturally release for another five minutes.

Carefully turn the valve to vent, making sure to avoid the hot steam, and let it finish releasing any remaining pressure.

Remove the lid, and stir in the shredded cheddar cheese until melted and combined.

Stir in the crisp bacon, or save it to serve on top.

Ladle the soup into bowls, and serve it with your favorite toppings! 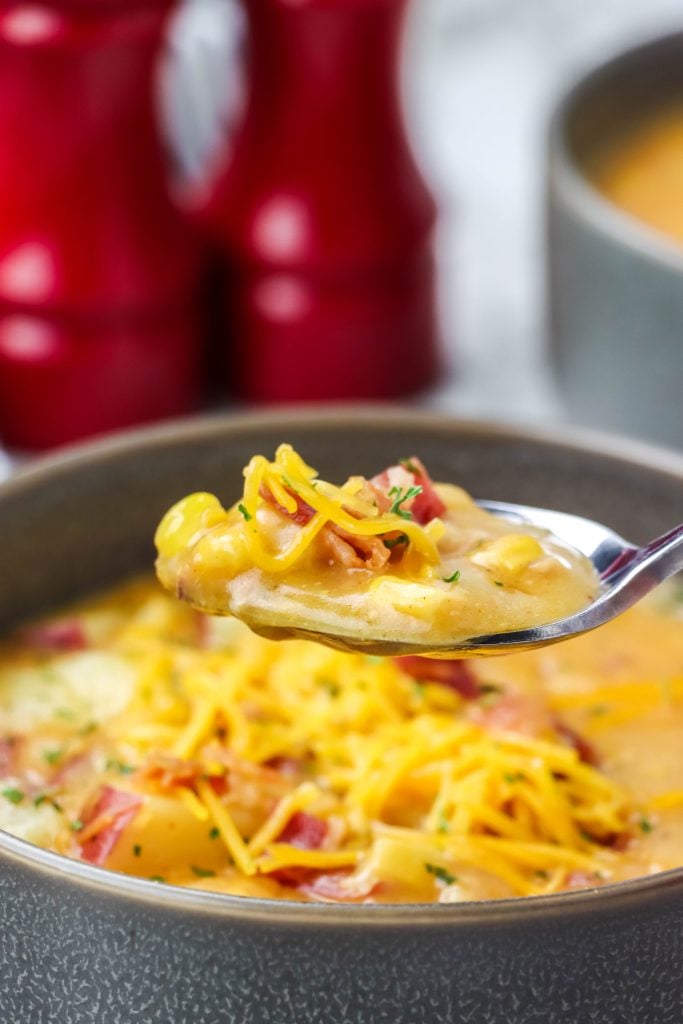 Using Potatoes As A Natural Thickener

Using potatoes as a soup thickener is convenient in many recipes. It’s one of my favorite ways to make a really thick & creamy potato soup.

Potatoes thicken the soup as they break down during cooking.

Since I wanted to maintain most of my potato chunks, I used some flour to help aid in the thickening process.

If you’re ok with, or prefer a less chunky style soup you can omit the flour and let the potatoes do all the work.

It can be hard finding good ideas to pair with soup beyond the obvious simple salad and slice of bread.

Need some inspiration? Here you go:

While soups are trending up when the temperatures begin to drop, do yourself a favor and go for something that will truly warm you up from the inside out.

When that’s the case, a bowl full of chowder is the only thing that will do- make sure you have your Instant Pot ready for mixing up a batch of this rich, savory bacon cheddar chowder.

If you’ve tried this INSTANT POT BACON CHEDDAR CHOWDER, or any other recipe on the site, let me know in the comment section how it turned out, we love hearing from our readers! You can also follow along with me on PINTEREST, FACEBOOK, and INSTAGRAM to see more amazing recipes and whatever else we’ve got going on! 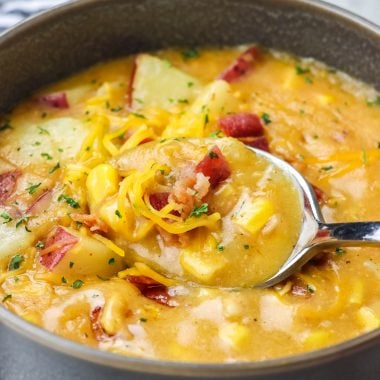 Thick and hearty, this bacon cheddar chowder is a stick to your ribs meal served in a simple soup bowl. Made in the convenience of your Instant Pot, it's a great go to recipe to have on hand on busy nights when the weather turns cold.
5 from 2 votes
Print Pin Rate
Course: Dinner, Main Course, Soup
Cuisine: American
Prep Time: 10 minutes
Cook Time: 10 minutes
Total Time: 20 minutes
Servings: 6
Calories: 382kcal
Author: Meaghan @ 4 Sons R Us
Prevent your screen from going dark