Jalapeno cheddar cornbread is the best cast iron skillet cornbread recipe ever! Spicy peppers and gooey cheese take this side dish to the next level and make it the perfect pairing for chili. 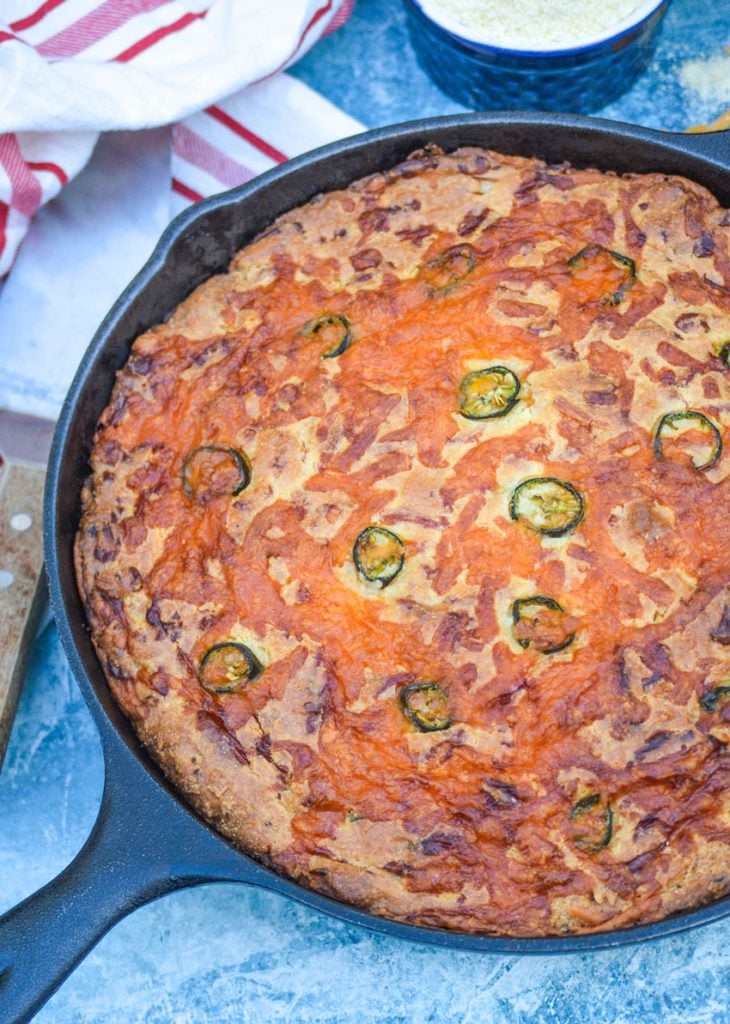 We love hot and spicy food in this house.

That goes double if the spice is combined with the rich, gooey goodness of cheese.

And well it counts triple if the spicy, cheesy food in question is also full of comforting carbs.

That’s exactly what this yummy skillet buttermilk cornbread is.

It’s a classic cornbread recipe loaded with extra flavor from a diced jalapeno and cheddar cheese.

Plus it has tons of texture thanks to a generous helping of creamed corn.

The result is a delicious spicy, cheesy treat with amazing crispy edges that we can’t get enough of!

Why make cornbread in a cast iron skillet?

Sure, you can use another baking dish to make your cornbread, but I highly recommend your cast iron for this.

Cast iron creates the perfect cornbread because it distributes the oven’s heat evenly allowing for even cooking throughout the bread.

Plus, it allows you to preheat the skillet in the oven, which gets it nice and hot.

This allows a crispy edge to form along the skillet that is just so dang yummy. 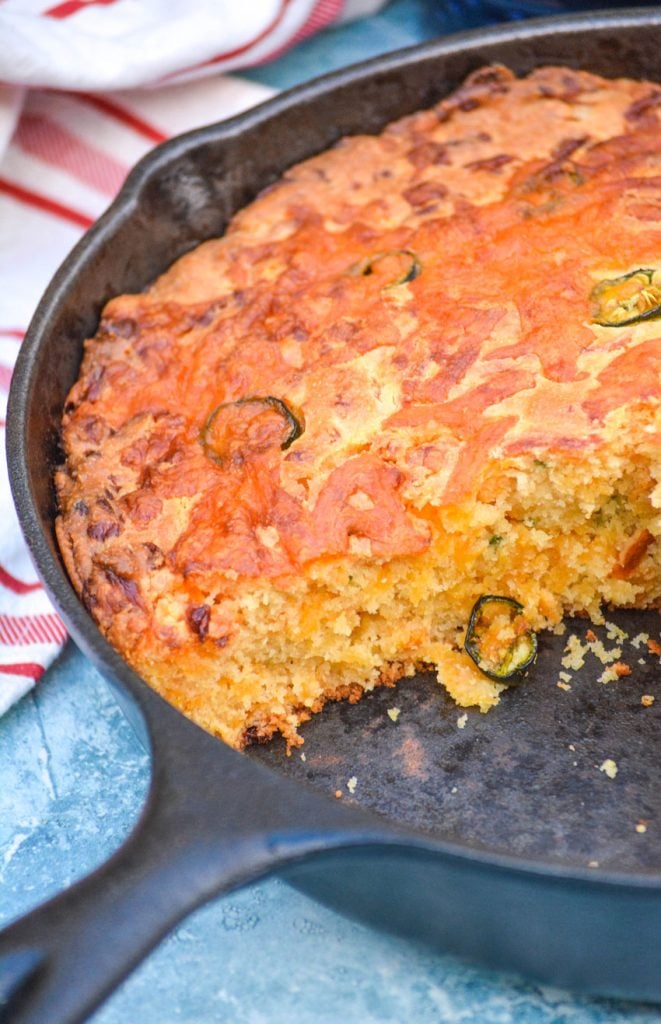 To make it you’ll need: 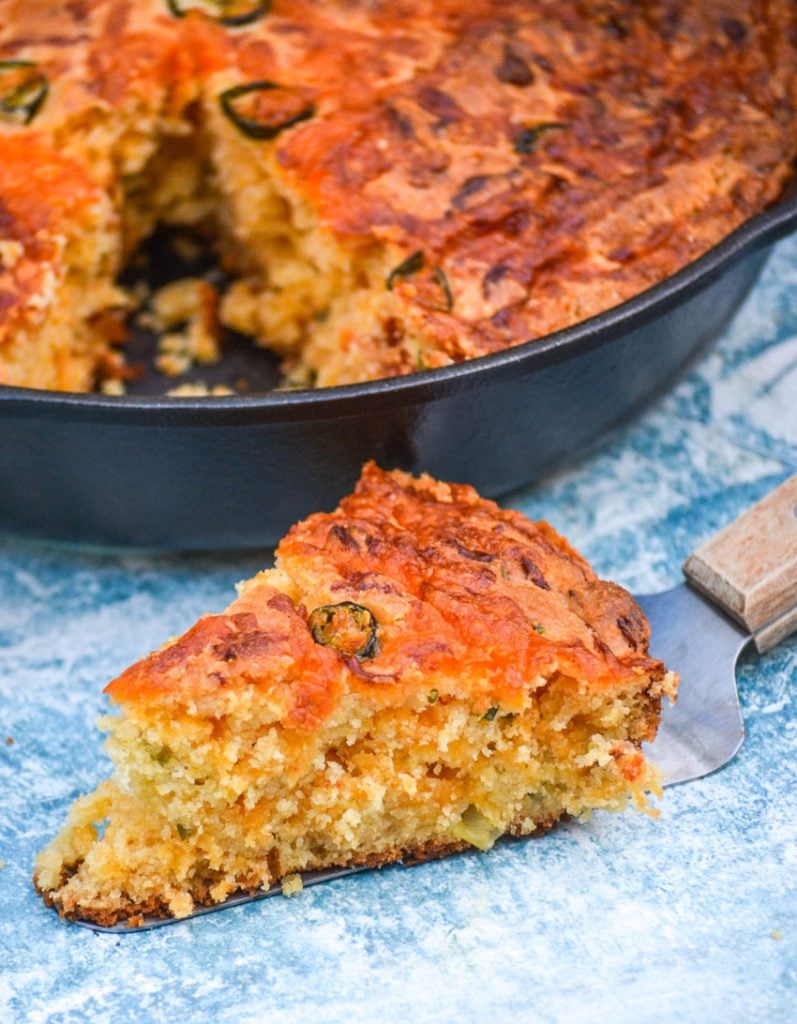 Like most cornbread recipes, this cast iron cornbread is so easy to make!

To do it, start by adding the oil to a 10″ cast iron skillet. Swirl it around to coat the skillet evenly.

Put the oiled skillet in a cold oven and then turn the oven to 400 degrees.

While the oven heats with the oiled skillet inside, add the flour, cornmeal, sugar, baking powder, baking soda and salt to a large mixing bowl and whisk them together.

Once the dry ingredients are combined, add the buttermilk, melted butter and eggs.

Whisk them into the dry ingredients until they are evenly combined.

Now you can fold in a cup of the cheese, the diced jalapeno and the creamed corn with a spatula.

With a heavy oven safe potholder, carefully remove the hot skillet from the preheated oven and swirl the oil one more time.

Then pour the batter evenly into the hot skillet, scraping the bowl with a spatula as needed.

Carefully return the skillet to the oven and bake it for 20-25 minutes or until a skewer in the center comes out clean and the cheese makes a golden crust.

At this point, remove the skillet from the oven and let it rest for 10 minutes.

After it has rested, run a butter knife around the edges of the skillet to release the cornbread.

Then slice, serve and enjoy! 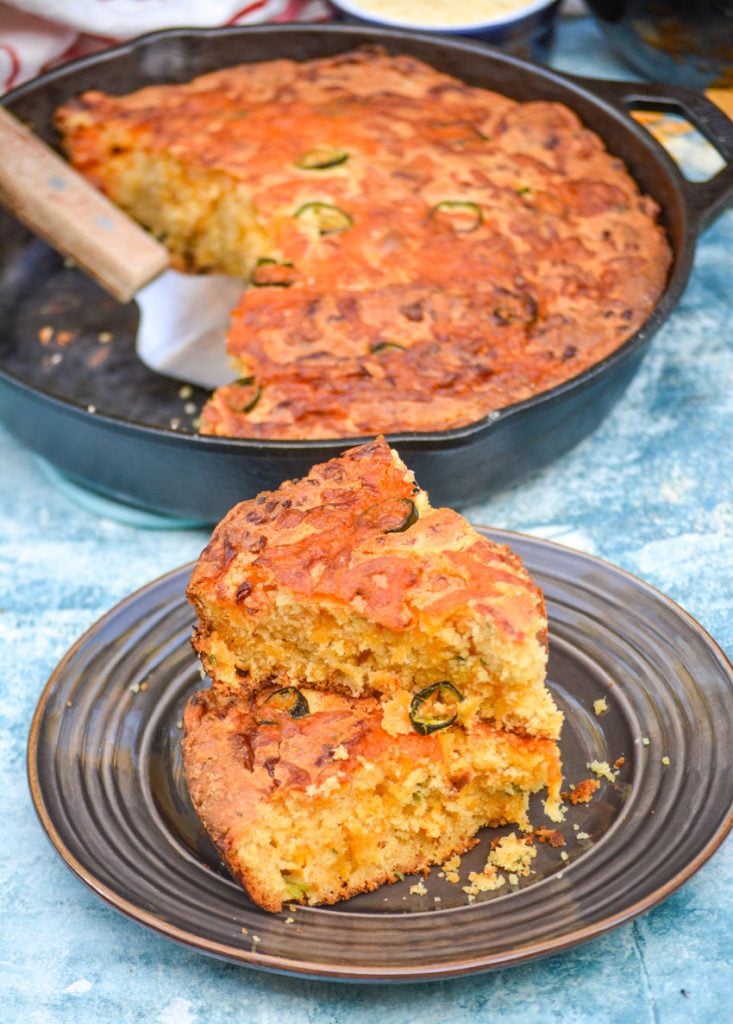 You can store any leftover cornbread in any airtight container in the fridge for up to 4 days.

To reheat it, just remove it from the container and pop it in on a baking sheet and warm it in the oven.

You could also wrap leftover cornbread in plastic wrap and put the pieces in a freezer safe bag.

Freeze leftovers for a few months, defrosting and reheating prior to serving.

While I love cornbread all by itself, I’ll never turn away a slice served with some garnishments.

Our favorite ways to top a warm slice of cornbread include: 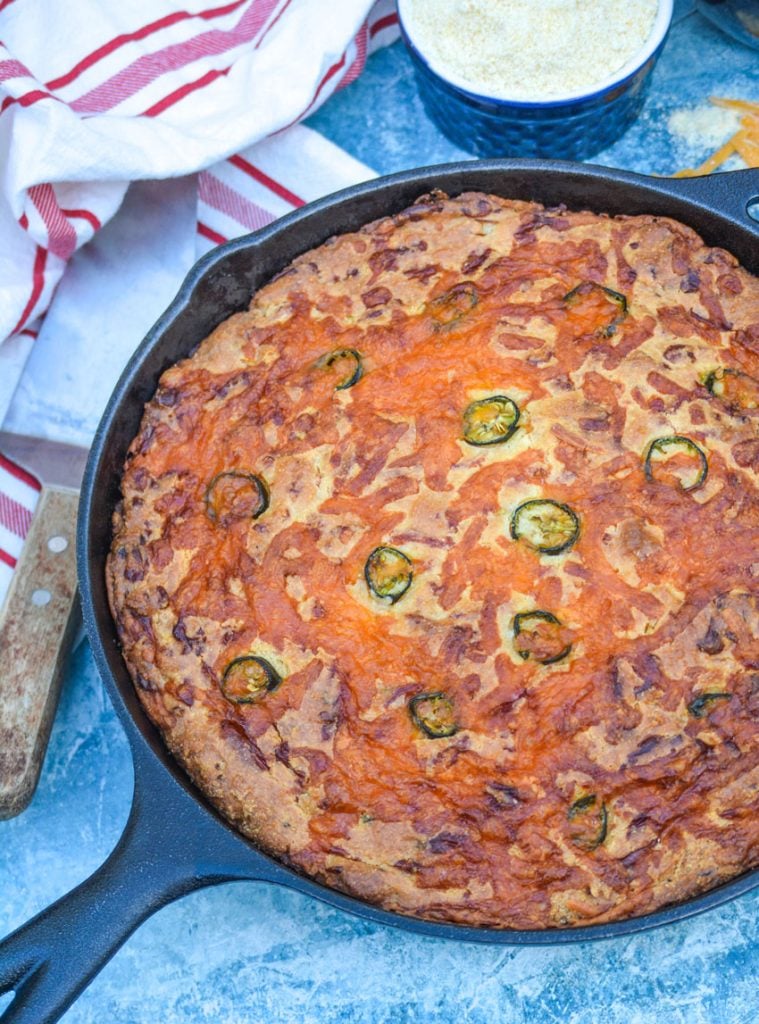 What to Serve with Cornbread

We love this jalapeno cheddar cornbread!

It is our favorite way to add a little kick to the classic side dish.

Looking for ideas to serve with it?

If you’ve tried these JALAPENO CHEDDAR CORNBREAD or any other recipe on my site, let me know in the comment section how it turned out, we love hearing from our readers! You can also follow along with me on PINTEREST, FACEBOOK, and INSTAGRAM to see more amazing recipes and whatever else we’ve got going on! 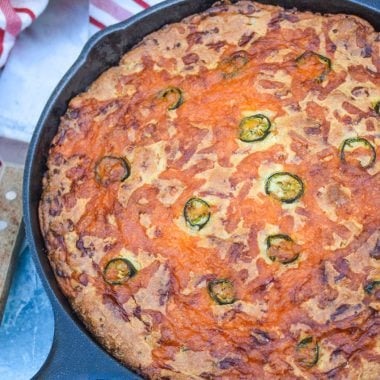 recipe adapted from Garnish & Glaze
Did you make this recipe?Share it on Instagram @4sonsrus or tag #4sonsrus!