Mini seasoned meatloaves sandwiched in between crisp white onion slices are what makes up these delicious onion bombs. They’re a savory, flavorful dinner option that can be grilled, baked, and even cooked over a warm campfire. Quick & easy to assemble, they’re also a great way to use ground beef. 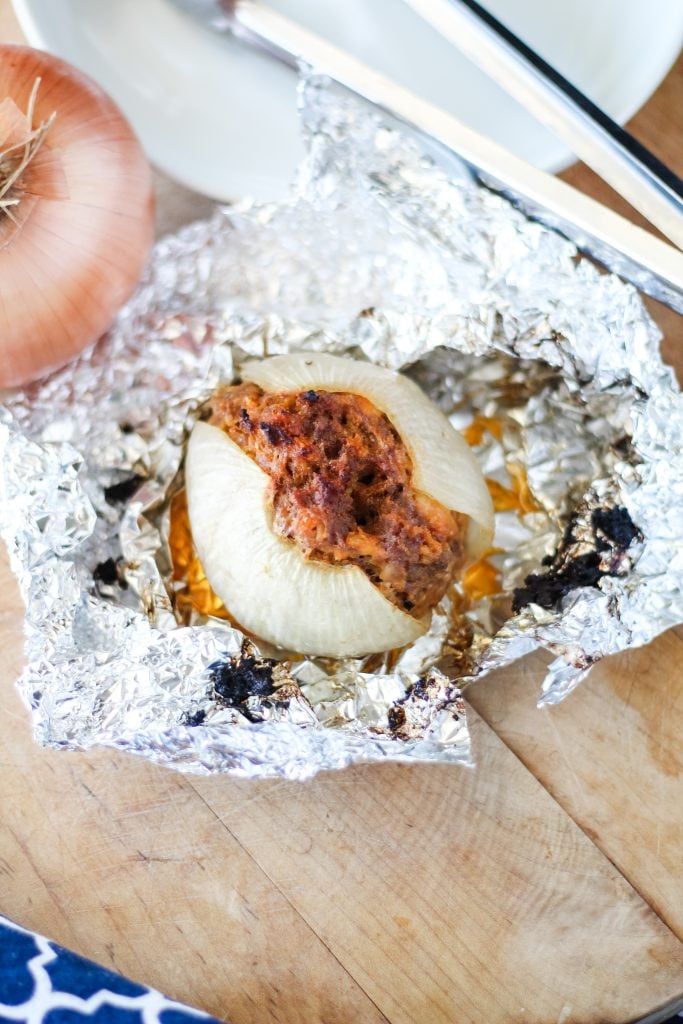 Friday it was warm enough for sun-bathing. The next morning?

We woke up to freezing rain and whipping wind. It’s nuts.

Like welcome to the state where you can get sunburn and frostbite in the same week, nuts.

But now that we’re at least ‘officially’ in Spring, the weather should trend on the side of at least moderately higher temps, and around these parts that’s all we need. We’ve got two wardrobes, winter and summer.

First warm day? Pull out the tank tops and shorts.

Another thing that makes its debut with the first Spring-like day?

Not to say we ever actually put it away, but it’s a lot easier grilling out at a cloudy 67 than in sleet or snow.

And these onion bombs are one of our favorites to make during grilling season. 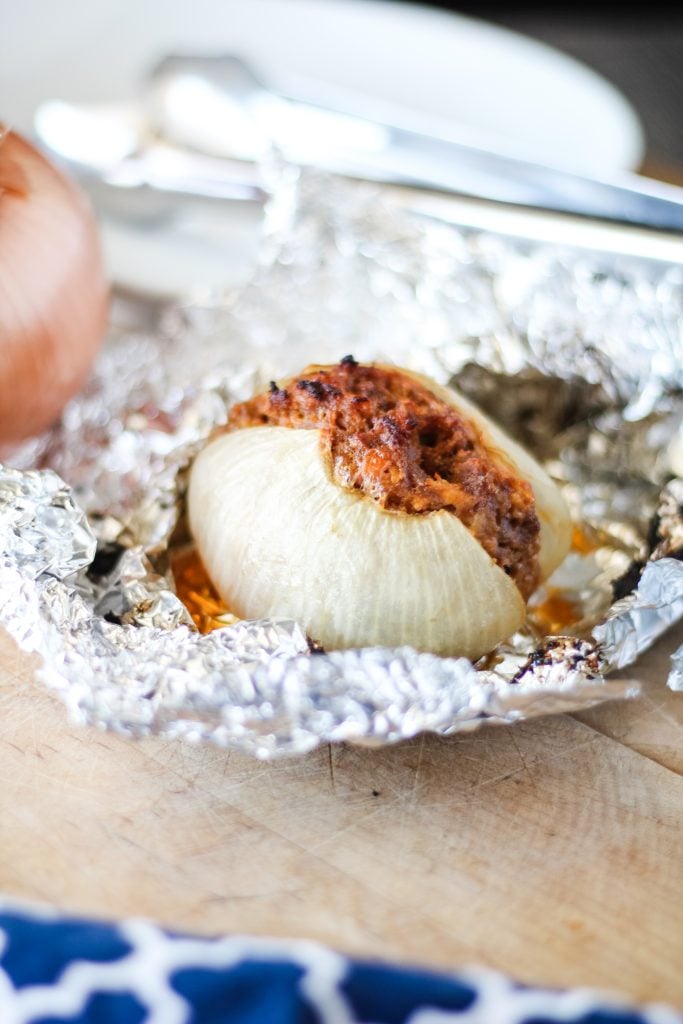 Essentially, an onion bomb is an onion stuffed with a seasoned ground beef mixture.

They can be smoked, grilled, or even oven baked. Sometimes they’re even wrapped in bacon.

They key is the mixture being liberally sandwiched inside an onion layer, and cooked until the beef is done throughout.

Kind of like a little personal meatloaf, with all of the flavor of a caramelized onion infused in every bite.

If you haven’t had the pleasure of enjoying one yet, let me tell you- they’re truly tasty, and easier to make than they may seem. 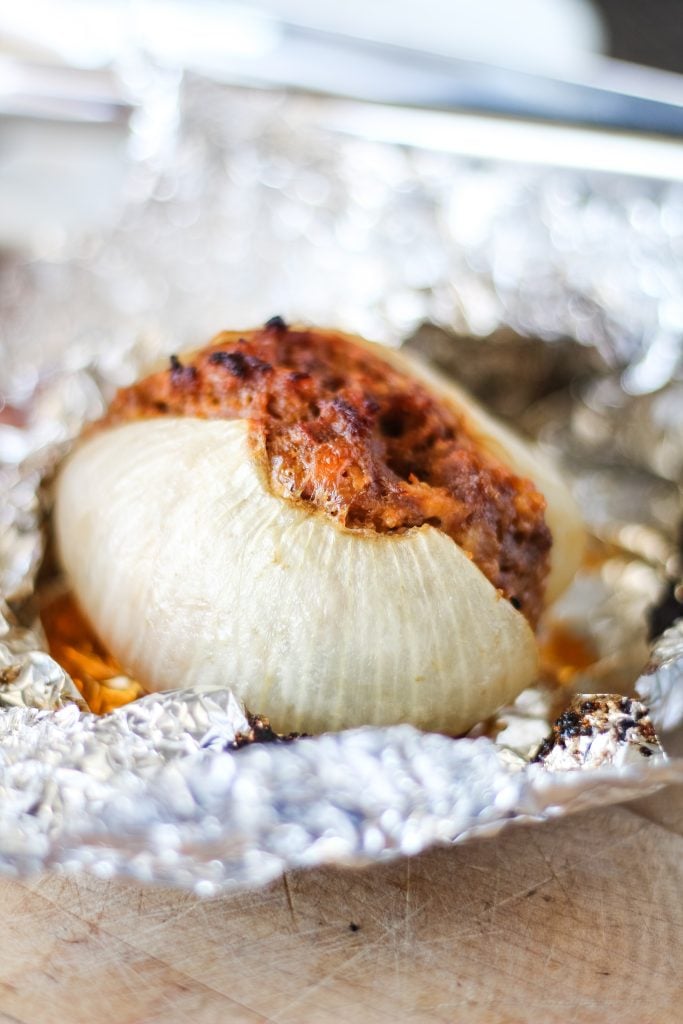 These onion bombs couldn’t be any easier to throw together and they taste incredible.

Cut a large white onion in half; from the top down to the bottom, right down the middle.

Again- top to bottom, NOT sideways.

Carefully separate the layers from both halves, matching up the matching halves when done.

Be extra careful not to break or tear the onion when separating, as this can happen easily.

Add all of the remaining ingredients to a large mixing bowl.

You’ll want a large bowl because it’s got room and easy to move around when mixing the meat together.

Mush and mash everything together until evenly incorporated into a seasoned meat-mixture.

I recommend doing this by hand. It may be cold, but with clean hands it’s the quickest, easiest, and most efficient method.

If you’re squeamish about your hands in raw meat, you can use a sturdy wooden spoon or you can mix it in the bowl of a stand mixer with the paddle attachment.

The end result should have a texture like meatloaf, slightly soft and evenly combined. 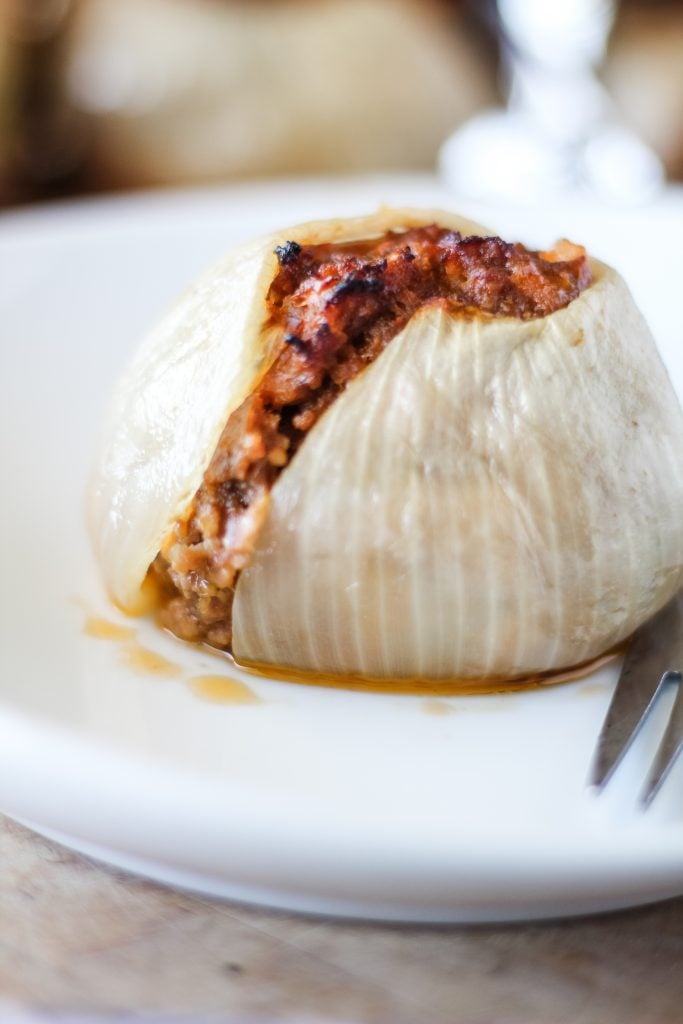 Start by forming a large meatball in your hands. There’s really no way around using your hands at this point.

See why I said hands were the best way all along?

Starting with the largest pair of onion halves, sandwich the meatball between them.

If it doesn’t quite fill up the onion, add a little extra meat. Carefully press the onion halves around the meat to ‘seal’.

Continue filling the rest of the onion halves with the meat mixture, until it’s all been used.

Make sure to leave enough excess foil so that there’s a little twist at the top.

They should resemble a Hershey’s kiss in that way.

This little twist at the top will allow you to safely place them on the grill, and also safely remove them when they’re hot.

Carefully add them to a hot grill, and let them cook for 8-10 minutes.

Flip them over onto their other side, and grill an additional 8-10 minutes.

Use a pair of sturdy tongs to remove the grilled onion bombs to a waiting plate or cutting board.

Let them rest 2-3 minutes before carefully pealing back the foil.

Pluck them from their foil baskets and transfer them to plates to serve.

Discard the grease filled foil when it’s cooled long enough to be safe to do so. 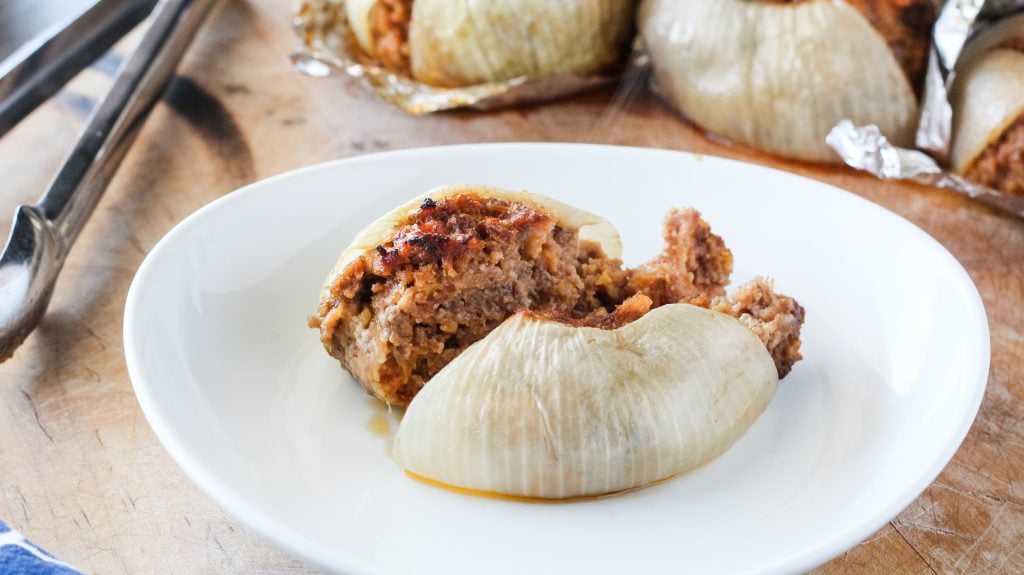 Can These Be Baked In The Oven?

These could just as easily be called meatloaf stuffed onions, and they’re easily adapted.

I know the warmer weather hasn’t reached everywhere yet, but that’s OK.

These can just as easily be baked in the oven, at 400 degrees for about 45 minutes in a covered casserole dish, without any sacrifices in the flavor infusion dept.

Do you enjoy camping?

We do, and usually we stick to the easy realm of hamburgers, hot dogs, sandwiches, and cans of soup.

But guess what makes a perfect meal cooked up over a camp fire?

Stuff ’em just the same, wrap ’em up in tin foil, and cook ’em over the hot camp fire coals for about 45 minutes, flipping halfway through.

As always, be careful when unwrapping to avoid getting burned by the very hot steam waiting to escape. 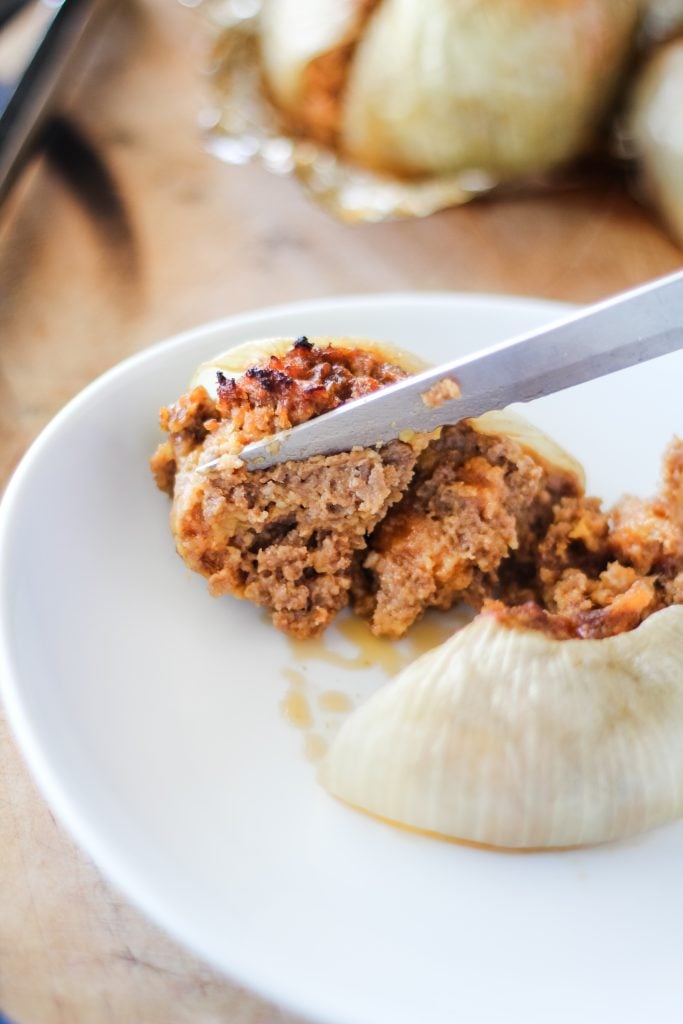 Other Grilled Recipes To Try

These onion bombs are a staple on our menu during all seasons. They’re quick and easy to throw together, and fun for everyone involved.

While my kids may not enjoy the outer onion, they all agree that these are almost as good as Grandma’s meatloaf and never have a problem polishing their plates when these are serve for supper.

Looking for other family-friendly grilling ideas?

Give any of these a try, and add a little pizzazz to your grilling game!

If you’ve tried these GRILLED ONION BOMBS, or any other recipe on my site, let me know in the comment section how it turned out, we love hearing from our readers! You can also follow along with me on PINTEREST, FACEBOOK, and INSTAGRAM to see more amazing recipes and whatever else we’ve got going on! 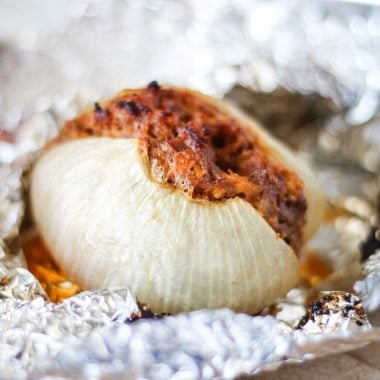 *Grilling times will vary based on how high you have your grill set.