Canned green beans often get a bad rap as bland or boring. Keep them stocked in you pantry, and you can easily doctor them up to turn them into a 5 star side dish like these garlic Parmesan canned green beans. 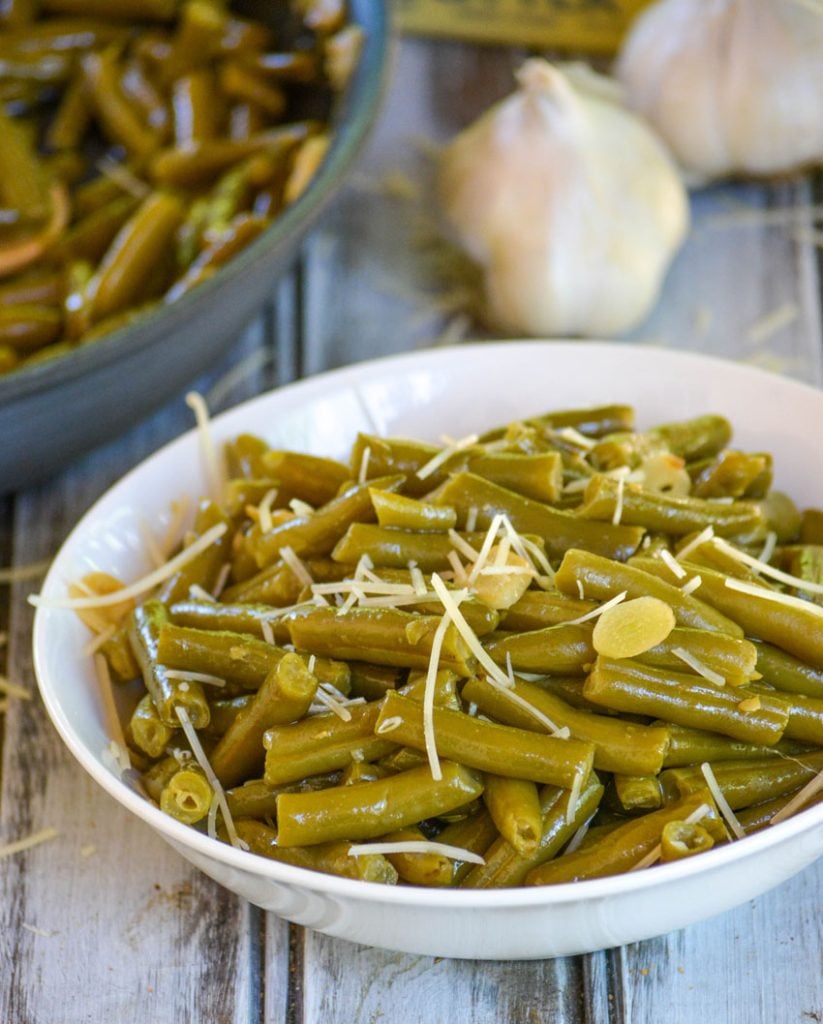 Green beans are a staple in my house all year long. We love them in all forms. Fresh from the garden, or canned & store bought- our household does not discriminate.

We can all agree that they taste great, even from the can, with minimal froof-ing required- but you can do so much with them.

It’s often easy for me to come up with an easy casserole to throw together or some other main course on busy nights. Coming up with a simple vegetable side the kids can all agree on? That’s never an easy task- except when green beans are involved.

Again, they’re the one thing they can agree on, and always do. Obviously I keep plenty on hand and stocked in my pantry. 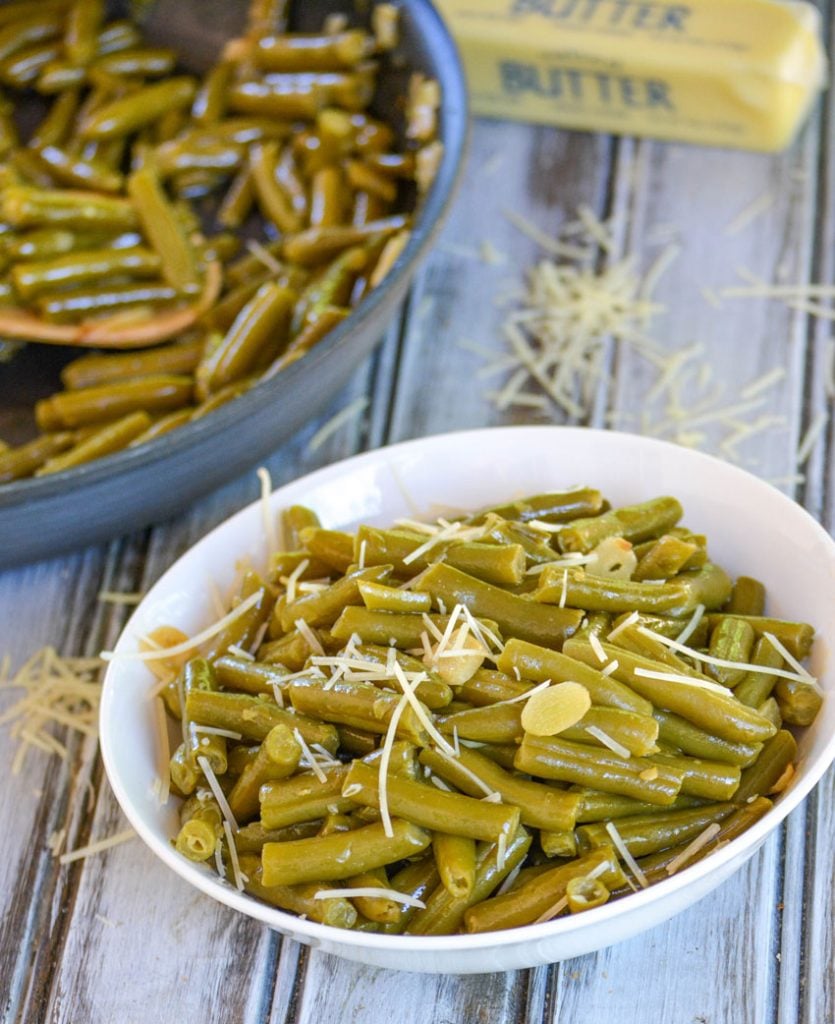 They’re great for the everyday, but I adore them even more because they’re also perfect for fancier occasions. Special meals, big family gatherings, and even the holidays. Green beans are a mainstay at them all.

While we have plenty of recipes for preparing and serving fresh green beans, I tend to go for the canned variety when the holidays roll around.

I’ve never heard a single complaint about my beans, and frankly they’re much easier for me to prepare. It allows me to focus my attention on the more in depth courses of the meal. 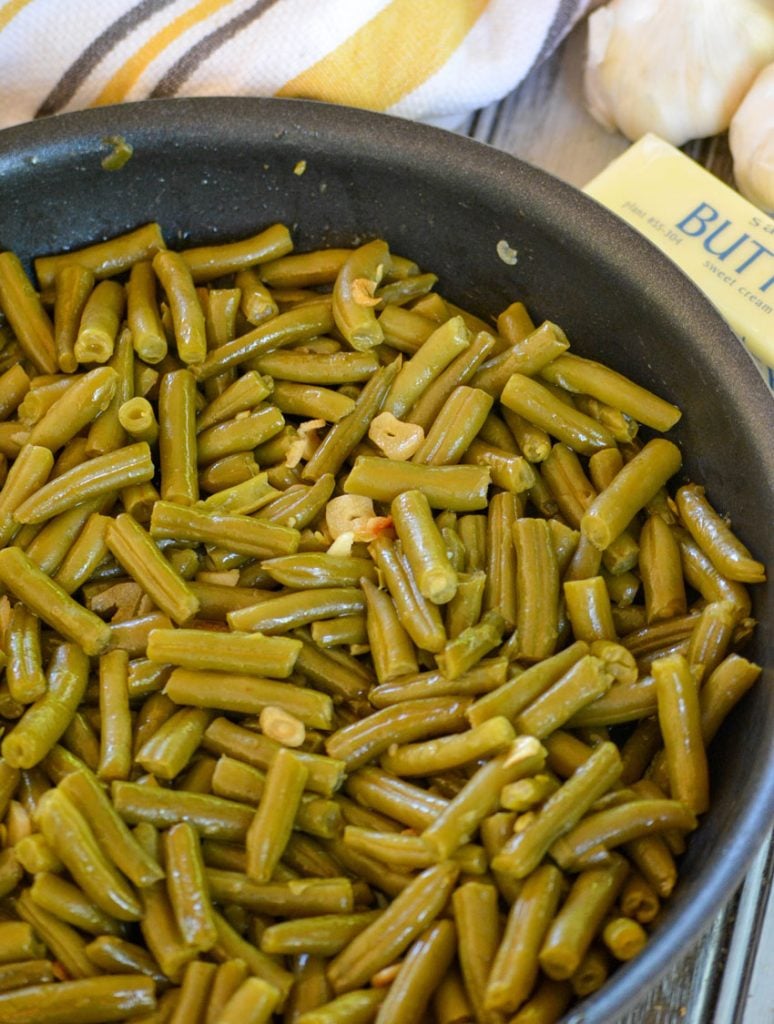 My tried & true recipe has always been my Grandma’s canned green bean recipe. This year though, I decided to try my own hand at flavoring the canned beans.

While they’re not the same- these garlic Parmesan canned green beans are equally delicious. No beans left behind when these are served!

Transforming a can of beans into an incredible side dish isn’t hard, and it just takes a few simple extra ingredients.

That’s it, obviously in addition to the canned green beans themselves. See? Super simple- and you’re on your way to a rock star side dish everyone’s gonna love.

Your family’s going to be blown away after one bite, especially when it becomes known that this spectacular side is basically fancy green beans from a can that don’t taste like they’re from a can.

Once you’ve got your ingredients assembled, it’s just as easy to throw everything together. No complicated steps, and no long cook times here. 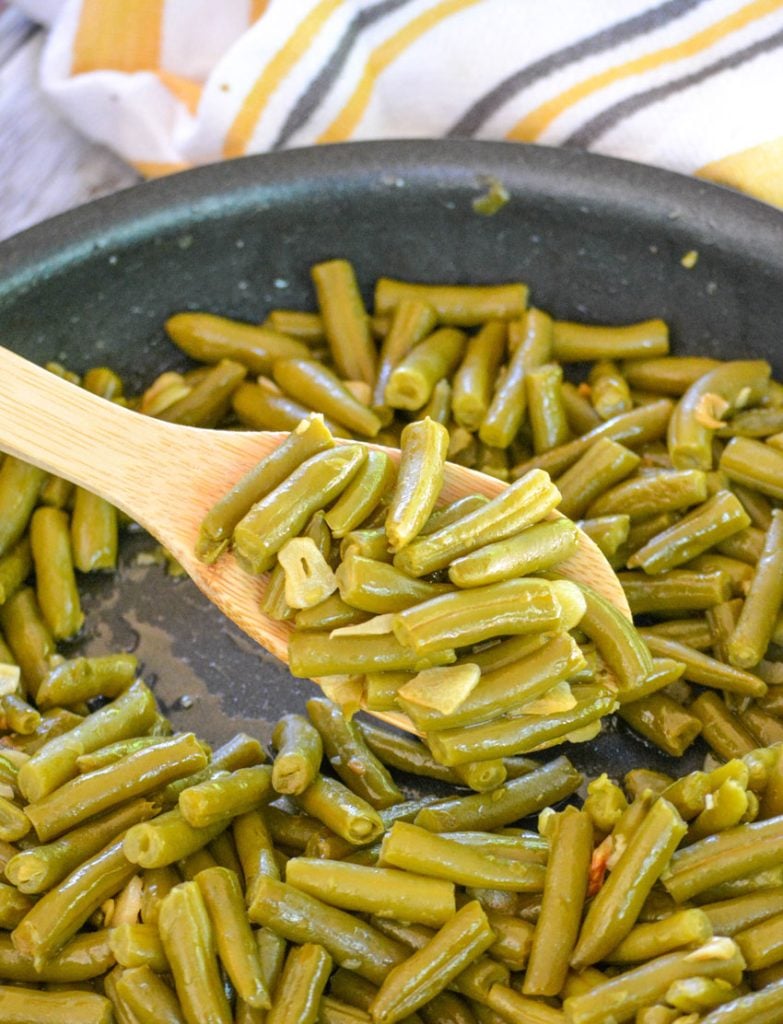 To make the garlic green beans, melt a tablespoon of butter in a large skillet. Stir in two teaspoons of extra virgin olive oil.

Be careful not to have the heat to high. I’d suggest medium low. Olive oil has a low smoke point, and butter burns easily- both of which you want to avoid.

Once the oil & butter mixture’s hot (as soon as the butter’s melted and the mixture has a sheen to it), stir in the thinly sliced garlic. Let it saute just until lightly browned and fragrant- this will only take about 60 seconds.

Working quickly so the garlic doesn’t burn and turn bitter, stir the drained cans of green beans into the skillet. Use a spatula to toss them a couple of times as they cook.

The beans won’t burn, or turn to mush but they will be delicious infused with the flavors of both the fragrant garlic and the savory butter.

Cook the beans for roughly 6-8 minutes, tossing them regularly to ensure the flavor’s dispersed throughout as well as even cooking.

Remove the skillet from heat, and using a slotted spoon ladle the green beans onto waiting plates. Serve them with a sprinkle of shredded Parmesan on top. 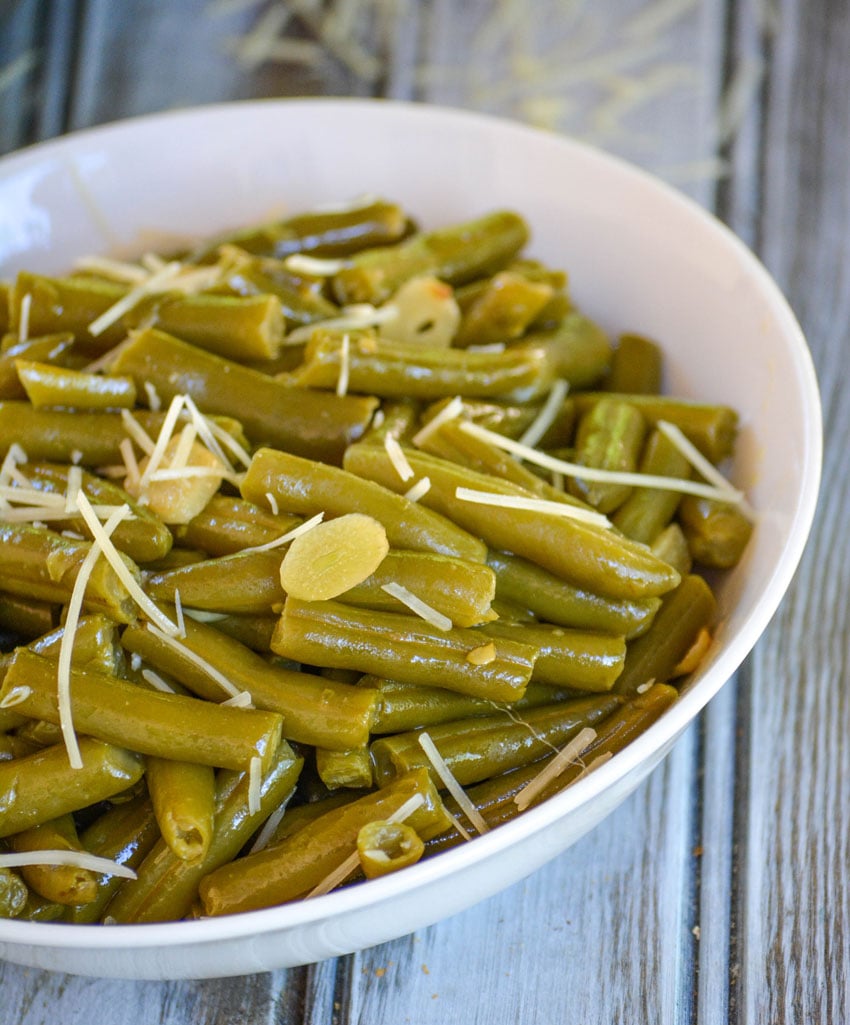 Canned green beans are easy to make your own. Take your own liberties with this garlic Parmesan green bean recipe & adapt it to your own unique preferences.

Other Delicious Ways To Change Up Your Green Bean Game:

If you’ve tried these GARLIC PARMESAN CANNED GREEN BEANS, or any other recipe on the site, let me know in the comment section how it turned out, we love hearing from our readers! You can also follow along with me on PINTEREST, FACEBOOK, and INSTAGRAM to see more amazing recipes and whatever else we’ve got going on! 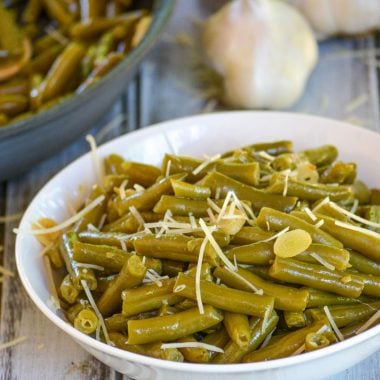 Canned green beans are great for easy dinners, but they can be so much better. Infused with garlic & topped with shredded Parmesan- this simple short cut side dish is perfect for busy nights but tasty enough for fancier meals too!
4.28 from 58 votes
Print Pin Rate
Course: Side, Side Dish
Cuisine: American
Prep Time: 10 minutes
Cook Time: 10 minutes
Total Time: 20 minutes
Servings: 6
Calories: 53kcal
Author: Meaghan @ 4 Sons R Us
Prevent your screen from going dark