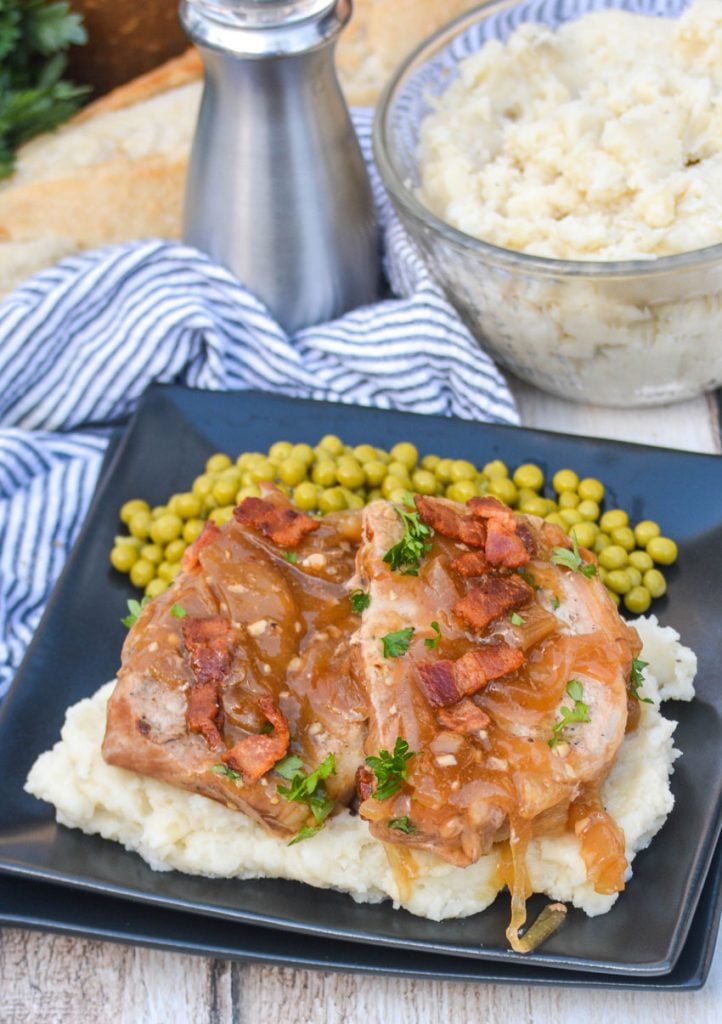 As the household ‘chef’, or primary cooker of main meals, you’d usually think you have a general idea of everyone’s palates and tastes and going on that info alone.

You’d think you’d have a pretty good idea of what recipes will be a hit or a miss.

But even with all that information handy, most pork chop recipes have always been more of a miss than a hit for me in the dinner dept.

There’s never been anything particular to lay the finger on, just more of nothing being a show-stopper. 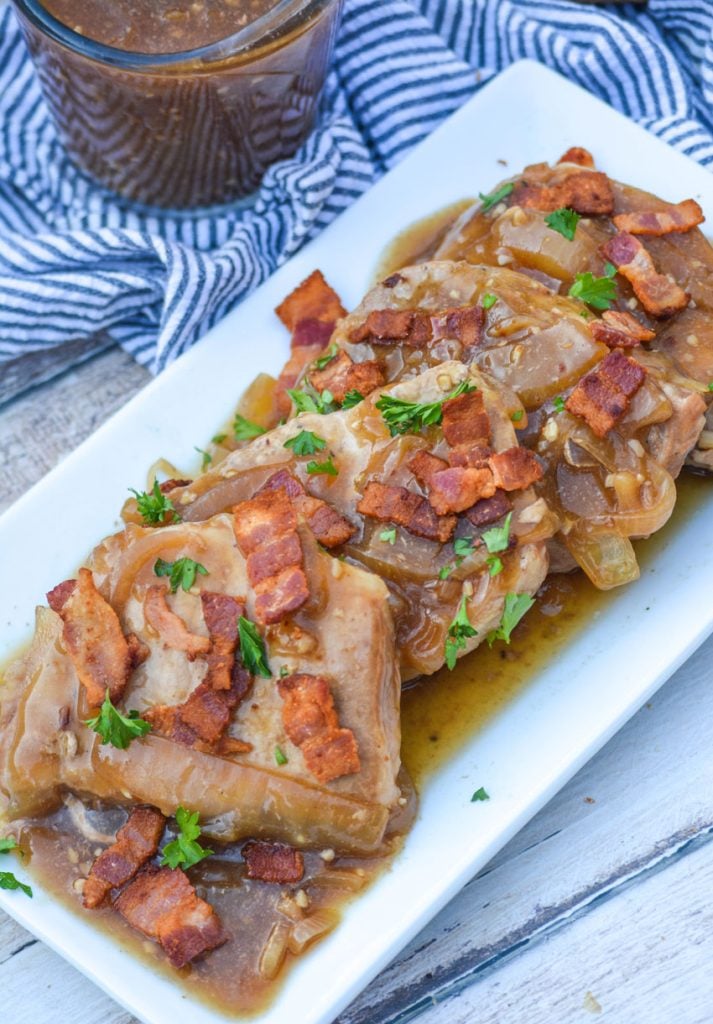 So far the guys have only gone ga-ga for them a few ways, breaded, fried, and topped with caramelized onions, herbed and soaking in mushroom gravy, or my crispy, baked Italian ranch chops.

I am so glad now though that I hadn’t given up completely on finding a successful recipe, especially with my husband!

After all, the hubs is my pickiest eater.

Finally with these crockpot smothered pork chops, we have a winner! 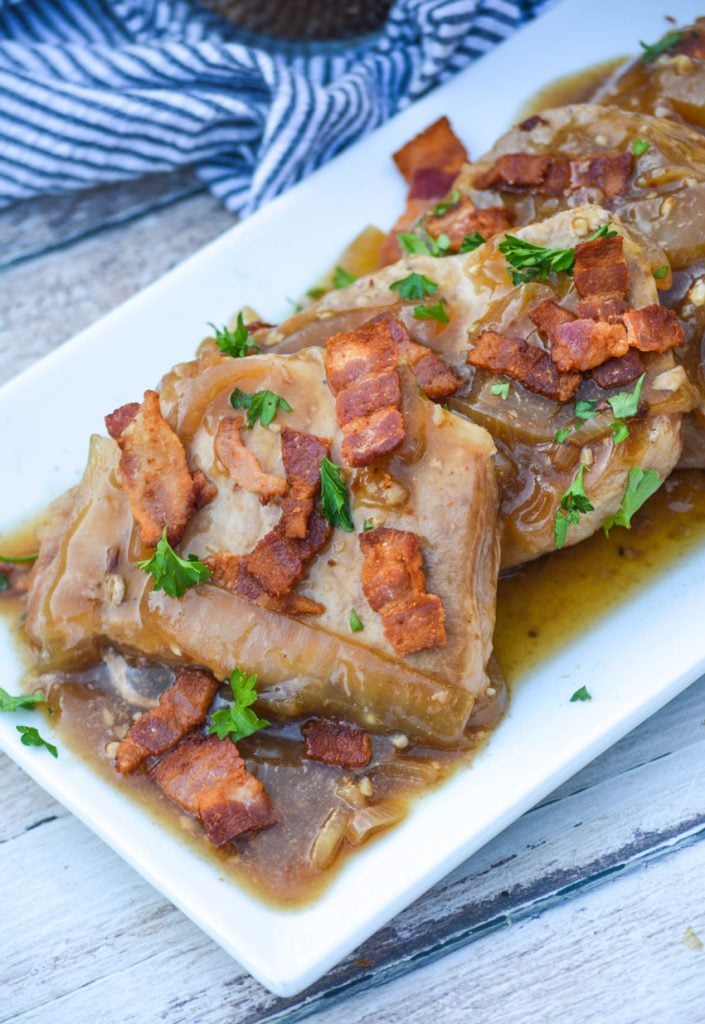 Why Call Them Smothered?

While smothered may not typically be something I’d enjoy hearing, when it comes to these pork chops, it is essential.

‘Smothering’ is actually a whole style of cooking in the South.

It involves creating a savory gravy, one that usually begins by rendering (cooking down) bacon.

Vegetables are added and cooked in the fat, along with various seasonings and flavorings.

The sauce is then thickened into a gravy like consistency which bathes your seared meat of choice.

The meat will finish cooking in the sauce so that it really absorbs the flavor on every level.

It’s one of my favorite ways to take simple cuts of meat like chicken breasts or pork chops to the next level. 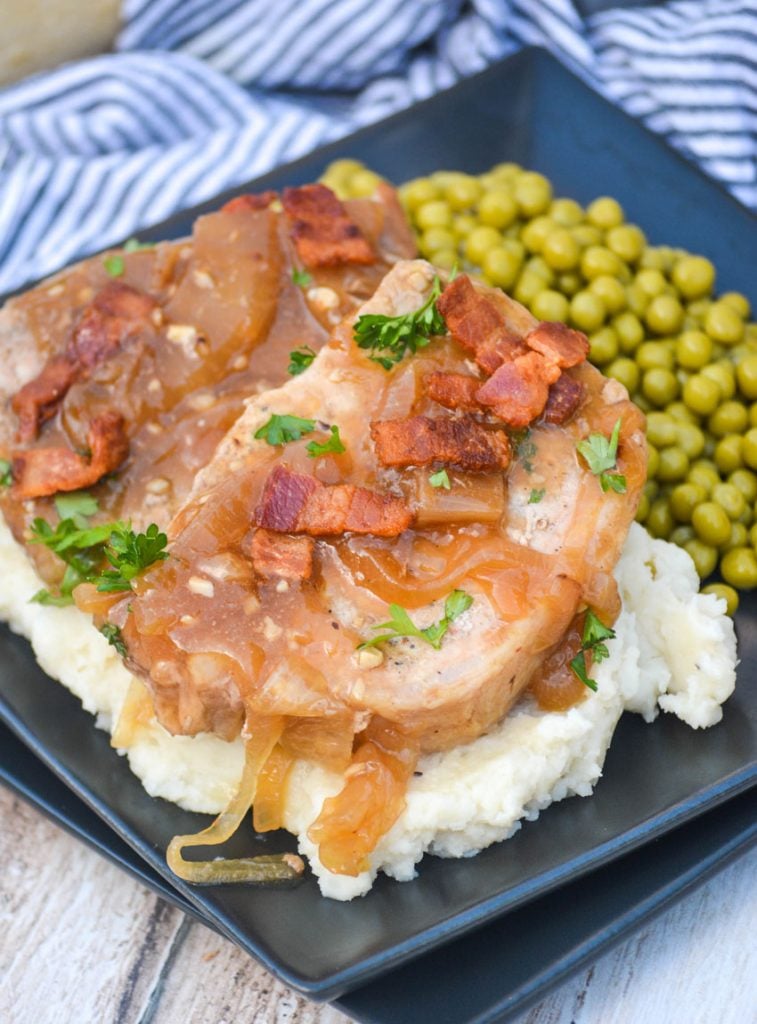 Slow Cooking Is The Trick For Pork Chops

Usually Southern smothered dishes are made in cast iron skillets, or Dutch ovens.

My Grandma would swear by that method, I assure you.

Pork chops though are a fickle thing to cook with.

They’re such a lean cut of meat it can be tricky to cook them in a way that leaves them juicy & tender, instead of overly dry.

Nobody wants a sad, dry pork chop for supper. Especially not when this savory gravy is on the line.

Pork chops cook so quickly, whether on the grill, stove top, even in the oven- before you know it they’ve become tough, chewy, and no longer appealing.

Thankfully, that’s where slow cooking in the crockpot comes into play.

This low and slow method lets them absorb all the delicious flavors of the gravy, without drying out or over-cooking.

All with minimal work or involvement on your part! 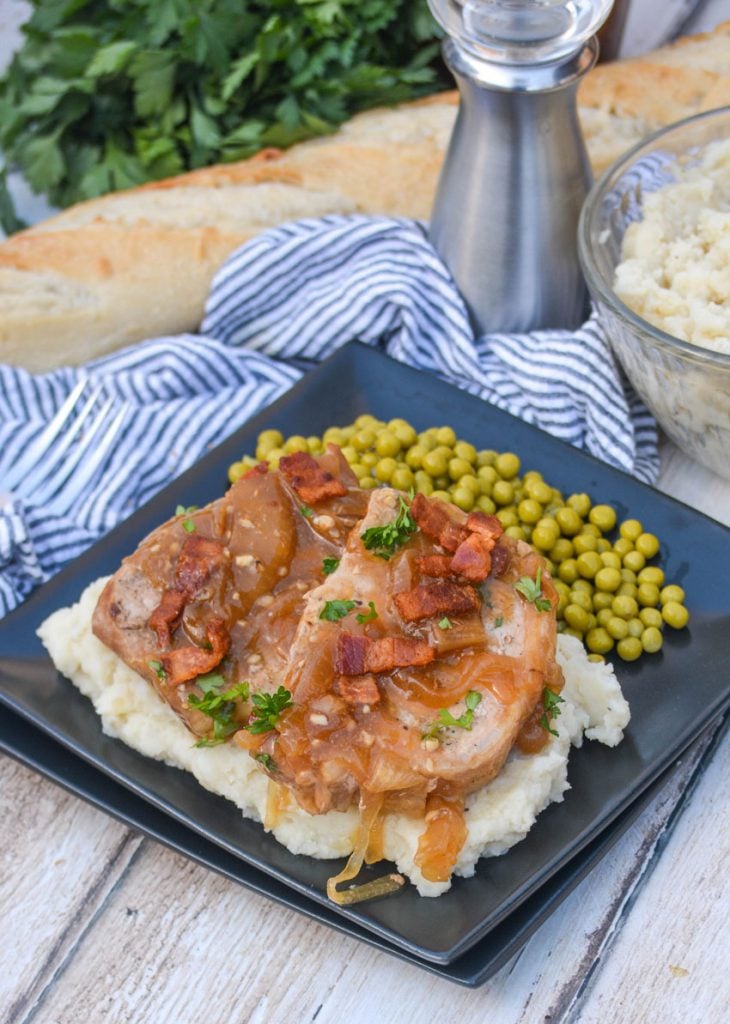 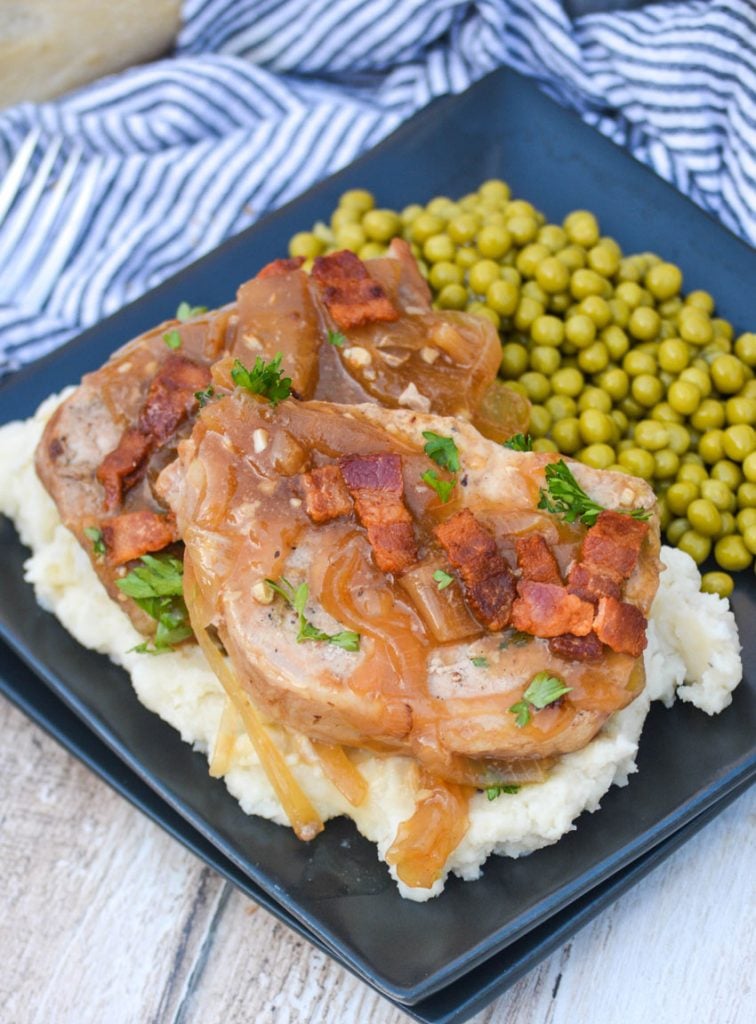 As mentioned above, any good ‘smothered’ recipe worth it’s salt begins with bacon.

Start this crockpot smothered pork chops recipe off by cooking the bacon in a large skillet over medium/medium high heat. Turning it as needed, until the bacon’s cooked crisp.

Remove the bacon to a paper towel lined plate to let the excess grease drain away.

Discard all but roughly two tablespoons of the bacon grease, leaving that in the pan.

Cook the seasoned onions over medium heat, stirring often, until they’ve begun to caramelize. This can take anywhere from 10-15 minutes.

Pour 1 cup of chicken broth into the skillet, and use a sturdy wooden spoon to scrape the bottom of the pan.

Make sure to dislodge and stuck on browned bits- these are flavor gold, don’t skip this step!

Carefully pour this onion sauce mixture into the waiting bowl of your crockpot, using a spatula to scrape it all away and into the pot.

Season all of the chops liberally with salt & pepper, and then add them to the bowl of the crockpot.

Use the spatula to gently press them down into the juices.

Cover and cook on low for 6-7 hours. Alternatively, you can cook them on high for 4-5 hours.

When there’s only an hour left of cooking time, gently stir in the cornstarch slurry.

That’s an equal mixture of two tablespoons cornstarch & water, stirred together until smooth.

Using a pair of tongs, carefully remove the pork chops to a waiting plate, and cover them tightly with foil.

Remove the bay leaves from the liquid in the crockpot.

At this point you have options. You can proceed with everything left in the bowl of the crockpot, and mixing it from there.

Or you can take an extra step to remove excess, unwanted fat from the gravy.

I’ve done both, and I prefer taking the extra step.

To do this, carefully transfer the gravy liquid to a large waiting bowl. Use potholder to handle your hot crock and pour, or ladle the mixture instead.

Let the mixture rest for 5-10 minutes, and use a spoon to remove any obvious fat or grease hanging out on top.

Whisk in the apple cider vinegar, and season the gravy with salt & pepper- to taste.

Serve the pork chops with a generous ladle of onion gravy served over top.

If you’re unsure about cooking with pork chops, or have been burned by pork chop recipes before- this is a perfect starting-over/beginning point. 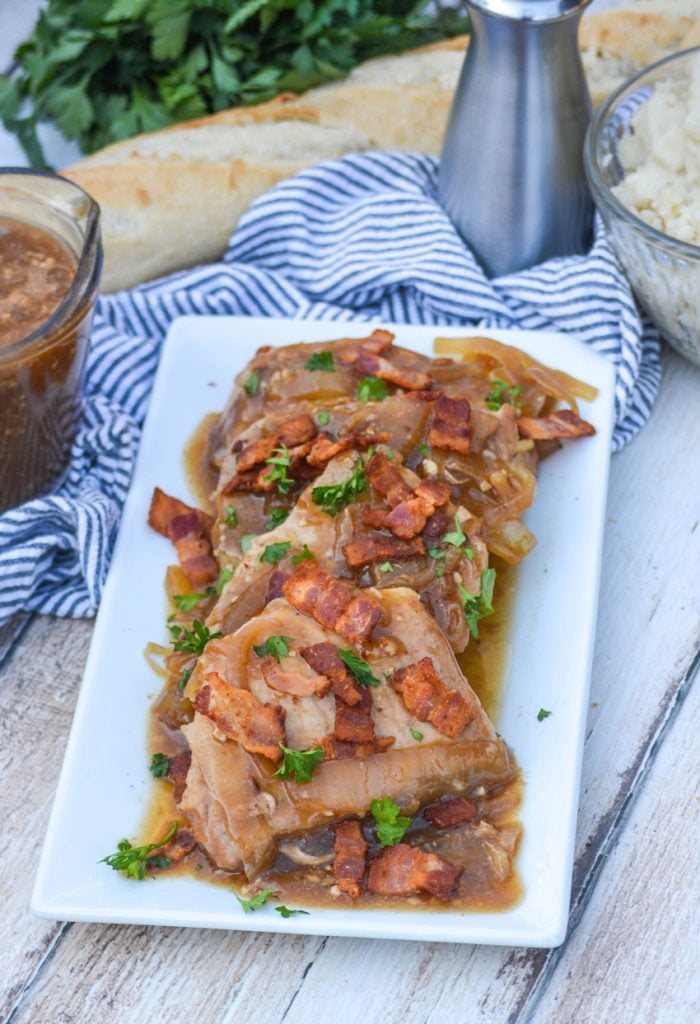 Tips & Tricks For This Recipe

Slow cooked, all day long, in their rich, onion-based gravy they’re fall-apart tender and every bite is dee-vine. Topped with a generous bit of crisp, crumbled bacon and parsley? Ohhhhh, yes.

We serve our crockpot smothered pork chops over a bed of fluffy mashed potatoes so we can truly appreciate every single bit of gravy, even after the chops are gone.

And don’t forget the hunk of crusty bread on the side, you know, to sop up any possible remaining juices.

This meal’s good to the last drop!

If you’ve tried this CROCKPOT SMOTHERED PORK CHOPS, or any other recipe on the site, let me know in the comment section how it turned out, we love hearing from our readers! You can also follow along with me on PINTEREST, FACEBOOK, and INSTAGRAM to see more amazing recipes and whatever else we’ve got going on! 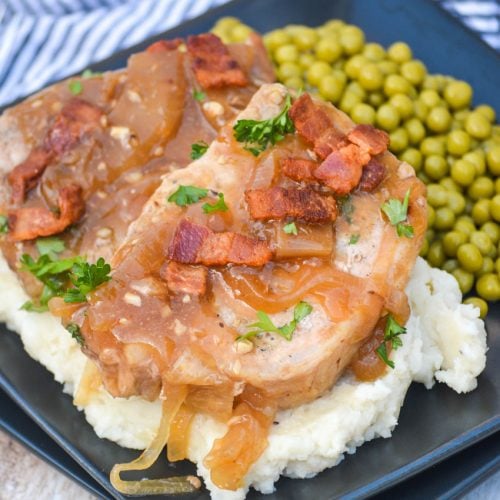