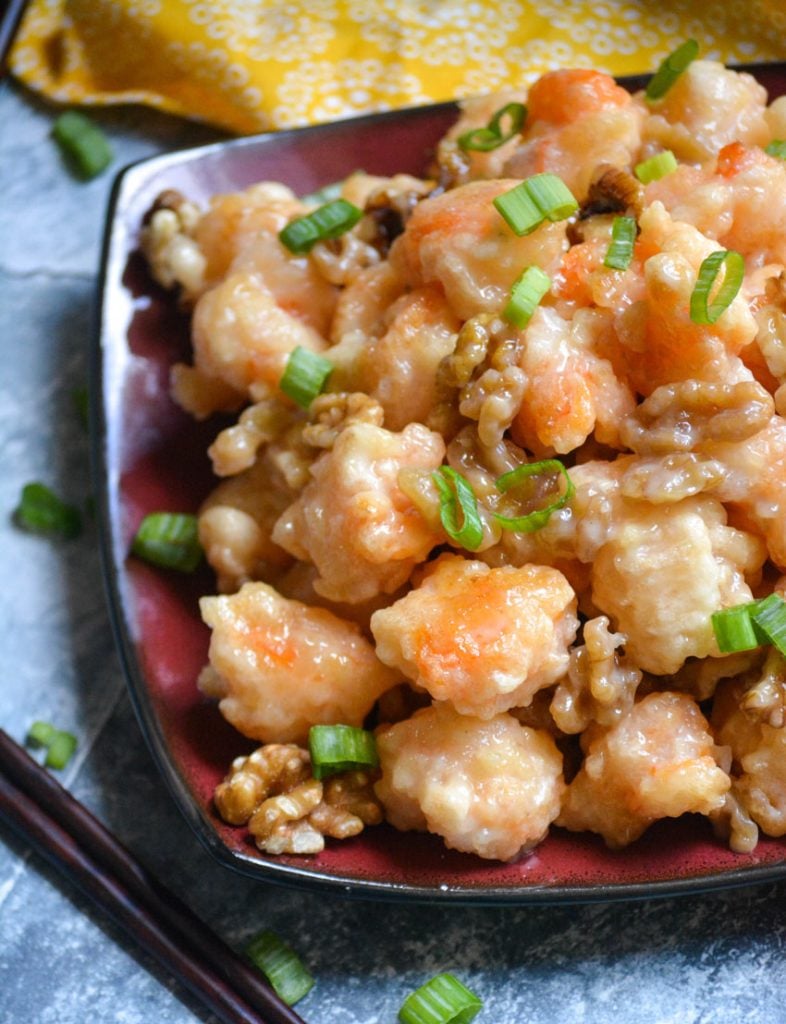 We tend to eat variations of the same meals often around here.

We’re homebodies, as well as creatures of habit.

Every now and then though, we get the urge for something different.

Generally something we’d never cook ourselves at home.

That’s typically when we got for something with Asian flavor, and we have some real favorites. 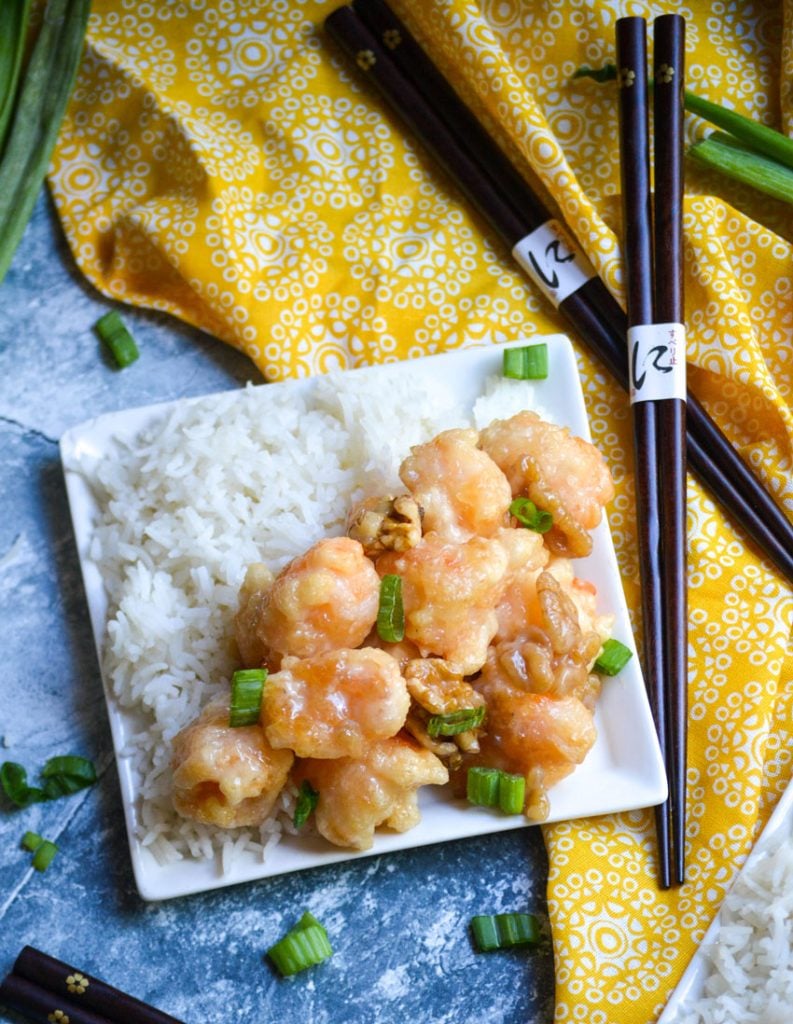 The one that my husband calls ‘the one that almost made you pick up your plate and lick it clean in the middle of that super nice Asian restaurant’.

No shame, none at all.

Well, maybe just enough for me to regain my composure with my plate hovering in the air, mid-way to my mouth.

One taste of this irresistible shrimp recipe and you will totally understand the urge.

If it illicit-ed that kind of reaction in public it was a no-brainer that I would try, try, and try again to not only recreate something similar at home, but keep right on trying until I got it just right.

This honey shrimp recipe chief among them! 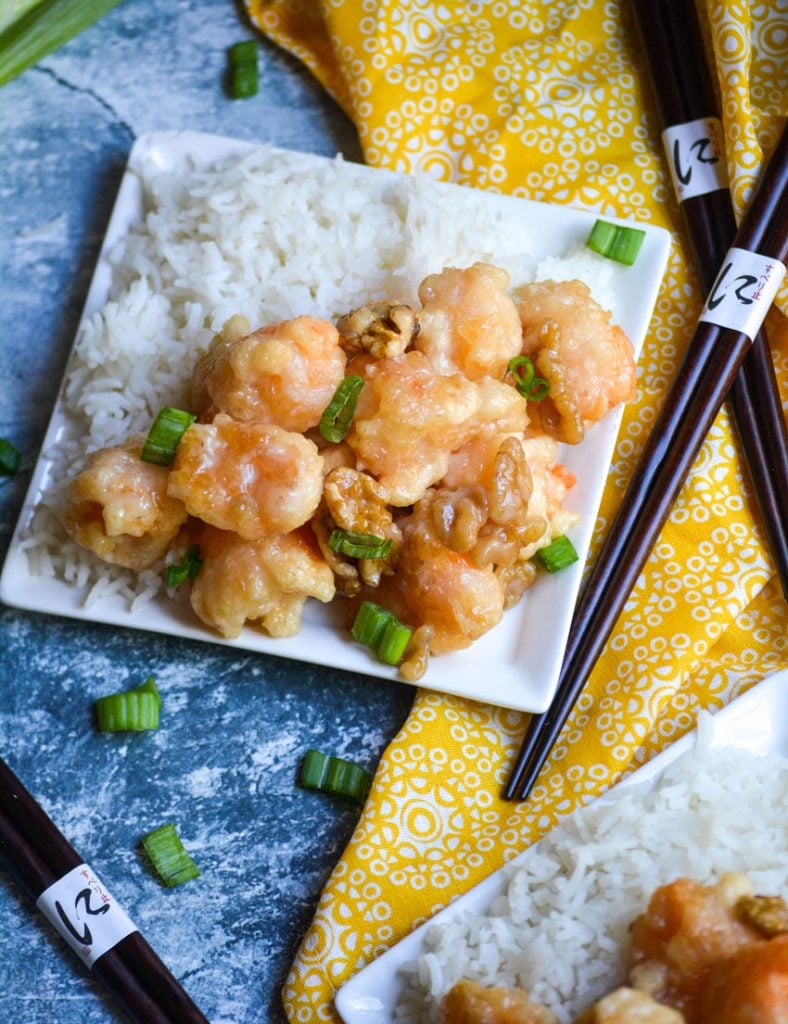 For all of the fanciness implied in the title, it’s easy enough to recreate in any home kitchen.

It also has a fairly easy to read ingredient list.

See what I mean? 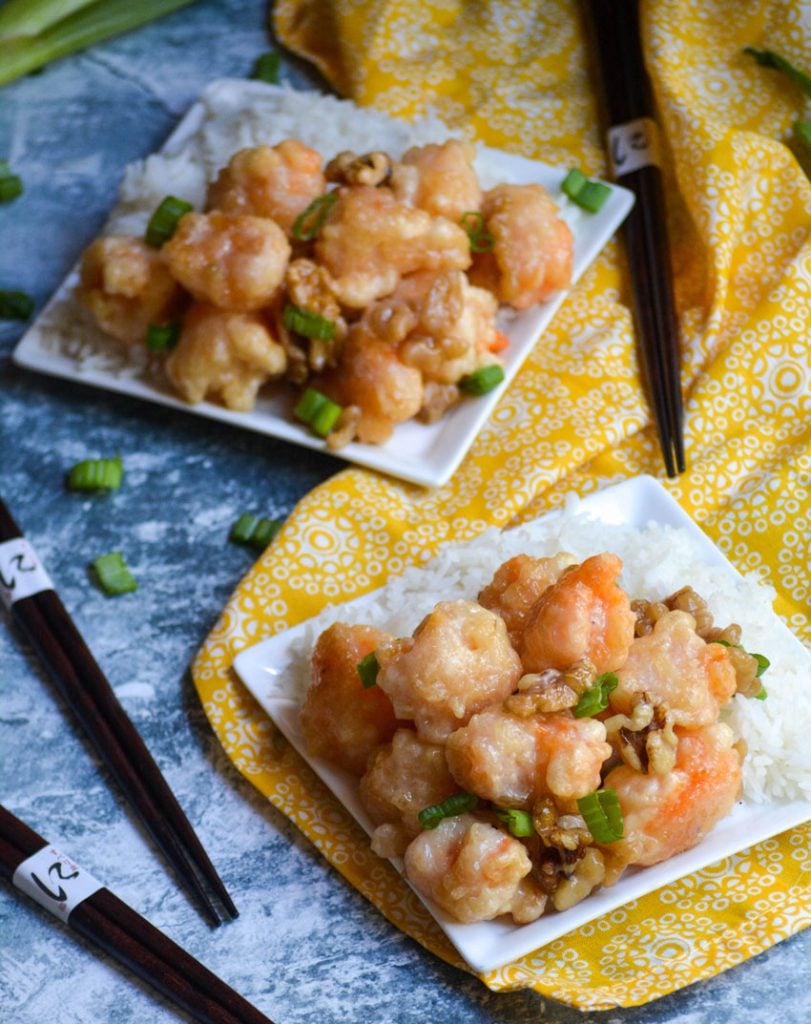 How To Make This Take Out Recipe At Home

This crispy shrimp and nut recipe is mixed together and served as one when ready to eat, but it’s actually made in three different stages.

First, candying the nuts, then pan frying the shrimp, and finally tossing everything together.

To avoid confusion, we will break it down step by step and divide it into the two larger parts.

Line a rimmed baking sheet with parchment paper, and set aside.

Add 1/2 cup of water to a medium sized skillet, and heat it over medium high heat until it comes to a boil.

Whisk in the sugar, stirring constantly, until the sugar’s dissolved and the syrup has begun to thicken.

It may also appear slightly golden brown in color, this is OK.

Working quickly, add the walnuts to the skillet and gently toss them with the syrup to evenly coat.

Transfer the candied walnuts to the prepared baking sheet. Spread them out into a single layer.

Set the sheet pan aside, and allow the nuts to cool while the candy coating hardens. 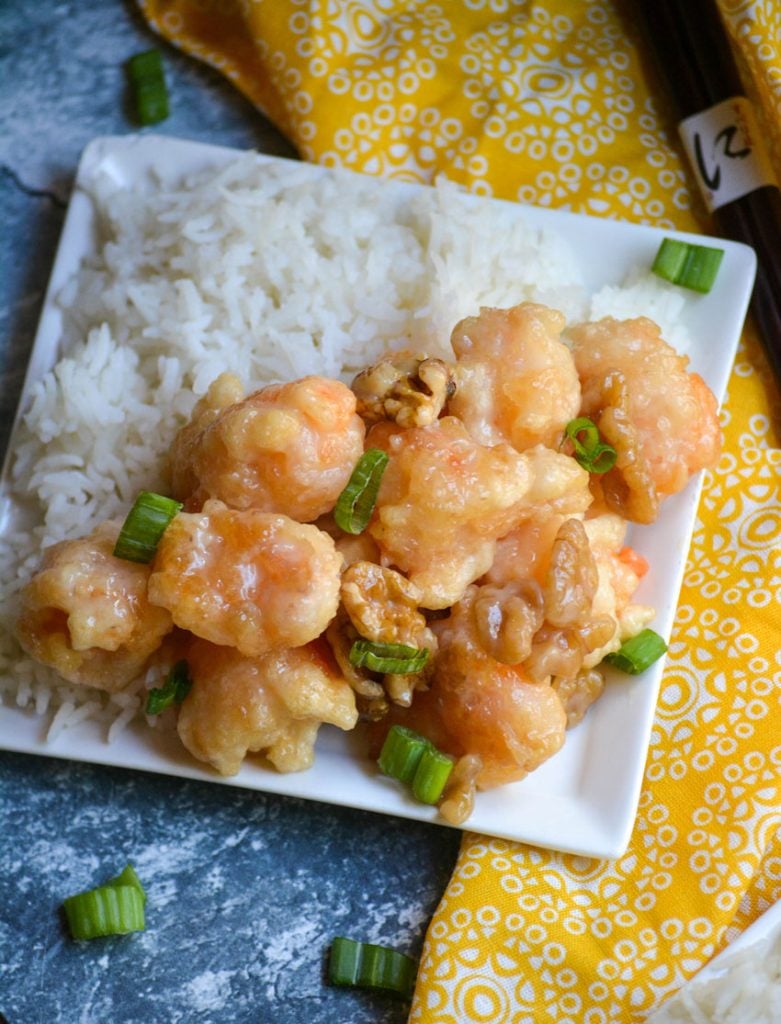 To a large skillet set over medium high heat, add the oil.

While the oil’s heating, batter the shrimp.

Dip the shrimp in the beaten egg, and then dredge them in the cornstarch, pressing if needed to ensure an even coating.

I like doing this in batches, working with 4-5 shrimp at a time.

This will help reduce overcrowding, and make sure every piece gets the appropriate treatment for maximum coverage.

Once hot, it will appear to have a shimmery sheen when ready.

Add the coated shrimp the the pan with hot oil, but do not add more than 8-10 shrimp at a time.

You don’t want to overcrowd the pan, and the smaller number will help you keep a better eye on them.

Once that oil heats up, cooking can go really quickly, so the less crowded oil will help ensure nothing burns and instead only cooks to a beautiful golden brown.

Cook the shrimp for 1-2 minutes on each side. Again, these will cook quickly!

Using a slotted spoon, remove the fried shrimp to a layer of waiting paper towels. Allow them to drain of all excess grease.

Repeat until all the shrimp’s done.

Add the mayo, honey, and condensed milk to a large mixing bowl.

Whisk together until evenly combined.

Transfer all the fried shrimp to the mixing bowl, and toss until evenly coated in the sauce.

Serve the crispy honey shrimp topped with the candied walnuts.

If you’d prefer, you can stir the nuts right on in with the shrimp in the sauce.

You can’t go wrong either way! 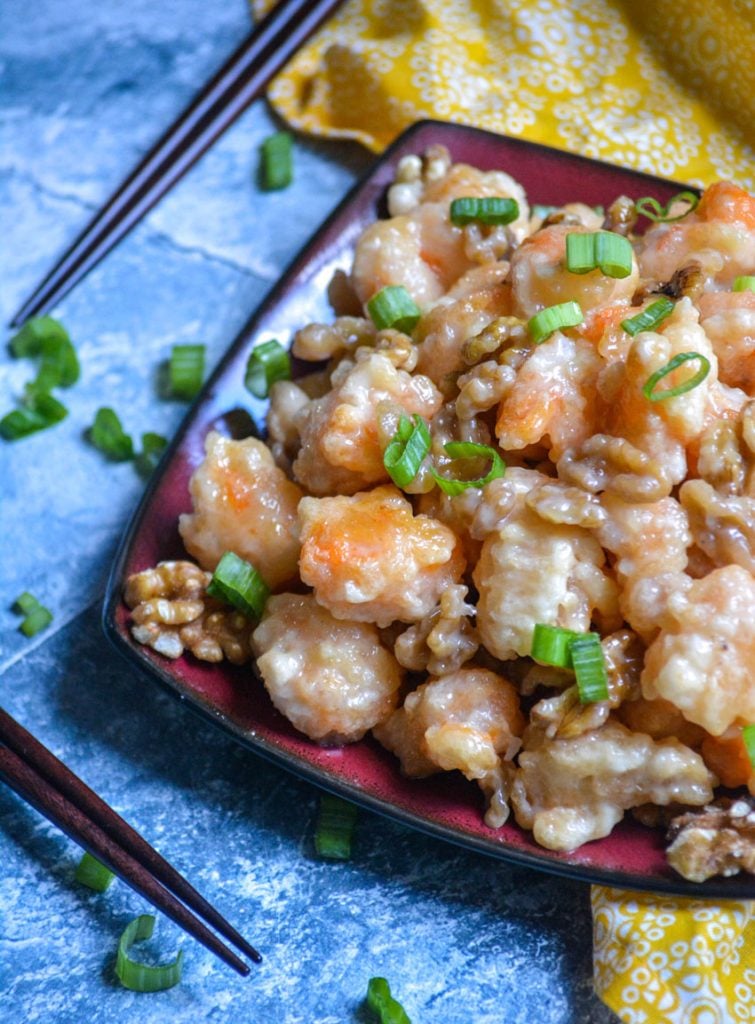 This honey walnut shrimp is so good, it’s easy to eat right out of the bowl.

Not gonna lie, sometimes we’ve plopped the bowl right down on the table and all picked out of it with pairs of chopsticks.

Other ways to serve it include:

However you choose to serve them, you really can’t go wrong. They’re that yummy!

Have your own favorite way to enjoy them? Let us know in the comments below!

I love shrimp, and there’s really no right or wrong way to prepare it in my book.

But if there’s a top notch, if I have a choice I’d really love for you to make it this particular way, version … This is crispy honey walnut shrimp is definitely it.

Other Shrimp Recipes To Try

Crisp, fried shrimp are combined with sugared nuts and tossed in a creamy, sweet sauce.

Serve it as is or serve it over a bed of freshly steamed white rice for an authentic, restaurant quality meal.

Looking for other ways to enjoy shrimp at home?

Check out these recipe ideas:

If you’ve tried these CRISPY HONEY SHRIMP WITH CANDIED WALNUTS or any other recipe on my site, let me know in the comment section how it turned out, we love hearing from our readers! You can also follow along with me on PINTEREST, FACEBOOK, and INSTAGRAM to see more amazing recipes and whatever else we’ve got going on! 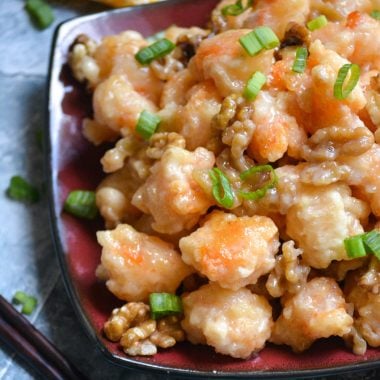