Cinnamon Toast Crunch pancakes are the breakfast you need to have on your table this and every weekend. A classic buttermilk pancake recipe gets a major upgrade with everyone’s favorite cereal. It’s a sweet spin on breakfast that will have everyone at your table begging for more. 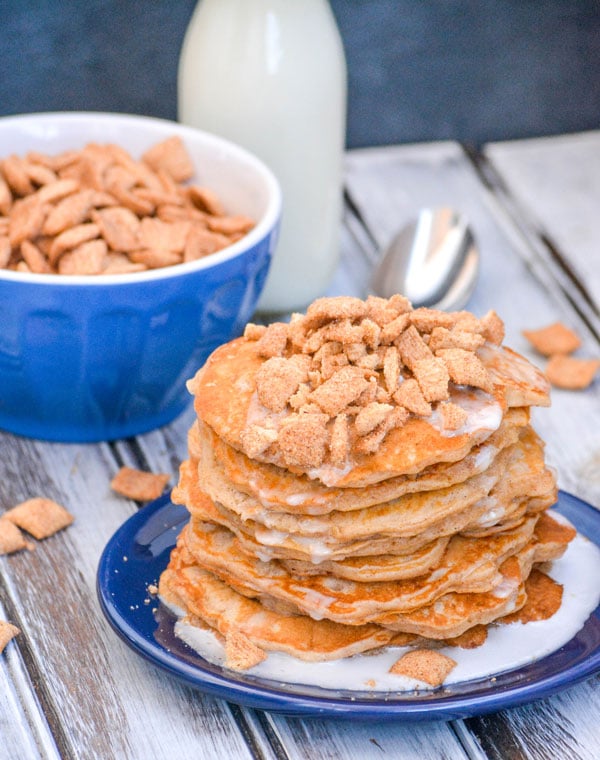 One of my family’s favorite cereals is hands down Cinnamon Toast Crunch.

What’s not to love about little crunchy squares of love coated in cinnamon sugar goodness?

We eat it regularly for breakfast and sometimes as a treat.

It doesn’t get much better.

That is- unless you add it to fluffy buttermilk pancakes for a breakfast and brunch sent straight from heaven.

This recipe is no more difficult than making any other kind of pancakes or waffles but tastes so decadent that you could easily serve it up for Christmas morning breakfast. 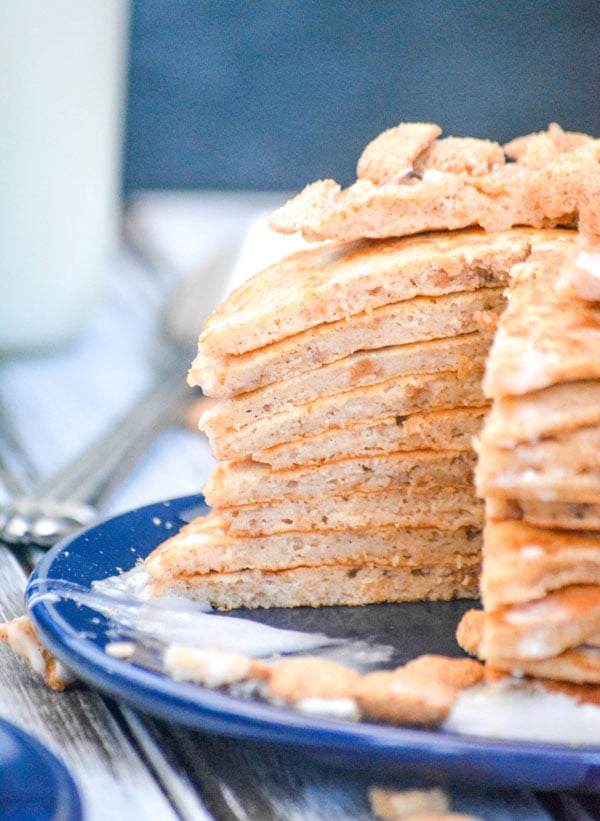 For this recipe you need: 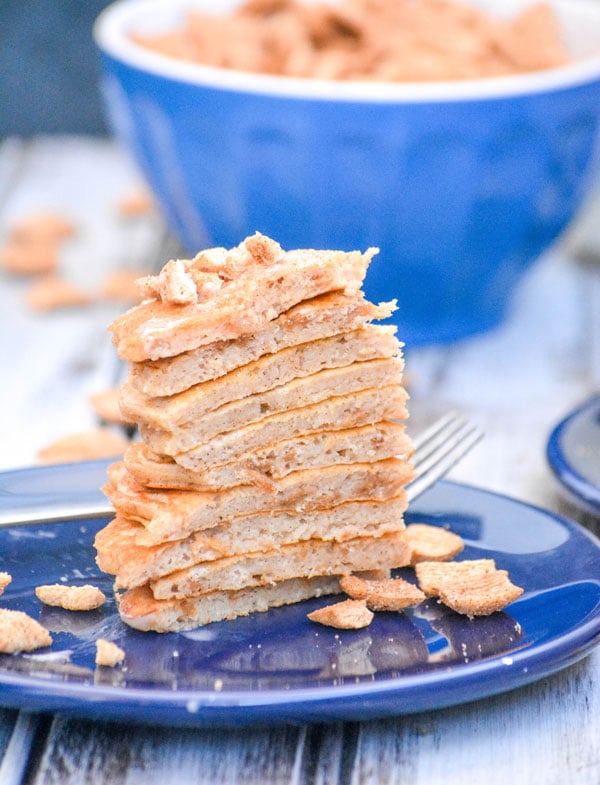 Making these is very similar to making other pancake recipes.

You just fold in crushed Cinnamon Toast Crunch cereal in place of some of the flour.

To make it, start by whisking the flour sugar, baking powder, cinnamon and salt together in a mixing bowl until everything is evenly combined.

Then whisk the crushed cereal into the mix and set the bowl aside.

Once you’ve got the dry ingredients whisked together, add the buttermilk, melted butter, egg and vanilla to a separate large mixing bowl and whisk them together until they are combined.

Heat a skillet over medium high heat. When the skillet is nice and hot, add 1/4 cup of pancake batter to it.

Cook the pancake for about 2 minutes or until small bubbles form in the pancake. Then flip it and cook the other side for an additional 1-2 minutes.

When the pancake is puffed up and golden brown, remove it from the skillet and set it on a waiting plate.

Repeat with the remaining batter.

Once you’ve made the pancakes, make the powdered sugar glaze.

To do this, just whisk the powdered sugar, milk and vanilla extract together to form a glaze and serve with the pancakes, pouring it over individual stacks of pancakes when you serve them the way you would with syrup. 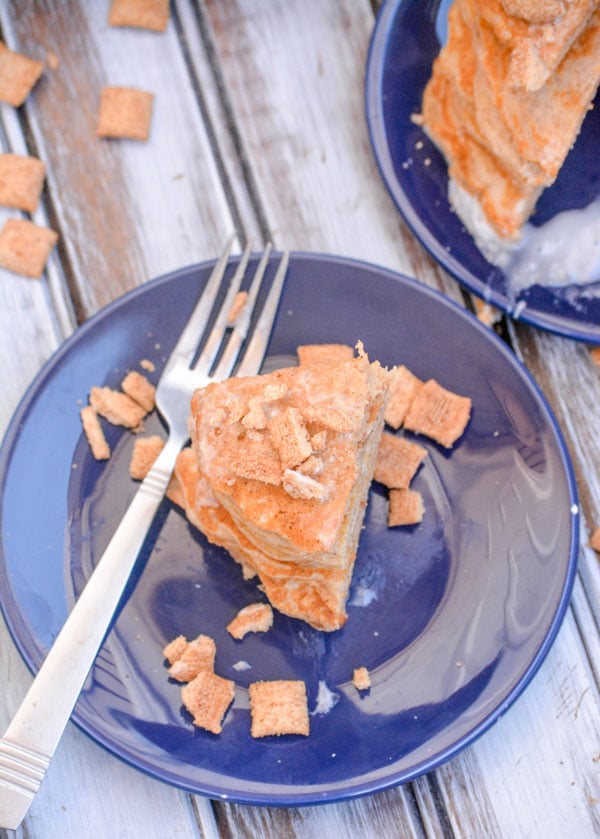 Store any leftover pancakes in an airtight container in the fridge for up to 3 days.

You can also freeze leftovers by wrapping them tightly in plastic or foil and popping them in a freezer safe bag for up to 3 months.

Reheat leftover pancakes by popping them in the toaster oven. 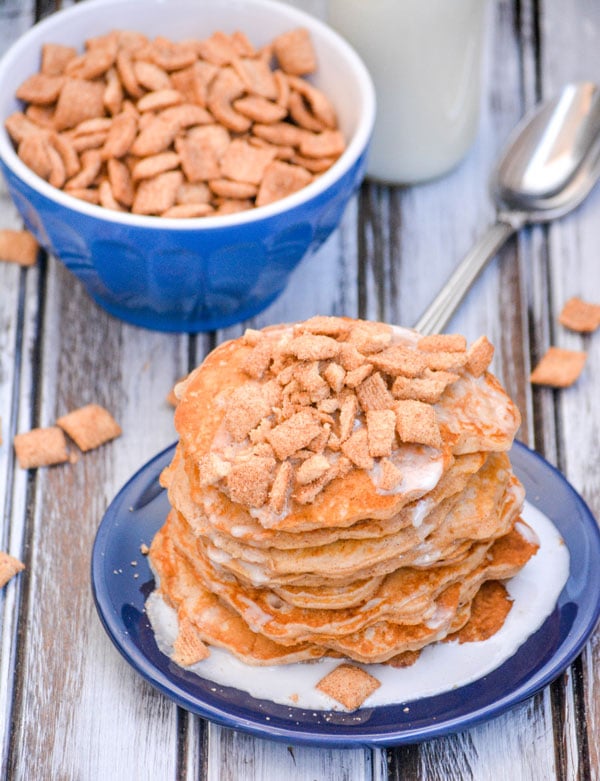 These Cinnamon Toast Crunch pancakes are the brunch you need to make for your family this weekend!

Watch everyone be blown away with how yummy the cereal makes these.

Looking for other breakfast ‘stuffed’ pancakes? Try these:

If you’ve tried this CINNAMON TOAST PANCAKE RECIPE, or any other recipe on the site, let me know in the comment section how it turned out, we love hearing from our readers! You can also follow along with me on PINTEREST, FACEBOOK, and INSTAGRAM to see more amazing recipes and whatever else we’ve got going on! 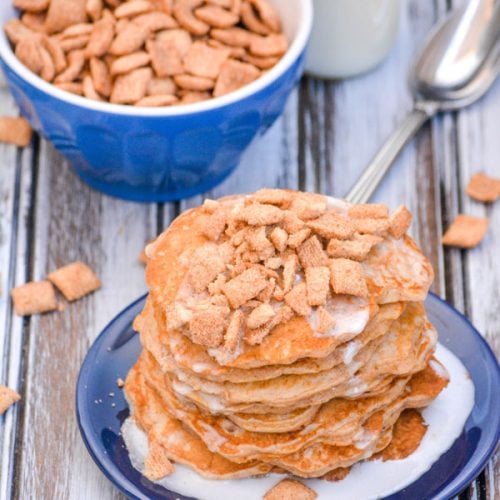 Cinnamon Toast Crunch pancakes are the breakfast you need to have on your table this and every weekend. A classic buttermilk pancake recipe gets a major upgrade with everyone's favorite cereal. It's a sweet spin on breakfast that will have everyone at your table begging for more.
5 from 5 votes
Print Pin Rate
Course: Breakfast, Brunch
Cuisine: American
Prep Time: 10 minutes
Cook Time: 10 minutes
Total Time: 20 minutes
Servings: 4
Calories: 318kcal
Author: Meaghan @ 4 Sons R Us

To Make The Glaze

If your glaze hardens before you're ready to serve, simply add in a tiny bit more milk and whisk again to recombine. Pancakes can be topped with extra crushed/crumbled cereal, if desired. Want an even sweeter finish? Substitute maple syrup for the vanilla extract in the glaze and add a sprinkle of cinnamon too.

recipe adapted from We Are Not Martha