Blood and guts cinnamon rolls are the frighteningly good way to start Halloween! The slice and bake sweet roll gets a spooky makeover thanks to a little food coloring and jam. 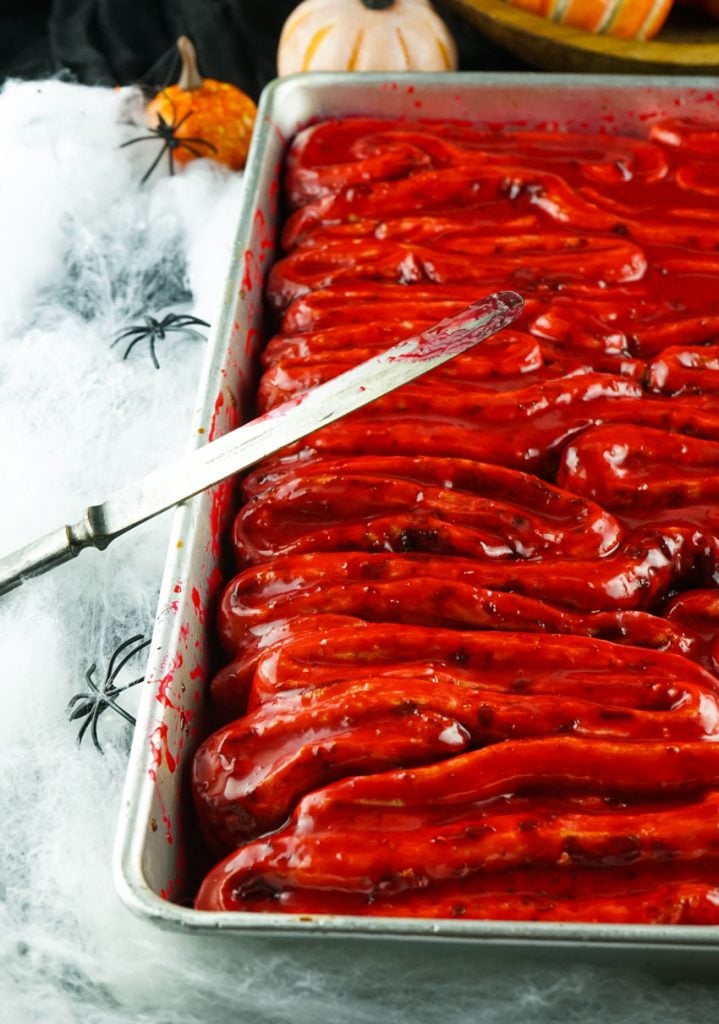 This post and recipe was created for #HalloweenTreatsWeek! I was sent samples by some of the sponsor companies but as always opinions are 100% mine.

I love doing themed food for all the occasions but especially for Halloween!

Halloween practically begs you to come up with all kinds of creepy looking sweets.

And speaking of begging- my boys beg for them too!

Why wouldn’t they? These sweet cinnamon rolls are a bloody delight on the breakfast table on October 31st!

And, no need to be scared, since they are semi-homemade, they can be on the table in minutes so you don’t have to stress. 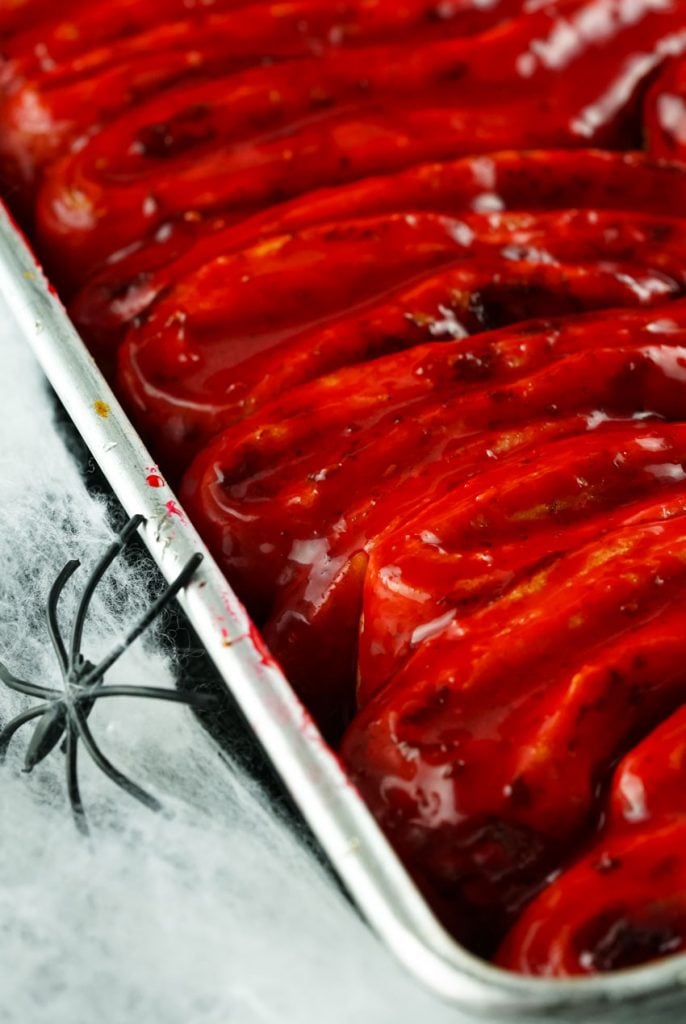 You only need a handful of easy to find ingredients to make this disgustingly good breakfast including: 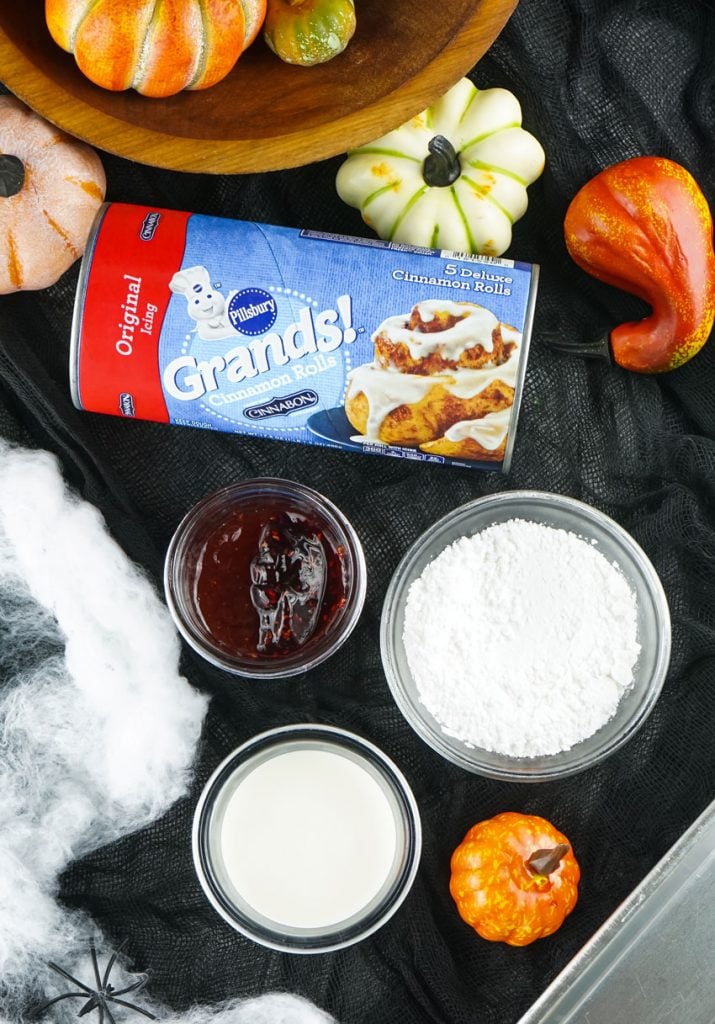 Making these is easier than you might think thanks to the premade cinnamon bun dough.

To make them start by preheating the stove to 350 degrees and grease an 11×15 square cake pan. 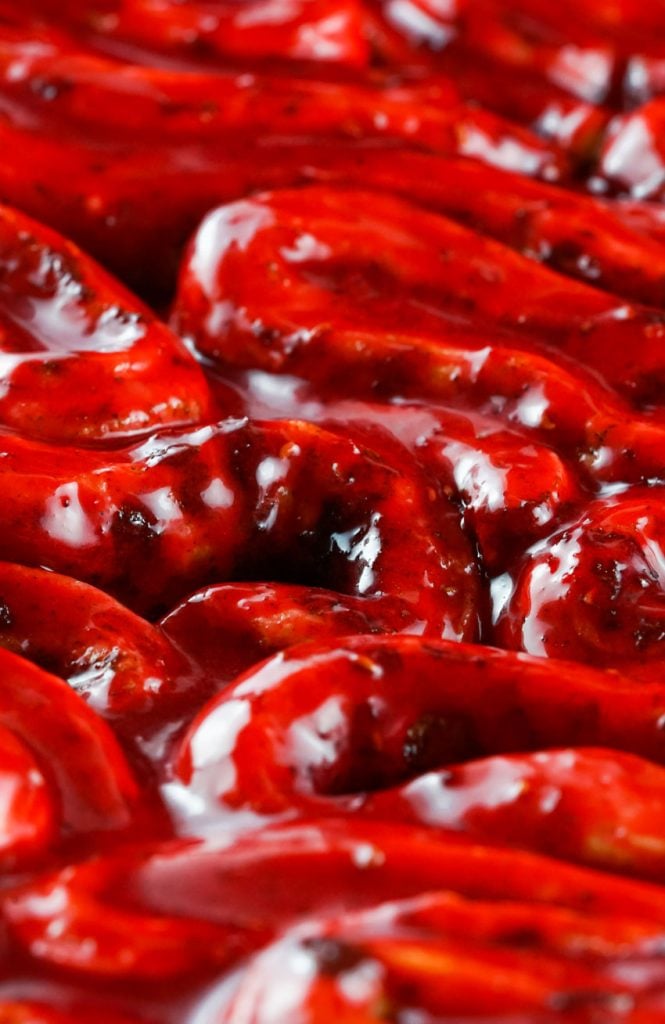 One at a time, unravel the cinnamon rolls completely, and arrange them in a snake pattern in the cake pan as shown.

Bake for 20 minutes or until cinnamon rolls are golden brown on the top. Remove and let cool completely.

Keep them in the pan! 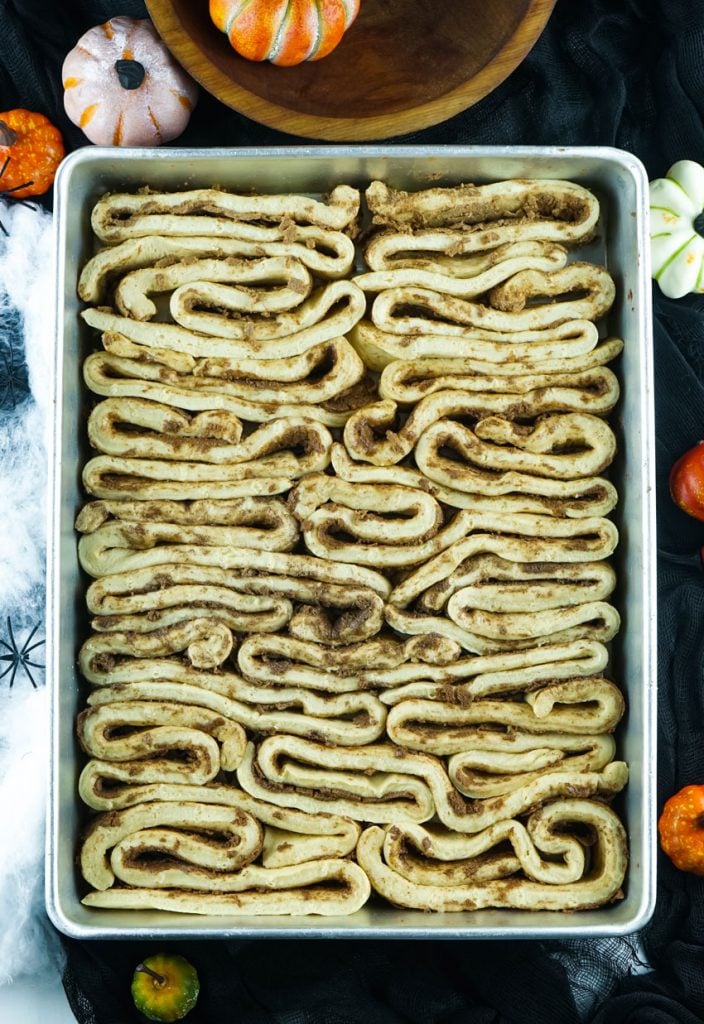 While cinnamon rolls are cooling, make the bloody icing.

If the consistency is too thick, add in more milk a tablespoon at a time. It will be thicker than normal icing, but thinner than buttercream frosting.

Once you get the right consistency, stir in the food dyes to make a burgundy red.

Spoon it over the cinnamon rolls. 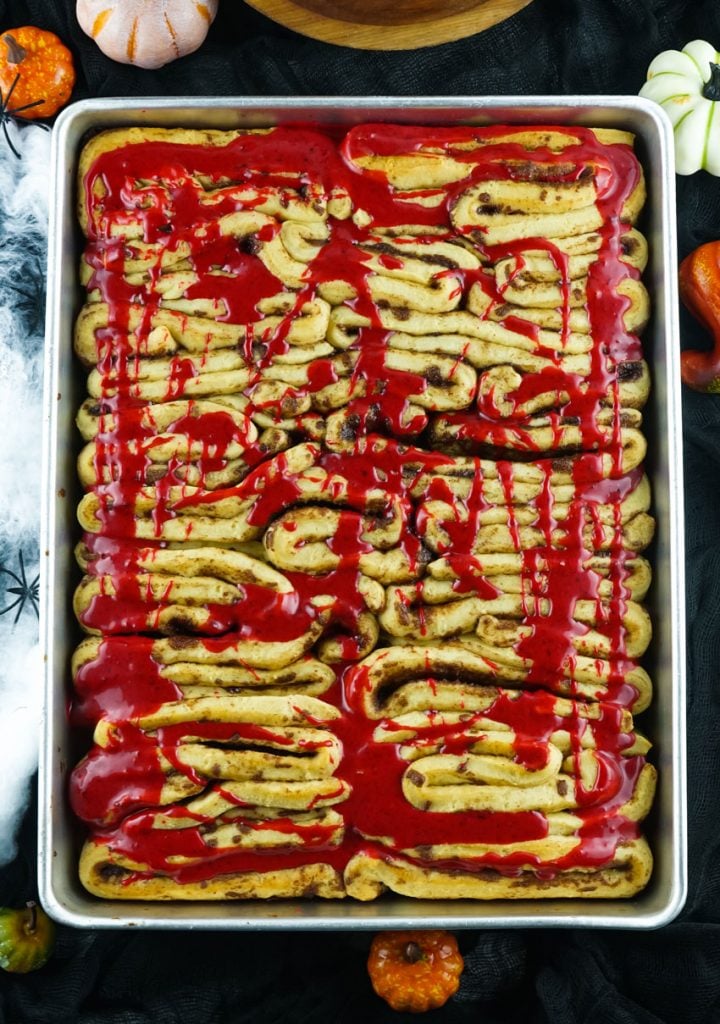 Cover every single inch of the cinnamon rolls with a basting brush or spoon. 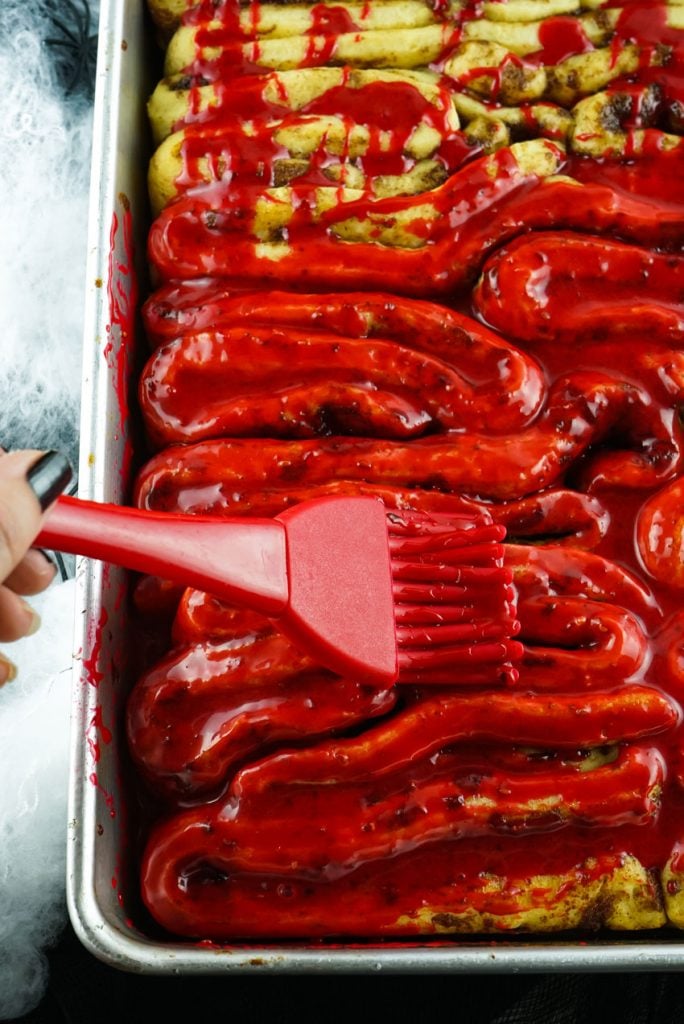 Serve, freak people out, and enjoy! 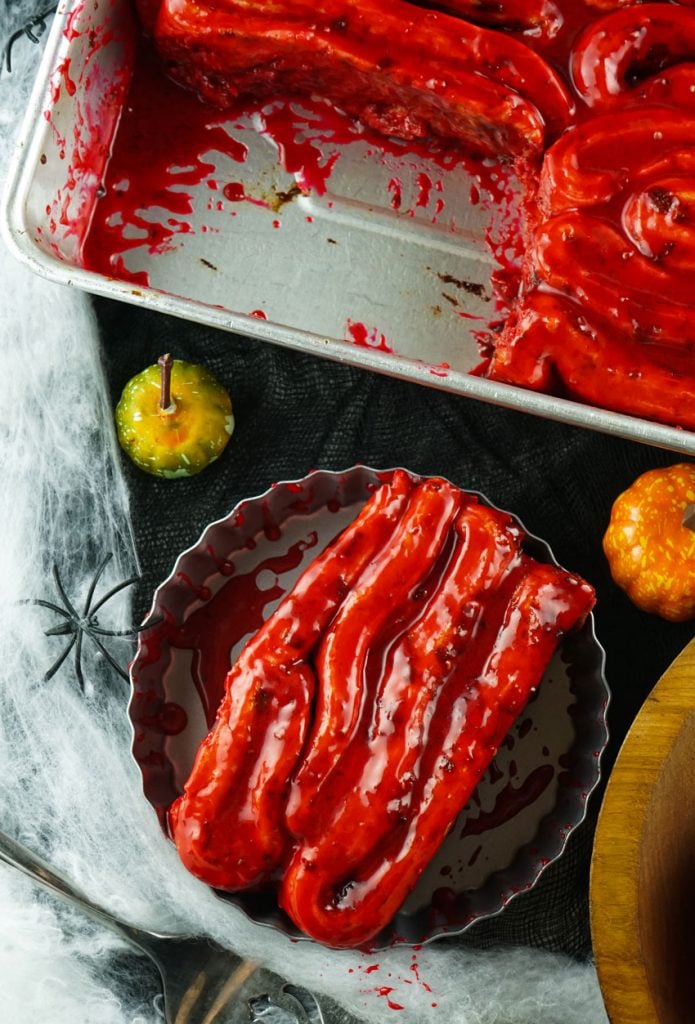 Other Halloween Treats to Gross Out Your Guests

These blood and guts cinnamon rolls are sure to spook everyone this Halloween!

Make them for breakfast Halloween morning or serve at a Halloween party! 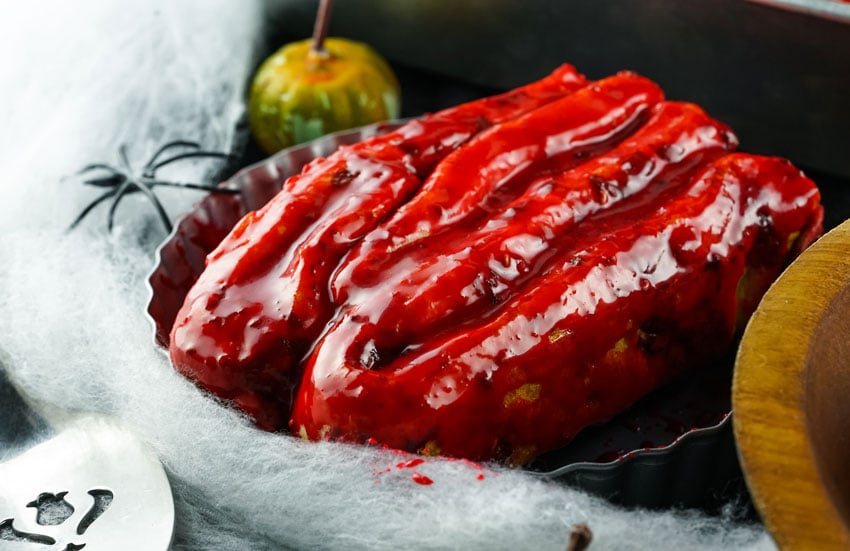 Looking for other Halloween treats to gross out your guests? Try these:

If you’ve tried this BLOOD AND GUTS CINNAMON ROLLS, or any other recipe on my site, let me know in the comment section how it turned out, we love hearing from our readers! You can also follow along with me on PINTEREST, FACEBOOK, and INSTAGRAM to see more amazing recipes and whatever else we’ve got going on!

Don’t forget to keep reading after the recipe card for this year’s #HalloweenTreatsWeek GIVEAWAY INFO! 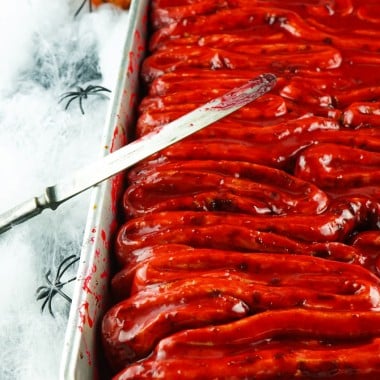 Welcome!!! It is almost Halloween which means it is time for this year’s #HalloweenTreatsWeek recipe and giveaway event!!

#HalloweenTreatsWeek is a yearly Halloween blogging event that is hosted by Angie from Big Bear’s Wife  & its a creepy and haunting week-long event is filled with some amazingly wicked Halloween treats, recipes and some frightfully fun giveaways.

“When witches go riding, and black cats are seen, the moon laughs and whispers ‘tis near Halloween.”

For the 4th annual #HalloweenTreatsWeek event we have 28 hauntingly talented bloggers that are sharing their favorite Halloween recipes throughout the week!

Follow the hashtag #HalloweenTreatsWeek on social media and look at the bottom of each post to see all of the Halloween recipes that we’re sharing!

Giveaway open to US Residents 18 years or older. All entries will be verified. No PO Boxes Please. Prizes will be sent directly from sponsor to winner, bloggers are not responsible for prizes. This giveaway runs from October 11th – October 15th at 11:59PM EST. Winners will be selected soon afterward and contacted by e-mail. Winners will have 48 hours to respond or a new winner will be chosen. There are a total of 1 (ONE) prize pack and therefore we will have a total of 1 (ONE) winners. No purchase necessary. Void where prohibited by law.

Disclaimer: These posts and recipes are part of the week-long event, #HalloweenTreatsWeek but all opinions are 100% mine! We would like to Thank our amazing brand sponsors: Dixie Crystals that provided a prize pack for our giveaways and also sent some samples and products to the #HalloweenTreatsWeek bloggers to use in their recipes.

Check out all of these great #HalloweenTreatsWeek recipes for today