A quick & easy, oh so creamy white cheddar mac & cheese has been given a spooky spin. Double Double Toil & Trouble Macaroni & Cheese is a filling dinner, and the pasta dish that’s perfect for getting the family into the spirit of Halloween. 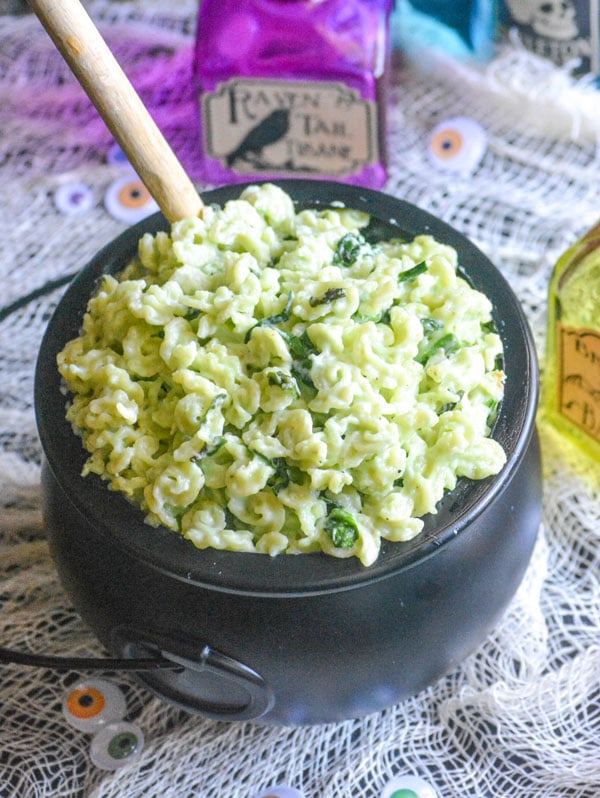 When do you go to the Pumpkin Patch (if you do- I know plenty of people get pumpkins from the grocery store these days). Apparently, we’re in the minority among our own friends for going so early in the season.

We went this weekend, despite the muggy heat and angry looking clouds that promised, but didn’t deliver, any much needed rain or relief. 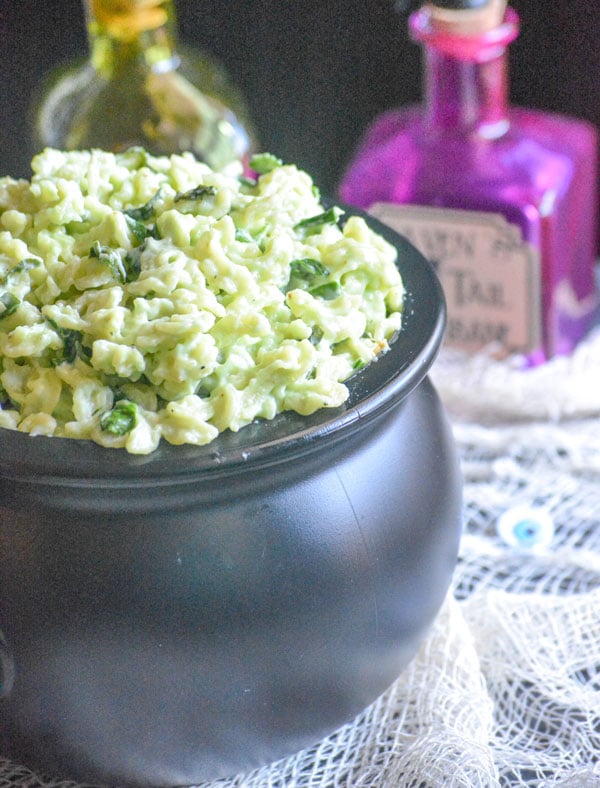 The sons didn’t care- they had a blast as usual. It was just the Hubs and I who were sweaty miserable messes. We had a good time though. It wasn’t hot enough that the kids’ laughter and joy wasn’t still contagious.

Luckily, we were able to get chilled cider instead of hot coca! 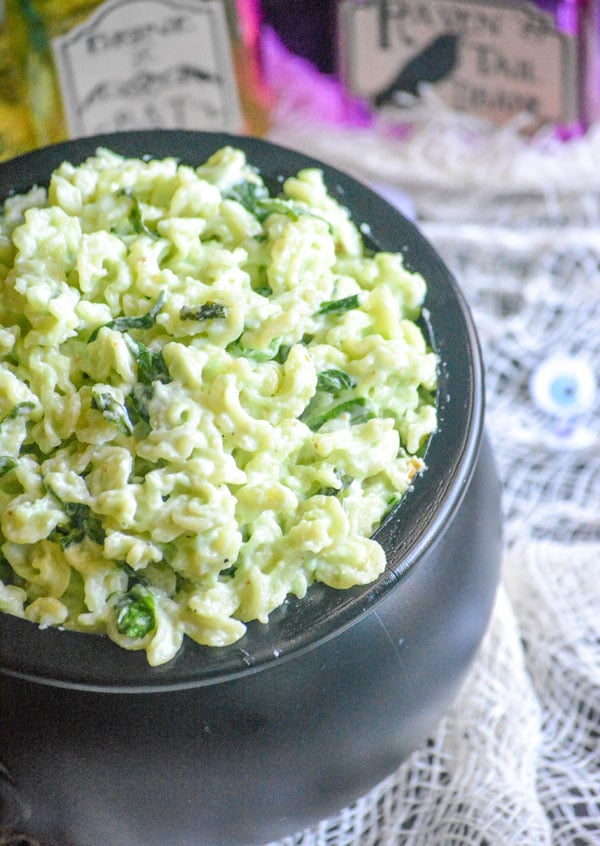 Somehow, as usual, the Hubs managed to carry and not drop 6 gigantic pumpkins the minimum 3 steps for the $20 price tag. While nobody has firm plans yet, the sons are full of ideas on what they’re going to crave/create this year with them.

Me? I’m looking forward to all their seeds after they carve them, and to my own pumpkin that we’ll use to bake a beef stew in. It’s seriously one of my favorite Fall dinners. 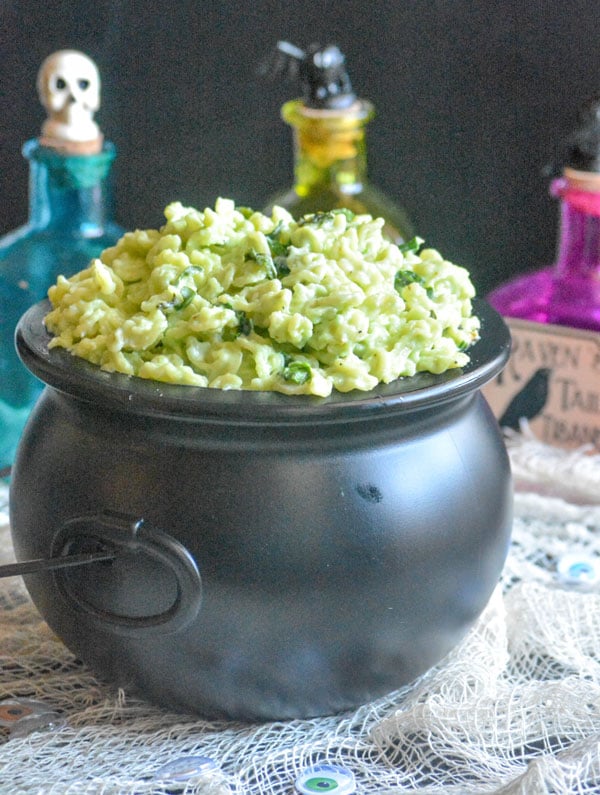 Basically, I treat every holiday the same as we do Christmas- well every major-ish one. We don’t wait until the last minute and cram all the traditions in. About a month beforehand we start slowly rolling them out. Hence going to the pumpkin patch this past weekend, and starting to decorate the house this week.

Food is one of my favorite ways to get everyone in the ‘spirit’ and excited for the BIG NIGHT. Often that takes the form of snack foods or baked goods for Halloween. This year though, I decided we needed something a little more fun and a little more filling as we cooled off in the ac after picking pumpkins in an outdoor sauna. 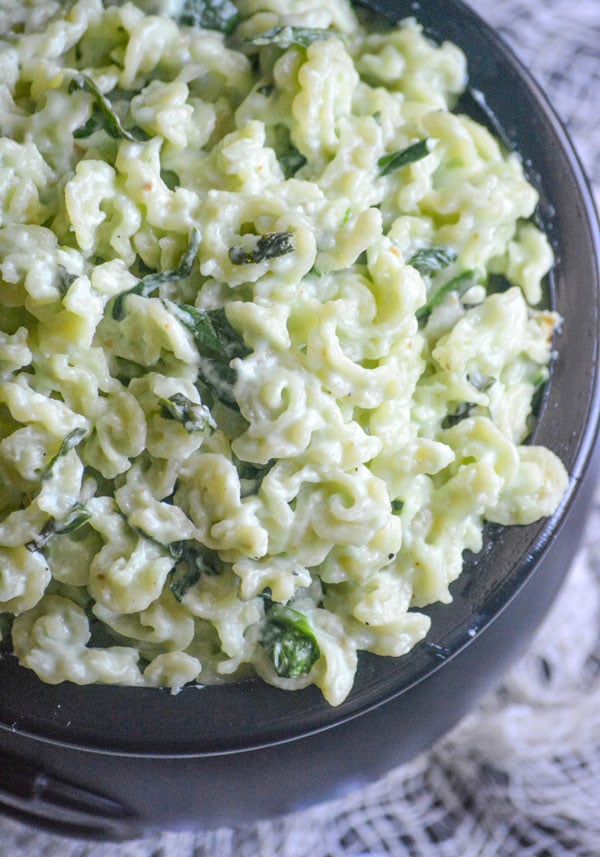 It may sound scary, but this Double Double Toil & Trouble Macaroni & Cheese is actually really easy to whip up, and includes a healthy amount of spinach.

It’s basically ‘bubble’ shaped pasta stirred into a luscious white cheddar cheese sauce, with ‘toxic’ bits of spinach thrown in. We dyed it an eerie shade of green (green means dangerous, right?) and served it in a spooky plastic cauldron.

Serve this for dinner (bonus effect points for it being after a visit to the pumpkin patch), and you’ve got a simple dinner that the kids will go gaga for after the first bite. It’s just the thing to get everyone in the mood for Halloween and Trick or Treating.

If you’ve tried this HALLOWEEN THEMED MACARONI AND CHEESE, or any other recipe on my site, let me know in the comment section how it turned out, we love hearing from our readers! You can also follow along with me on PINTEREST, FACEBOOK, and INSTAGRAM to see more amazing recipes and whatever else we’ve got going on! 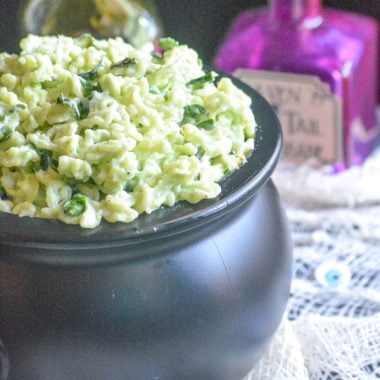 recipe adapted from Cooking With Curls
Did you make this recipe?Share it on Instagram @4sonsrus or tag #4sonsrus!