This delicious throwback might have you reconsidering your chicken pot pie. This vintage recipe for Pennsylvania Dutch Chicken & Dumplings is the original, and the other’s just a cheap knock off. Serve an old fashioned Southern-style dinner your family will love with this tasty treat. 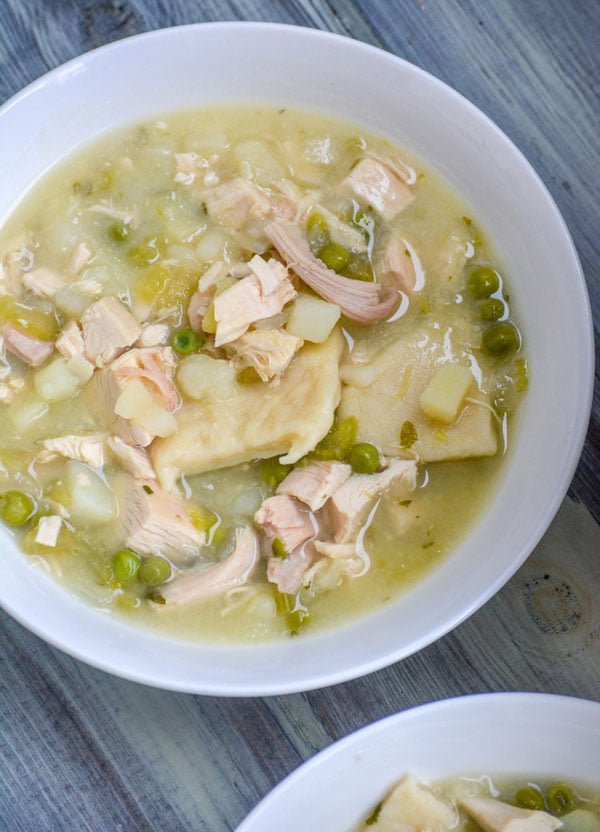 When you think of Chicken Pot Pie, what comes to mind? Let me guess. Images of creamy chicken and vegetable filling sandwiched between two layers of buttery, flaky pie crust. Am I right?

That is chicken pot pie, but not the version my family’s originally familiar with. 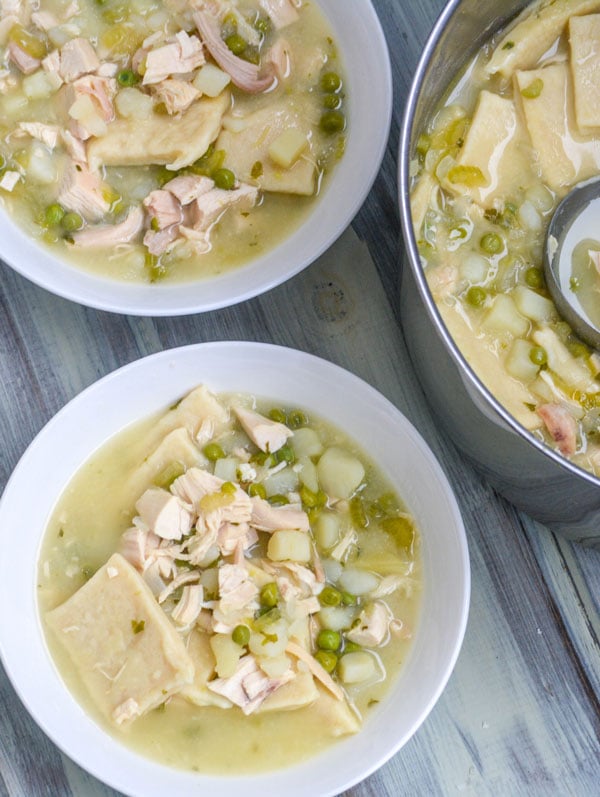 They wouldn’t even consider a crust, instead their ‘pot pie’ includes thick square noodles. They’re amazing, and a true calling to the card-holing carb lover in all of us.

It all originated from a European, probably English, dish that was essentially throw all our leftovers in a pot. Boil them until they’re a flavor-infused sensation, and then add pastry.

All the best ideas, and use of leftovers. Leading to the best of modern, old school interpretations.

The Pennsylvania Dutch are typically of German descent, sometimes Swiss, and while this dish originated in Europe as a way to stretch leftovers- it was them that began adding the thick slippery noodles to the broth. 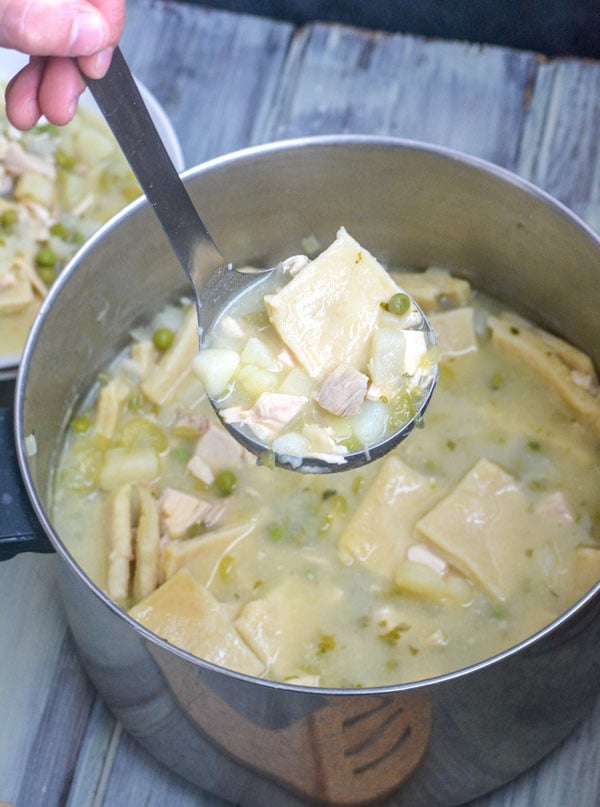 It also explains how our family, who eventually settled in Virginia, shifted to calling it Pennsylvania Dutch Chicken & Dumplings instead of pot pie.

The noodles are what separates it from all the others, and while most people state-side would call them ‘dumplings’ nowadays, they were originally referred to as ‘bott boi’.

Thick, square egg noodles- this really was originally an everything and the kitchen sink style recipes, and the noodles were added to stretch it farther.

A meal after my own heart. Period. Regardless of culture or time period, but I do love knowing where a good dish came from.

THE MAIN STAPLES OF THIS DELICIOUS DINNER?

Again, super simple- and a great way to stretch the week’s groceries. It was like the original make the most of your money meal, except they stumbled onto something truly great. 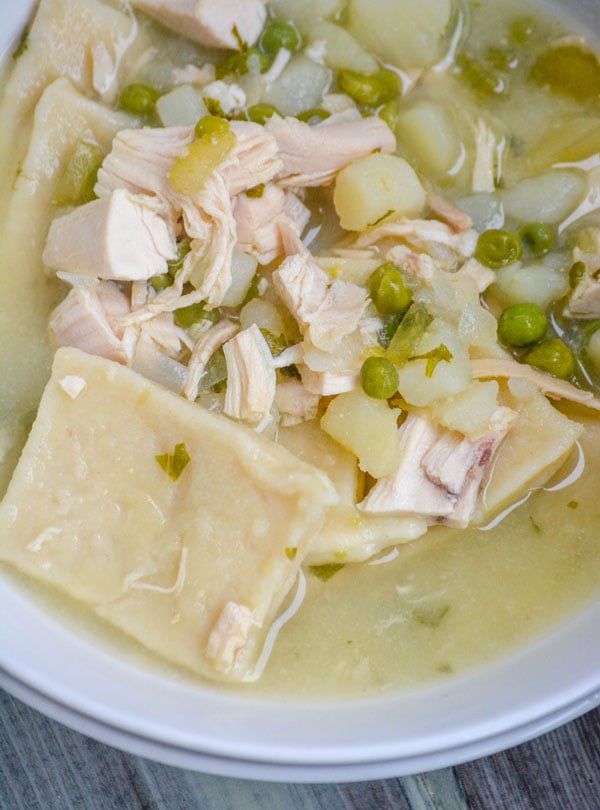 This cultural favorite can’t be forgotten, and frankly deserve to be spread out to the masses. People don’t know what they’re missing.

And trust me, this Pennsylvania Dutch Chicken & Dumplings (or pot pie, depending on where you’re from) is something everyone should experience.

A rich broth of chicken is infused with fresh veggie flavor, studded with onion, potato, celery, peas, and carrots.

The noodles are added and boiled to perfection, then the dish is seasoned with salt & pepper, and thickened with a simple corn starch slurry. 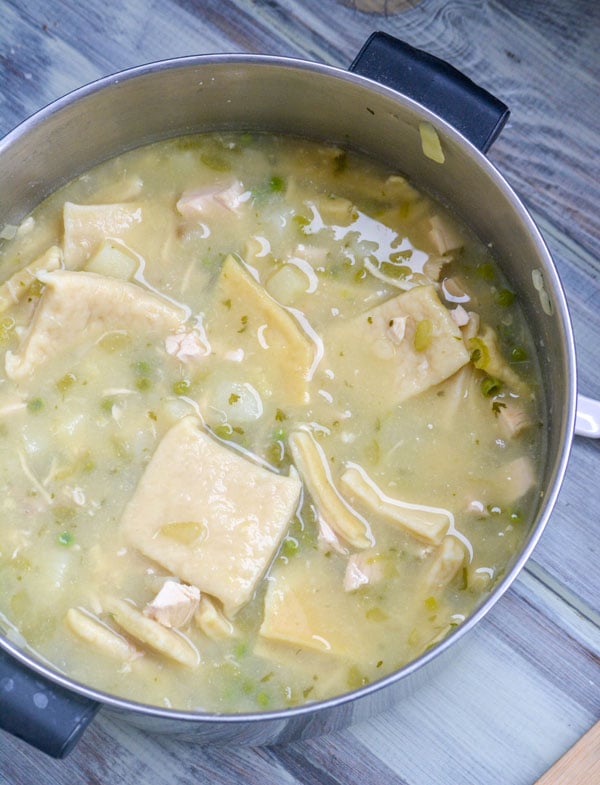 Check a page out of your Grandma’s recipe book, and make this Pennsylvania Dutch Chicken & Dumplings for your family. It’s the perfect opportunity to create a new tradition.

If you’ve tried this PENNSYLVANIA DUTCH CHICKEN & DUMPLINGS, or any other recipe on the site, let me know in the comment section how it turned out, we love hearing from our readers! You can also follow along with me on PINTEREST, FACEBOOK, and INSTAGRAM to see more amazing recipes and whatever else we’ve got going on! 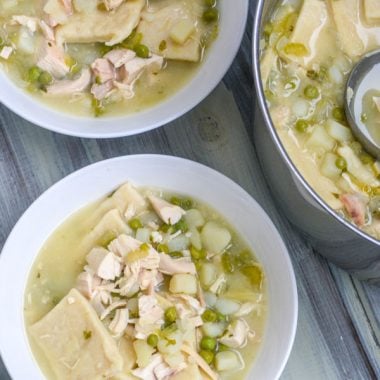 For The Noodle Dough

To Make The Noodle Dough

To Make The Broth