Are you as big a fan of the classic Asian-American dish as we are? Give it a fun new spin with a big old bowl full of our Chinese Beef & Broccoli Soup. It’s the take out, fake out dish you’ve never had and didn’t know was missing in your life! 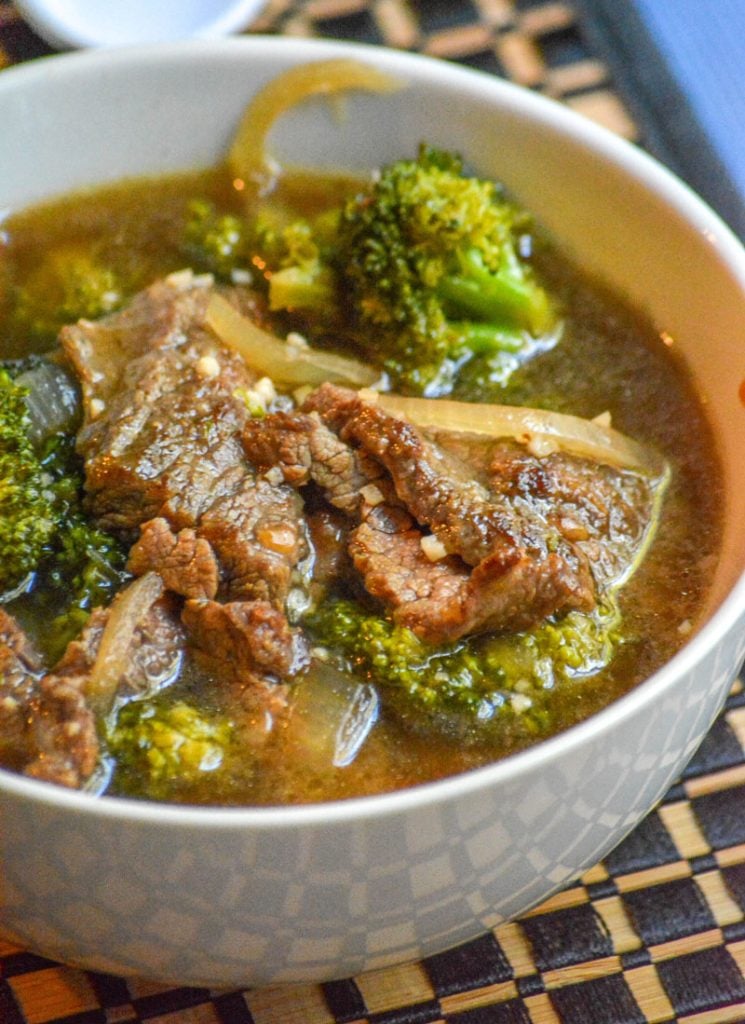 One New Year has come for us, 2019 is here and going strong- and Chinese New Year is right around the corner. New year, new beginnings, new tastes to try- to combine, to sample, to savor.

I have a deep affinity for all special occasions, and any excuse to try new things. 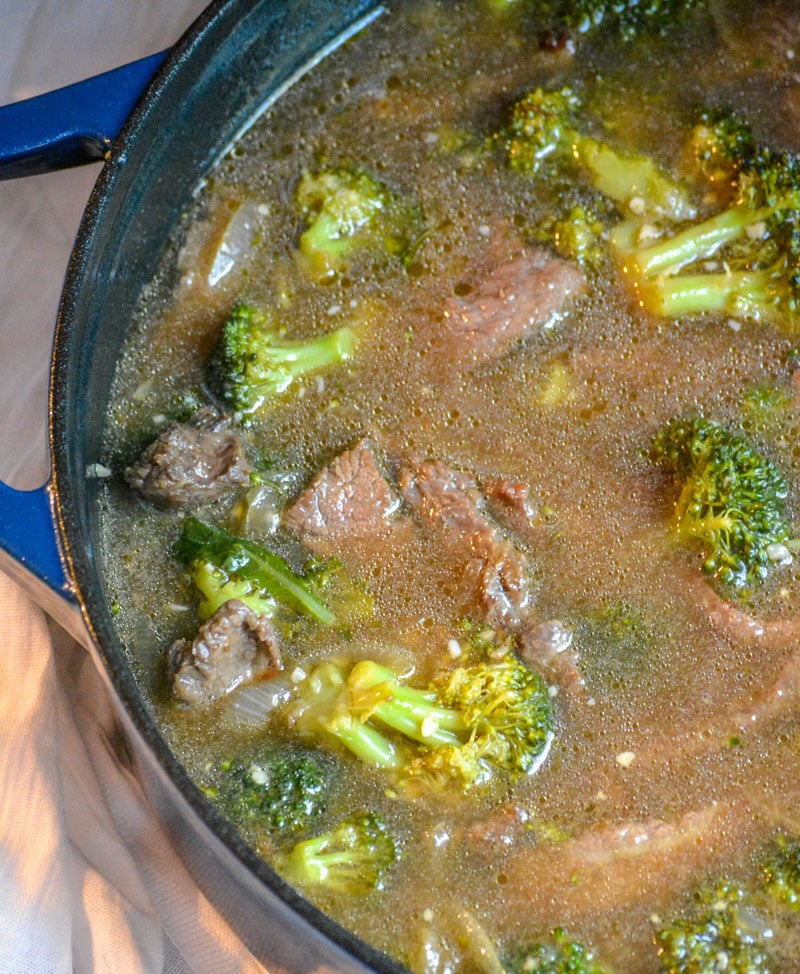 Hands down, my favorite Chinese take out dish of all time? Beef & Broccoli. It’s my go-to order, one where I feel pretty secure no matter where I am that it will be pretty dang delish.

Beef & broccoli is arguably up there on the ‘healthier’ end of things where the take out menu’s concerned. It’s basic elements remain the same though. Luckily. 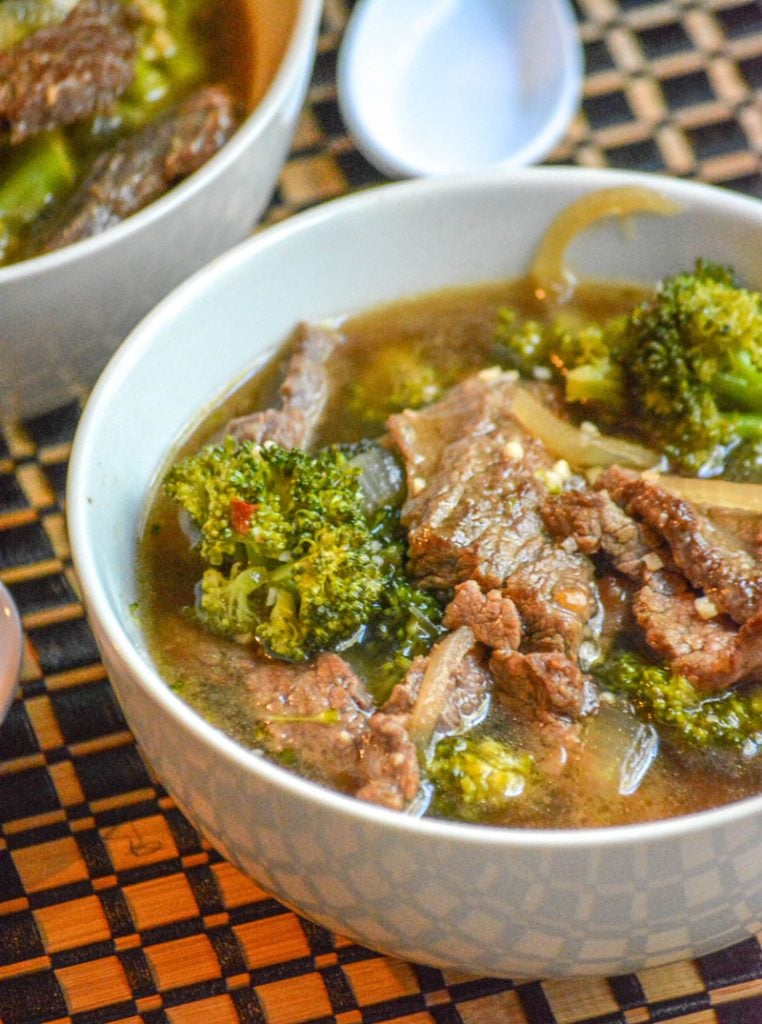 Tender strips of juicy beef are seasoned & seared, combined with perfectly cooked broccoli- a little bit of crunch left despite the softness-, and stirred into a rich, savory brown sauce.

Sounds like Heaven in a take out container. But would you believe me if I told you that it could be, would be, able to get even better than that?!

My friends, I’m here to tell you that with a new brothy twist- that’s exactly what happened with the creation of this Chinese Beef & Broccoli Soup. 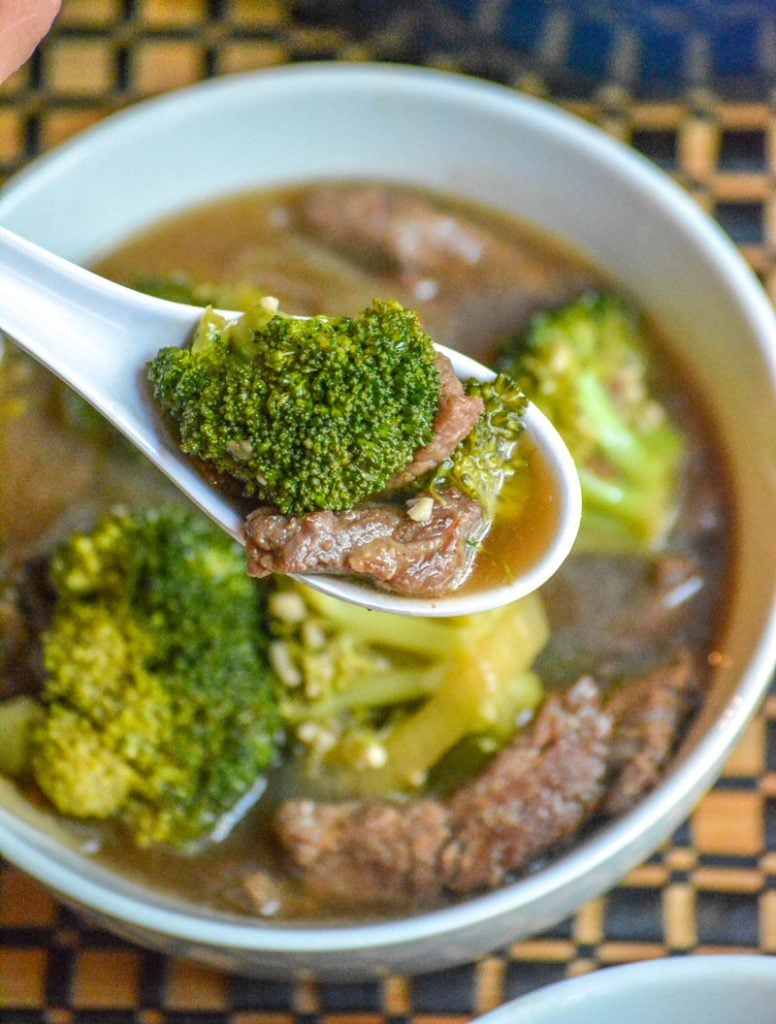 I purposefully keep an eye out at my local grocery stores for then particular cuts of beef are put on sale, or even on clearance. Flank steaks are one of them.

They’re the perfect cut for using in my favorite Chinese take out recipes. I just freeze them once I get home, and pop out & defrost when needed.

For this Chinese Beef & Broccoli Soup we want thin strips of steak about 1/8th of an inch in width, and about 2-3 inches long.

As with successfully cutting any steak so that it’s tender and not tough when cooked, make sure to cut against the grain.

Those tender strips of flank or skirt steak are then seared in olive oil until barely cooked- but incredibly tender- and transferred to a waiting dish where they’re covered and continue cooking with their own heat and rich juices.

Strips of crisp white onion and tangy garlic saute briefly, then a small amount of beef broth is added to deglaze the pan.

Those beautiful browned bits that stick to the bottom when searing the meat? Those are flavor nuggets we do not want to leave behind. Some ginger and salt are added for seasoning.

We’ve kept the seasonings simple in this recipe, but don’t skimp or leave any out. While they are simple, each one is key to getting a rich flavorful broth that mirrors the taste of the brown sauce in it’s takeout counterpart. 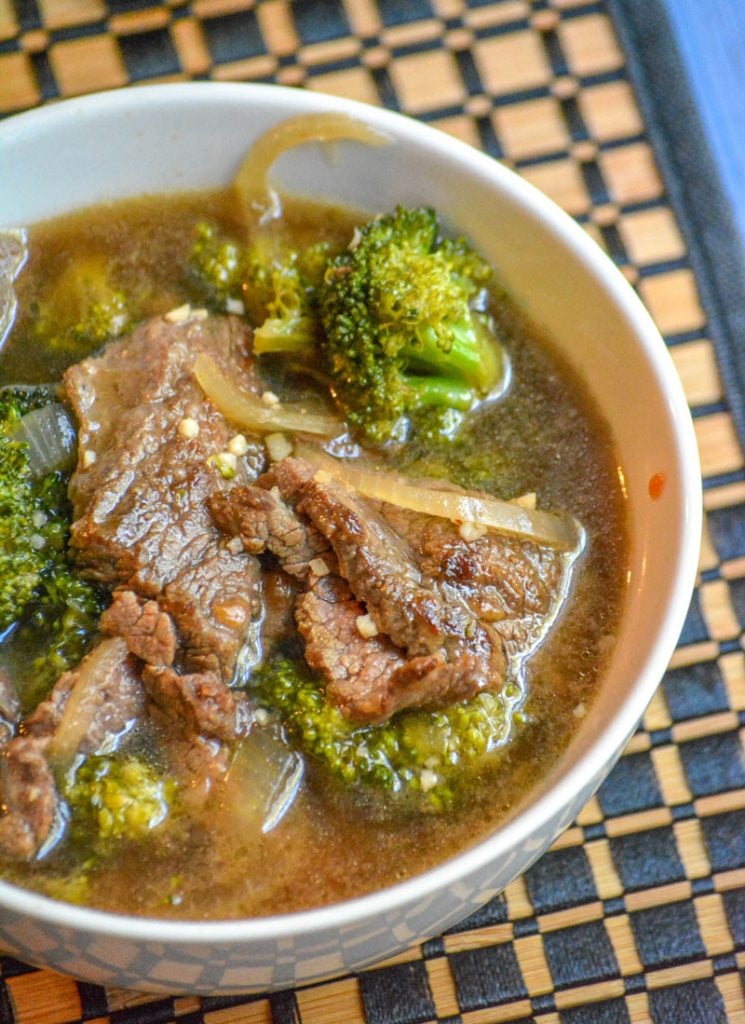 Now we’re going to stir in the rest of the broth, and the broccoli florets, and bring this whole pot of soup to a rolling boil. Once we’re boiling away, stir in the oyster sauce and the chili paste.

I would recommend only adding one tablespoon initially, taste testing, and then deciding on adding the second tablespoon.

Trust me on this tid bit, because this paste is spicy! We’re looking for it to add a slight undercurrent of slice, not a kick in the pants.

We’re gonna continue to simmer this soup, but only for two minutes or so.

We want that perfect broccoli, the gold standard of any decent beef & broccoli. Slightly soft, definitely cooked, but still crisp- all at the same time.

The soup’s done at this point, so uncover that meat and stir it and any juices in that dish back into the pot. Serve it right away for maximum flavor and effect.

A Couple Quick Notes About This Beef & Broccoli Soup Recipe: 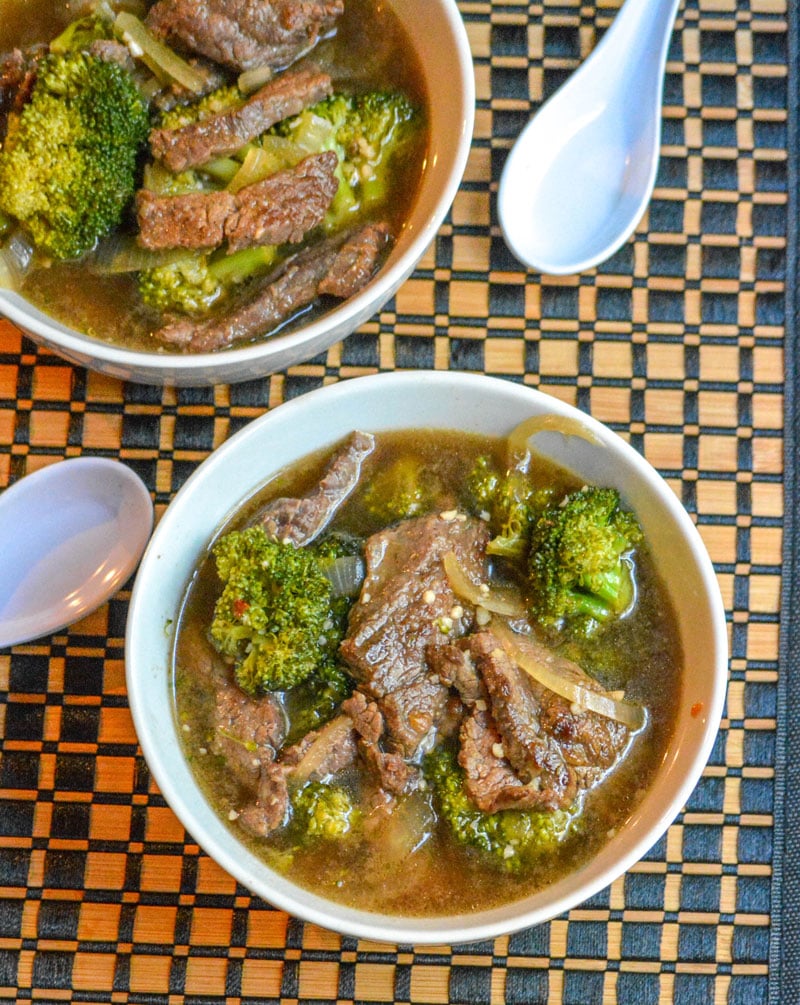 Surprise yourself, and fake out your taste buds, with a big bowl of this amazing Chinese Beef & Broccoli Soup. It tastes just like the real thing, but in a soup bowl. It’s the yummiest surprise! 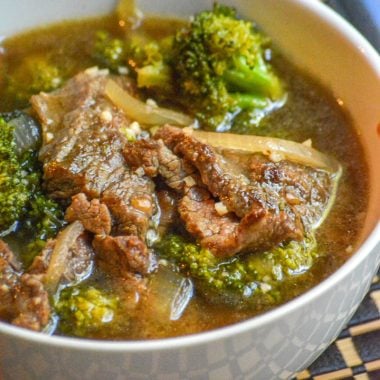 recipe adapted from The Food Charlatan 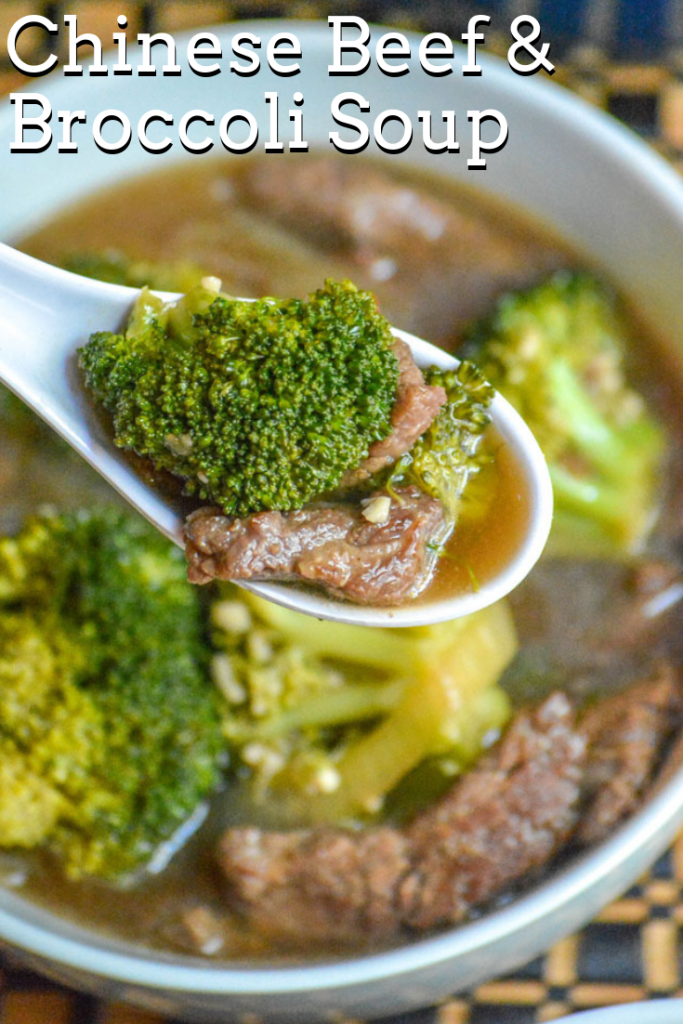