We’ve updated the Italian American classic, by sticking it in between a crusty Ciabatta bun that’s been spread with an irresistible sauce- with just enough left over for dipping. Cheesy Chicken Parmesan Sandwiches & Basil Garlic Aioli is a delicious dinner your family will love, that will even make your Nonna proud. 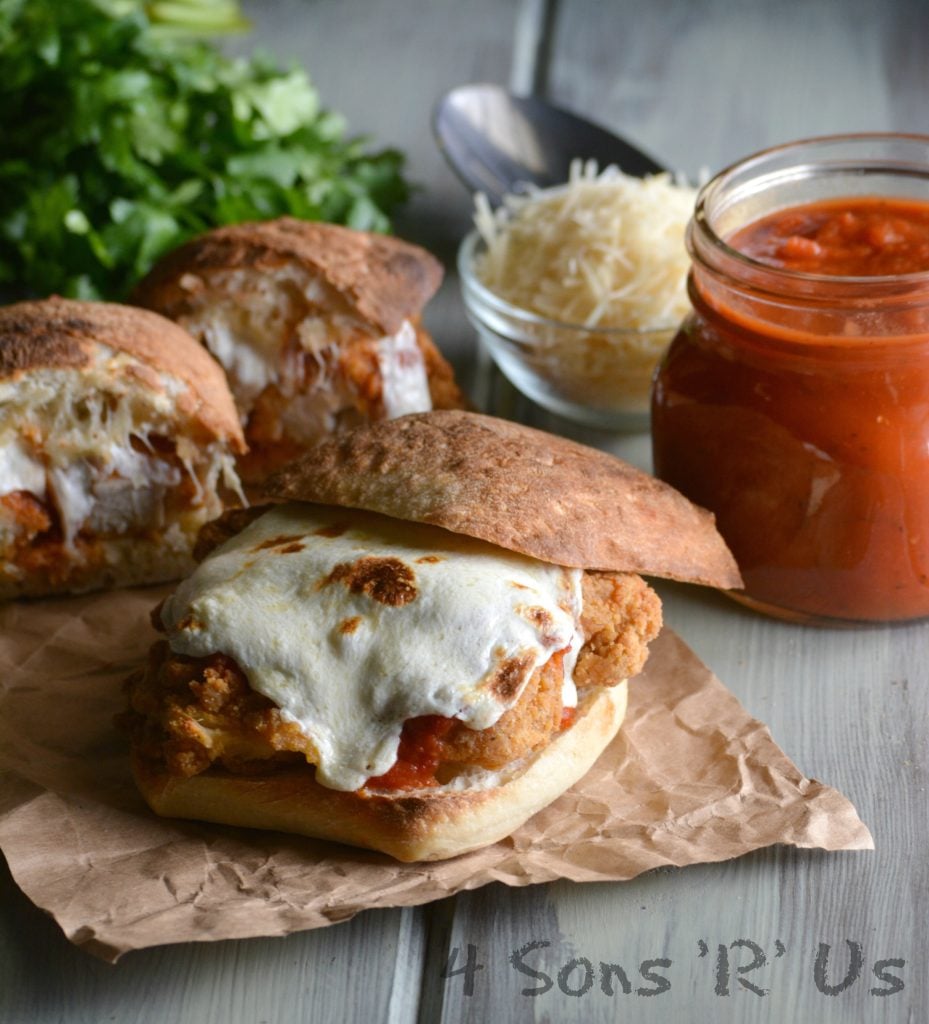 Sandwiches. They used to be the bain of my existence.

Seriously, as ridiculous as it sounds to me now, it used to be a major point of contention between the Hubs and I. He expected me to pack him a lunch, each and every single day. I did it one time to be nice, and it became an expectation from then on out.

Most days, I didn’t mind- but I saw no reason for the big fuss if I forgot. Have you never made a sandwich before? 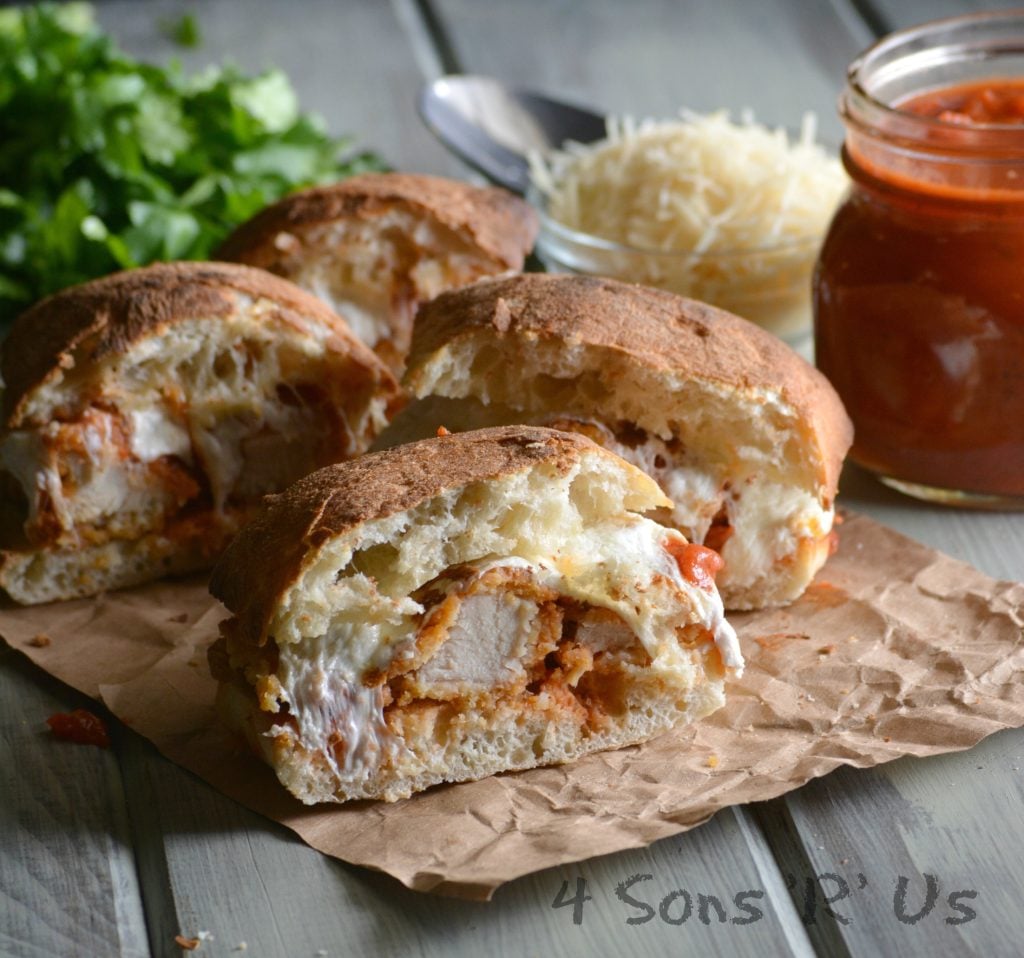 I mean I would make stuff. Stuff you could pack and/or take. But, some days I’ve got a lot on my plate, he could pack it himself.

The night’s I forgot to make him a sandwich? I must’ve wanted him to starve all day without food. It was too much to handle while he waited for his coffee to brew, etc etc.

I got sick of it at one point. So did he. It probably was helped along by the cajoling of his friends, and also by the fact that he was tired of being hungry- but one day he just did it, and the next day, and the next- until he’d made it a habit.

Since resolution of our kitchen Cold War, we’ve discovered some yummy compromises. And never fail to laugh at how hard headed we both were, and still are.

The hubs packs his lunch every single day now. Occasionally he’ll ask me to make something specific for him for the week. Most weeks we have a lot of fun now on our weekend grocery trips planning out what we’ll eat for the week, and even prepping batches together on the weekends. He’s been on a soup kick recently, so last week we made a mega batch of his child hood favorite, his Nonna’s Italian Style Chicken Noodle Soup.

This week he wanted sandwiches. I made him his favorite- ham & swiss on honey wheat (apparently I make the best simple sandwiches- the secret is a little mayo and freshly cracked black pepper). And to help me out, and say thank you for my efforts, he made one of my favorite sandwiches for everyone for dinner. 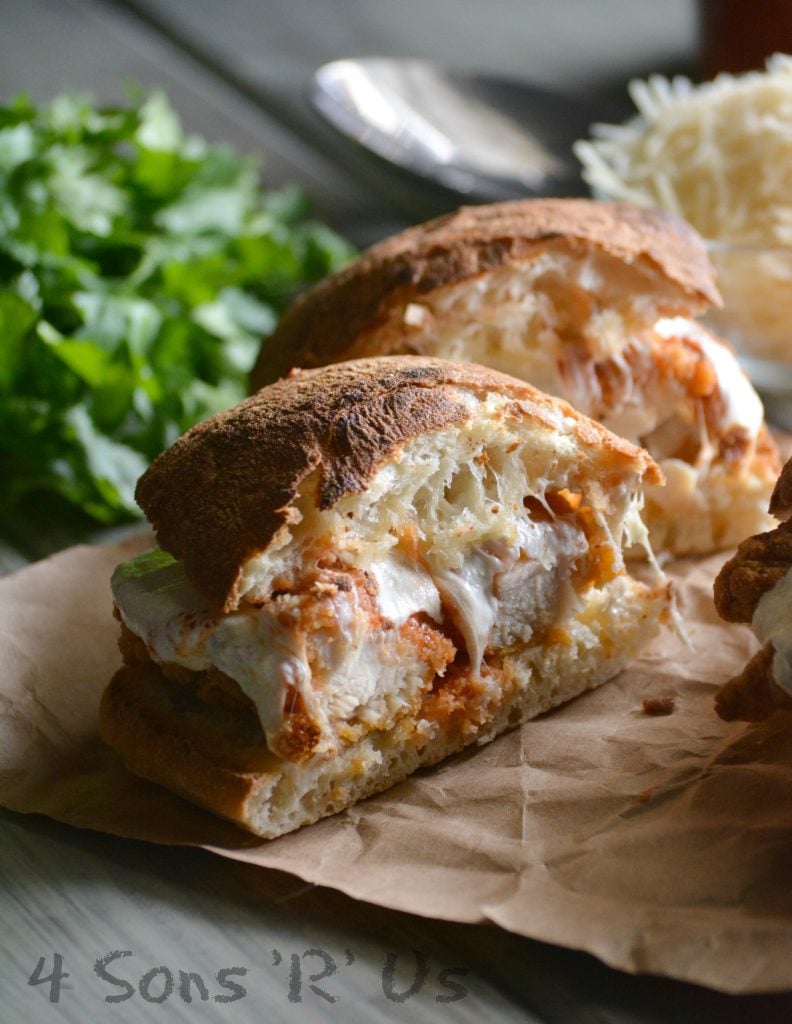 Cheesy Chicken Parmesan Sandwiches & Basil Garlic Aioli are the stuff millennial Italian-American dreams are made of.

These hearty chicken parmesan grilled cheese sandwiches are perfect for dinner, or a gourmet lunch. So tasty, you won’t want to talk, let alone argue, because it would take away from savoring every bite. They leave nothing but happy people, and the occasional peace treaty, in their wake.

If you’ve tried these CHEESY CHICKEN PARMESAN SANDWICHES, or any other recipe on my site, let me know in the comment section how it turned out, we love hearing from our readers! You can also follow along with me on PINTEREST, FACEBOOK, and INSTAGRAM to see more amazing recipes and whatever else we’ve got going on! 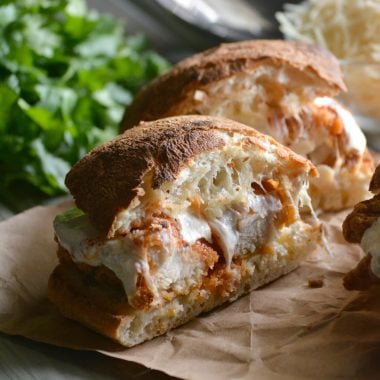 A classic Italian chicken dish is sandwiched between two crusty ciabatta buns with a creamy aioli and miles of melted mozzarella.
No ratings yet
Print Pin Rate
Author: Meaghan @ 4 Sons R Us
Prevent your screen from going dark

For The Garlic Basil Aioli

For The Chicken Parmesan Sandwiches

To Make The Basil Garlic Aioli

To Make The Chicken Parmesan Sandwiches

aioli recipe originally from Self Proclaimed Foodie
Did you make this recipe?Share it on Instagram @4sonsrus or tag #4sonsrus!