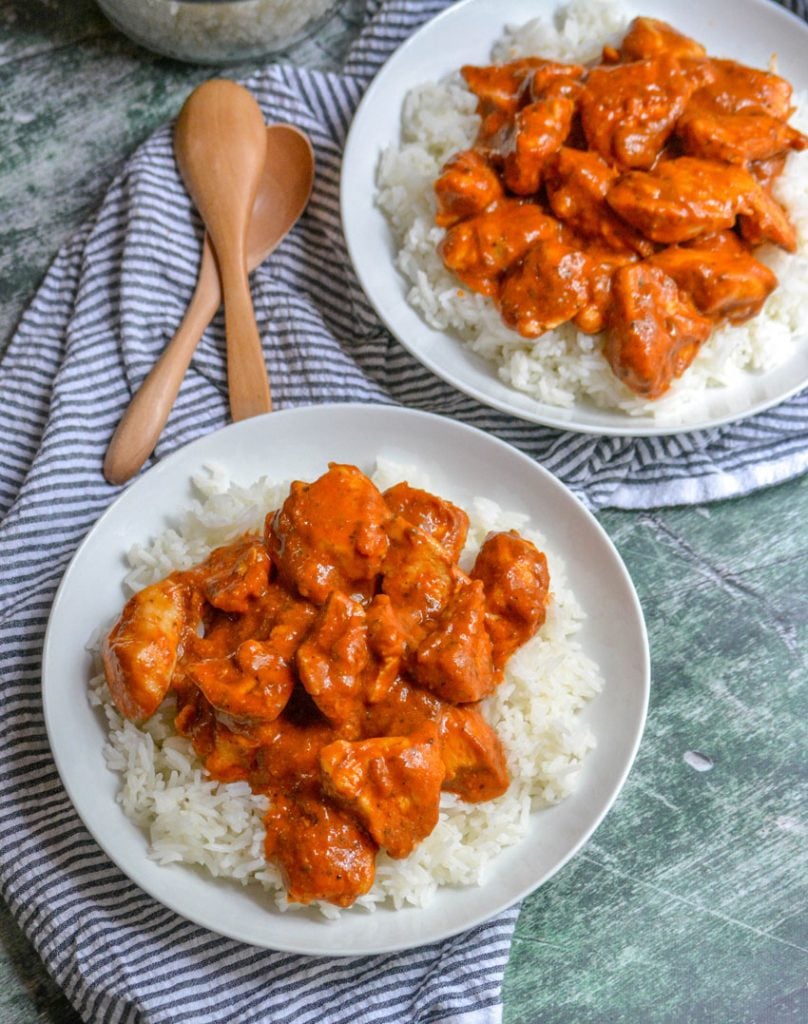 I get tired of the same old thing, night after night. While I serve chicken often in my house because it’s so versatile- sometimes I’m just really bored with my standard chicken recipes.

Whenever boredom strikes and I find myself in a food rut, the best way for me to break out of it is by trying different cuisines. In this case, like Indian.

What is chicken tikka masala?

Have you ever had chicken tikka masala before? It is absolutely delicious.

Chicken tikka is a popular Indian inspired chicken dish. I say Indian inspired because many other places claim it originated there but the dish has distinctly Indian flavors. 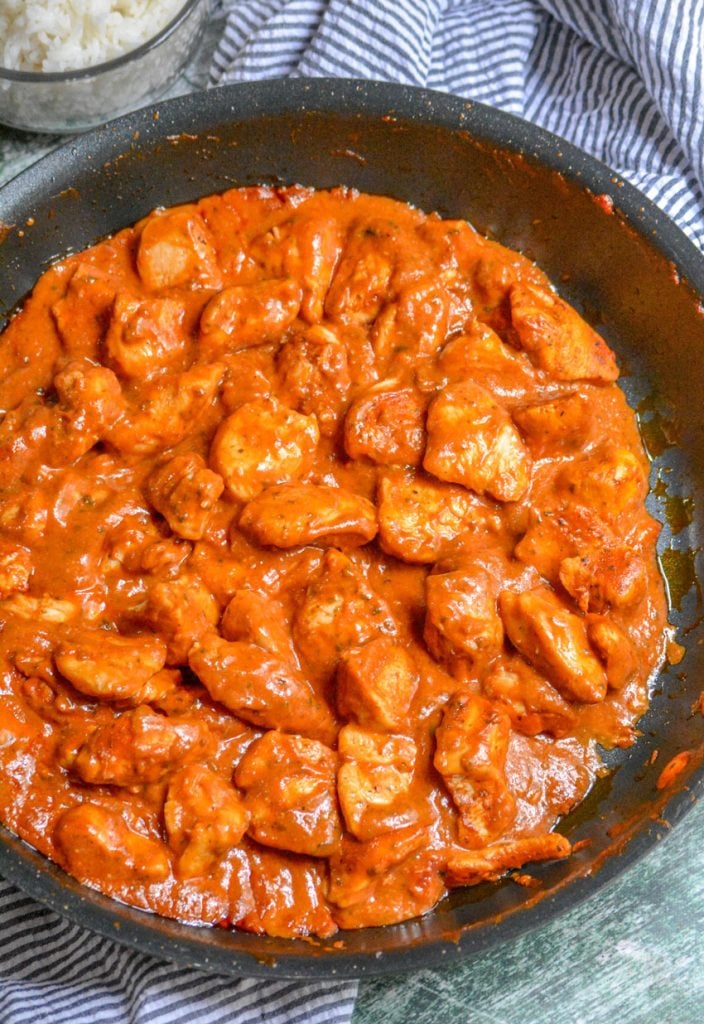 How to Make Chicken Tikka Masala

There are two parts to making Indian chicken tikka masala: the marinade and the sauce. Let’s break it down step by step.

Start by cutting 2 to 3 pounds of chicken breast into roughly half inch pieces. They don’t have to uniform or perfect, but keeping them somewhat the same size will make sure all the chicken cooks evenly & at the same rate.

Then mix minced garlic, ginger, garam masala, tumeric, cumin, and chili powder into plain yogurt. I like to do this in one of my mixing bowls that have a fitted lid, that way I can just throw the prepped chicken into the mixture, cover, and be done.

If you don’t have a mixing bowl with a lid, you can use one and cover it tightly with cling wrap or you can use a large ziplocking bag instead.

Cover the chicken pieces with the yogurt marinade and then you can give the chicken a good toss to make sure it is well combined. Next, you can cover it and put in the fridge for at least 2 hours but up to overnight.

When you are ready to cook the chicken tikka, heat oil up in a large skillet over high heat. Once the oil is hot, you can add the chicken to the skillet and cook until the chicken is nice and brown but not cooked through.

Once it is a lovely brown color, you can remove it from the skillet. Now we’re going to make the sauce. 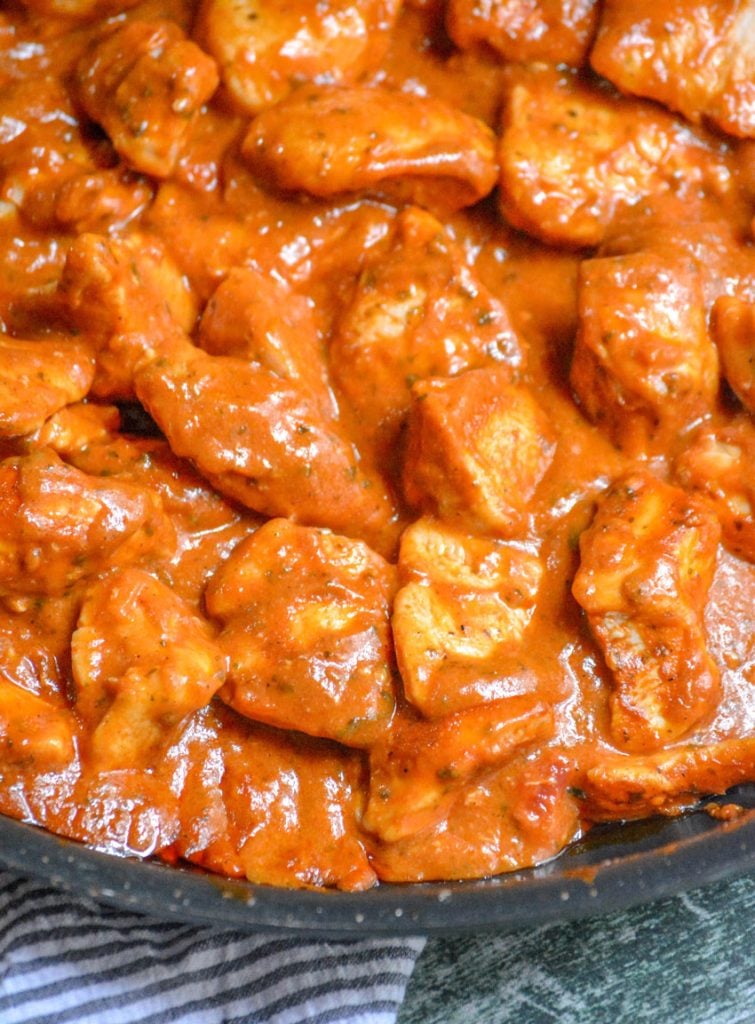 To make the sauce, add the butter and diced onion into the pan. You can let the onions cook until they begin to get beautifully golden and soft, tossing them with the butter so they are well coated.

When the onions have started to caramelize, add the garlic and ginger to the onions. Cook them until they are just fragrant and then add the rest of the spices into the skillet.

Now you can stir in the tomato sauce and the chili powder. Let the sauce come to a simmer and then let slowly simmer for 10 to 15 minutes or until it turns a deep red brown color.

Now you can whisk in the cream and sugar and let that simmer for a minute. To finish, you can add the chicken to the sauce and let it come to a simmer for 8 to 10 minutes.

If you find the sauce has thickened too much you can thin it with a little water, or extra cream, if needed. 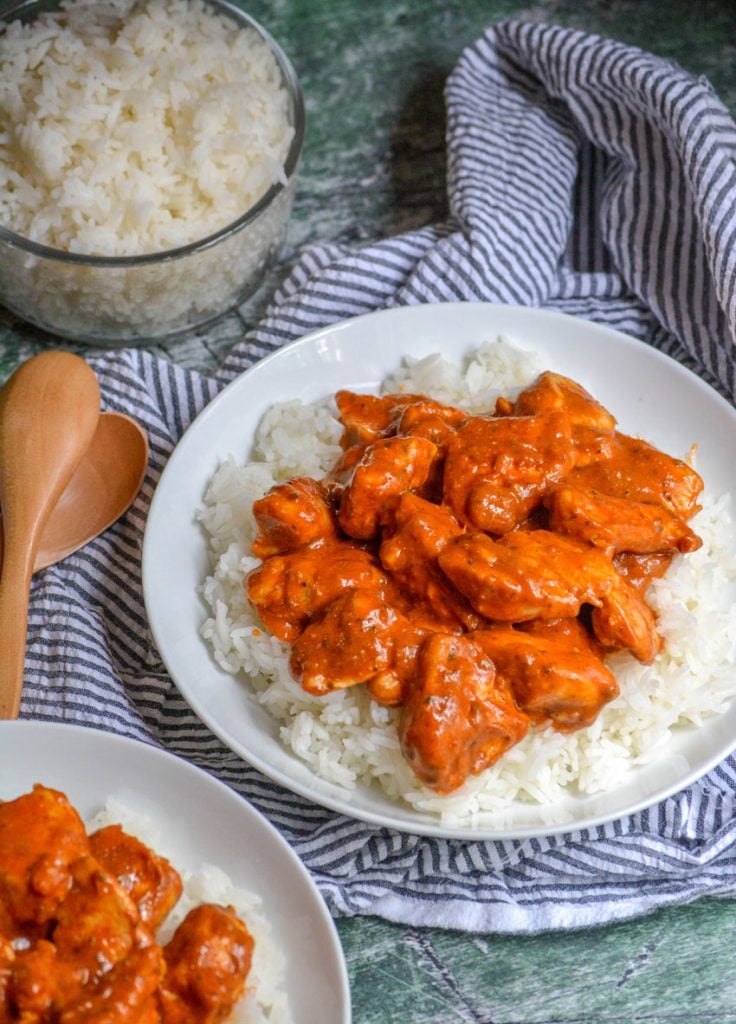 Once everything is cooked, you can spoon the chicken over cooked long grain rice. I recommend Jasmine or Basmati, however you can also use plain white or even brown rice if that’s more to your preference.

I like to garnish it with a little fresh cilantro and serve it with some pita bread or naan. I love to keep both on hand to serve with things like curry chicken salad and Greek yogurt chicken curry.

Trust me, you’ll love the naan on the side for extra sauce dipping. That sauce is so delicious you will want to soak up every last drop! 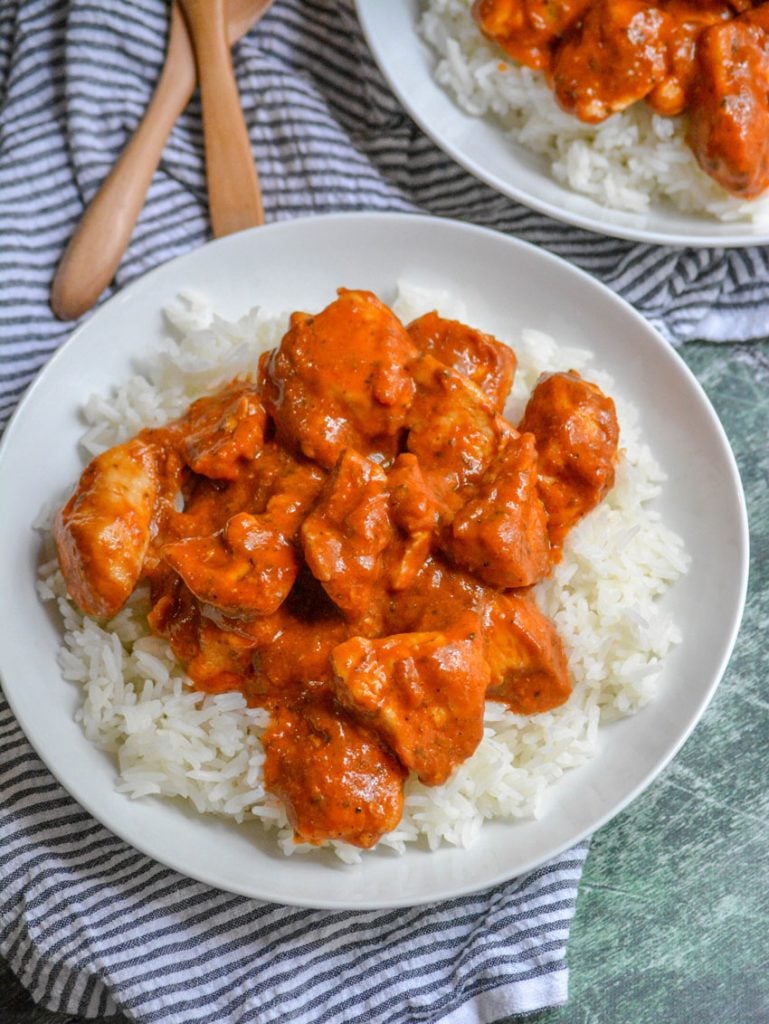 This fragrant, bold Indian chicken tikka masala is my favorite at home Indian dish. Make a batch today and see why I love it so much!

For other homemade takeout inspired recipes that you might love, try these:

If you’ve tried this INDIAN CHICKEN TIKKA MASALA, or any other recipe on the site, let me know in the comment section how it turned out, we love hearing from our readers! You can also follow along with me on PINTEREST, FACEBOOK, and INSTAGRAM to see more amazing recipes and whatever else we’ve got going on! 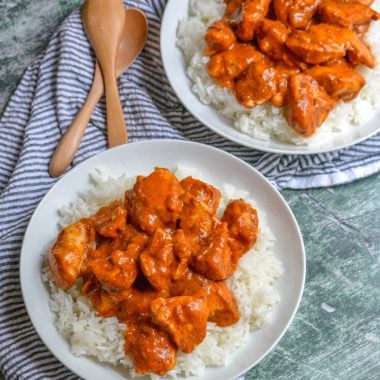