Simple but savory, Beer-Battered Fish Tacos with Cilantro Slaw are the best way to reinvent the classic weeknight taco. White fish coated in the crispiest beer based batter is sandwiched in a fresh tortilla with a tangy citrus based coleslaw for a filling taco that’s a fool-proof, five star recipe. 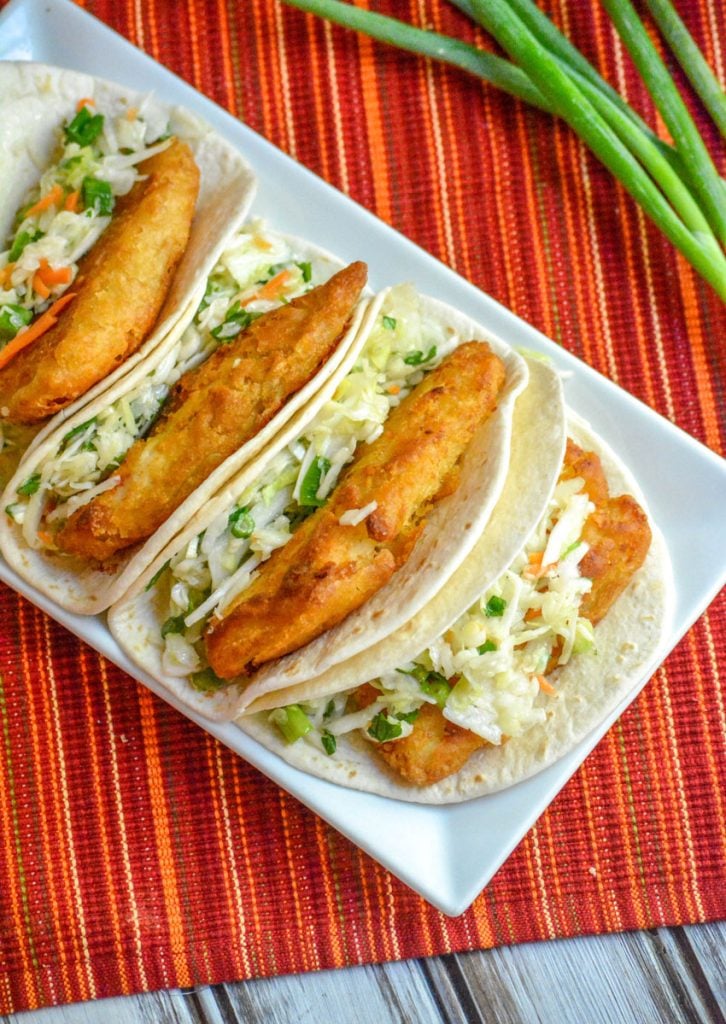 Who here loves a good taco? We sure do.

However we’ve even gone as far as filling them with shredded pork, carnita-style, sloppy joe filling, and chicken and ranch. 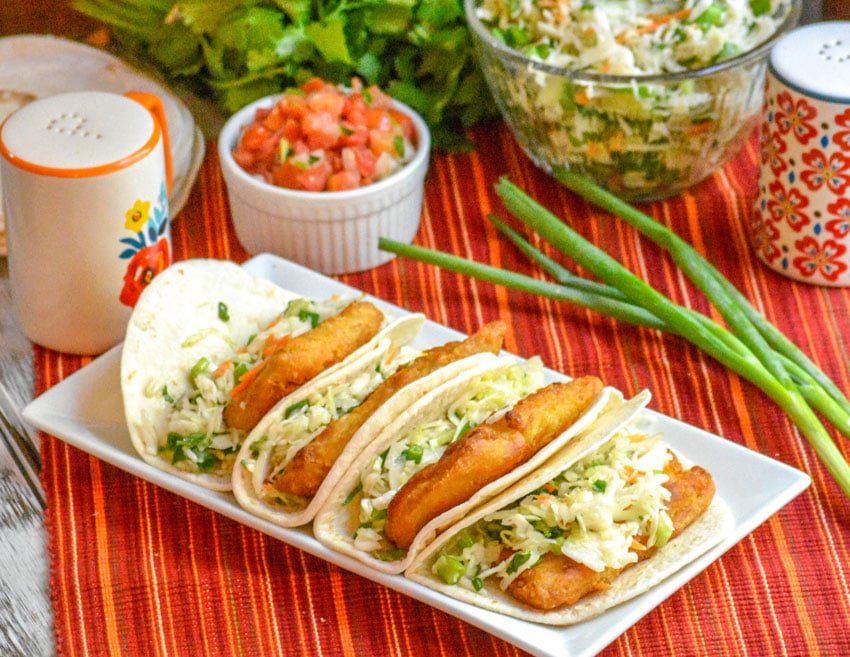 When I first heard about fish tacos though, I was a bit skeptical. I just couldn’t picture it being nearly as good as anything we’d previously tried.

That doesn’t even sound appealing. 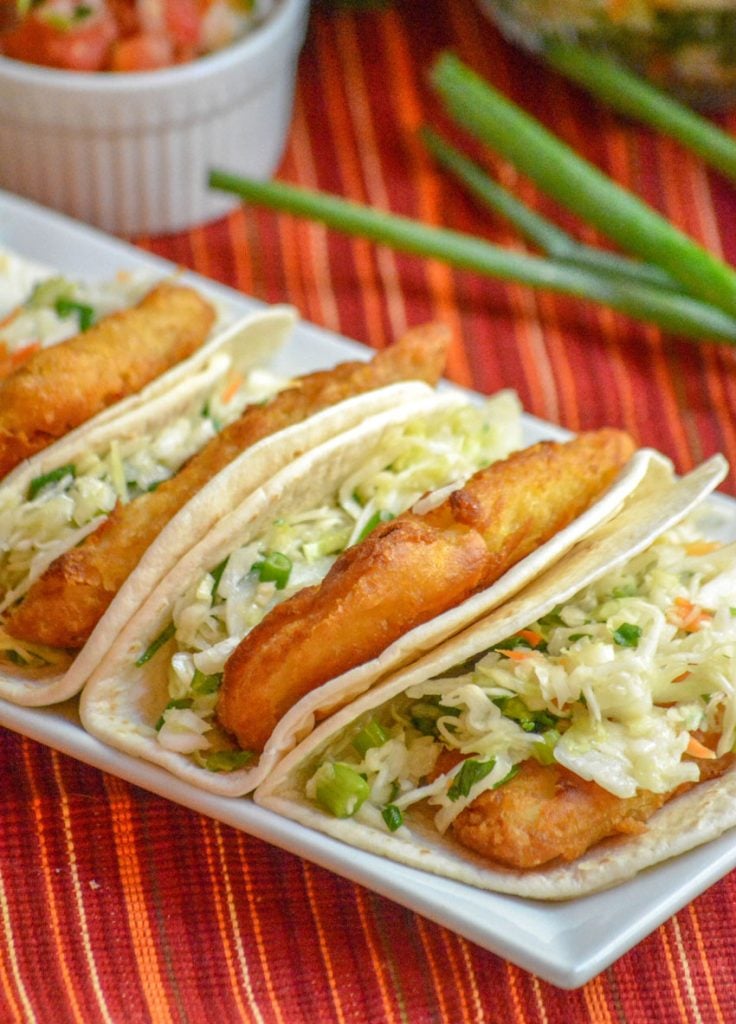 But then it transformed into crisp beer-battered fish, like from our much loved fish and chips, topped with the perfect tangy tex-mex coleslaw, and I knew we were headed in the best possible direction.

Recipes like this one are what I live for. What my food-related dreams are made of.

Yeah, I have more of those than I’d care to admit, but they do offer great inspiration. 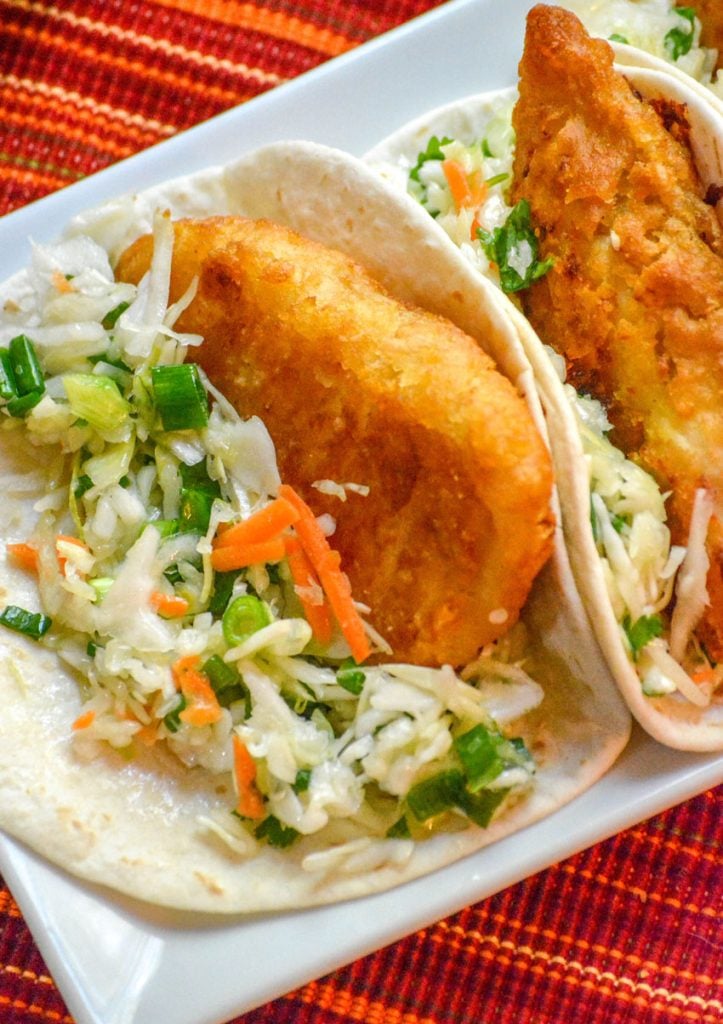 What’s not to love?

We love absolutely everything about these Beer-Battered Fish Tacos with Cilantro Slaw.

What Tortillas Are Best For Fish Tacos?

You’re not beholden to flour tortillas either, although that is our family’s preference.

Corn ones are just as tasty for these tacos, even a tad more authentic if I’m being honest. It’s just one of those things that happens to come down to personal preference.

If you decide corn tortillas are for you, I recommend steaming them before using so they’re soft and pliable and won’t break or tear when stuffed.

If you deicide to use corn tortillas straight from the package, there’s almost an 80% chance they will break or fall apart. Trust me when I tell you, there’s no bigger bummer than a broken shell that let’s your taco stuffings fall out.

How To Steam Corn Tortillas In The Microwave

The easiest method for steaming corn tortillas is going to be using a microwave.

Run some paper towels under a bit of water, then wring them out until they’re just damp.

Spread them out and add a stack of corn tortillas to the center. I usually only do 5-6 at a time.

Wrap them up in the damp paper towel, and place them in the microwave seam side down.

Carefully unwrap them, avoiding any escaping steam- and then use them and top them as desired.

Just be careful though since they’ll be hot. 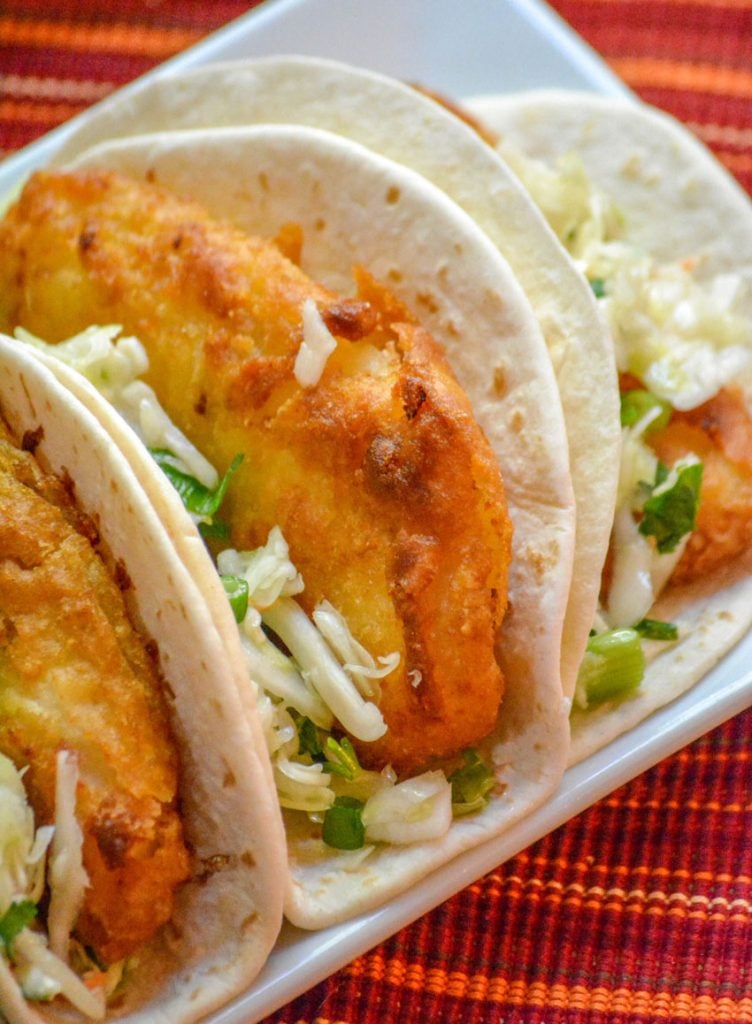 The Best Fish To Use For Beer Battered Fish Tacos

So how do you go from simple fillets of fish to crispy beer battered taco goodness, with a side of slaw that went from drab to fab? It’s not nearly as complicated as it may seem.

The key to any good fish taco, is well- the fish.

This gets it’s magic from a simple, but flavorful beer infused batter. A bit of flour, some cornstarch, simple seasonings from a well stocked pantry, a cup of beer, and an egg are whipped together.

But, you need a fish that will hold up to the battering and frying process without falling apart or getting soggy.

For this particular recipe, you want a firm flesh white fish- I recommend using Alaskan cod. It’s my go to for this recipe. That being said there are other options that will work too.

Use whatever works best for you- whether it’s taste, availability, budget (or all three) that’s the deciding factor.

They’re patted dry, salted & peppered, given a light coat of flour before being given a luscious dip in our beer batter bath.

After letting some of the excess batter drip off, the filets are fried in hot oil for 2-4 minutes, flipping halfway- until golden browned and cooked through.

The cooked fish is then transferred to a paper towel lined plate or platter to drain off any excess oil.

How To Keep Fried Fish Warm & Crispy While Cooking

Having a larger family, I often need to cook several filets per person. I mean, who can stop at a single taco? Fish or otherwise?

To keep the already fried fish warm in the meantime (before ready to plate), I transfer them from the paper towels to a wire rack set on a baking sheet and keep them in the oven on warm, just until ready to serve.

They will stay perfectly warm & crispy without getting soggy while you finish frying the rest of the fish.

You can add fried fish to the rack, as needed, until you’re done cooking. 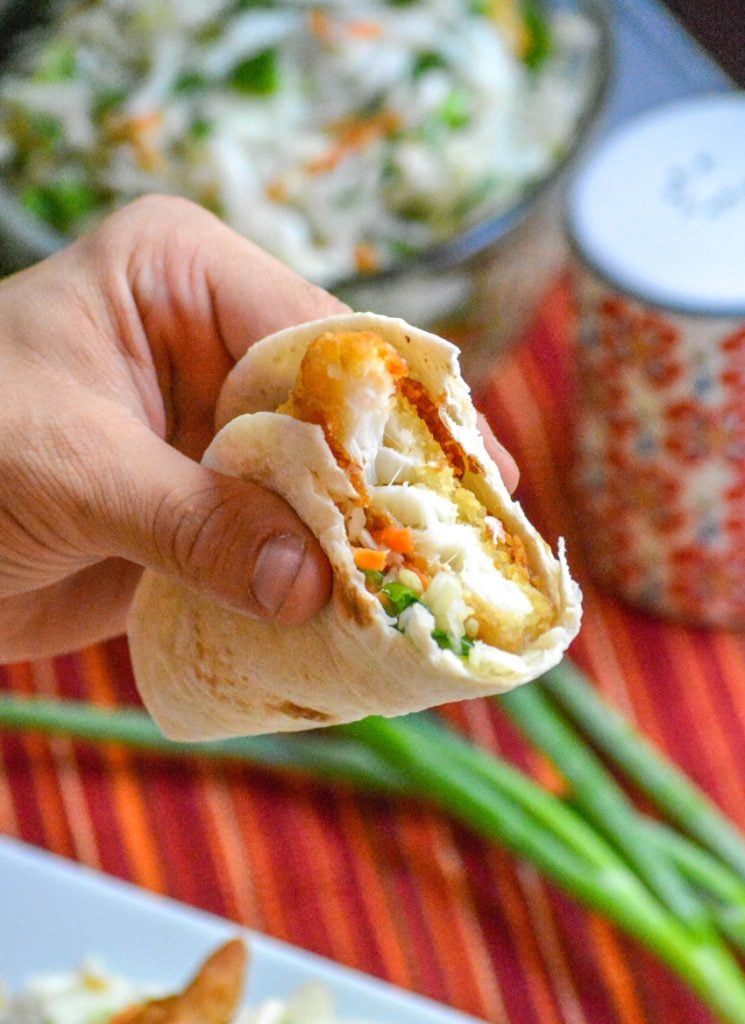 After you’ve cooked those gorgeous beer battered fish fillets, let them chill for a few in a warm oven where they will stay nice & warm, taco ready, and crisp.

How To Make Cilantro Lime Slaw

Here’s another instance where personal preference comes into play. Do you want a warm slaw or a cold one that’s been chilled?

If you want a warm slaw, which I like, you make it now.

BUT if you prefer a chilled version or more time for flavors to marry- then I suggest making the slaw ahead of time, covering, and refrigerating until ready to use.

Whenever you plan to make and serve the cilantro lime slaw, it’s the easiest thing to throw together.

Get out a large-dish mixing bowl, we’re tossing this so more space means less mess and less worrying about making one.

You can taste test if necessary, occasionally I feel the need to add more salt and a pinch of pepper to the mix.

Also, depending on your family’s preferences you may find you want to add a tad more sugar to sweeten it. It really is up to you!

Stuff a filet, or two, into each shell- this will totally depend on the size of your tortilla.

Then top it with a heaping helping of the cilantro lime slaw before serving.

If you’re looking for a little something extra, a spoonful of pico de gallo also goes really well with these.

Sometimes a dollop of sour cream and even a few extra cilantro leaves, for garnish.

And there ya have it folks, Beer-Battered Fish Tacos with Cilantro Slaw.

It’s simple. It’s amazing. It’s the fish taco recipe all taco lovers have been waiting for.

Can I Add Seasonings To The Beer Batter To Spice It Up?

I love this batter because it reminds me of the same beer battered fish I like in the classic fish and chips, but stuffed in a taco.

However, this batter may be on the blander side for people who enjoy more seasoned fish in their tacos. Especially since the cilantro lime slaw is an addition of baja style flavor, but not bringing any real heat to the party.

If you enjoy a lot of seasonings in your batter- there are several that would work well!

Season to your heart’s desire!

Is This Recipe Safe For Kids?

While the batter does include beer, this recipe is 100% safe for adults and kids alike.

The alcohol content is cooked off during the frying process, leaving all the flavor without any of the worrisome side effects.

Looking for other spins on a traditional taco? Check these recipes out!

If you’ve tried these BEER BATTERED FISH TACOS WITH CILANTRO LIME SLAW, or any other recipe on the site, let me know in the comment section how it turned out, we love hearing from our readers! You can also follow along with me on PINTEREST, FACEBOOK, and INSTAGRAM to see more amazing recipes and whatever else we’ve got going on! 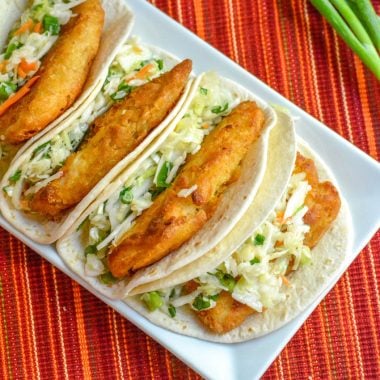 For The Beer Batter

For The Cilantro Lime Coleslaw Salad

To Make The Beer Batter

To Make The Fish

To Make The Cilantro Lime Slaw 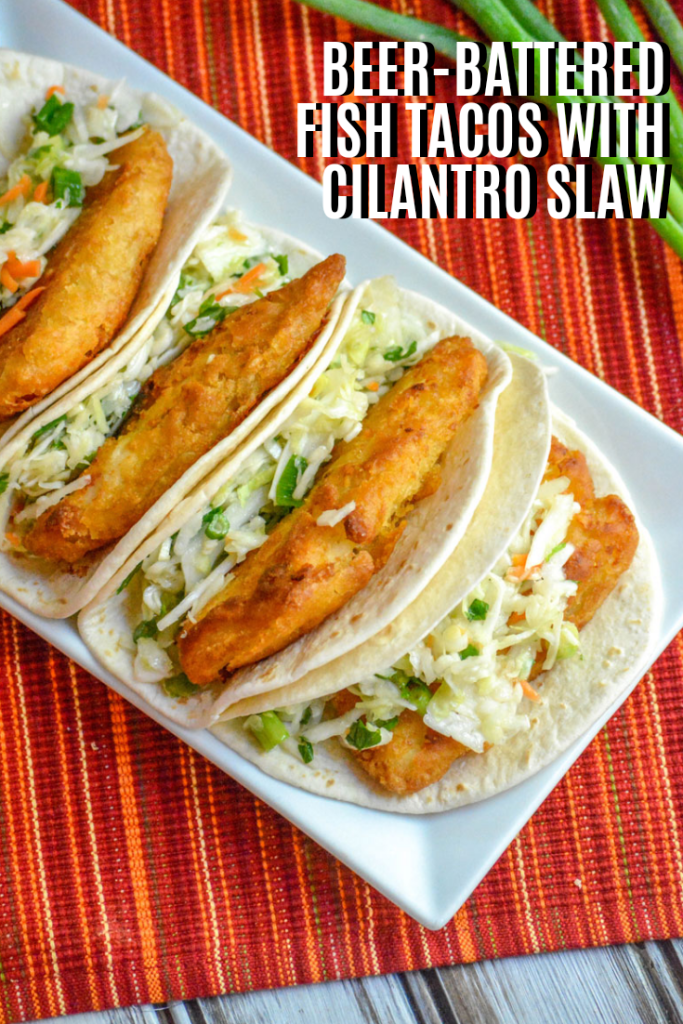