Turn ordinary stuffing mix into the most delicious sausage, apple, and sage dressing ever. This semi homemade stuffing recipe will be a Thanksgiving favorite you’ll want to make anytime of year with all of your chicken dinners. 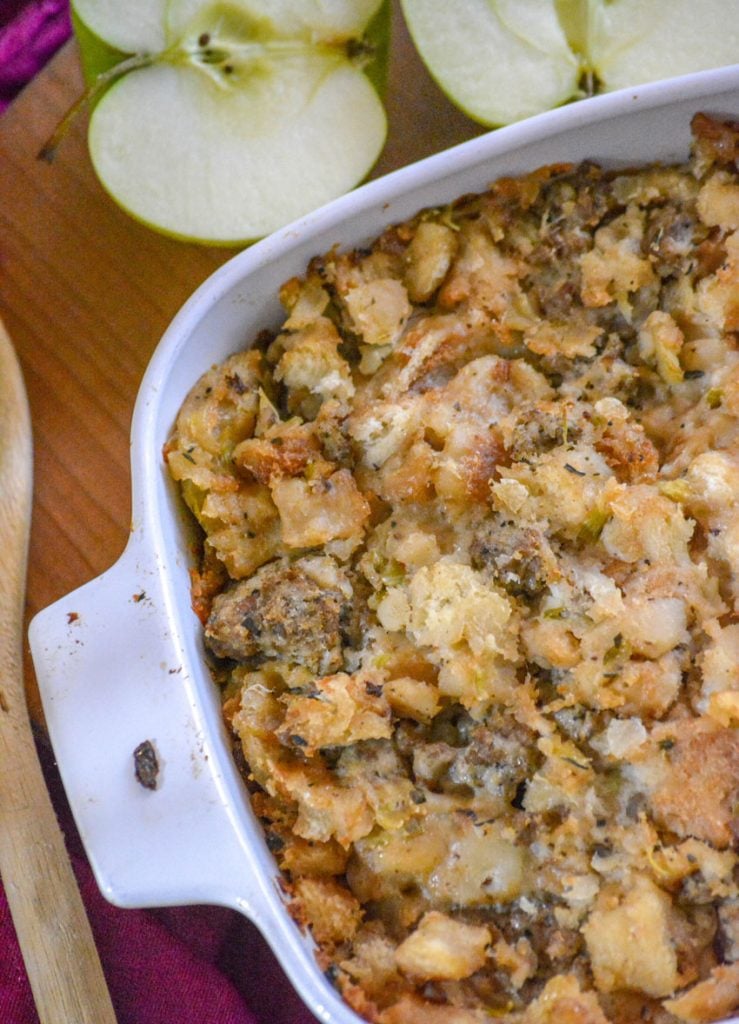 I know everyone gets most excited for the main course during holiday dinners, but I have to let you in on one of my dirty little secrets.

As much as I enjoy a good turkey or roast, for me, the best part of holiday eating is the side dishes. Mashed potatoes, green bean casserole, and of course the stuffing or dressing.

Ok, before we go on we need to settle a little debate about what this sausage, apple, and sage dressing actually is: stuffing or dressing.

The two terms basically mean the same thing though there’s some regionalism to it. For example, if you live in the South, you’re much more likely to say dressing. If you’re in the North, chances are you call it stuffing.

The real difference between stuffing and dressing isn’t where you live though. It’s what you do with the bread mixture.

Technically, stuffing is any combination of ingredients that you ‘stuff’ inside meat or poultry. Dressing is cooked in a separate dish.

Cooked in the bird, or out of the bird- that’s the real difference. And now you know. 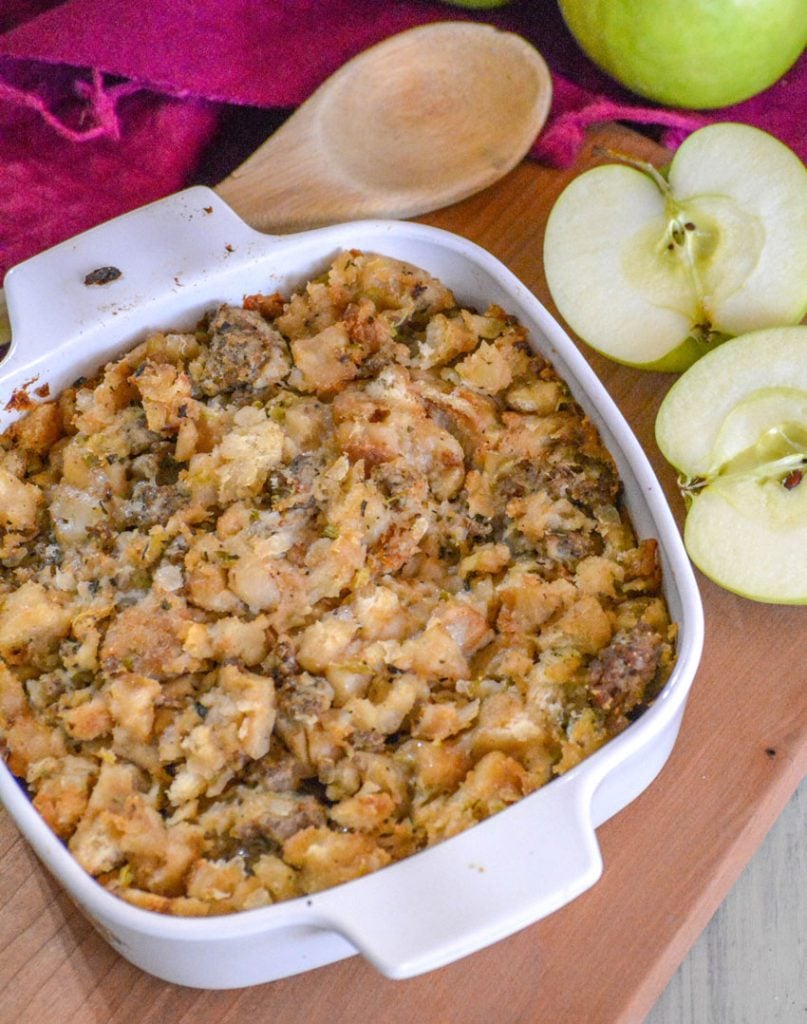 Stuffing Made Easy! How to make sausage apple and sage dressing

Whatever you call it, dressing gets a bad rep for being really involved to make. Well, this sausage, apple, and sage dressing recipe is not complicated at all.

We’re going to use a bag of stuffing mix as the base but dress it up with all these fresh flavors. Using the stuffing mix shortcuts the work of making homemade dressing and makes it quick and easy to get in the oven.

To make this homemade dressing recipe melt two tablespoons of butter in a large skillet. Then use that skillet to the sausage until it’s not pink anymore but not so done it’s dry.

Now you can add the broth and the chopped parsley to the pan. You want the mixture to come to a boil. Then you can pour the veggie broth mix over the stuffing and sausage and stir in your sage.

Now you can let it cool. By cool I mean let it cool significantly, almost completely. This is key for the next step.

Then you’re going to crack the eggs into another mixing bowl and whisk them until they are smooth. Then you can add the beaten eggs to the stuffing and mix until the eggs are evenly incorporated.

To finish, you can transfer the dressing into a buttered 9×9 oven safe dish and bake it at 350 until the top is crisp and the mixture is cooked through. 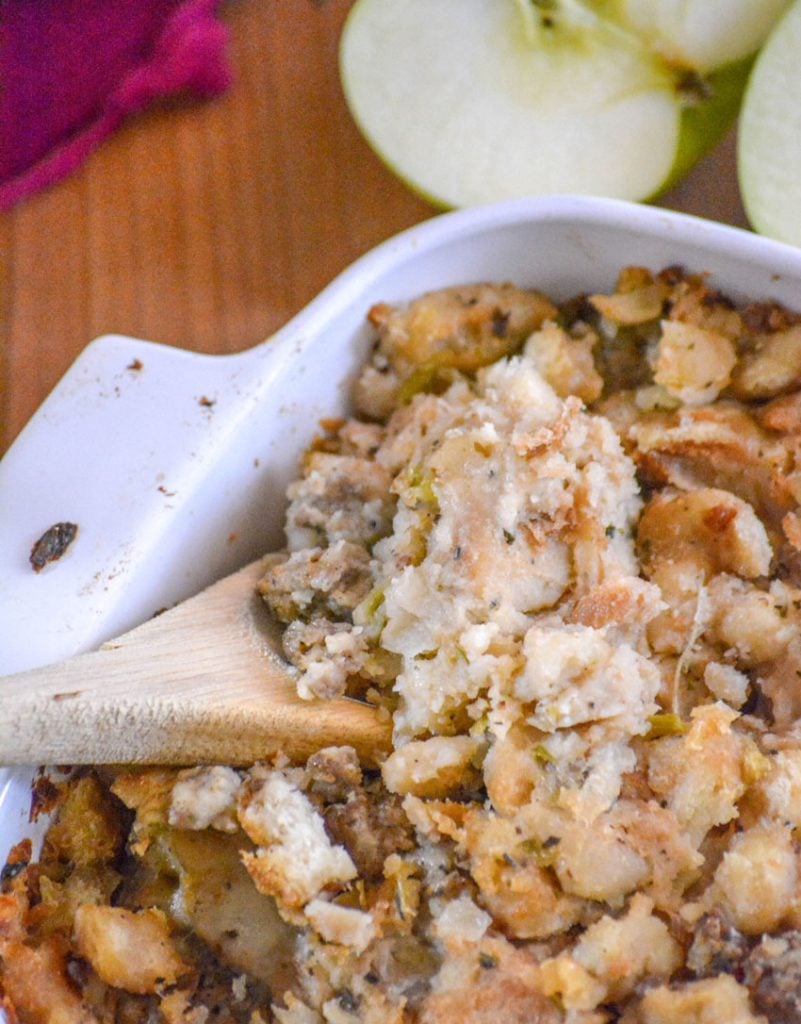 This stuffing recipe is very easy to make, but these tips and tricks will help you nail it for your holiday meal. 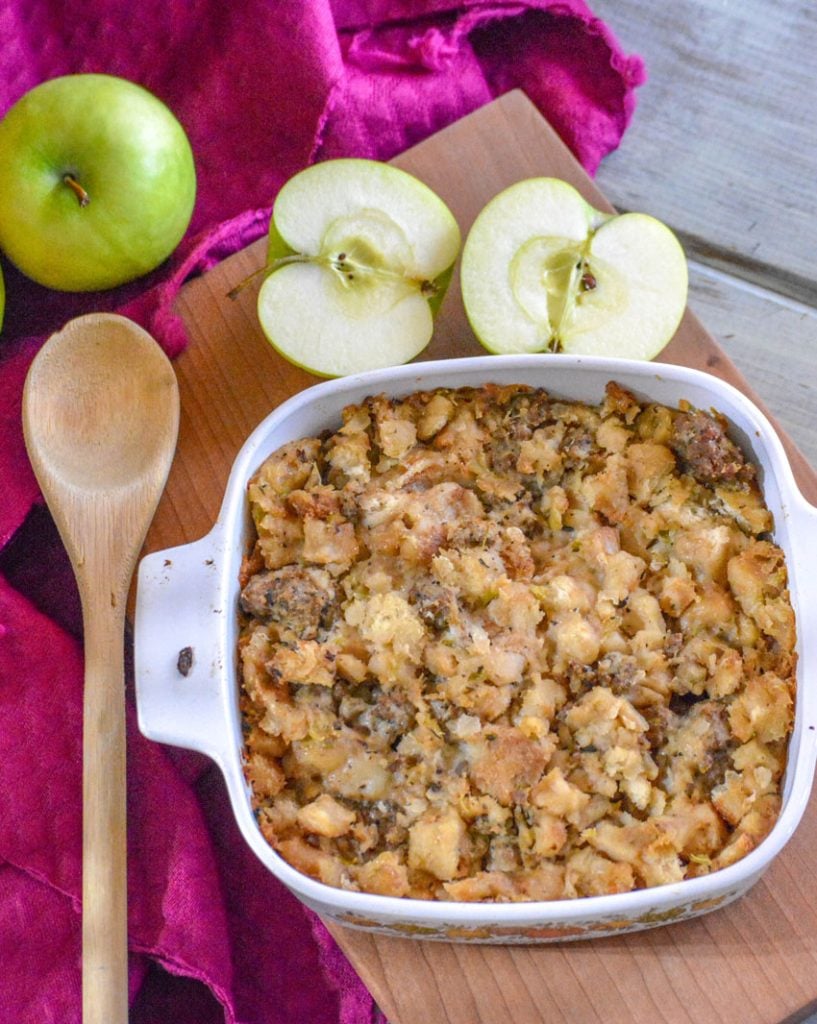 Can This Dressing Be Prepared As Instructed and Stuffed and Baked In The Bird?

While we tend to just prepare & fix it as a dressing, it’s easy to turn this yummy recipe into a more traditional stuffing.

Prepare the mixture as written, but instead of transferring it to a baking dish you can stuff it directly into your ready & waiting chicken or turkey’s cavity.

I try not to overstuff my birds so I don’t affect any of the cooking time. That can mean I have leftovers. Don’t let that go to waste though! Any excess I just transfer to a small, buttered oven safe dish and bake right alongside the bird.

This sausage apple & sage dressing is going to the big hit at your next holiday meal. It’s the one everyone will be raving about, and scrambling for seconds of. They’ll still be talking about it the following year, and eager to know if it’s going to be a part of the spread again.

Worried you won’t have enough to feed all your guests? This recipe easily doubles to serve the needs of a larger crowd. Instead of adding it to a square baking dish, prepare it in a 9×13 inch baking dish instead. 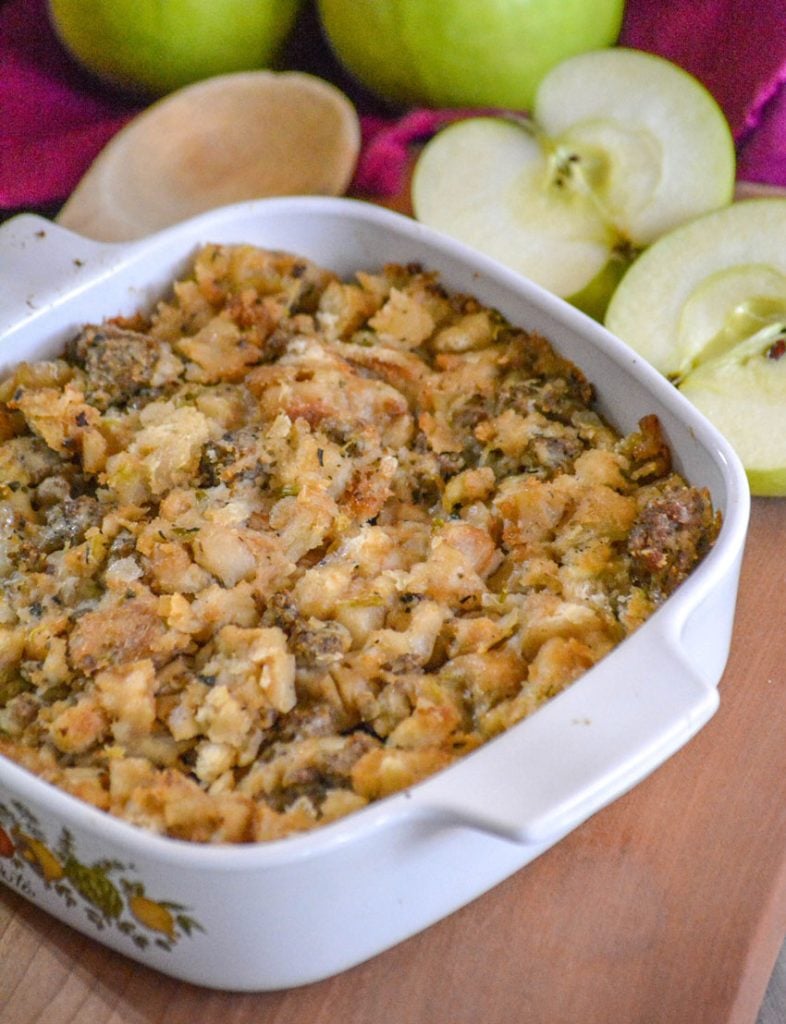 While this sausage, apple, and sage dressing is delicious, you need all the sides on Thanksgiving day.

Consider adding one or two (or more) of these other great dishes to your menu too:

If you’ve tried this SAUSAGE APPLE & SAGE DRESSING, or any other recipe on my site, let me know in the comment section how it turned out, we love hearing from our readers! You can also follow along with me on PINTEREST, FACEBOOK, and INSTAGRAM to see more amazing recipes and whatever else we’ve got going on! 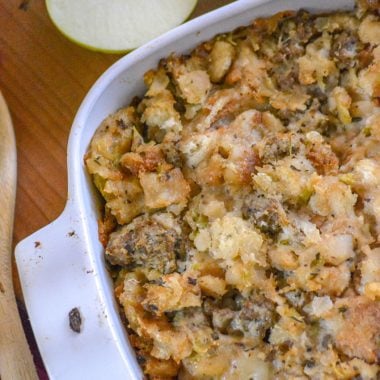 This easy homemade dressing (aka stuffing) recipe is mostly from scratch so it tastes 100 % homemade, but making it almost effortless for the host/ess to throw together. Pork sausage, tart Granny Smith apples, and savory sage meld together for a holiday side dish that will quickly become the new family favorite.
5 from 4 votes
Print Pin Rate
Course: Side, Side Dish
Cuisine: American
Prep Time: 20 minutes
Cook Time: 40 minutes
Total Time: 1 hour
Servings: 10
Calories: 239kcal
Author: Meaghan @ 4 Sons R Us
Prevent your screen from going dark