Not all pies were destined for dessert, and not all pies have a traditional crust. Grandma’s ham & Swiss pie was made for the supper table. Featuring a savory ham, onion, & Swiss cheese filling- it’s a forkful of Heaven in every bite. Great thing it’s easy too, you might need to make more than one! 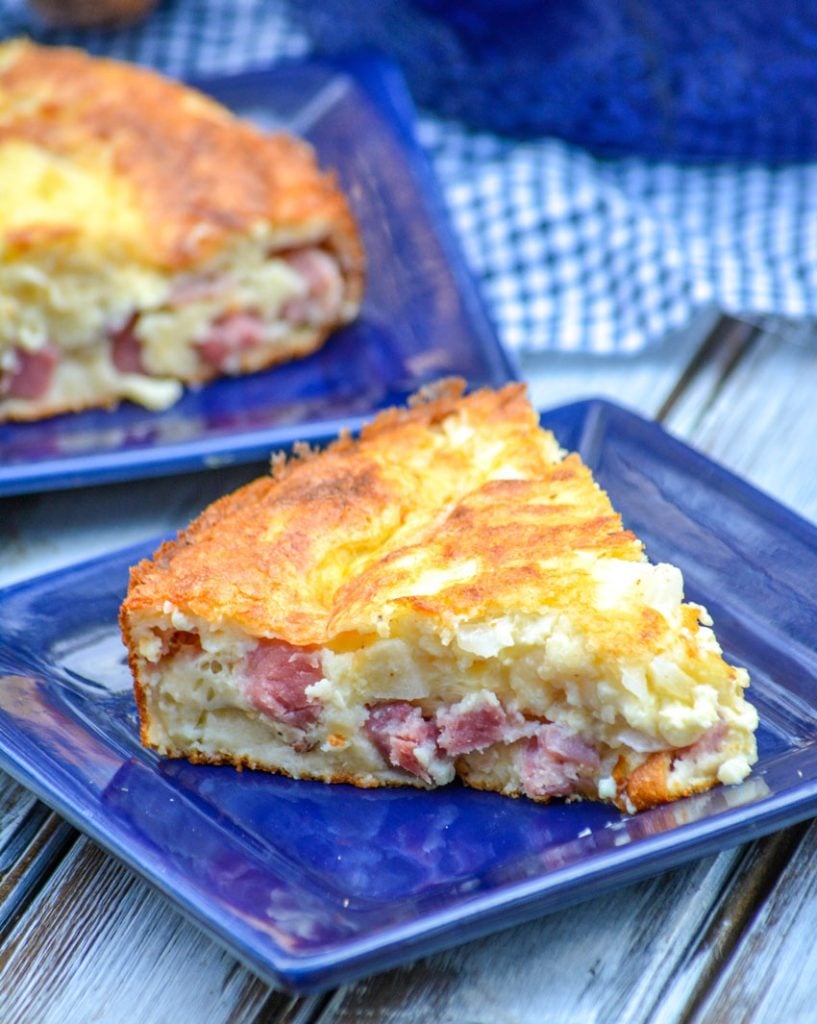 If there was one thing that Grandma did well, it was her pies. She made all kinds of pies.

At 70 years old I still remember finding her in the backyard on a ladder picking fresh bing cherries out of her tree. Whole bowls full.

She always swore they made the best pies. 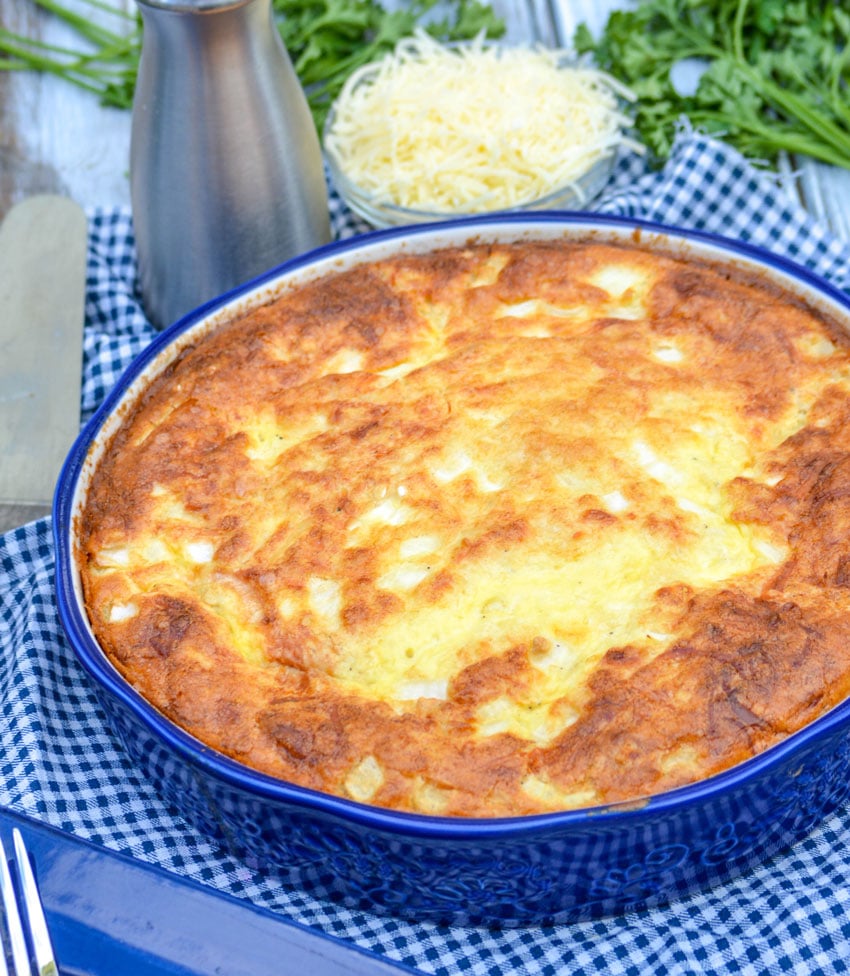 She’d even be out there battling the squirrels over her crab apples. When I was little I didn’t get what was so special about them. I mean they were tiny, tiny little things.

She’s the one who told me they were the only apple that was actually native to our continent. And truth be told, they tasted terrible when picked.

Her crab apple pies were truly a labor of love, but with the work put in on her part they were a real treat. Sadly, her heirloom recipe was lost with her. 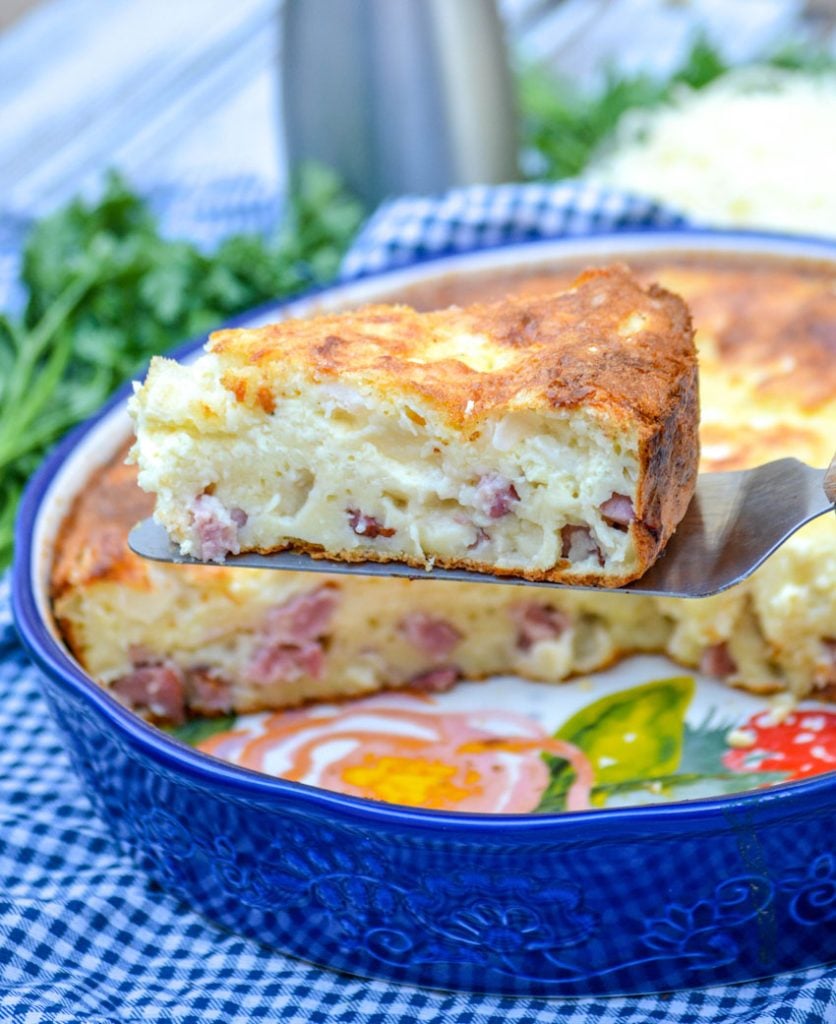 Luckily for us though- she was just as well known for her savory pies. Most of those we were all taught to make too.

She’d had us in the kitchen since we could reach the counters making these dinner pies.

They weren’t your typical pie, and didn’t involve an actual crust. Her secret ingredient was almost always Bisquick, and the ‘crust’ formed naturally while they baked.

It made it the perfect thing for little hands, getting us in the kitchen, and sparking a life long love of cooking. 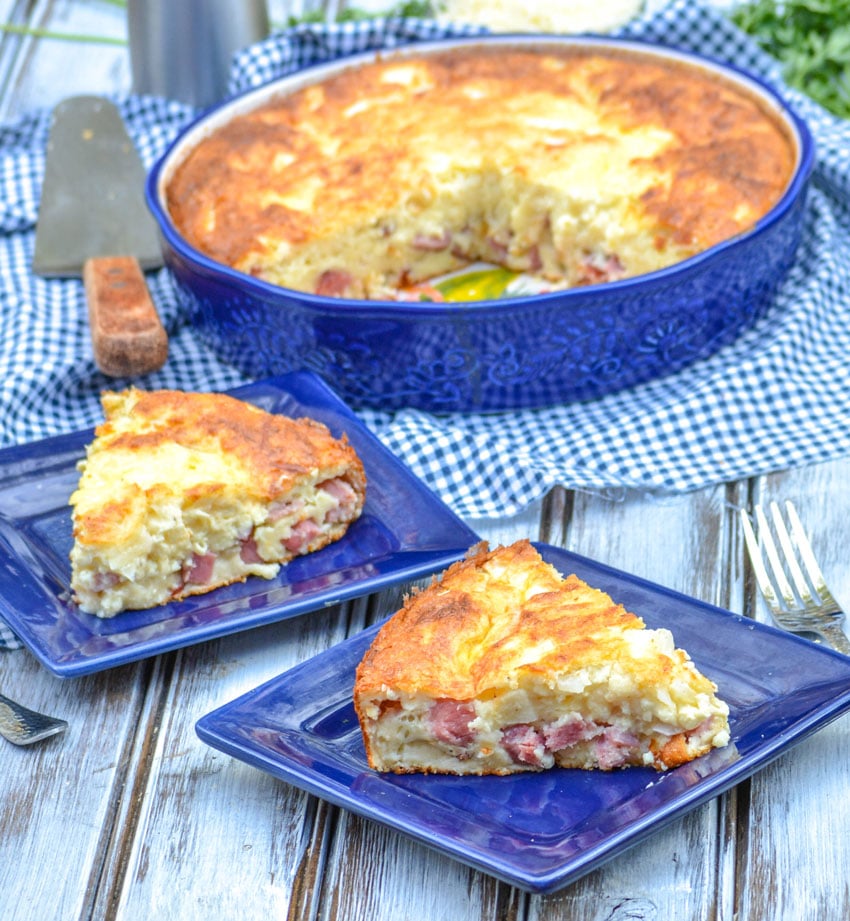 The other thing I love about her Bisquick pies? It makes the fillings easily customizable.

Take her easy cheeseburger pie for example. Just a couple ingredients, and you’ve got a simple one dish meal the whole family will be scrambling for seconds over.

In this version, we added in a heaping helping of chopped ham, rich shredded Swiss cheese, diced onion and some seasonings for good measure. 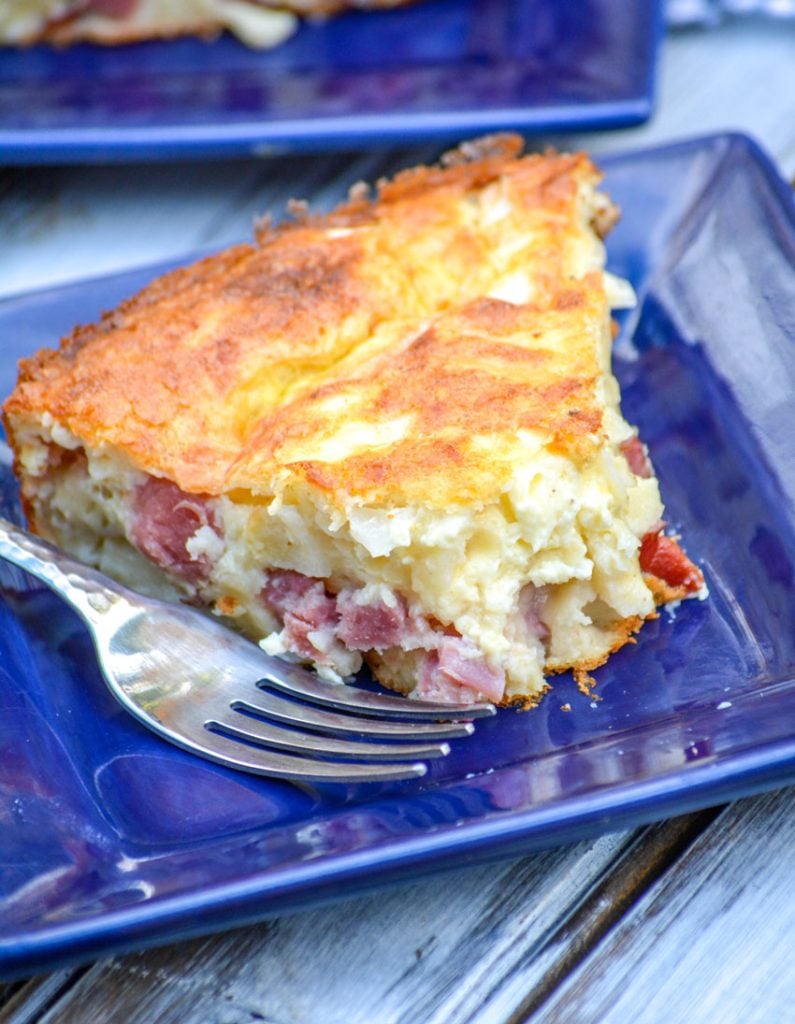 You start by adding chopped ham & diced onion to a deep, greased 9 inch pie plate. There’s no right or wrong to the brand of ham. I love to freeze my Christmas & Easter leftovers to pull out just for recipes like this.

If you don’t have that option though, store bought works just fine. You can purchase it already diced, or buy a nice ham steak and cut it up yourself.

Next, spread shredded Swiss cheese evenly out over the top. This is the one area where I wouldn’t suggest skimping on quality. Better quality cheese has always melted better for me, yielding a better finished product.

Beaten eggs, half & half, Bisquick baking mix, garlic powder, salt, & pepper are all whisked together. The smooth mixture’s then poured out over the ham, onions, & cheese.

Grandma’s Ham & Swiss Pie’s then put in the oven at 400 degrees and baked for 35-40 minutes. You’ll know it’s done when the top’s turned into a golden brown ‘crust’.

Another sure sign is a butter knife, or a tooth pick, inserted into the center of the dish. If you pull it out and it’s clean, the dish is done.

I still recommend letting the dish rest for 5 full minutes before slicing and serving. While it’s technically cooked when pulled out of the oven, the eggs need the extra rest time to finishing setting.

It won’t affect the taste, but it will determine if you’re able to get clean cut ‘presentable’ slices, or not, for serving.

Grandma’s ham & Swiss pie really is quite simple. It only requires a handful of ingredients, and takes almost as few steps to throw together. It’s essentially one of those ‘dump and bake’ style recipes. Perfect for last minute meals and busy evenings!

Other Great Ways To Use Leftover Ham:

If you’ve tried our GRANDMA’S HAM & SWISS PIE, or any other recipe on the site, let me know in the comment section how it turned out, we love hearing from our readers! You can also follow along with me on PINTEREST, FACEBOOK, and INSTAGRAM to see more amazing recipes and whatever else we’ve got going on! 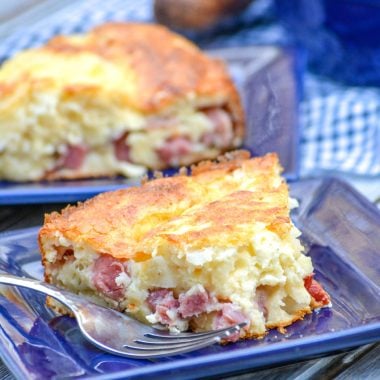