If you love French onion soup, then this French onion soup casserole is the side dish that was meant for you. A bed of beef broth infused caramelized onions is topped with crunchy, buttery croutons with shredded Swiss cheese that’s broiled to golden brown perfection. It’s quick, it’s easy, but it tastes gourmet. 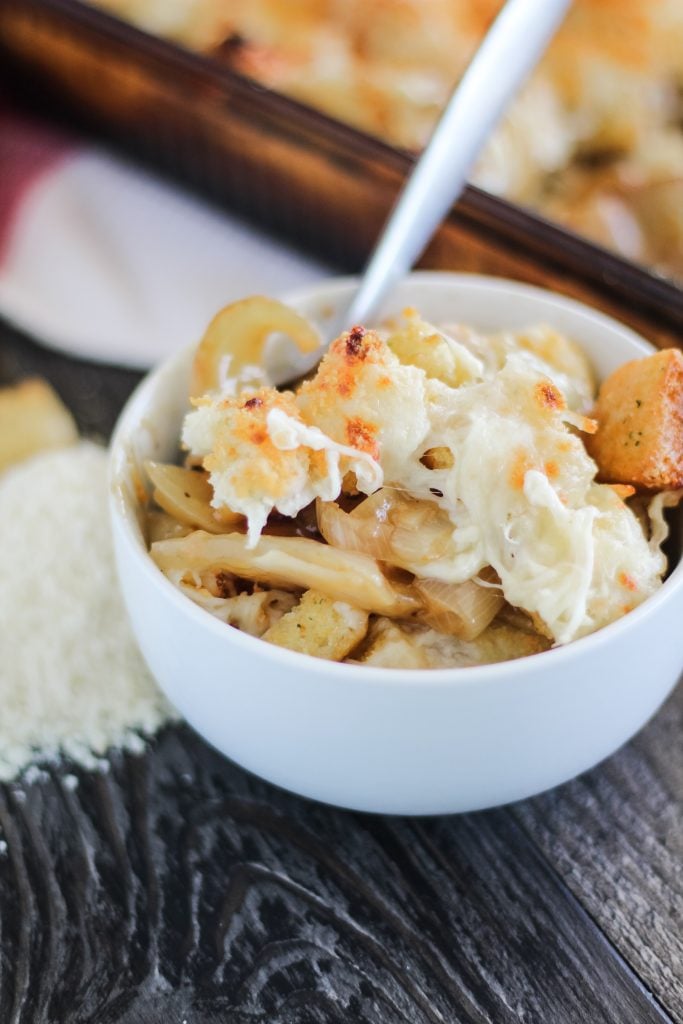 It’s not just any old ‘veggies in a dish with cheese’, anybody can do that.

This one’s a game changer. 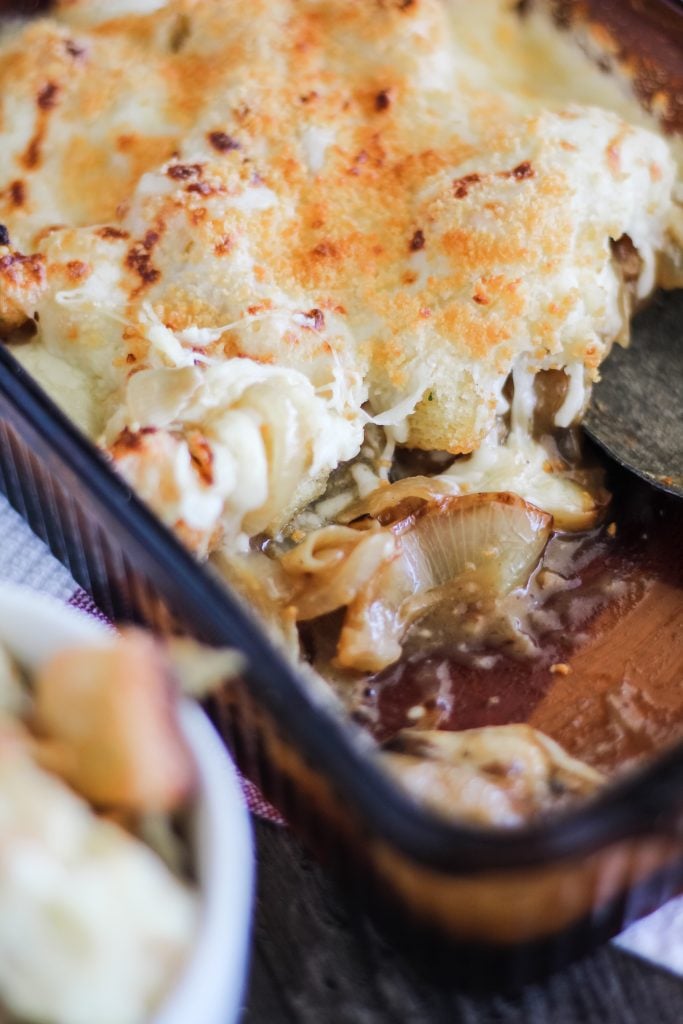 I love a good bowl of French Onion Soup, especially one topped with a sprinkling of croutons and melted Swiss cheese.

But I’ve got a lot on my plate most day, so basically … ain’t nobody got time for that, at least not often.

<Enter this heaven-sent side dish> 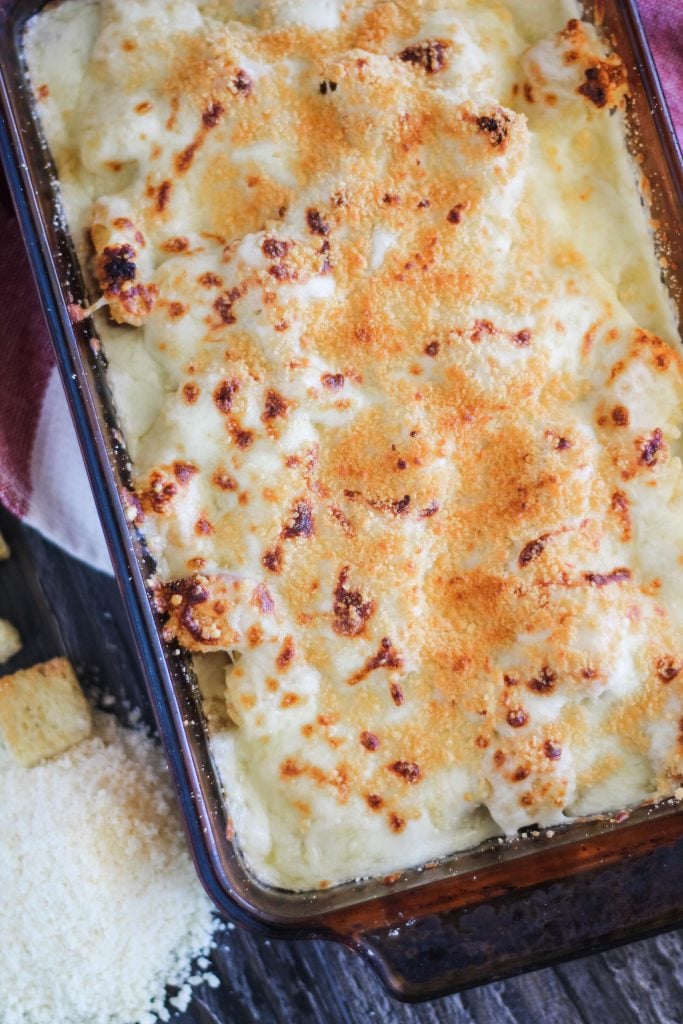 For real though, like the name implies, this tastes just like the iconic soup, but it’s so much easier to make.

Plus, casseroles pair with just about any meat-based entree. So this dish is a great go to, especially during potluck season.

Guarantee that no one else will be bringing this one, meaning you’re sure to stand out!

French onion soup is one of my all time favorites. It’s at the top of my list, and while I know how often I profess my eternal love of soup any time of the year- I don’t always want soup.

Still I still crave that caramelized flavor paired with savory beef based broth and a luscious layer of creamy melted cheese. It’s a magical combination.

It’s also so much easier than you probably ever imagined to transform into a simple side dish. All the flavor, without all the soup-iness.

Both the soup and the side dish start off pretty much the same, caramelizing a copious amount of thinly sliced onions in melted butter.

It only takes about 6-8 minutes, and then you’re ready to go ahead with the rest of the recipe.

At this point we have to make the saucy base, which is somewhere between a roux and a thickened broth.

Flour is whisked in with the caramelized onions until evenly combined. Season it with a little bit of salt & pepper. Just a little bit. Too much of either one, you can’t get that out. But you’ve always got room down the road to taste and decide to add a little more.

Pour in some beef broth and a little bit of sherry, whisking them in until evenly incorporated. This is the base of your French onion sauce.

You don’t have to run to the liquor store for authentic sherry either. Cooking sherry can be found with the cooking wines in your local grocer’s aisles.

Look near the vinegar if you aren’t sure where to find them. They offer all the same flavor without any of the alcohol content. If using the real deal, don’t worry- the alcohol content is safely diluted during the cooking process!

Transfer the onion soup mixture to a casserole dish, scraping the skillet to make sure you get every last drop. Trust me- you don’t want to leave any of this behind in the pan!

In a small mixing bowl, toss croutons with melted butter just until evenly coated. Then spread them evenly out over top of the onion mixture in the casserole dish.

Sprinkle a blend of shredded Swiss & Parmesan cheeses out evenly over top.

Everything in the casserole dish should be piping hot, so there’s not need to actually bake it. Instead place the casserole in the oven under the broiler for a couple minutes, just until the cheese has melted and browned on top.

Remove the French onion soup casserole from the oven, and serve immediately. 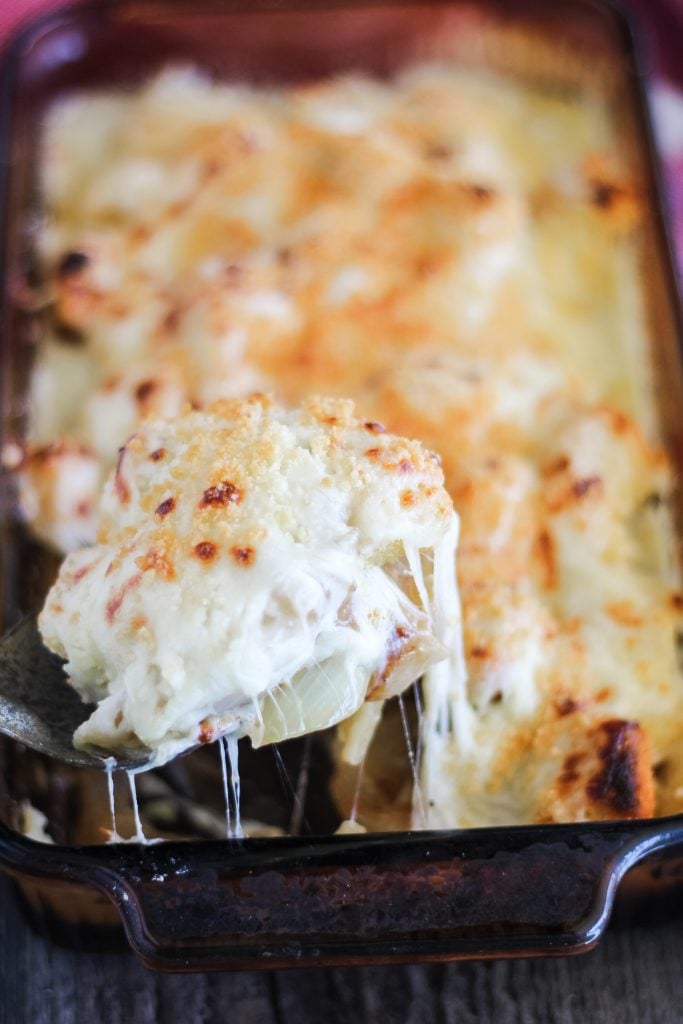 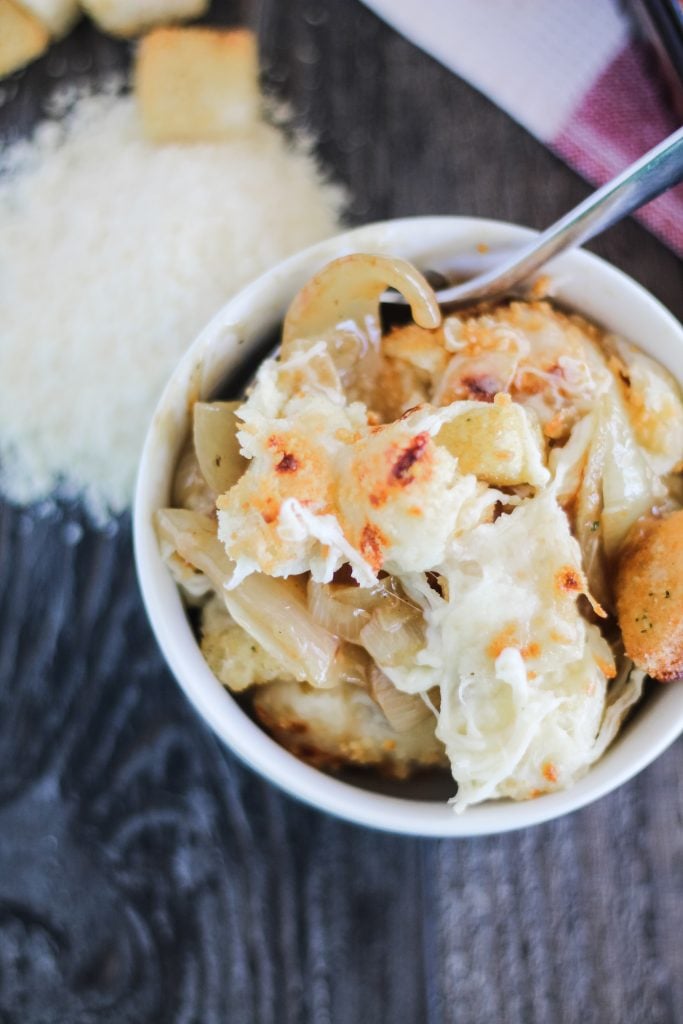 Serve this at your Thanksgiving dinner this year, for a fun new side dish that’s sure to be gobbled up.

If you’re like me, you love alllllll things French onion. Check out these other delicious, savory spins on the classic!

If you’ve tried this FRENCH ONION SOUP CASSEROLE, or any other recipe on my site, let me know in the comment section how it turned out, we love hearing from our readers! You can also follow along with me on PINTEREST, FACEBOOK, and INSTAGRAM to see more amazing recipes and whatever else we’ve got going on! 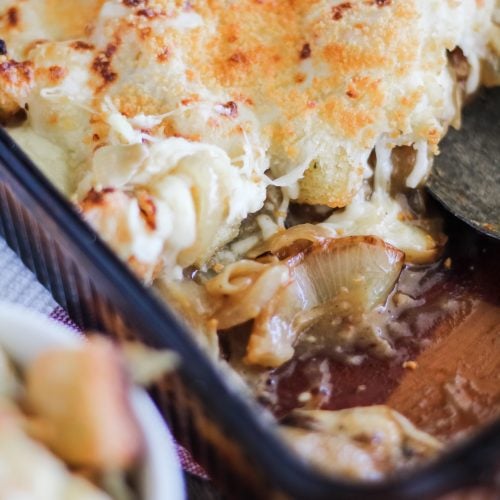 A savory side dish, this one features caramelized onion in a delicious broth with buttery croutons and a layer of creamy melted Swiss cheese on top. It tastes just like your favorite soup, but without all the soup and serve in a casserole dish. It's a gourmet side dish perfect for serving at a holiday meal.
5 from 4 votes
Print Pin Rate
Course: Side Dish
Cuisine: American
Prep Time: 10 minutes
Cook Time: 15 minutes
Total Time: 25 minutes
Servings: 6
Calories: 254kcal
Author: Meaghan @ 4 Sons R Us