This silky sweet Nutella cheesecake is sandwiched in between a crispy, crunchy hazelnut crust and a rich layer of Ferrero Rocher-style ganache. This Ferrero Rocher Nutella Cheesecake is a confectionery miracle. 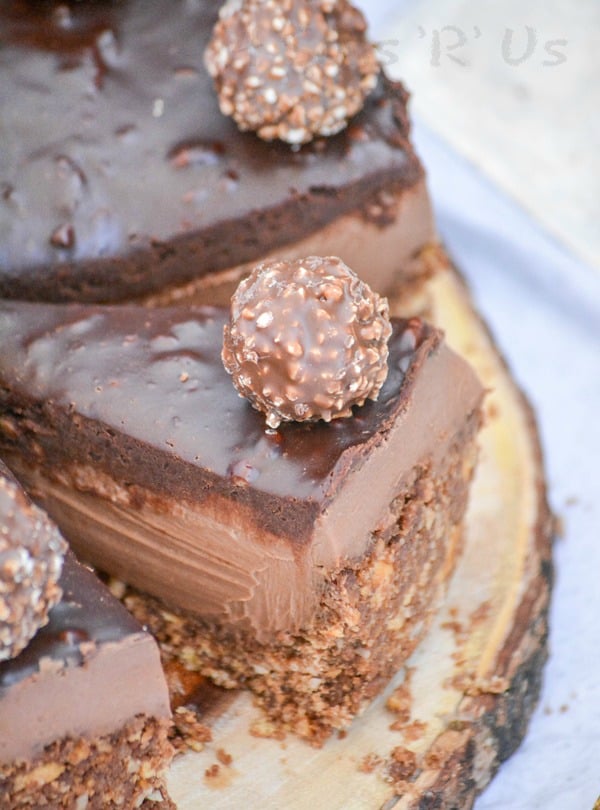 Every year, for every birthday the birthday boy gets to pick whatever he’d like for his special dinner. For dessert? A cake of their choosing. 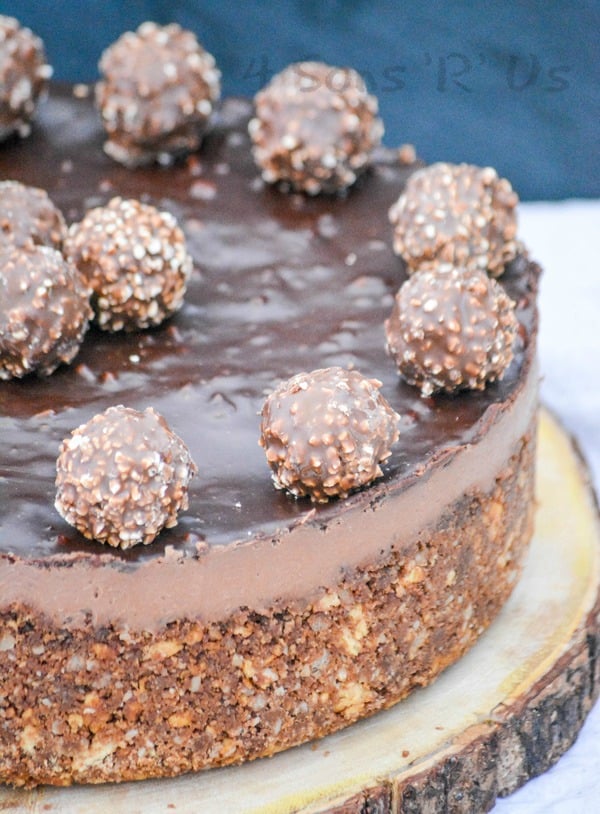 Once my kids reach a certain age, usually somewhere around 12-14, they begin craving and asking for the same thing year after year. For our oldest it was our family recipe for Sausage, Scallions, and Farfalle. For Son # 3 it’s my Crockpot Lasagna.

My second son wants a classic Philly cheese steak. Except he wants his on a foot long sub bun. Hey, the only rule is it has to be something I can make at home. So while the rest of us get regular sized hoagies– he chows down on an extra large, 12″ sub sandwich. 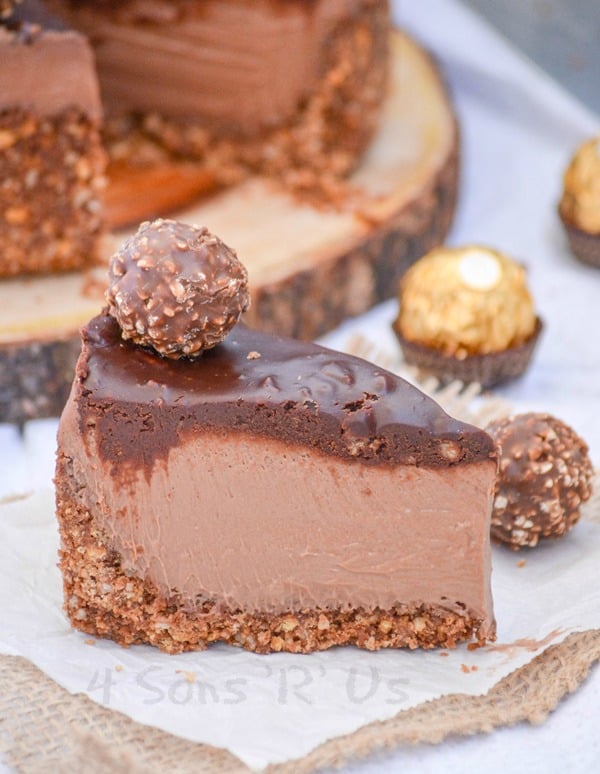 And as far as birthday dinners go, it’s pretty easy. Pair it with some baked french fries, and a simple side salad– and it’s a simple meal, that’s also exactly what he wanted.

The kids used to come up with really creative designs I could adapt, and it was fun. With age has come the early onset of mental laziness, and a total lack of creative input. Instead, now I get a ‘whatever you think I’ll like Mom, even when I’m not sure about whatever you’re whipping up– I always end up loving it.’

While I love the creative license, I do miss the days of collaboration. It was just so much fun. Either way though, the birthday cake tradition started by my grandma will live on. And on, and on, and on if I have my way. 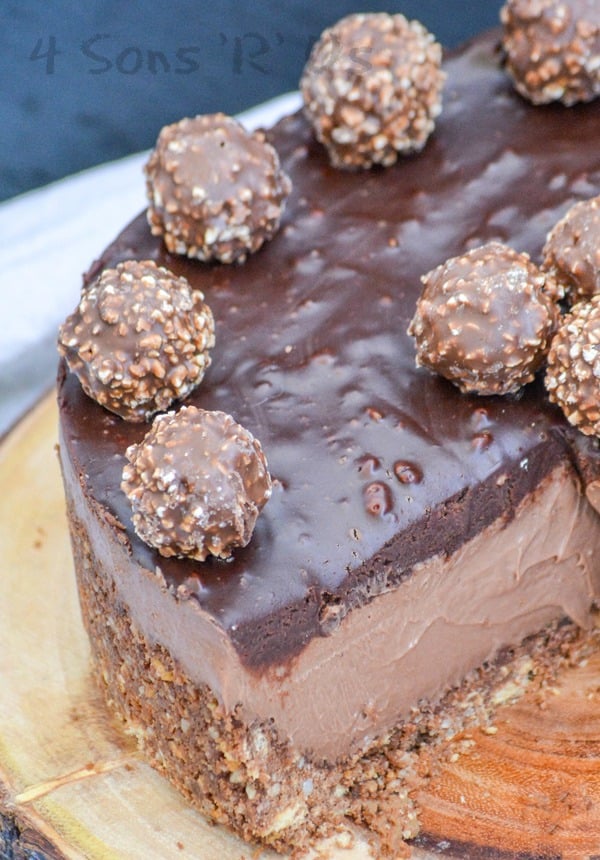 By the time I was done with this year’s ‘cake’, I was thanking my lucky stars that the dinner I still had to prepare was so easy.

The birthday boy loves loves loves Ferrero Rocher candy. I know, I know– he has expensive taste. He’s learned to shop the post-holiday candy aisle though to stock up. Smart boy, Mama’s taught you well. Super proud of his frugality.

This particular son also inherited his Daddy’s craaaazy sweet tooth. It’s bad y’all. By bad, I meant that I have to hide sweets meant for recipe development because they can sniff them out, even hidden, in the pantry like bloodhounds. 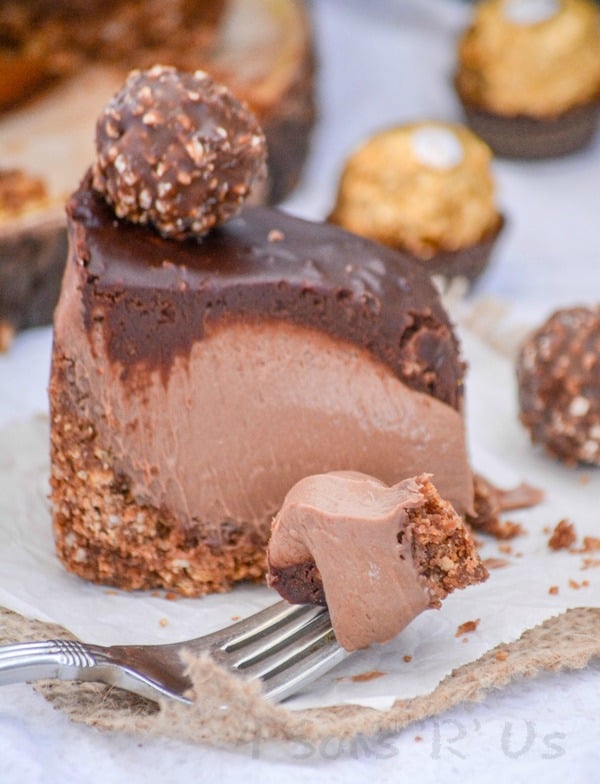 Of course, I took all this into consideration before deciding on his birthday ‘cake’. Cheesecake is also his latest love since discovering it in his culinary classes. It wasn’t a stretch for me to turn all that into a truly ‘wow’ dessert for his big day.

The end result? This epic Ferrero Rocher Nutella Cheesecake. It’s a dream come true in the form of an edible, truly delectable dessert. 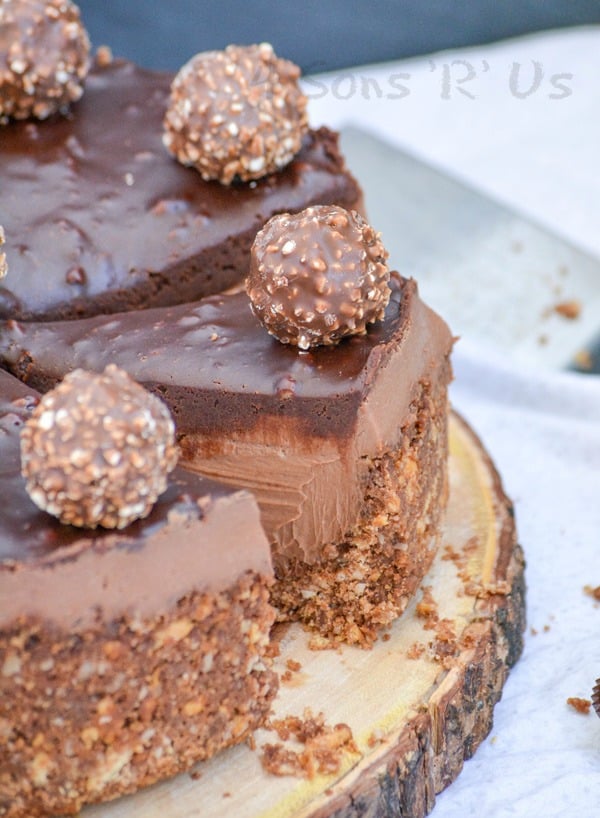 A crispy, crunchy cheesecake crust featuring freshly roasted hazelnuts and actual rice crispies, your mouth will think it’s eating the crunchies right out of your favorite candy. Filled with a silky smooth, rich cheesecake flavored with Nutella and melted chocolate– it’s topped with a chocolate ganache that’s studded with crispies, again just like the famed Ferrero Rocher. Every bite is pure indulgent, edible heaven by the forkful.

This Ferrero Rocher Nutella Cheesecake is the perfect dessert to celebrate someone. Shoot, it’s good enough to celebrate anything. I might even have to invent a holiday or something, so I have a guilt-free excuse to have more of this in my life. 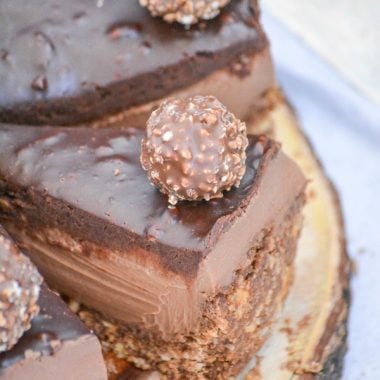 For The Cheesecake Filling

To Make The Cheesecake Filling

To Make The Ganache

If you have raw hazelnuts, spread them out in a single layer on a baking sheet. Roast them in the oven at 350 degrees for 10-15 minutes. Transfer the hot nuts to a kitchen hand towel and wrap them up, sealing in the steam. Leave them for 1 minute to steam. Roll the nuts around roughly in the towel to remove the skins. Let them cool completely before using.
Did you make this recipe?Share it on Instagram @4sonsrus or tag #4sonsrus!