Half the work, but chock full of all the same great flavor these chicken cordon bleu pinwheels are a fun new spin on the classic dish. Golden brown, buttery crescent roll dough rises around pinwheeled layers of savory chicken, sweet ham, and tangy melted Swiss cheese. These handheld treats are a great appetizer for guests, but easily double as a quick meal for busy nights. 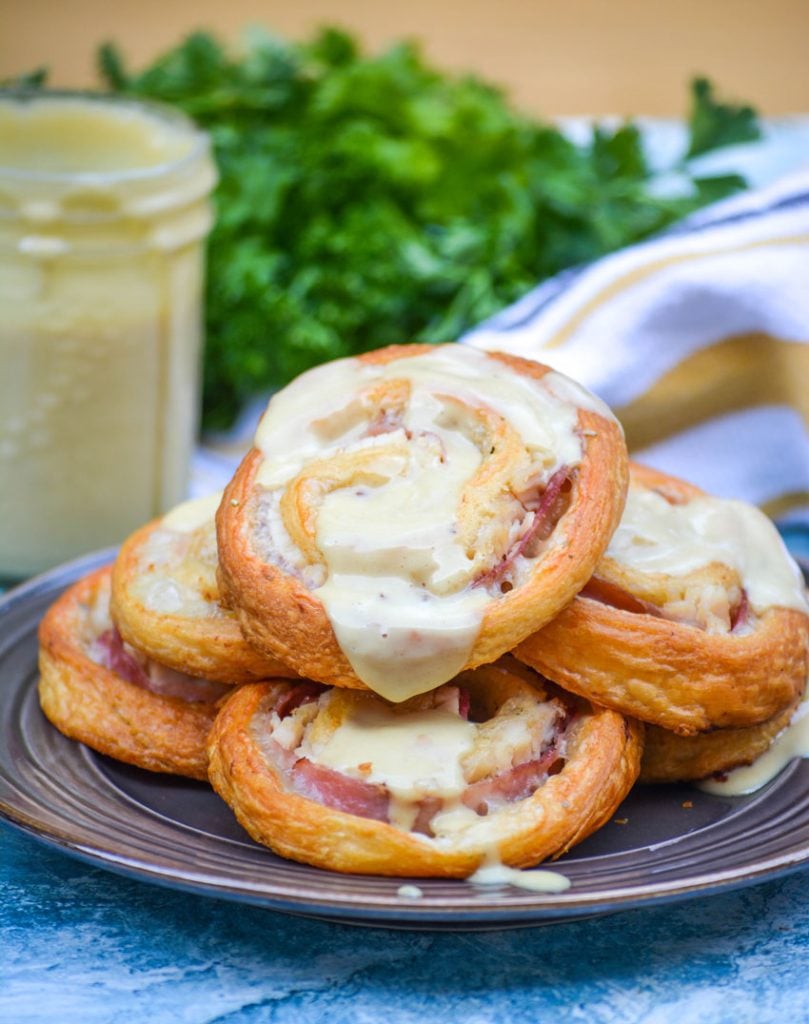 That’s always a winning combination for me, because those are three things I’m almost always guaranteed to have on hand.

But what exactly is Chicken Cordon Bleu?

It’s believe to have actually originated in Switzerland, making it ‘Swiss’- despite it’s name of French origin. It was a ‘schnitzel’, or breaded chicken cutlet, stuffed with cheese. Not sure when the ham got added into the mix, but it was a genius addition to the Swiss cheese & savory chicken.

The name actually has a pretty cool story too. In France the term ‘cordon bleu’ referred to wide blue ribbons bestowed upon the highest level of knighthood. The term eventually became synonymous with food cooked to the highest quality & perfection. Many think it’s because the wide ribbons of a cook’s traditional apron resembled the knight’s sashes. 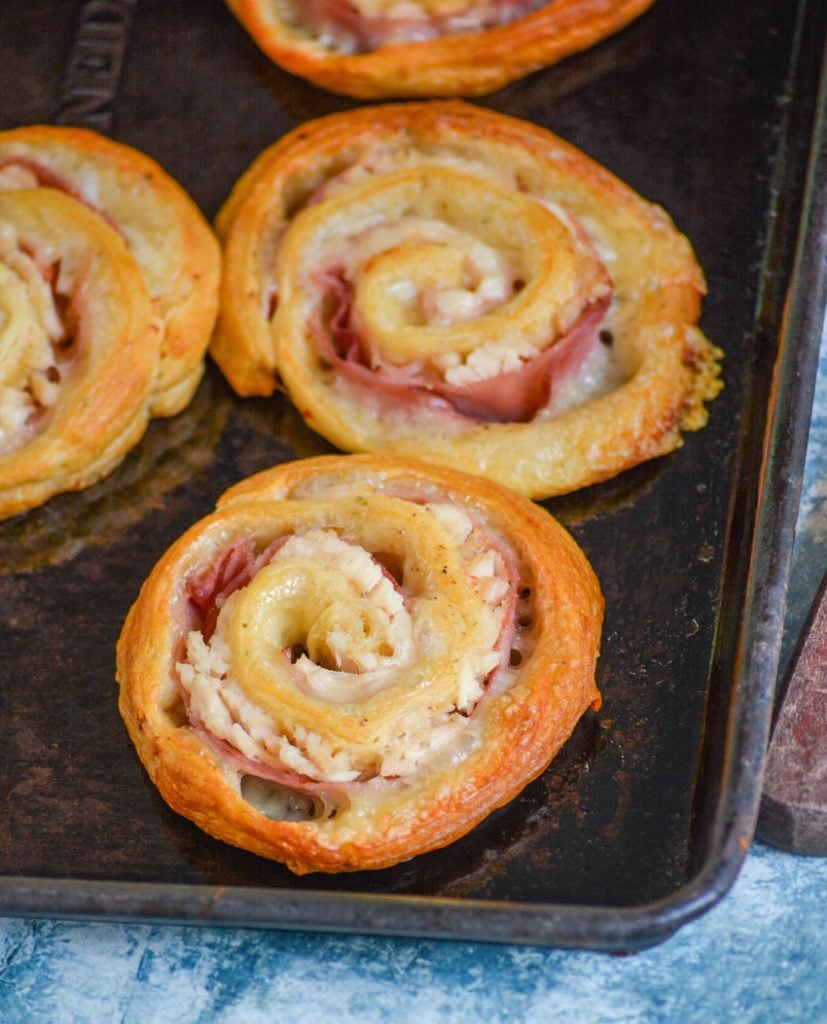 I wouldn’t say making a cordon blue is too much work, but it’s too much work for my average weeknight. Kids, busy schedules, running a business, you know- life & all.

Which meant it was just the thing I couldn’t live without, who can live without meat & cheese?? But it was something I was excited to adapt to fit my needs, even on busy nights.

One night, as with so many others, I looked into the abyss of my stocked fridge and was at a loss. Even the deep freezer didn’t offer any real inspiration. Dinner had to be served though, and that’s when I called in reinforcements. It was that or scream, or cry out of sheer frustration.

I cook for a living. Why was coming up with a simple meal idea so hard?! 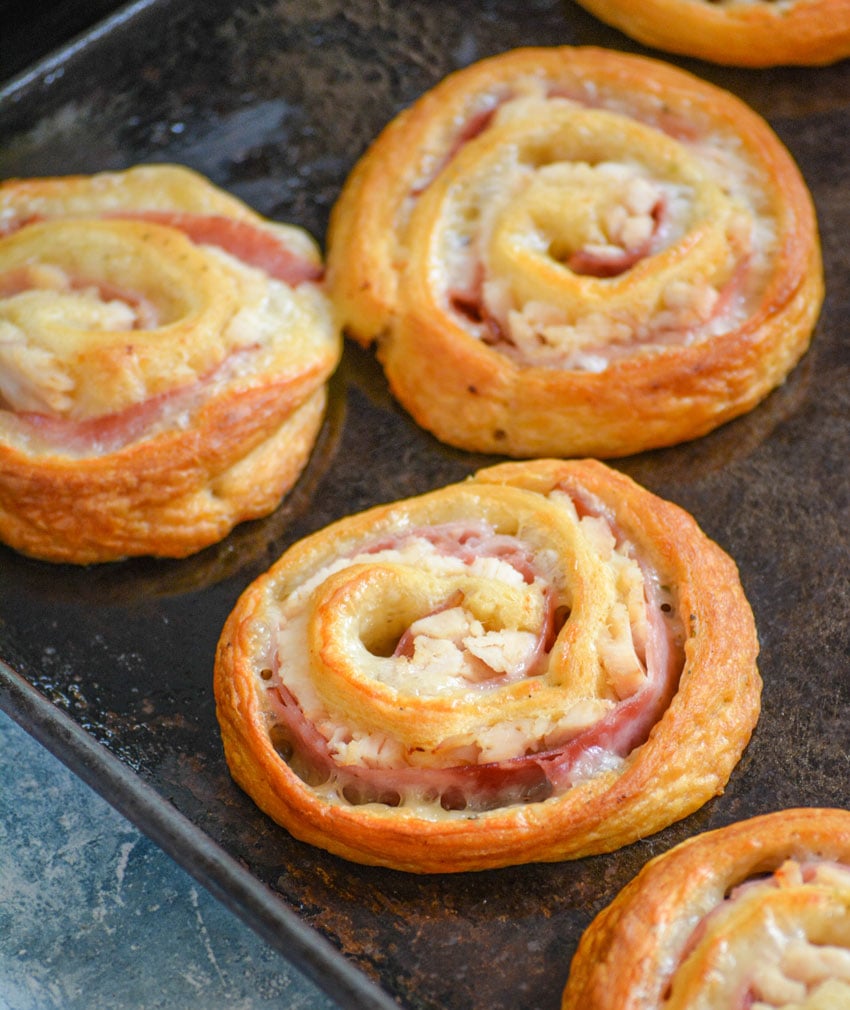 That’s when the Hubs came in, and started pulling things out. He came up with some lunch meat that needed to be used. A tupper ware holding the last breast pulled from a $5 Costco rotisserie chicken. A handful of slices of Swiss cheese. And finally, a can of crescent roll dough that had been hiding in the very back of the overflow fridge. It must’ve been leftover from the last Holiday.

Ok, both our wheels were turning and we were on the same train. Chicken cordon bleu something. I initially was thinking some sort of pizza or hand pies, but the Hubs (Ever my saving grace in the sanity dept) suggested I go even simpler.

How Do You Make A Chicken Cordon Bleu Style Pinwheel?

It all starts with a can of crescent roll dough. Pop the seam, and remove the dough from the tube. Working on a flat surface, I suggest a large clean counter top, unroll the dough into a rectangle. Pinch & press all the seams together to seal and close them. Carefully transfer the dough to a large cutting board.

Sprinkle the dough lightly with Italian seasoning. You can omit this step if it’s not to your liking, but we enjoy the little extra bit of flavor it gives.

Once the dough’s had several minutes to chill, take it out. Remove the cloth, and pick an end to start with. I recommend one of the longer ends. Roll the dough up like a cinnamon/jelly roll, end to end. Keep it tight, but not too tight that you squeeze any ingredients out of the ends. Gently press the last line of dough in to secure.

Using a sharp paring knife, cut the dough into roughly 1/2 inch slices making 8-10 rolls. Transfer the cut chicken cordon bleu pinwheels to a baking tray sprayed with non stick cooking spray. Make sure to place them with enough room to spread out. They won’t get huge, but they will stretch a bit as they cook.

Bake the pinwheels at 375 degrees for 18-20 minutes, or until golden brown and puffed. Remove them from the oven, and allow them to cool to the touch before using a spatula to release them from the pan. 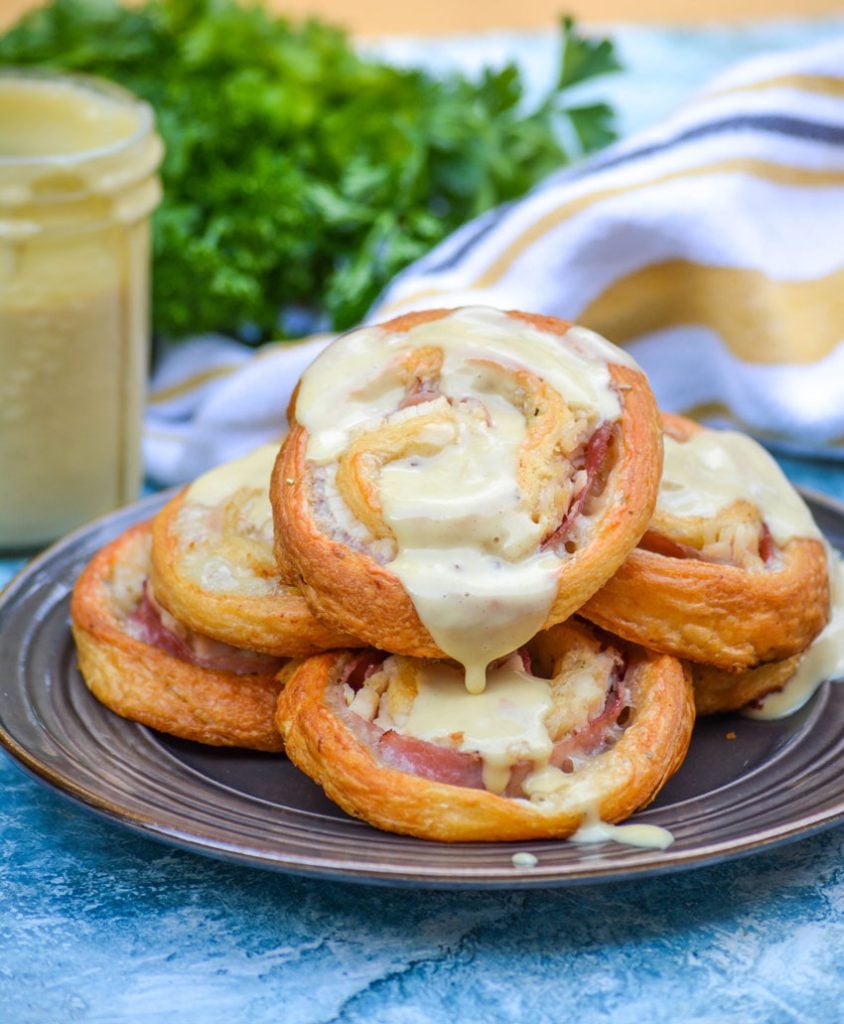 What should I serve with these chicken pinwheels?

We love to serve these as a snack or an appetizer on game days, and at get togethers. To turn them into a lighter meal option, I suggest a simple side salad. Light, refreshing, and filling and still an all around really easy meal.

I’m a sauce person. Not necessarily ketchup, although two out of the four sons would literally put ketchup on their ketchup. But just about everything can be enhanced when paired with a good sauce, at least in my book.

This chicken cordon bleu pinwheels are no exception. They’re good all by themselves, but paired with a bit of honey mustard for dipping? Well then they go from good to great! The kind of honey mustard doesn’t really matter. If you’re a fan of the sauce you probably have your favorite brand on hand, and that will work just fine.

If it’s not something you keep on hand, or you just happen to be out & really need some to pair with this- well I’m here to show you just how easy it is to whip up in seconds, from scratch!

How do I make a homemade honey mustard sauce?

These are even easier than our traditional version, and taste superb. They’re perfect party food and make a really pretty presentation. A drizzle of honey mustard gives these chicken pinwheels that perfect bit of extra mmph.

So the real question, is how easy is it to throw a good honey mustard sauce together from scratch quickly- honestly. We keep it simple with only two ingredients, exactly as the name implies.

Yep, that’s right. To whip up this sweet yet savory sauce you only need honey and some mustard. Not just any mustard though, it needs to be the tangy wine-based Dijon variety.

Add both ingredients to a small bowl, and whisk the two together until evenly incorporated. That’s it. Serve the sauce with the pinwheels for dipping, or drizzle it over top of them for a prettier plate. However you serve it, both ways are equally delicious! 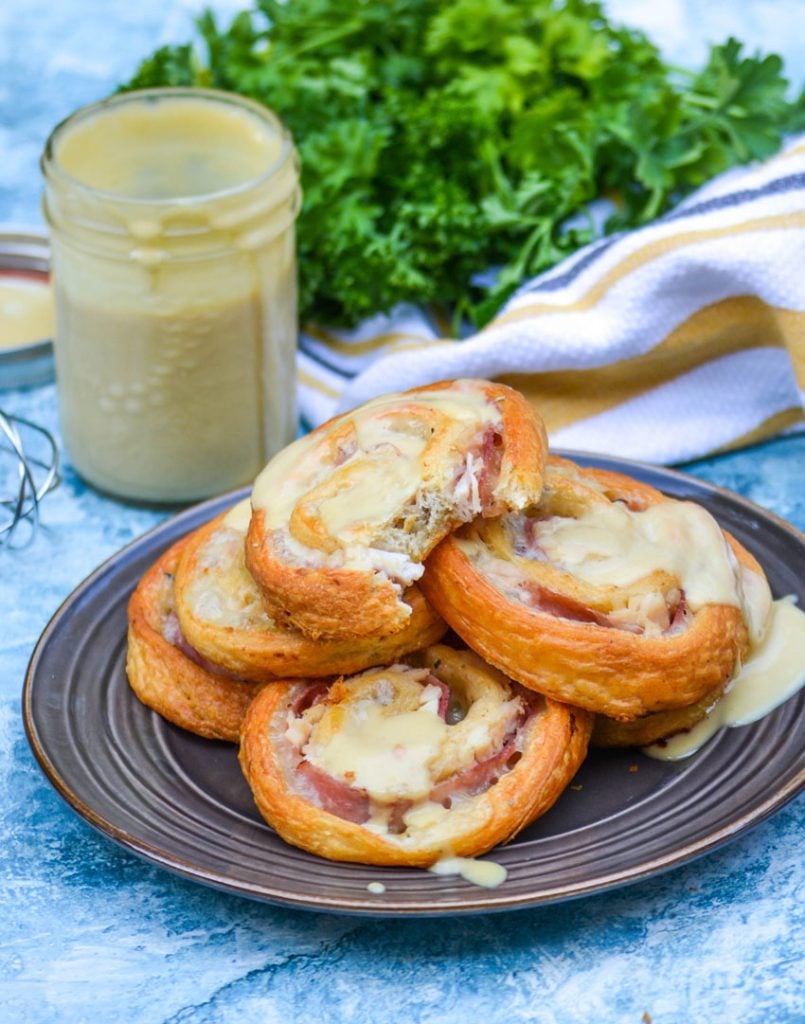 With or without the sauce, these pinwheels are perfect finger food fit for a crowd but easy enough to serve for a simple supper.

If you’ve tried these CHICKEN CORDON BLEU PINWHEELS, or any other recipe on my site, let me know in the comment section how it turned out, we love hearing from our readers! You can also follow along with me on PINTEREST, FACEBOOK, and INSTAGRAM to see more amazing recipes and whatever else we’ve got going on! 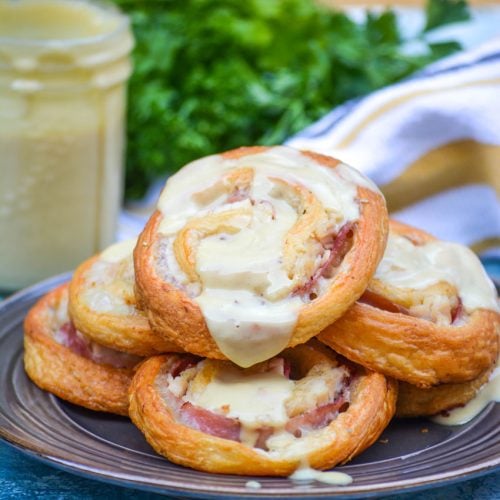 recipe adapted from Mom On Timeout