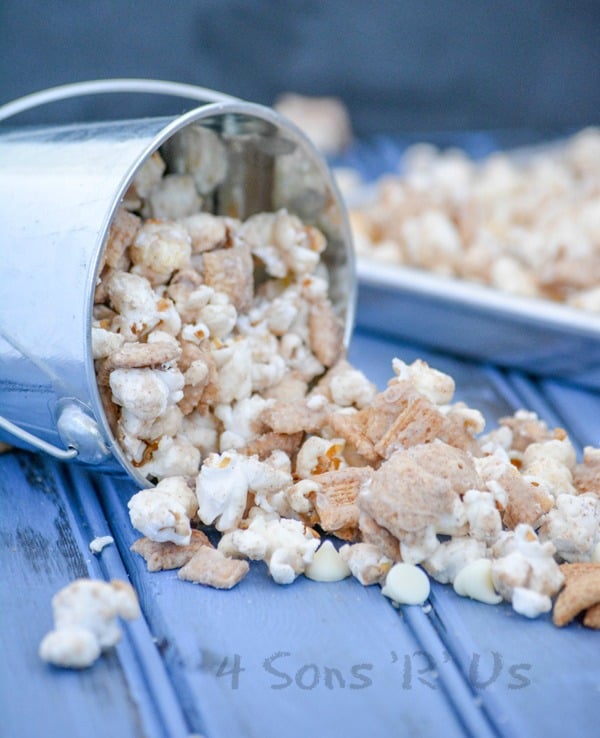 END_OF_DOCUMENT_TOKEN_TO_BE_REPLACED

There’s nothing quite like the sweet & salty crunch of old fashioned kettle corn. This homemade kettle corn recipe is quick & easy to whip up in minutes at home, and tastes just like the kind you fell in love with as a kid from your State or County Fair.

END_OF_DOCUMENT_TOKEN_TO_BE_REPLACED

By popcorn experiment # 4, the sons and I had had enough spicy seasonings and were ready to venture back into sweeter waters. Obviously, ‘cinnamon roll’ popcorn was a must-try. The smells coming from my stopve-top and oven were incredible. With that first mouth-watering bite we discovered the finished product didn’t disappoint. It actually tasted like a cinnamon roll (but with crunch!). Who knew?! In fact, it was soooo good, that we bagged a second batch up and gave it out to family & friends as late Christmas gifts.

Sorry for my lack of picture planning. My camera battery died before I could nap a picture of the drizzled white chocolate topping. This second batch didn’t stick around long enough for me to get one afterwards either. Little popcorn monsters!

Seriously though, this is the next big thing (at least in the popcorn world).  It is completely amazing: buttery, crunchy, caramel popcorn with a burst of cinnamon and a drizzle of white chocolate.

1. Preheat the oven to 250 degrees. Grease two large rimmed baking sheets and set aside.
2. Place the popcorn in a really large bowl (or two separate large bowls if you don’t have an extra big one).
3. In a large saucepan over medium heat, melt the butter. When melted add the brown sugar, corn syrup, and cinnamon. Bring to a boil while stirring. Once the mixture starts boiling, reduce the heat to medium-low and simmer, stirring often, for 3 minutes. The mixture will be slightly thickened. Take the pot off the heat and stir in the vanilla and baking soda. The mixture will bubble so be careful.
4. Pour the caramel over the popcorn and mix until the popcorn is evenly coated.
5. Turn the popcorn out onto the baking sheets, spreading into an even layer on each sheet. Bake the popcorn for one hour*, stirring and tossing every 20 minutes. Move the bottom tray to the upper rack and vice versa each time you stir. The popcorn will deepen in color and harden a bit as the caramel bakes and sets.
6. When the popcorn comes out of the oven, scrape it onto an even layer of parchment or wax paper.
7. Drizzle the white chocolate over the top (using the tines of a fork to drizzle it across or pour the melted chocolate into a freezer quart-size ziploc bag and snip a corner to drizzle).
8. Let the popcorn sit until white chocolate is set, 30 minutes or so. Break into pieces. Try not to eat the entire batch. I’m not kidding.

* If you like a bit of chewiness to your toffee-like popcorn, bake it for 40 minutes instead of the full hour.

Calling all popcorn lovers! If you, or someone you know, loves the crunchy little snack you’ve got to check out this easy seasoning recipe. This gem was popcorn experiment # 3. And might I say, it was well worth the wait. It does have a nice kick to it, but lessen the Cajun seasoning to create a more mild version. Make a batch, grab a bowl, and dig in while you enjoy some qt with the family.  A handful of popcorn can make any thing more memorable.

recipe adapted from Taste of Home

1. Pop popcorn according to package directions, and transfer to a large bowl.
2. Combine the melted butter with either the lemon or lime juice. Slowly pour them evenly over the popcorn and then stir to completely coat.
3. Combine the Cajun seasoning and grated cheese. Sprinkle them evenly over the popcorn and again, give it a good stir to completely coat.
4. Enjoy!

What is it about the combination of pb & j that kids loved so much. Seriously? I remember eating peanut butter & jelly sandwiches every chance I got as as kid. Any meal, any time. I didn’t care. I’m pretty sure I o.d.ed  on it I ate it so much. As an adult the thought of eating it makes me feel slightly ill. Yep, definitely o.d.ed on the two as a kid. Thankfully, my own kids seem to have managed to avoid the same fate. They beg for the stuff. I’ve caught all of them at least once, ok maybe twice, hiding in the pantry and eating peanut butter by the spoonful out of the jar. They love it on celery sticks. Apple slices? You bet! Even tortillas. My crazy kids use peanut butter like it’s a condiment.

With that in mind, we decided to get creative with our next popcorn experiment. I hit the web and found this simple, but totally awesome, looking recipe for Peanut Butter & Jelly popcorn. The finished product knocked their little socks off. I’m talking toe-curlingly delicious level. It was snack time and dessert all rolled into one. Even I enjoyed the stuff.

Fix a batch for your own pb & j fans and rock their world.

recipe originally from Something Swanky

Christmas Break. Two whole weeks with the sons without schedules or commitments. In true son’ style we made the second week a giant movie marathon. We watched one each day, and one each night. It was great qt snuggled up with my favorite guys. We enjoyed re-watching some of our long-time family favorites and found some new gems to add to our collection along the way. A week long double feature movie marathon meant a whole lot of popcorn. Who wants to watch a movie without munchies? After day 2, plain popcorn wasn’t cutting it. We decided to ‘spice’ it up. This meant a whole lot of experimenting with spices and new popcorn ideas. It was amazing. We might even have a new tradition on our hands. Each movie became it’s own unique experience with everyone looking forward to the ‘special’ popcorn. This week I will be sharing our new favorites that we found. Today is Cheddar Chili Popcorn, and it’s pretty darn tasty.

1. Separate kernels from popcorn, and place popcorn in a large bowl.
2. Melt butter in a microwave safe bowl.
3. Mix the cheddar powder, chili powder, and mustard powder with the butter.
4. Slowly pour the butter mixture over the popcorn, shaking the popcorn as you do it so one spot doesn’t get overly saturated.
5. Let the popcorn cool about thirty minutes before serving.

I love making spooky treats for the boys to enjoy and get them in the ‘mood’ for Halloween. When I came across this recipe for Monster Munch I made it immediately. It was a huge hit and has already become a new tradition. It made the perfect snack to enjoy while watching a Halloween movie marathon, including two of my personal favorites: Hocus Pocus & ParaNorman. Sweet & spooky, this Monster Munch is a Halloween must have.

P.S. Check out the cute little cardboard cartons I found to serve the monster munch in! Wilton makes and sells them in a four pack and they were just too adorable not to buy. Not pictured, but also included, was a mummy and a skeleton. They were on sale in the Halloween section of Kroger for $1! In hind sight I probably should have snagged a couple of packs. That settles it, back to Kroger I go!

recipe from A Pumpkin and a Princess