Fall desserts are often overlooked because they’re so simple. This homemade apple crisp is easy to assemble, but each bite is loaded with the flavors & textures of the season. Tender apples slices are bathed in a rich caramelized sugar syrup and baked under a golden brown streusel crumb topping. Served alone or with ice cream, it’s a simple old-fashioned style dessert that will immediately taste like home. 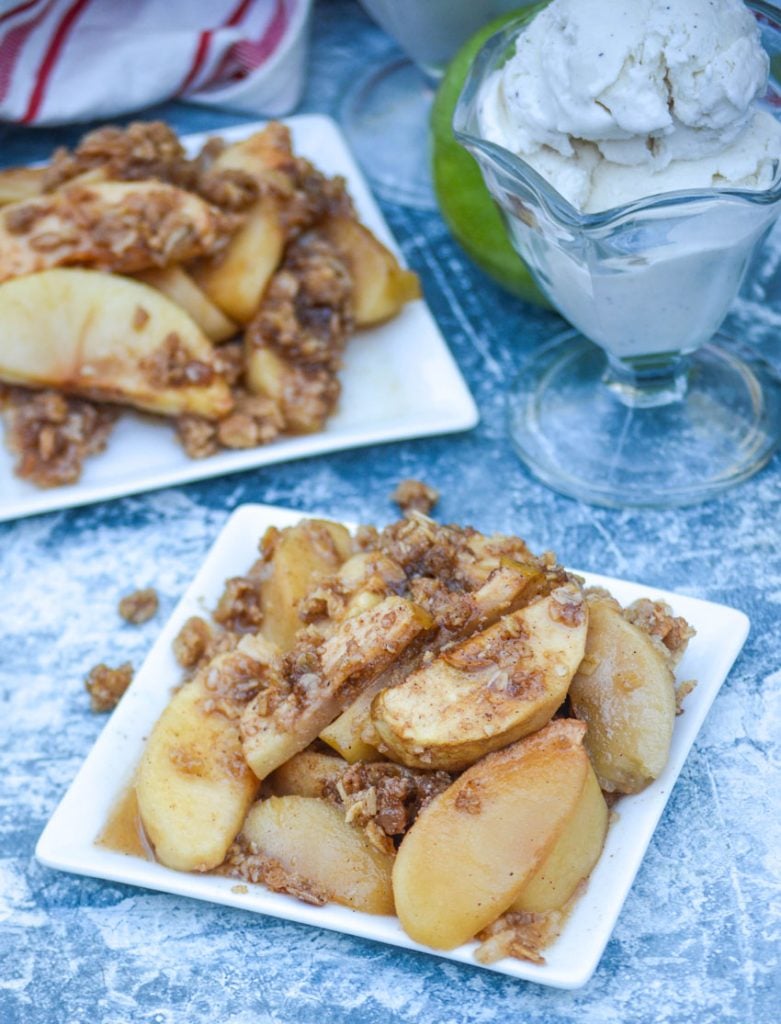 Apples are one of our household’s most favorite fruits. It’s pretty much a unanimous vote.

Most week’s you will find Costco sized bags of multiple kinds in our overflow fridge. They’re always on hand for a healthy snack the kids know they can grab without asking.

I love throwing them into easy recipes like apple nachos or even including them on a sheet pan charcuterie board.

Sometimes though, this profound love also leads to an abundance of this fruit that even my large family can’t get through fast enough.

Rather than leave them to rot, we throw them into easy large batch recipes.

One of my favorite ways to use excess apples will always be in my family’s delicious homemade apple crisp recipe. 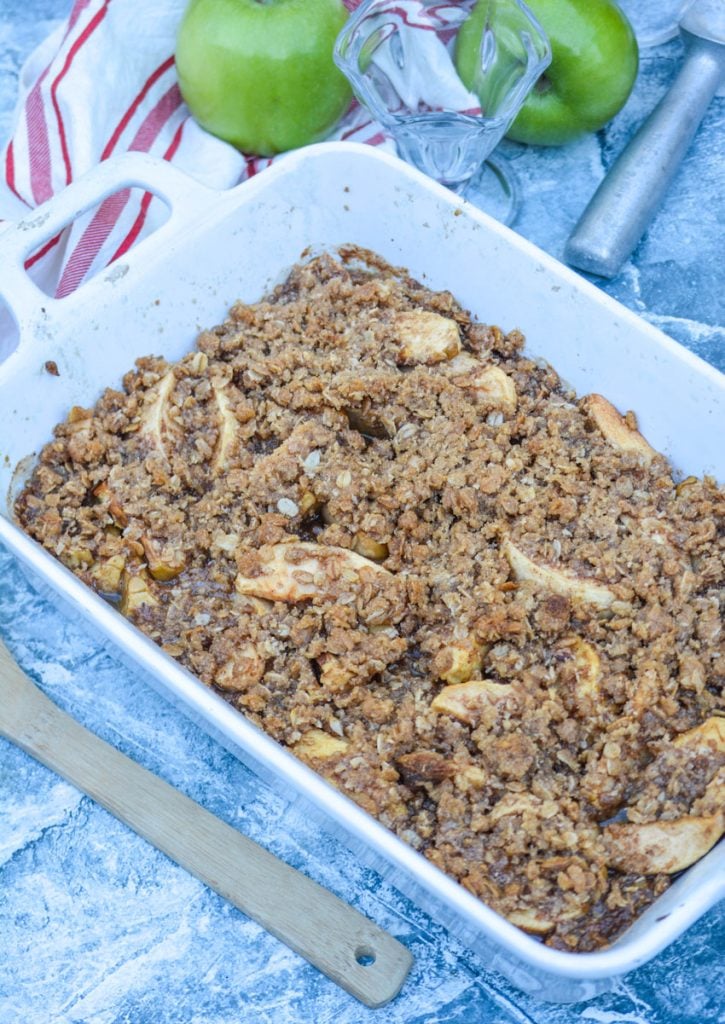 What Makes A Traditional Apple Crisp?

Apple crisps aren’t a new thing, my Grandma introduced me to them as a child.

I’ve heard some people call them ‘old fashioned’, but I’m not sure how far back they originiated.

They typically involve a bottom layer of peeled, cored and sliced or chunked apples that are baked in a thickened syrupy sauce, and topped with a crisp layer of streusel made from a combination of flour, oats, brown sugar combined with cold butter to form crumbles that crisp up into a golden brown topping when baked.

It’s a simple, but delicious dessert.

Like a cousin to a traditional apple pie. In fact, one common rumor I’ve heard has them originating as just that. 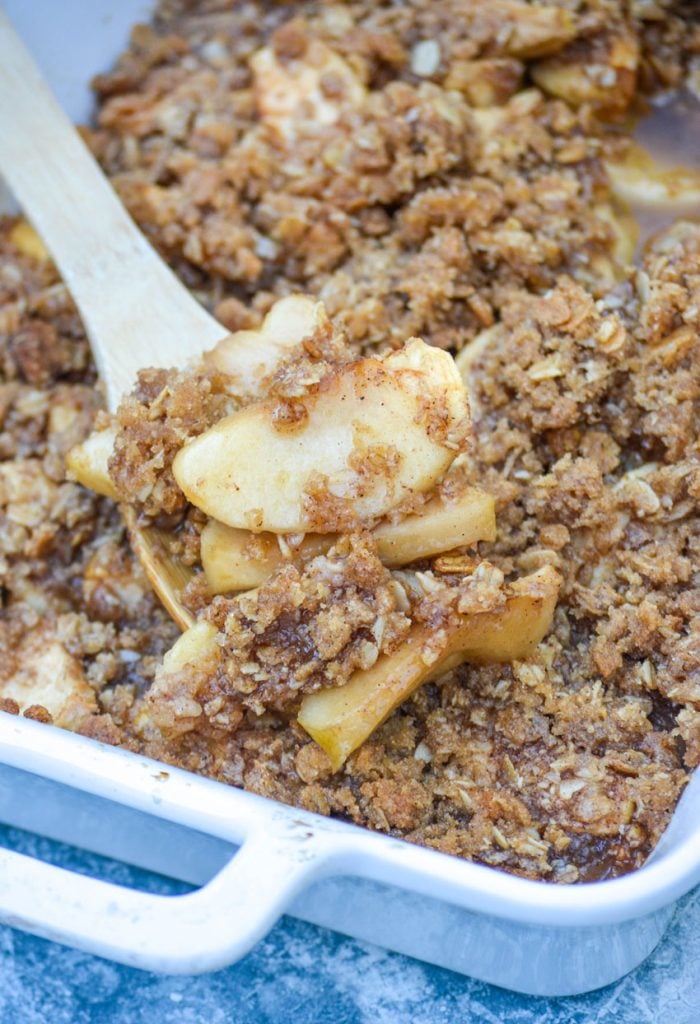 What’s In A Name? This Dessert Goes By Several

In Britain during the war when supplies were scarce, that’s when they rose in popularity for exactly that reason being called an apple crumble.

However they originally came about, the idea spread and has taken root deeply in Southern America.

In fact, depending on where you are or where you’re from, this traditional Fall dessert goes by many names.

While apple crisp and crumble were one’s I head growing up, many other’s are popular here in Virginia.

Those names include: brown betty, apple buckle, even a slump.

The names may all seem to cover the same dessert, but they have slight variations.

Such as whether oats should be included in the topping, if more flour should be added to the filling leading to a more cake like consistency, or even if the dessert should be baked or steamed.

For all intents and purposes, this homemade apple crisp recipe is for a 100 % traditional apple crisp.

However, you can easily adapt it to your own spin on one of the other slight variations if you’d prefer. It’s really hard to mess up an apple crisp. 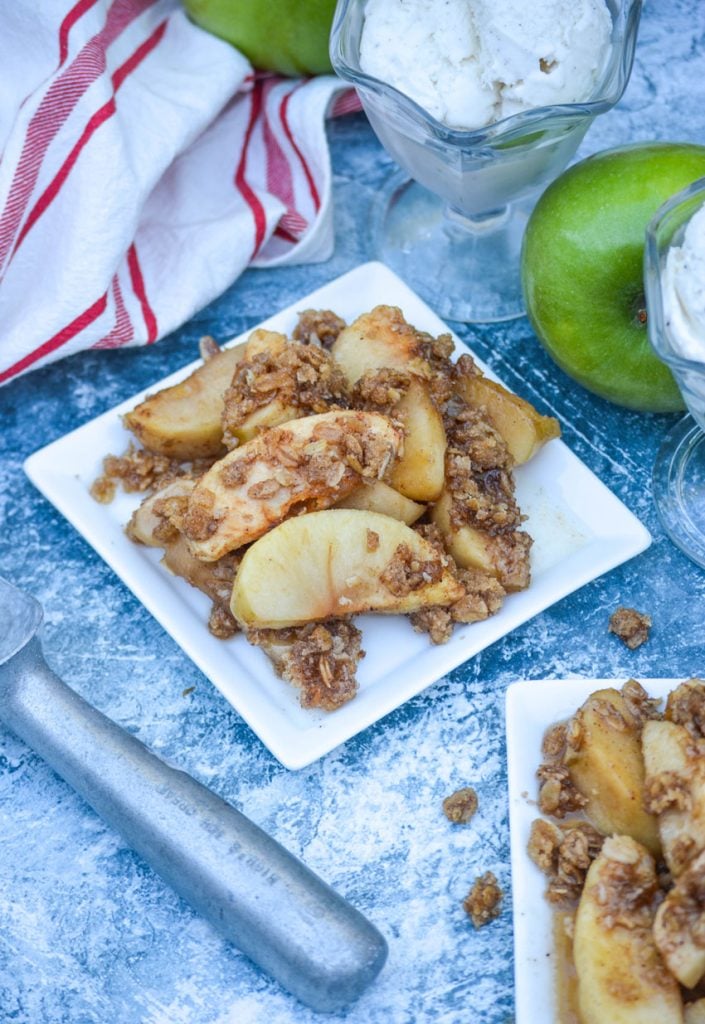 As with so many other homemade recipes, this homemade apple crisp couldn’t be any simpler to assemble.

In a large mixing bowl, stir together sliced apples, sugar, flour, cinnamon, a pinch of salt, and some lemon juice. Toss everything together to combine.

Lightly grease a 9×13″ baking dish with non stick cooking spray, or grease it heavily with butter- whichever way your Mama & Grandmama told you was best.

Then spread the apple mixture out evenly into the prepared dish.

In another mixing bowl, whisk together the struesel topping ingredients- flour, oats, brown sugar, and ground nutmeg until evenly combined.

At this point you cut in a stick of butter that’s been cut into small pats, roughly 1 inch each.

You can use your hands to mix the streusel together, mixing just until everything’s formed course crumbles, or you can cut it in using a pastry cutter.

I’ve gotten a couple of strange looks, and even more questions when mentioning a pastry cutter.

That’s what I was taught to call it growing up, but it’s not necessarily cooking vernacular.

It’s also commonly referred to as a pastry blender, or dough blender, and is used to ‘cut’ fats such as butter, shortening, or lard into flour to form  a dough.

Whatever name you know it by, or will choose to call it, it’s typically a stainless steel kitchen tool that consists of 4-5 very sharp blades connected to a single thick handle.

You use it by continually pressing it down in to the mixture, where it cuts the fats into ever smaller pieces while also forcing them to bind to the dry ingredients and form a crumbly dough. 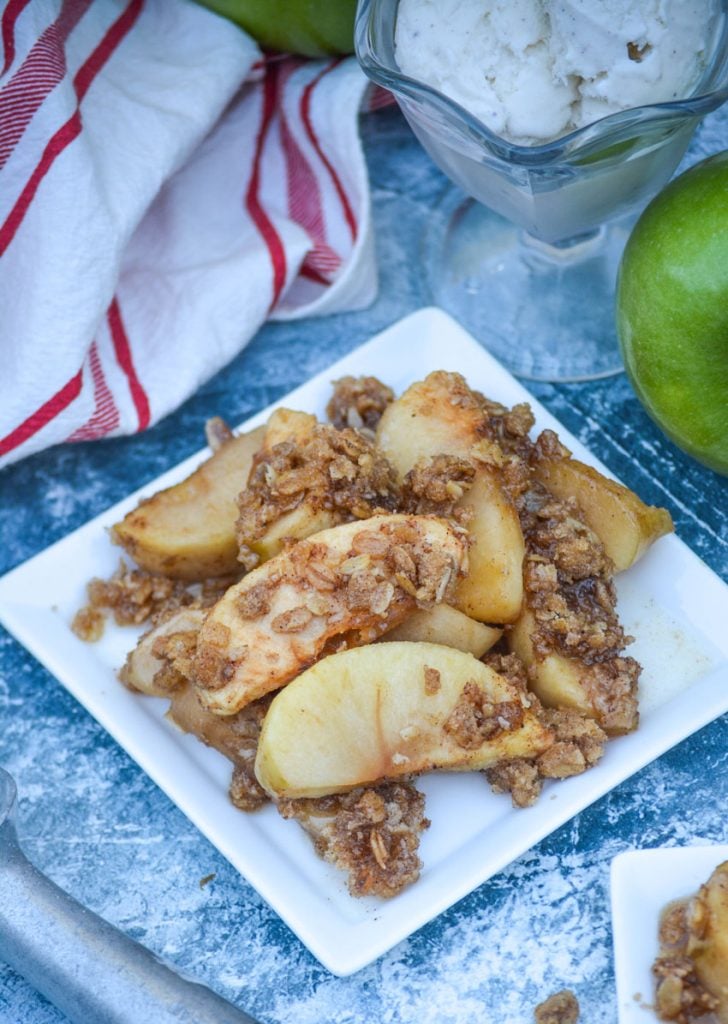 Once the crumble topping is prepared, sprinkle it evenly out over the apple mixture in the baking dish.

Bake the homemade apple crisp at 375 degrees for 35-40 minutes, or until the crumble topping is golden brown and the apple filling’s thick and bubbling.

Remove the apple crisp from the oven, and let it rest so that it’s no longer oven hot but warm when serving.

Most desserts are good all by themselves. If they weren’t, they probably wouldn’t have stood the test of time.

Still, half the fun of enjoying dessert is in the toppings.

As with any other dessert, an apple crisp has several different options to consider for toppings. Use one or two, or go all out and use as many as your heart desires.

Let me know if your family has or comes up with more creative toppings! 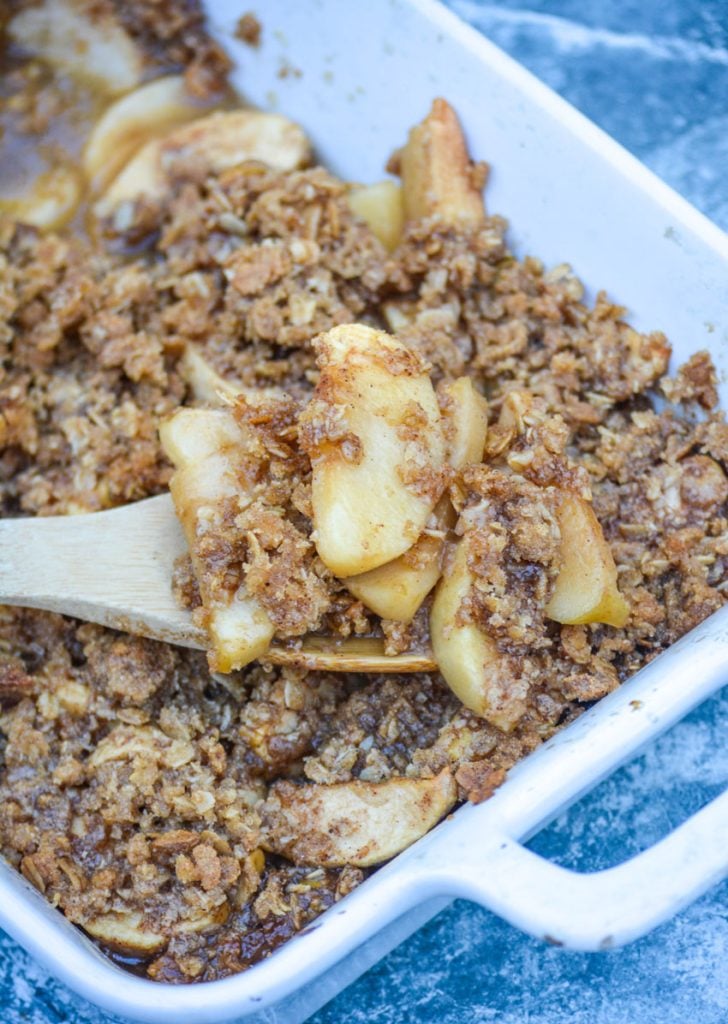 When Fall is in the air, apples are on the menu everywhere.

Check out these other apple themed desserts to try this season:

If you’ve tried this HOMEMADE APPLE CRISP RECIPE, or any other recipe on the site, let me know in the comment section how it turned out, we love hearing from our readers! You can also follow along with me on PINTEREST, FACEBOOK, and INSTAGRAM to see more amazing recipes and whatever else we’ve got going on! 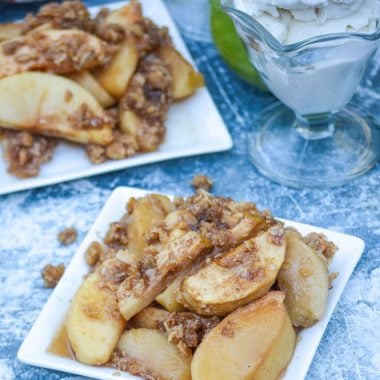 Fall desserts are often overlooked because they're so simple. This homemade apple crisp is easy to assemble, but each bite is loaded with the flavors & textures of the season. Tender apples slices are bathed in a rich caramelized sugar syrup and baked under a golden brown streusel crumb topping. Served alone or with ice cream, it's a simple old-fashioned style dessert that will immediately taste like home.
5 from 1 vote
Print Pin Rate
Course: Brunch, Dessert
Cuisine: American, Southern
Prep Time: 20 minutes
Cook Time: 45 minutes
Total Time: 1 hour 5 minutes
Servings: 9
Calories: 374kcal
Author: Meaghan @ 4 Sons R Us
Prevent your screen from going dark

For The Streusel Topping