This easy Italian style crockpot lasagna features both ground beef and crumbled Italian sausage. Our recipe is saucy with a blend of three cheeses stuffed between layers of tender pasta noodles bathed in meat sauce. This slow cooker version is just as delicious as a traditional recipe, but so much easier when it’s made from scratch all in the bowl of your slow cooker.

END_OF_DOCUMENT_TOKEN_TO_BE_REPLACED

Skip the delivery or carry out option, and get all the flavor you’re craving in an easy one dish dinner. This one pot pizza pasta recipe checks all the boxes. It’s easy to throw together in a single pot, making for a budget friendly dinner the kids will love that doesn’t make a mess. 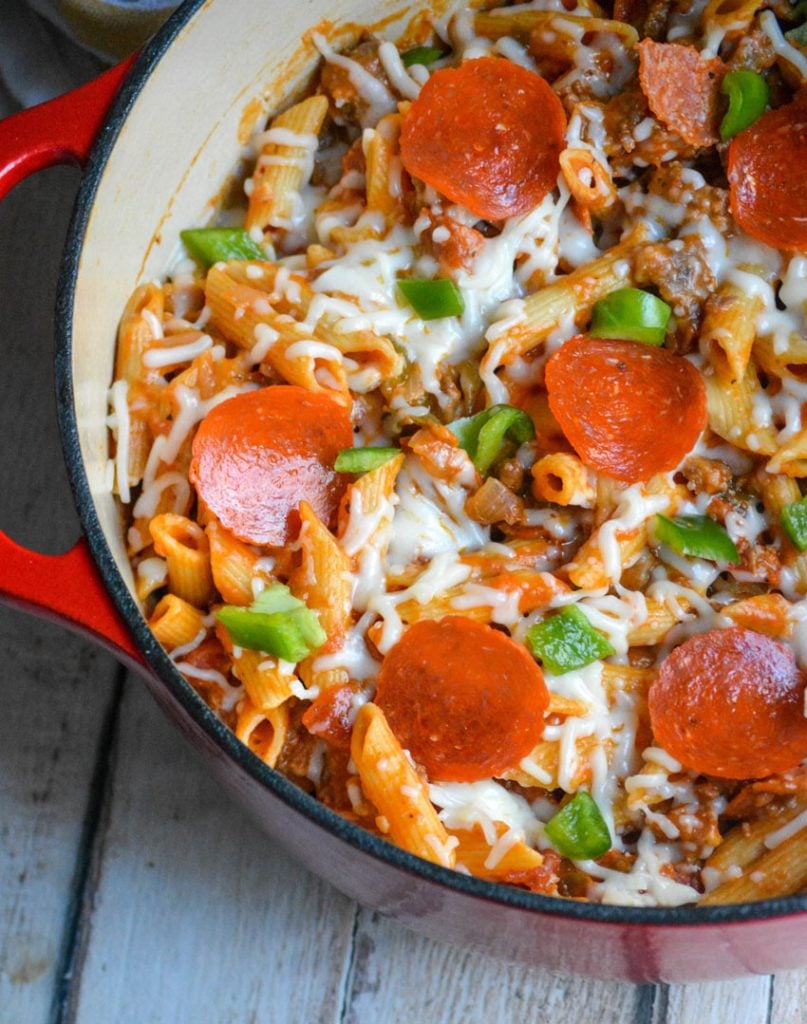 END_OF_DOCUMENT_TOKEN_TO_BE_REPLACED

Kick your meatloaf up a notch by adding pickled jalapenos, a cheesy cheddar melted vein, and slow smoking it to tender perfection. This Buttermilk Jalapeno Cheddar Stuffed Smoked Meatloaf makes it so you can enjoy one of your favorite ground beef dinners, infused with wood smoke flavor in every bite, without ever heating up your kitchen. 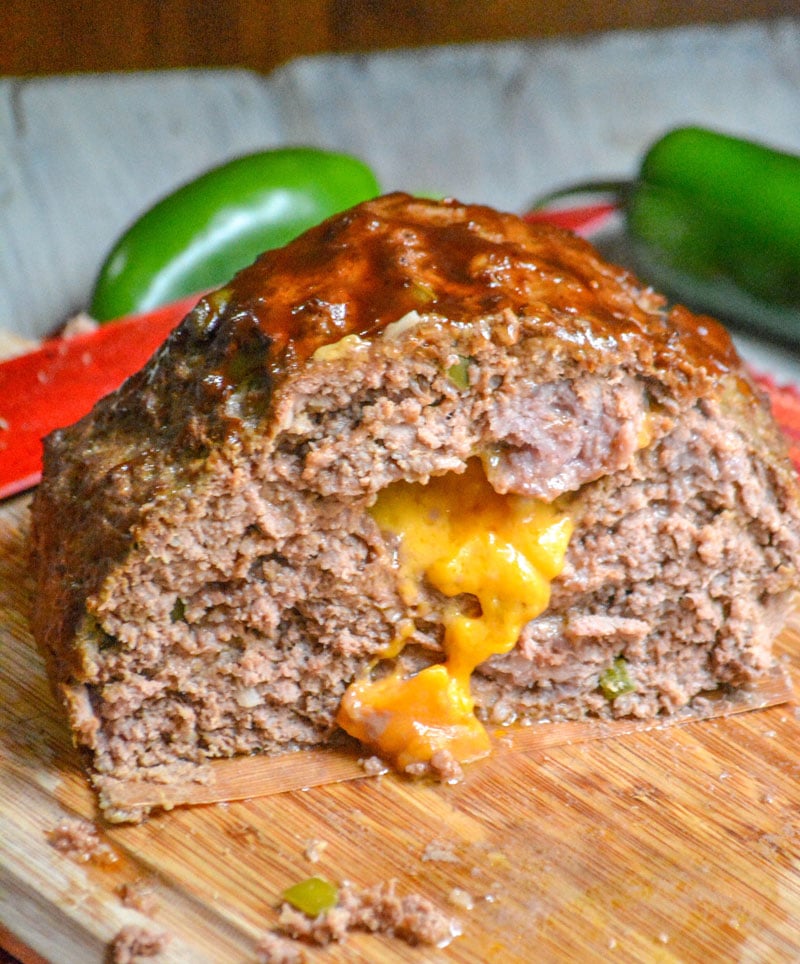 END_OF_DOCUMENT_TOKEN_TO_BE_REPLACED

It seemed like there was this annoying, persistent cough that ran through our whole household. It also liked to linger, taking each person about two weeks to get over. After numerous doctors visits, we learned to ignore it since they assured us it was nothing over and over again. So two weeks ago when I started coughing I didn’t really think anything of it. Even when I started having issues with a lot of muscus. Thought nothing of it. Probably a bad case of bronchitis and I put myself on a self-prescribed regimen of mucinex, pseudophed, and copious amounts of Vitamin C which seemed to help at first. But I just couldn’t shake it, even after a week of heavy meds, sleep, and all my usual go-to remedies. I was tired all the time. Just sitting up was exhausting. Breathing? If that didn’t send me into a convulsive coughing fit, it too was excruciatingly tiring. I just wanted to sleep. And sleep. And sleep some more. I could have slept forever. But, after two weeks of trudging along the worst seemed to be over. Yea, I was still tired all the time and still coughing, but it did seem a bit better. Then I woke up with this persistent pain in my back that continued to get worse over a 48 hour period. All signs pointed to a kidney infection, so I finished work and then bundled up and headed off to the ER on a Friday night. 6 hours and 5 prescriptions later, I was diagnosed with pneumonia. Well … that escalated quickly. The kids seemed to think I was on vacation and not sick leave trying to recover. Out of pity, and because it was the only thing I thought I could stomach, I made one big pot of soup to last through the weekend. You wanted something else, I hope you know where the kitchen is because I thought this Italian sausage soup sounded perfect. Perfect for breakfast, lunch, AND dinner.

Don’t let the word soup fool you though, sick or not. This is a complete meal in a bowl and kale is one of the healthiest vegetables around, high in vitamins K, A and C with both antioxidant and anti-inflammatory benefits. I was probably a tad bit heavy handed with the kale on this batch, but that’s where all the nutrients are and I was trying to stop that crud in it’s tracks.

This is also a ‘rough’ soup, so there was no need to feel the pressures of perfection. Which was good, because those veggies weren’t going to chop themselves and the precision required to give them a polished look might have cost me a finger at that point. It’s a rustic soup, and whenever you hear the word ‘rustic’ you’ve got my permission to hack away at the veggies. Relieve some stress. Take out your problems and frustration on the onion and carrots. Let them know you won’t take it lying down. Well, actually you probably will, because when you’ve got pneumonia, making a big pot of whoop-ass in your dutch oven will (not-surprisingly) sap the last reserves of your strength, but you get the gist.

Have you had Olive Garden’s Zuppa Toscana? This is the worldly Zuppa’s cousin visiting from it’s cabin in the woods. Heartier, healthier, and still just as flavorful. Whether you’re sick or not, this recipe serves up a heaping bowl of (guilt-free) comfort.

If you’ve tried this SWEET ITALIAN SAUSAGE SOUP WITH KALE, or any other recipe on my site, let me know in the comment section how it turned out, we love hearing from our readers! You can also follow along with me on PINTEREST, FACEBOOK, and INSTAGRAM to see more amazing recipes and whatever else we’ve got going on!

recipe adapted from The Housewife In Training Files

This biscuit bubble up pizza dinner cooks in a single casserole dish and tastes just like a meaty pizza chock full of sausage and sliced pepperoni with plenty of melted cheese. It’s a dinner the whole family will love, and because it’s ready in under 30 minutes- it’s a hit with both busy parents and hungry kids! 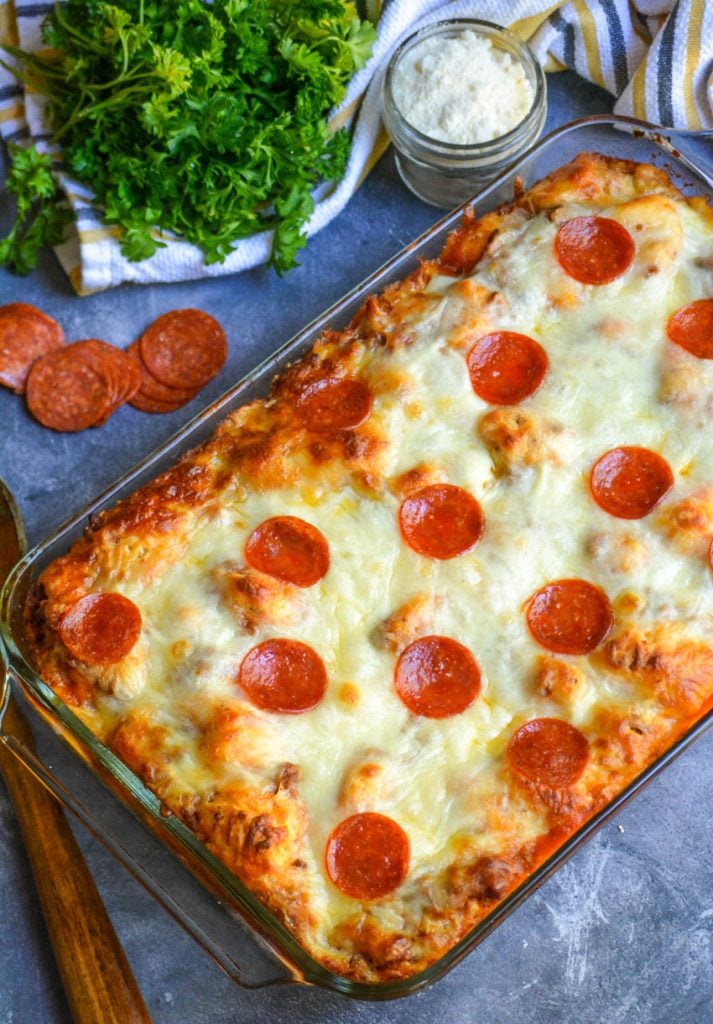 END_OF_DOCUMENT_TOKEN_TO_BE_REPLACED

This Italian drunken noodle is a delicious spin on the classic Thai dish. While it may have drunken in it’s name, in this recipe it means your meat, veggies, and pasta are just liberally bathed in a rich tomato based sauce. Get your noodle on, and give this hearty meat & pasta dish a try for your next family dinner! 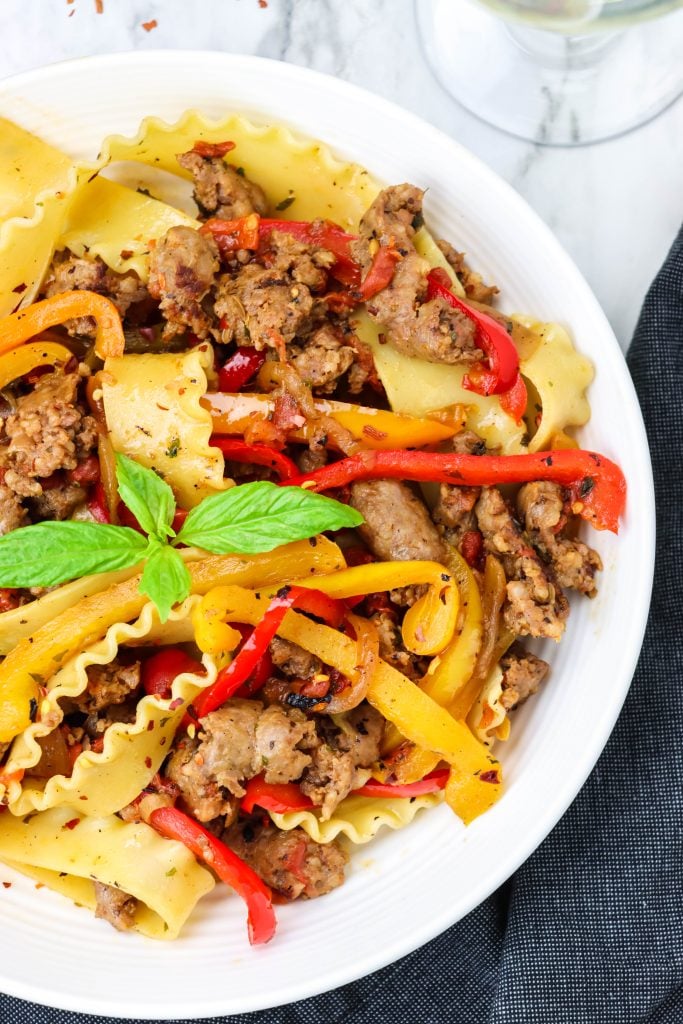 END_OF_DOCUMENT_TOKEN_TO_BE_REPLACED

Soup is an essential part of life, both as a way to treat a cold, and as a way to stave one off. For me, it’s also a genius way to get my kids to happily eat more veggies, especially with this hearty Warm Sausage & Kale Soup. Whip up a batch for your own family, and feel good about loading them up on a healthy meal, packed full of antioxidants, without a single complaint. 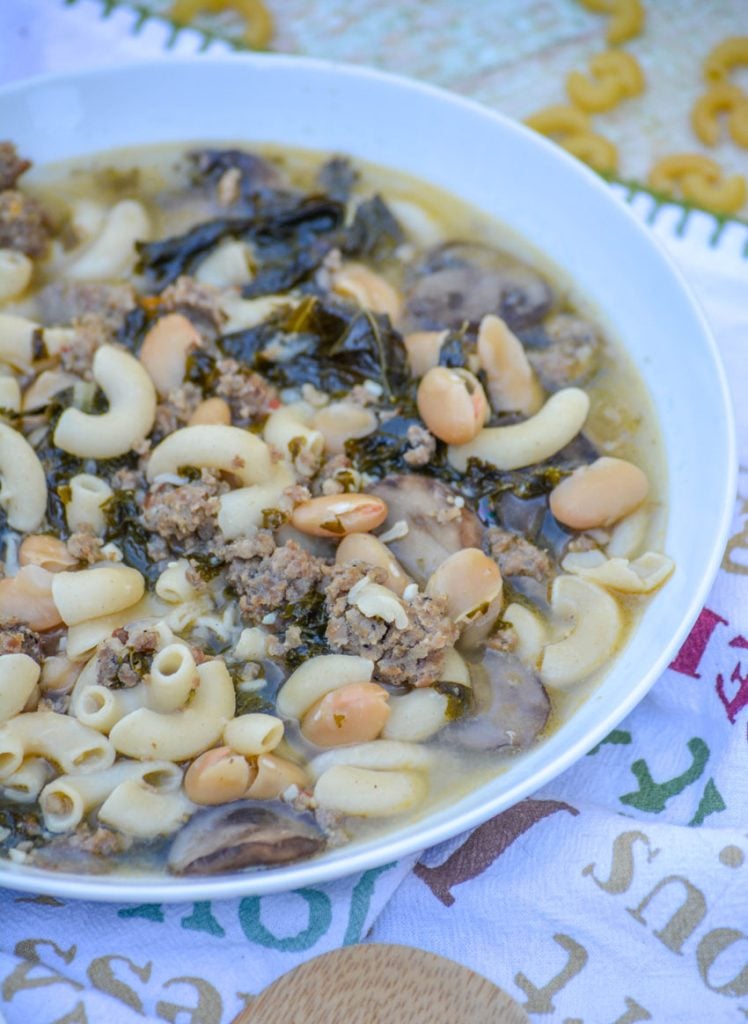 END_OF_DOCUMENT_TOKEN_TO_BE_REPLACED

This creamy Crockpot Pizza Dip is one of my favorite appetizers to throw together. It’s quick, easy, creamy, cheesy- and tastes just like pizza in dip-able form! 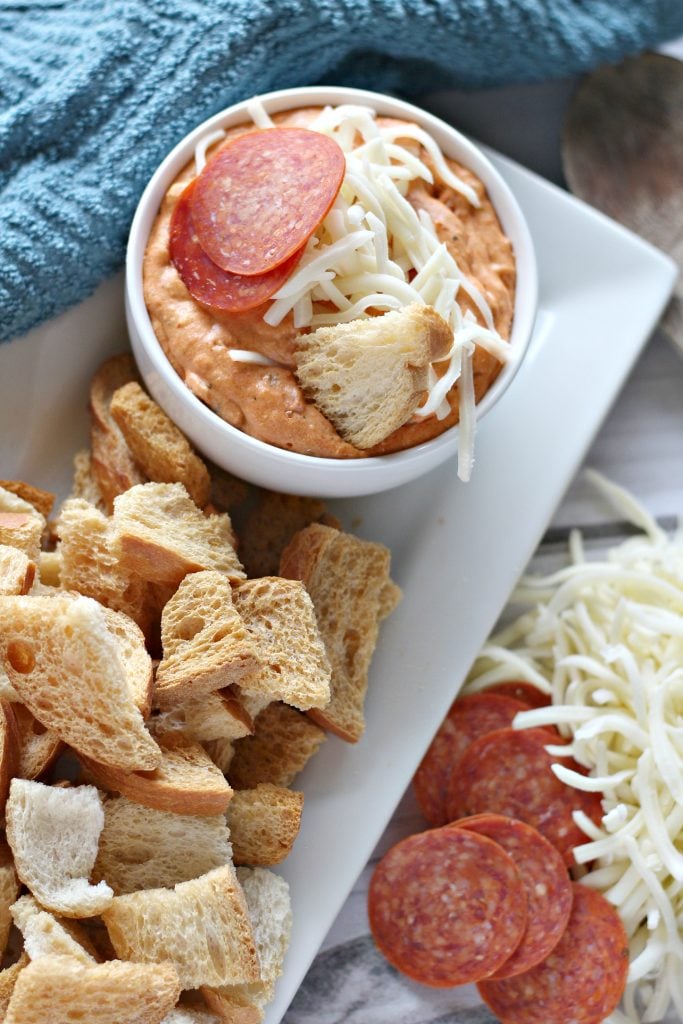 END_OF_DOCUMENT_TOKEN_TO_BE_REPLACED

One dish dinners are all the rage, for obvious reasons. This sheet pan Italian Sausage Potato & Balsamic Vegetable Casserole is a simple meal that’s bursting with flavor. Everything gets cooked in a single casserole dish, meaning every roasted veggie is infused filled with flavor. 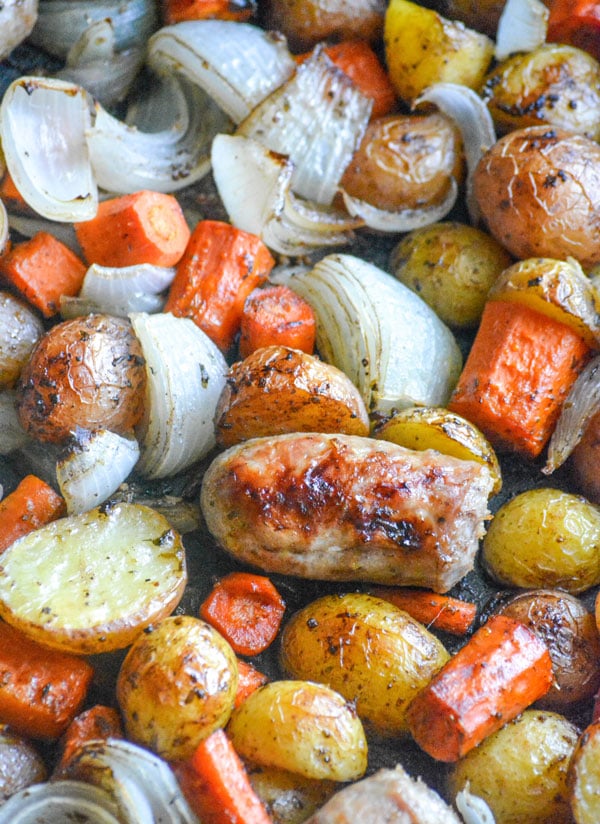